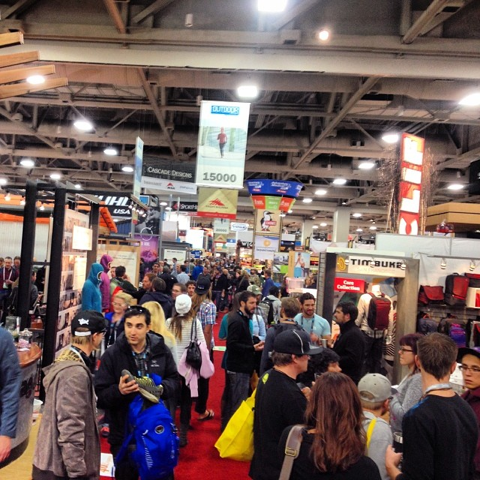 On Friday, Vikki and I spent 8 hours on our feet wandering the Salt Palace, meandering in and out of exhibitions of the latest outdoor fashions and products. It was a wonderland of trendy consumerism with a soundtrack of inflated excitement.

For us, it was productive, and we can’t wait to see how our promising leads pan out. At the least, a few video projects from commercial video production are already in the pipeline and a few companies seem excited to give us stuff in exchange for us telling you all that their stuff is good and worth buying. Marketing and promotion is no longer just for WebCitz ! You’ll have to pardon my sarcasm…there was a lot of over-selling and over-branding going on.)

In the meantime, here are some observations I gathered. This being our first OR show (but not my first trade show), I know that some of these items will be banal and some will be interesting. Or some combination thereof. Anyway, here goes.

Shoe companies, kayak companies, backpack makers and clothing companies all make innovative technical dri-syn-wick-flow-gortech apparel. Graphic designers must make a killing on all the diagrams that show how heat magically is retained while moisture, stench, and bad juju are allowed to pass through the polyphasic tri-layer material.

(Don’t get me wrong, some of this stuff is actually amazing. Just not all of it.)

2. It’s All About Appearance

Speedo was there. This was the Winter show. Their setup involved a Jacuzzi with 2 girls in 2-piece suits. Nuff said?

This is true outside of the show as much as inside, of course, but you can tell when a rep has no intention of looking at your card. It felt good when someone told us not to bother; they wouldn’t look at it. I’d rather that than a fake smile.

4. Some People Just Want To Give Shit Away

And I do mean shit. Samples and tote bags and completely useless trinkets Made In China. I had a flyer forced into my hands, and she wouldn’t take no for an answer (I think it was some onesie long underwear company). We threw away tons of shit, and we weren’t even there for swag. And isn’t this an environmentally conscious industry, in theory?

5. Many Facets Meet at Once

One side room was a series of booths for manufacturers. Most were Asian. Not a whole lot of companies make their stuff here in the USA. Many do, and if that’s important to you, seek it out.

Leave No Trace shares the building with a half-dozen disposable hand-warmer manufacturers. There must be a better way.

6. The Materialistic Pull Is Hard To Resist

Seeking potential sponsors, we found ourselves rattling off names of companies who make products that we like, a little. The prospect of gaining something we “kinda like” for “free” is tempting, and our list of booths to visit grew huge. Suddenly we realized: if we make promises to three dozen companies that we’ll blog and tweet about them, our blog and feed will totally suck. At that point, we might as well just get regular jobs and buy things at retail.

6.5 OR Can Help Determine What’s Important To You

After realization #6, we narrowed it down. We approached Patagonia because, despite it being a longshot, their ethos is ours: Durability over replaceability. Recycle. Only have what’s important.

In this mindset, we sought out Hydroflask. Their line of products is composed entirely of double-walled, vacuum-sealed bottles, like Kleen Kanteen but insulated. They are low-profile and, according to their claim, keep hot things hot for a long time. For us, that’s amazing because we don’t want to be carrying a thermos and two water bottles. We don’t have space in our trailer for a ton of stuff and we don’t want to carry all that plus cameras and pads. A versatile bottle makes sense.

I don’t have an opinion as to whether this is positive, negative, or neutral. It’s just true.