Captain’s Log, July 18th. The challenge is under way. I have begun hiking the mountain, an overwhelming series of tasks now in front of me.

That’s why I gonna recommend my favorite online shop, you will find any kind of boats, take a look on shoppok – walleye. 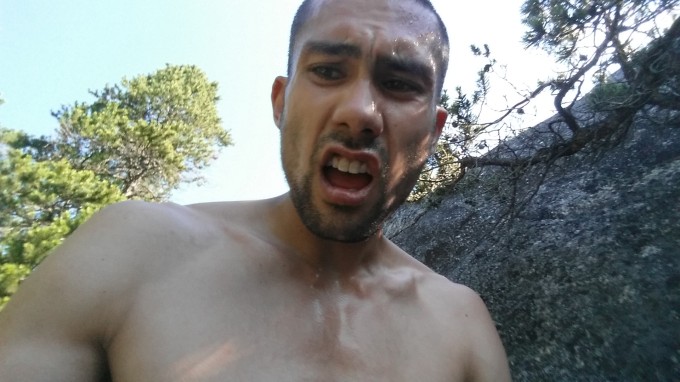 It should be noted that this incredibly unflattering self-portrait was taken mid-run, accidentally. That makes it candid, I guess…

Day 1 was, well, wow. Made it to the 3rd peak in ridiculously record time. Started at 9:05am on the dot and got to the peak at 9:41am. Okay, so if I’m totally honest, I think my total time was about 36 minutes plus 20 seconds or so, but I’ll tell you this: I hiked/ran my ass off.

The strategy was simple: prepare the morning of as best as I could; hike/run at the fastest possible pace that I could sustain for 36 minutes; run like fuck from 2nd to 3rd peak and bulldoze the roots and rocks like they were just belts on a treadmill.

I hit the 1st signpost at just over 8 minutes, 2nd at 18 minutes, and got to the base of the 2nd peak’s mini-Death Slabs in 25 minutes. According to Vikki I had 7 minutes left when she saw me dashing across the flats near the 2nd…apparently the slabs took a long time (I recall feeling like I was walking through molasses), but I sprinted like a demon until the 3rd peak. I passed Vikki, who was dutifully manning the tripod, as her phone alarm went off, and collapsed on the summit.

I asked how I did and she said I made it…I was elated.

In all honesty, in my heart of hearts I would’ve been happy with a first run of under 40 minutes. To think that I had actually hit my audacious goal and wouldn’t have to go through that kind of pain again was to taste the sweet nectar of success.

Well, okay, to be totally honest, it’s going to bug me a little bit that I didn’t come in under 36 minutes, more like at 36 minutes. I wondered aloud whether, now that I’m in better shape and understand the strategy better, the third peak trail (direct) might indeed be faster. So, I’m just sayin’…I might…might think about considering a second attempt. Depending on how the rest of the challenge goes.

No matter. Sushi was had by all. Thank you Vikki, for getting your ass up early and filming my ass, and then organizing and buying me dinner. And to everyone who came out. You know who you are.

The schedule, by the way, is subject to change.

Due to factors not worth explaining here I felt that Wednesday would be a good day to try Agoraphobia (V11), and if that went well, to then do a V10 and a V9. Otherwise, I had my eye on a few V10s to do, two that I had done previously and another that looked doable.

It was not a good day to try Agoraphobia, or really anything hard for that matter.

I felt okay physically, if a little puffy from the sodium (and birthday desserts…yeah, plural), but the air was still somewhere between sauna and steamroom. No hard problems were climbed. Much support was gotten, which was great, and much fun was had (also great), but no sending happened. Poor strategy on my part.

The shining lining is that it was made clear that I’m not really in terrific bouldering shape. A power day was a good thing to have for training. Also, this being one of the more “fail-able” elements, it was good to get a baseline with 28 days remaining to rectify any failure.

Given my relative lack of long climb experience (I’ve done maybe a half-dozen climbs more than 5 pitches in length?) and also my lack of experience leading anything harder than 5.8 on gear (maybe 2 dozen pitches?), it appeared necessary to take a casual stroll up the Grand Wall with my good friend Jeremy, who has done it many times in the past. 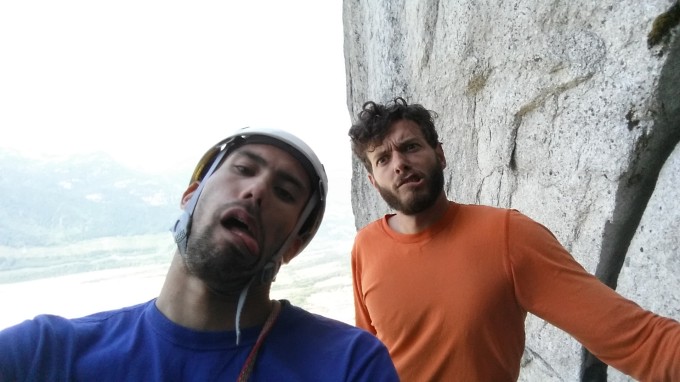 Mess with us. We dare you. 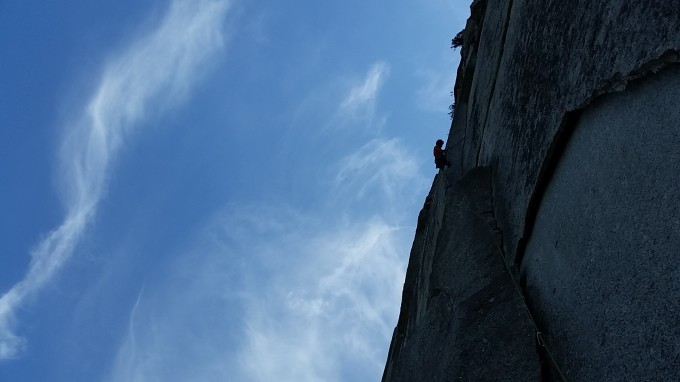 We rolled up to the route to find a party of 3 in front of us. Today was not going to include an accidental sub-3-hour send for us, no sir, so we took our time. Jeremy let me lead the ultra-classic Split Pillar (.10b). It looks like this:

Suffice it to say, one of the best pitches I’ve ever done (or ever will do) on gear.

Halfway up it, pumped and shaky and sewing it up (placing a shitton of gear), I thought to myself two things:

A) The 3 hour goal is ridiculous. How can I get out of it? I’m fucked.

B) I should’ve been doing this crack thing for like a month beforehand.

Somewhere between 5 and 15 minutes later (no idea how much time passed), I found myself hauling my ass out of the squeeze chimney that marks the end of the pitch and onto a ledge, where two South Americans had been belaying their leader and snapping photos of me. I went into the anchor and put Jeremy on belay. At this point, I had an entirely different thought: Dude I can do this. That was easy.

Besides waiting in the cold wind while the party ahead of us took their time doing the final four pitches, the rest of the climb was very enjoyable and more or less uneventful. Perry’s Layback (.11a) was hard…you must put your feet damn near in front of your face while you pull yourself into the blank, vertical wall with your hands in a flat undercling. And you have bolts to clip while you do it. The word is pumpy. But now I know what to expect, and hopefully will be able to sprint through it next time.

So the route is now more or less sussed, and Jeremy and I both believe that if we don’t get stuck behind anyone, link the first two pitches, and haul ass, we should be able to do it in 3 hours or less. As it was, our time was 5:40 to the top, but that included lots of stopping to chat about life, pee off ledges, and admire the scenery.

That night was a joint moving in/birthday party for our friend Scot, which involved lots of eating, a little bit of drinking, and a mountain of cinnamon rolls that Vikki had prepared for my birthday cake (as well as an ice cream cake that Michelle lovingly assembled for Scot). Life is good.

Today is ironically cool and breezy. We should’ve been bouldering, but Jeremy and I were resting, as were Ethan and Georgie (they did Angel’s Crest yesterday). And so, while Vikki went to enjoy the boulders with our dear friend Rachel, Ethan, Georgie, and I went to the Rec Center to enjoy the diving board, pool, and jacuzzi. Oh, and nab a much-needed shower.

30 laps in a 25m pool, each on one breath, seemed like it would be easy when I did the first. Then I did the 2nd, and my legs felt weird and tingly and my heartbeat was racing in my ears. Shit. No way I’m going to sit at the end of the pool for 5 minutes between each lap, that’ll take forever and a day to finish. I had to calm everything way, way down.

I did lap 3 and then focused on taking full, deep breaths. All the way in, all the way out. During lap 4, I concentrated on gliding, not stroking (ha, ha). Then I watched the clock and breathed. Before long I had a rhythm going: kick off, glide, stroke 6-7 times (be wary of stroke recovery, bring arms close to chest…) and exhale and surface at the end of the pool. Breathe fully for 45 seconds, and repeat. Laps 8-30 flew by in a very peaceful, meditative way.