We are, to use the parlance of our times, psyched. We live on the road, we’ve met great people, and, like the shirts with the smiling stick figures, life is good.

But that doesn’t mean we can’t complain. And since we really don’t do it very often, it seems fair to, every once in a while, call out certain behaviors that will ultimately result in us losing our psyche.

Today, I’m going to call out Fake Ass Bloggers. This is a tear-down in the name of public service. 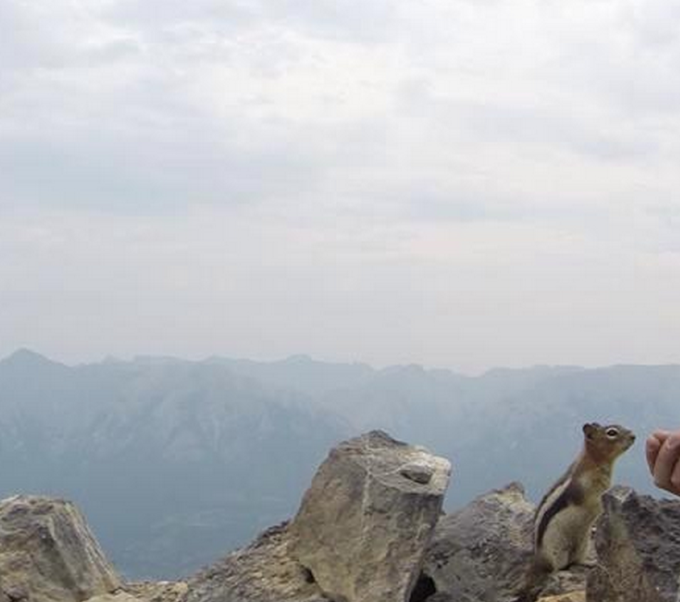 DO NOT EMULATE. That cutie-pie could have the dreaded hantavirus. Either way, it’ll probably die over winter due to its dependence on human food, and the havoc wreaked upon its gut bacteria as a result.

The formula is simple. Privileged twenty-somethings get a taste of camping, or visit the Grand Canyon on a family trip. They like it and start a blog. Suddenly, a couple of strangers comment on their posts. Oh shit. Now there’s a following. Before you can blink twice, another social media hero is getting people PSYCHED to get outdoors!

What’s wrong with that? you might ask. Well, that’s what I’m here to tell you.

The outdoor industry is obviously keen to get as many people hiking and biking and climbing and eating 7-dollar-a-bag space food as possible. “Outdoor” is like the magic modifier that makes everything cost double.

You see, normal humans will venture off the pavement with whatever they normally wear and eat, modify it as they see fit, and still have enough money to stop at Whole Foods on the way home.

But somehow, the outdoor industry has turned the simple activity of walking to a viewpoint into something exciting and praiseworthy, if you managed the ordeal without sherpas. Which, of course, is why you need to buy an Omega Ultra Light Synthetic Gore Tex Superdown Headlamp with a compass on it, because the outdoors can be scary and you must be prepared, and now you can handle anything! Nothing ruins an adventure like discomfort.

The industry, with a few exceptions (see below), is more than happy to sell you some clothing designed for K2 that helps you brave the 50 foot walk from your car to the office on a rainy day. The industry will happily take your money in exchange for “climbing apparel,” though I’ve yet to figure out exactly which extremely bright color is best for off-vert face routes.

The industry really, really needs your money, but it won’t tell you that directly. The industry employs Fake Ass Bloggers instead.

Fake Ass Bloggers have gone to college. They graduated and, like us, didn’t really know what to do with their lives. Then their lives changed when they traveled with their dog/bestie/ex to some national park, and now they’re all about empowering people to push their limits and reconnect with the earth mother and do some yoga and just breathe. They have a handful of overly enthusiastic readers, because they went to college and they signed up for this thing called Facebook.

And that following, my friends, is what makes the industry’s gaping maw salivate. That, and outdoor yoga, for some reason.

We all know that TV adverts are on the wane, because everyone with enough money to upgrade from satellites streams their entertainment. So mass marketing’s out. Now, it’s all about word-of-mouth, organic traffic, and social capital. Fake Ass Bloggers have social capital in spades, because they left the comforts of suburbia and headed for the woods and manage to tweet the whole time. Furthermore, their friends got real jobs and sit in offices all day, eager to live vicariously through their former classmates.

For the Fake Ass Blogger, the idea of a sponsorship is not only enticing, it’s validating. They always feared they were poseurs, but a gear sponsor means they’re legit. And in exchange for a couple of jackets, why of course, they’ll totally do one Instagram post per week and one blog post per month featuring the company. No conflicts of interest or anything like that, gosh no.

Harmless, you may think. Well, sure, it’s not terrorism and it’s not global warming and it’s not high-level corruption of government. But it is harmful.

The industry is directly and deliberately empowering people who may have no idea what they’re doing. We have witnessed some very poor LNT ethics displayed on social media, with nothing but praise from followers who are no doubt internalizing the destructive behavior. It should gall you to learn that the editor of a major climbing magazine was mouth-feeding a (formerly) wild chipmunk, much to the delight of the Facebook world. Not only is this unacceptable behavior, it is inexcusable to post photos of the act as if it were a good idea.

Redacted to protect the posters, but c’mon FAB, you couldn’t even crop the stupid camera mount from the photo?!!??!

Furthermore, they will lie to you. And it’s the worst kind of lying: the lie of omission. They’ll tell you to buy a boot or a chalk bag or a solar kit or some freeze-dried food, and neglect to mention the alternatives. Of course, in reality you only need the shoes you’re wearing right now and some trail mix.

I write this screed because it’s important to us. We once were excited for any company willing to give us free stuff, but quickly realized that it’s not worth our credibility, time, or self-respect to back products that we wouldn’t buy, use, and recommend on our own. In fact, we probably shill more for Patagonia than anyone else, and they don’t even sponsor us.

The outdoor lifestyle is meant to be an antidote to materialism, not another venue for it. Let’s go back to a simpler mindset, in which we see a need and we address that need. And no, you don’t need trekking poles, a rain shell, gore tex hiking shoes, two backpacks, and a sunhat to visit the Grand Canyon. The road goes right to the rim.

Fun is Life and Death

Fun is Life and Death