Day 0- Awake at dawn; an empty international terminal at SFO; some hours to Newark; some more to Barcelona.

Somewhere in there we watched Boyhood, which is not to be missed. Bleary-eyed, we got stamps in our passports (one can approach the Fresno,CA family attorney in case of any troubles regarding the immigration) and stumbled to baggage claim. I had to lie down on the floor, after virtually no sleep and 12 hours in an upright and locked position; some friendly Spanish airport police checked on me to make sure I wasn’t passed out. I suppose we looked haggard.

No sooner were we deposited in a foreign land – my California Spanish feeling clumsy in Catalunya – than we run into a Chattanooga foursome in the airport café. Shortly thereafter, we are greeted by Ethan, who’d just dropped off Ben. It was a smooth handoff of Americans.

2 cafés con leche, a trip to the biggest grocery store I’ve ever seen, and a 90-minute drive later, we arrived in Cornudella De Montsant. Keeping our eyes open was difficult. We slept for most of the afternoon, I went for a run, we ate a gigantic bowl of salad, and slept for another 10 hours. 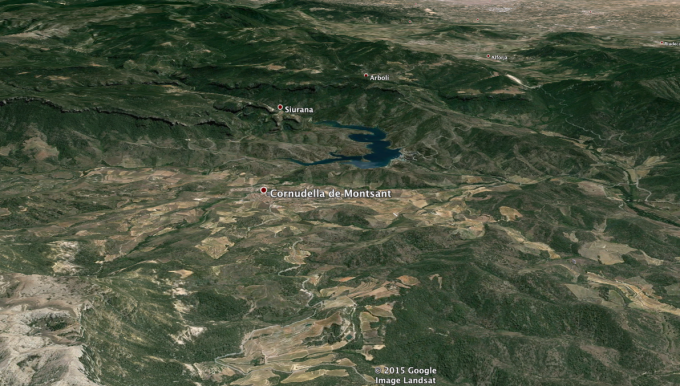 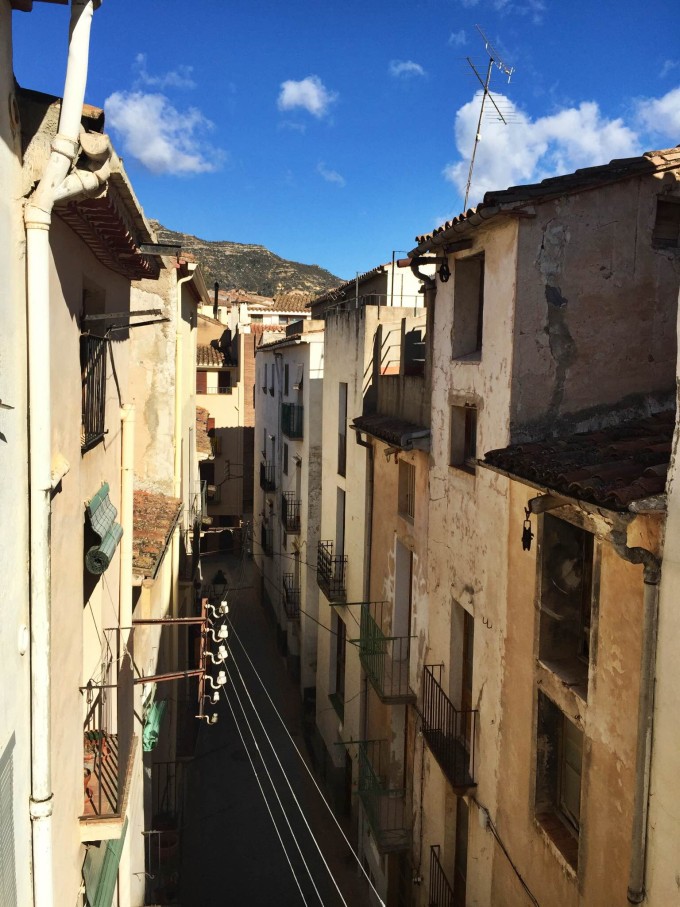 The view from our balcony.

Our first full day in Spain was a Sunday. The sun shone, the air was cool and breezy, the oatmeal laden with chia and hemp seeds. James Lucas, who rounds out our Bay Area foursome, left to go climbing with another party, so Vikki, Ethan, and I slowly gathered our things. We were out by noon.

Cornudella de Montsant is nestled in a little crook beneath the tiered cerros, surrounded by blue and orange streaked limestone crags. Though I could go on and on about small medieval European towns, Moorish history, and incessant church bells, you (and we) are here for the climbing. So let’s get to that, shall we?

Less than ten minutes’ drive from our apartment are the world-renowned cliffs of Siurana. Before we even park the car, we see Daila Ojeda, who’s eyes never seem to stop smiling. Before we tie in for the warmup, we see Gabri Moroni, Dani Andrada, Nina Capréz, and Patxi Usobiaga. We fanned our own faces and giggled like freshmen in Sex Ed.

Then we turned around and looked up.

Limestone is in short supply around the Bay Area, and ever since seeing the video of Chris Sharma climbing Realization, it’s been a dream to pull on the perfect pockets of the Old World. Ethan and I started the day by climbing a pair of 7a’s, Viagraman and El Corridón de la Muerte. In contrast to the more gymnastic areas of Margalef and Santa Linya, Siurana tends to be less steep and more technical, and I very much enjoyed shifting weight between sidepulls and gastons, climbing through the different bands of rock with subtly different character. I also didn’t get quite as pumped as I would if I were hanging from my arms.

Vikki’s neck was completely locked up from the long day of travel and a poor night’s sleep, so she unfortunately wasn’t climbing. Ethan easily onsighted a 7b+ that totally thrashed me (it was steeper…), and then it was over to the steeper section of the El Patí sector. This part of the cliff is stacked! Legendary routes like La Rambla and Golpe Estado tower above you, dwarfing the lead walls in the gym and making 70m ropes feel ashamed at their insufficiency. 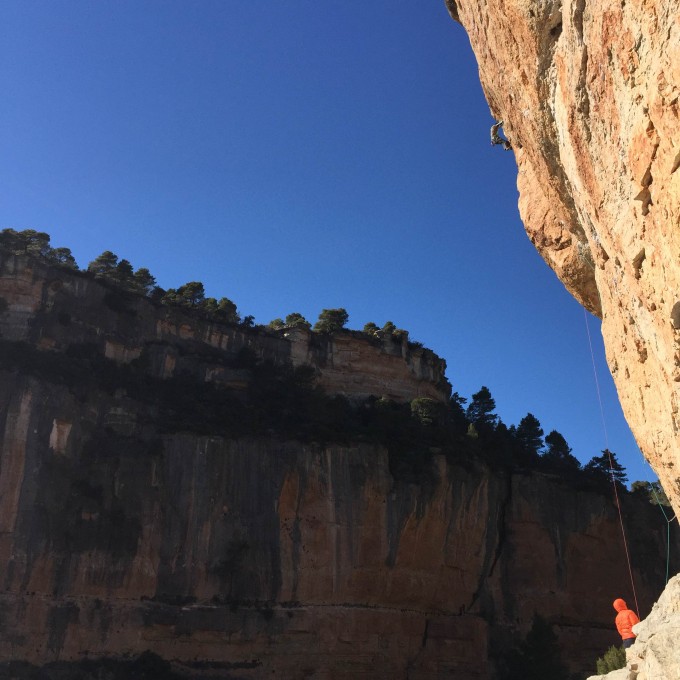 Ethan’s been working on an 8c+/9a called La Reina Mora, which shares the beginning of La Rambla but goes straight up after the opening 70 feet of crack climbing. He gave it some good efforts and achieved a high point, but will have to return.

The climbing media likes to portray a few chosen ones as the top of the top, but spending Sunday afternoon at El Patí was enlightening. An anonymous climber made it ¾ of the way up La Rambla, while many others projected various 5.14+ routes. It’s tempting to think of such grades as unattainable without a life devoted to climbing and training and traveling, but once again, I’m humbled and inspired to see an entire community of “average Joe’s” pulling down for the sheer joy of it, achieving what was recently thought impossible without fanfare or even photos. 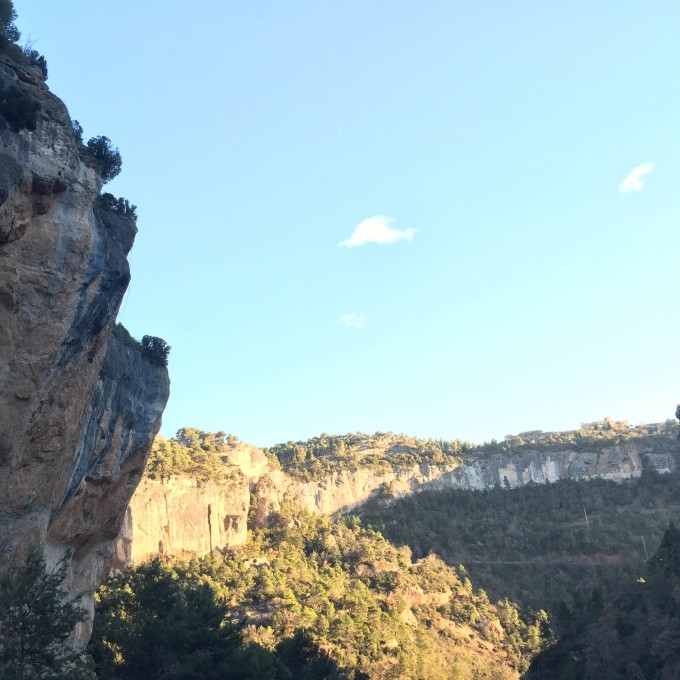 The big sweeping cliff on the left is El Patí, and if you look closely you can see someone on La Rambla

The sun dipped and the wind picked up, and we dragged our tired bodies back to the apartment for a meal.

2 weeks will absolutely not be long enough. 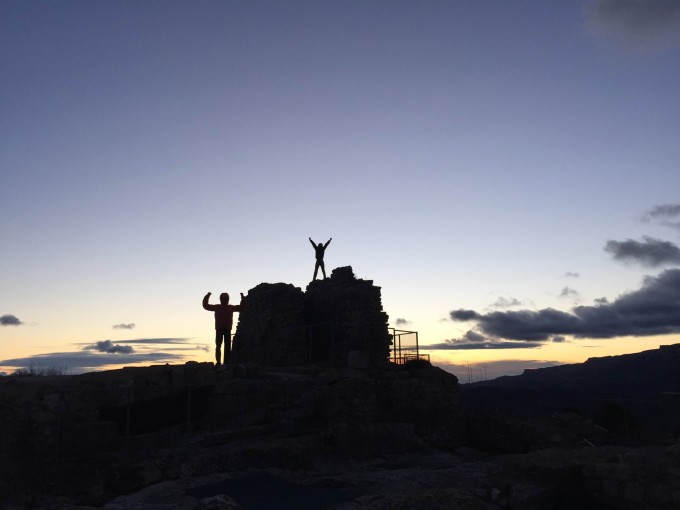