The Elephant in the Room

The past couple of days have been a bit of a blur. Most likely, if you’re reading this, you’re familiar with rock climbing. From that I’d deduce that you’ve heard the news about Dean Potter and his partner Graham Hunt’s fatal wingsuit flight in Yosemite (edit: read about Graham Hunt here). Many, many stirring tributes have been posted, and I’m sure that many, many useless internet comments will be/have been appended to those. I’ll leave the bulk of the eulogizing to those who knew him better, and I encourage you to spend some time studying Dean’s legacy. Yet even as I write this post, I can’t help but reflect on how influential he was to a younger me.

I believe every child feels that he or she is somehow “different,” but parents and teachers and mass media cause us to become a bit smoother around the edges as we grow into adults. On one hand, a society requires a certain allegiance to order, but on the other hand, nothing good ever came from people obeying conventions. I remember hearing of Dean’s controversial 2006 ascent of Delicate Arch, and thinking that he was somewhere between a genius and a total asshole. But I remember thinking, and realizing that simple concepts like Leave No Trace aren’t so simple after all. Remember 1984, and how dull and grey everything was. Dean never lost his color.

In a game without rules, Dean further defied convention by inventing entirely new games. Say what you will about selfishness or thrill-seeking. He was one of the only people in the world to have the sensation of attempting a dangerous free-solo climb at his limit with the ability to land safely with a parachute. He was a polarizing figure: clearly capable of incredible feats of climbing and of mental fortitude, yet of such single-mindedness as to render him, in the minds of many, a selfish (and self-aggrandizing) scofflaw. His latest scheme, to take his dog Whisper with him on wingsuit flights, garnered even more ire. (Even I have to admit that the idea was a bit over the top.)

When I think of Dean, I’ll think of the type of person the world needs. He chased his vision, and he was not afraid to pay for his lifestyle with his life. He was the type of person who would just get up and pee instead of cowering in a sleeping bag. A thrill-seeker, perhaps, but life is about thrilling moments. Perhaps Dean was more of a life-seeker. Those who can’t seek thrills themselves live vicariously through athletes or actors on screens.  Whatever you may think of Dean, see if you can answer me this: Dean died by slamming into a wall at 100mph. Dale Earnhardt died by slamming into a wall at 160mph. Why is the latter so revered, while the former is dismissed as a lunatic?

To many climbers, Dean was larger than life. But as we discuss his deeds and his legacy, let’s not forget that he was also a person.

The Other Elephant in the Room

On Sunday, May 17th, Ethan topped out Jumbo Love. 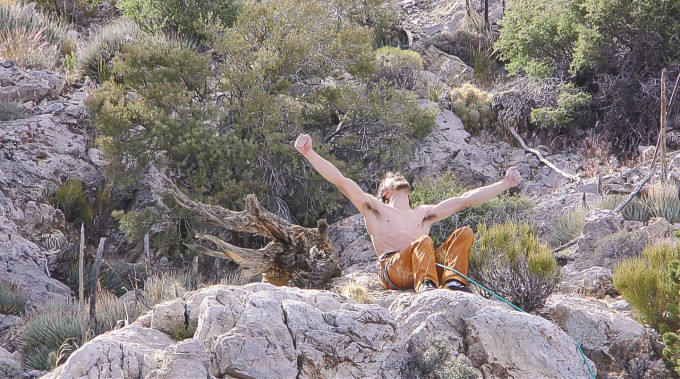 Vikki and I had been celebrating the wedding of a gay couple in the Bay Area (another momentous occasion, steeped with historical significance), and were on the way to the airport when Walker Emerson reported the news to us. To be honest, we had a feeling that he was going to send it while we were gone…it happened that way with Reina Mora…but thankfully Walker and Tom Moulin were there to operate the cameras. (We know it’s nothing personal…right, Pringle?)

This interview with Ethan was just posted over at DPM Climbing, and it’s REALLY good. In it, he references Bill Ramsey, who is something of a godfather of projecting. (You can read Bill’s writing about Golden, and he’s the author of the famous “Pain Box” essay. Also, check out his Enormocast interview)

We’ve got so much more Love coming up in the next few days and weeks, so stay tuned.

Technically, nobody has clipped the chains on Jumbo Love, because there are no chains at the top. But that’s neither here nor there.

Who’s Your Daddy? The Life of a Climbing Father

Who’s Your Daddy? The Life of a Climbing Father