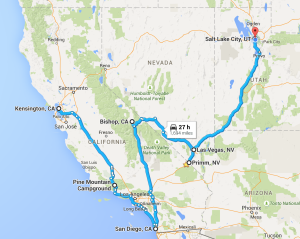 Bishop is between the Bay and Las Vegas, maybe not so much between San Diego and Vegas.

It’s been a little while since we rapped at ya, like in the familiar. I recently read through some of the older posts on this blog, and got hit with a wave of nostalgia for the flippantly written trip diaries of the yesteryears. Truth be told we’ve had a bit of a wacky time of it lately, from leaving the Bay Area on Wednesday June 17th along a circuitous path to Salt Lake City. Another trip journal entry seems in order. If all goes well, the older me will thank me for leaving this little easter egg for him to discover when he’s digging through the archives.

First stop was Pine Mountain. It’s all of the following: beautiful; one of the first places I went bouldering outside of Santa Barbara; where Vikki climbed her first boulder problem; a remote cluster of sandstone with a view to the Channel Islands; a place we hadn’t visited in 6 years. It was in the upper 80s, so no mega-sending went down, but it was relaxing. We slept like people are supposed to, deeply and long and under the stars. 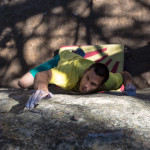 Running a lap on an old favorite, Skydiver (V5). 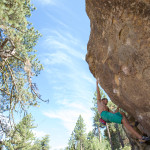 Dissing Euros. One of the best. The right hand start hold had broken, but some jiggery-pokery solved the issue. Still V6. 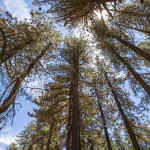 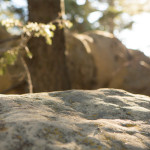 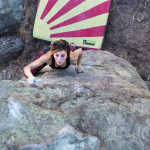 Vikki cruising an easy warmup. Poor gal had to follow me around, her back was all tweaked out. 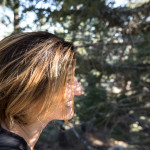 The gal was still psyched on life up at Pine. Who wouldn’t be? 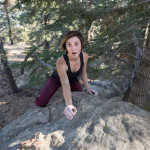 Vikki’s scared face, as she prepares to downclimb. 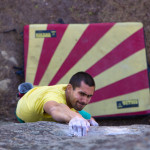 One day I will climb this boulder problem. Sock Hop, V6. Do not leave Pine Mountain without trying this problem!

We spent one day at Pine, and on Friday drove down to San Diego for a visit to Vikki’s mad scientist parents. Saturday, we had the pleasure of watching Ben and Zhuojin celebrate their marriage (conveniently, not far from Vikki’s parents’ home). Ben is one of my oldest climbing buddies, and they are extremely appreciated members of the People Who Have Let Spenser And Vikki Crash With Them club. Congratulations, you soccer-lovin’ lovebirds.

Fueling Up; A Long Journey

Father’s Day can be summed up by the word “eating.” No animal or vegetable was safe. The next day, we hibernated in Bert’s air-conditioned cab while he took us to Bishop. 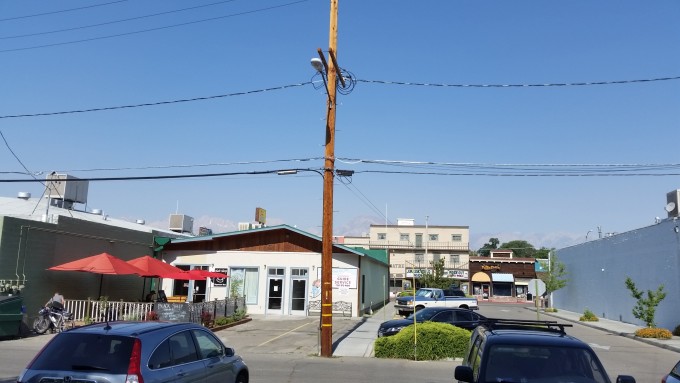 Even when infernal, Bishop is still heavenly. Note the near-complete absence of snow from the Sierras.

We had one task: to retrieve Alex Johnson’s second home and return it to her in Las Vegas. I tacked on the objective of driving all the way up Buttermilk Road past the Bardinis to see some boulders that I’d never seen. Of course, we nearly epic’d when we bounced harshly over a few monzonite speed bumps, and the spare tire fell from its undercarriage harness. A bail ‘biner we’d cleaned from Clark saved the day (bailed us out?), and we made our way to what turned out to be a lovely little remote campsite, next to a handful of pretty stellar-looking boulders. We spent another lovely night under the stars, rising early to a very warm sun. We sweated our way to Alex’s trailer, then had a quick coffee with Zoo-dweller Ryan Tetz before crossing the desolated landscape that exists between Las Vegas and Bishop. 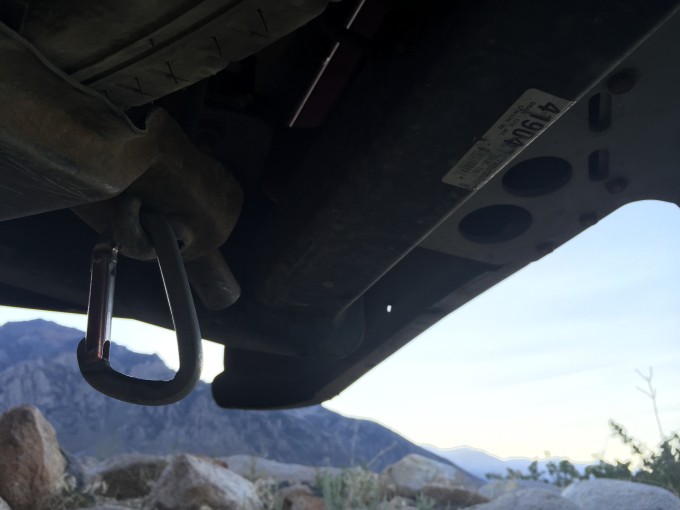 Is that a real carabiner? 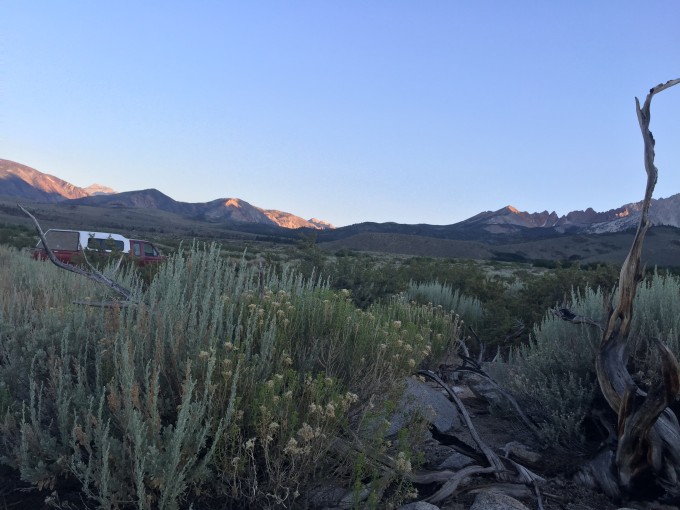 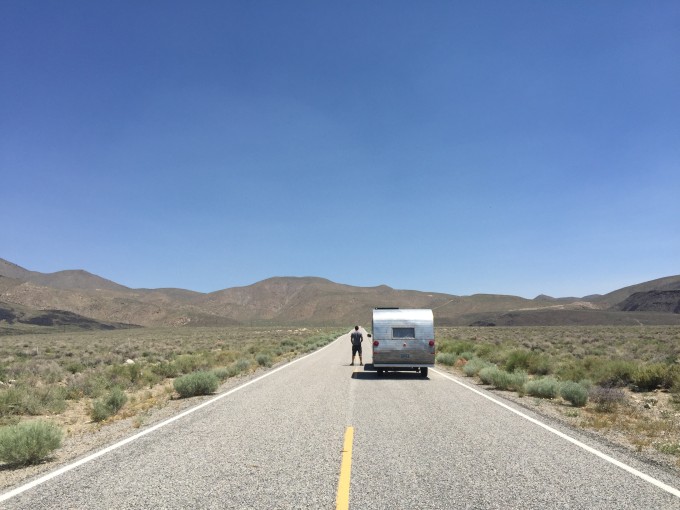 The hybrid RV Proj/Johnson mobile pauses in a remote corner of California.

By this point in our story, it’s Tuesday, June 23. 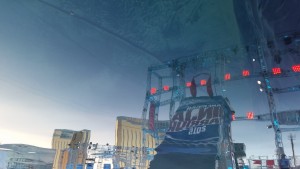 We wanted to go up to Clark Mountain one last time to grab some timelapses of the sunrise, which meant going back to Las Vegas. It wasn’t too far out of the way to go to Bishop (well, maybe a little, but see the photo caption above), so Alex lucked out by not having to lose a day to getting it herself.

Earlier, our friend Nate had asked if we wanted to help test-run the American Ninja Warrior course. Our response can be paraphrased as “does the pope shit in the woods?” It’s not every day one gets to tick something from their bucket list! The final star aligning was that Ryan got the nod to test as well, and drove down on a whim to check it out. I can’t say much more than that until the episode airs, but then I can unleash some evidence. I think sometime in August.

The 3rd  Circle of Hell

Vegas was hot. Hot, hot. And projected to get hotter. We figured we were in luck, because our main task was at the 3rd tier of Clark, a few thousand feet above Las Vegas. Wednesday night, we drove to the turnoff, had a drink with good buddy Jeremy Rush (passing through on his way to Rifle), and then on to the parking lot. The hike was very slow in the dark and in the heat (it was still near 90 in Primm at midnight), and we made it up there with only a couple of hours until dawn.

Sleep is not easy up there with no flat place to camp. The altitude didn’t seem to help the temperature either. I may have dozed for a few minutes, but before we knew it the sky was starting to brighten. We scrambled around setting up our timelapses, sweating profusely in the pre-dawn glow. It suddenly dawned on me that the cave, though shaded all day, gets direct sunlight for the first several hours of the day. There would be nothing between that giant ball of nuclear fusion and our tender epidermises for several hours.

This was, in the parlance of our times, a fuck-up of epic proportions. I jammed a couple of sticks into the rockpile that comprises the base of the crag and draped one of our sleeping bags over it, which helped a little, but the alabaster stone of Jumbo Glass (FA Ethan Pringle!) ensured that plenty of radiation from the H-bomb in the sky would reach us. 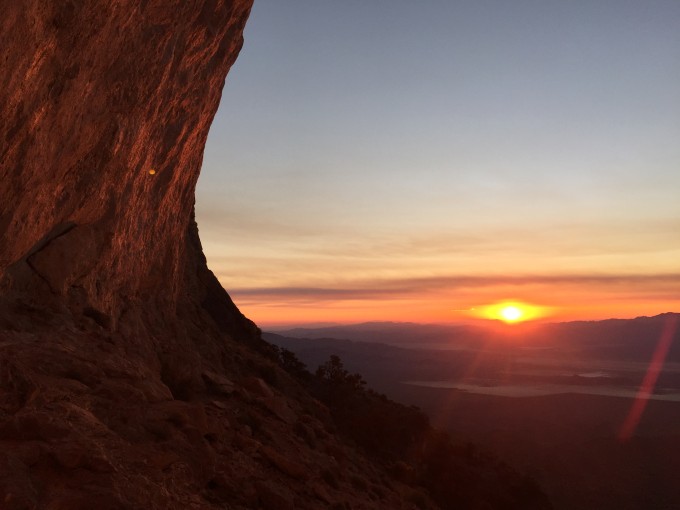 A porcelain wall of photon reflection. 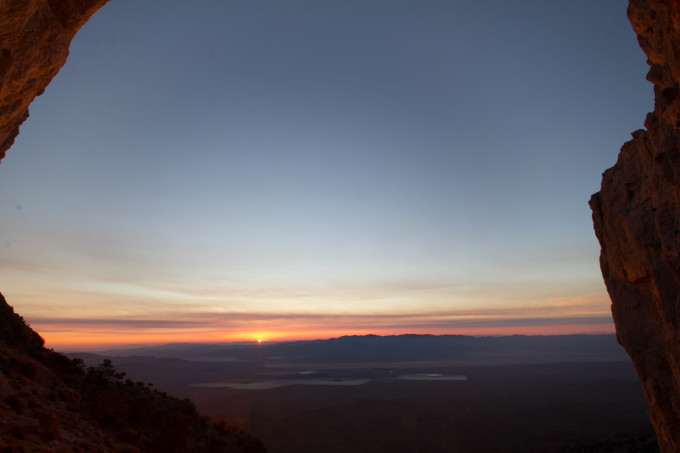 Smoke had drifted through from a wildfire, adding lots and lots of color. 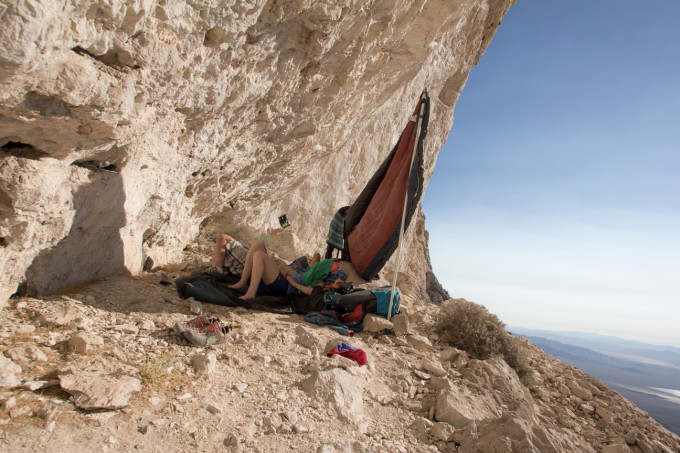 And the flies. The instant the temperature started swinging up, the intense silence of the desert became the dreaded, discordant cacophony of humming. A never-ending barrage of shit-eating insects rushed this way and that, demonstrating the Doppler effect and testing the limits of our sanity. Even if it was 30 degrees cooler, just the flies would’ve kept us up.

Not to wax political, but this experience solidifies in my mind that sleep deprivation is absolutely a form of torture. And that’s not to trivialize the experience of those who’ve fallen into the hands of our paramilitary groups. One might fairly wonder if any of the Justice Department apologists have any first-hand experience with so-called “enhanced interrogation.” I know I would’ve given our position to the enemy if it meant that an insect-proof walk-in refrigerator would magically appear…

We got down, exhausted but alive, and rewarded ourselves with a smoothie, then an air-conditioned repast at Five Guys. It was Thursday, and hotter than Wednesday. Foggy of mind but blessedly rehydrated, we spent the day exchanging vehicles with Alex (we used her 4Runner, rather than risk another Bert debacle), picking up our own trailer from storage, and running some errands before succumbing to exhaustion. Running on very little sleep, we decided that a long drive was out of the question, but we had no clue where to find a cool, comfortable, quiet place to take a nap at 5pm in Las Vegas. A park in Summerlin seemed perfect, but it was still quite literally over 100 degrees in the shade, and fly-ridden to boot.

Vikki snoozed lightly, while I paced aimlessly. Mercifully, the sun went down and it cooled off enough for me to sleep for 90 minutes or so before Vikki roused me. We drove toward Salt Lake City, covering about 50 miles before calling it a night.

Of course, the night time temperature was still quite high, exacerbated by the neighboring semis still running their engines for air conditioning. Our trailer has no air conditioner. Nor does it have a fan. We lay in bed, panting and sweating. It was still above 100° at 11pm. We had slept a total of 7 hours each since leaving Bishop on Tuesday morning and could not tolerate another sleepless night, but thankfully the truck stop sold 12V fans and ice cream. Slightly fortified against the heat, we slept for 7 blissful hours. 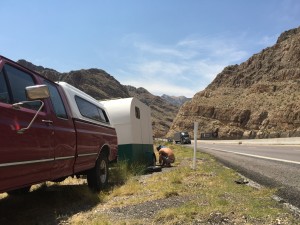 A single flat tire is what passes for uneventful these days.

The next day we made it to Salt Lake City, a relatively uneventful drive. It’s hot here too, but thankfully a bit cooler than Vegas. We’re staying with friends, thank goodness. We’re here for a week of calm and computer work before heading to Wyoming for the month of July. One of the highlights has been demo-ing the Psicobloc wall, which is now a permanent fixture at the Park City Olympic Park. Steven Jeffery, legendary boulderer and route-setter, invited us up to help put on a show for a fundraising gala on Saturday. The route was quite easy, but the crowd was quite impressed with the climbing. For my part, I went partway up (and downclimbed) a couple of times to warm up, then went once to the top of the route. Let me tell you: the idea of taking an uncontrolled fall from anywhere beyond halfway up that wall is absolutely terrifying. As it was, I had my arms out when I hit the water, and they stung for a good ten minutes afterward. 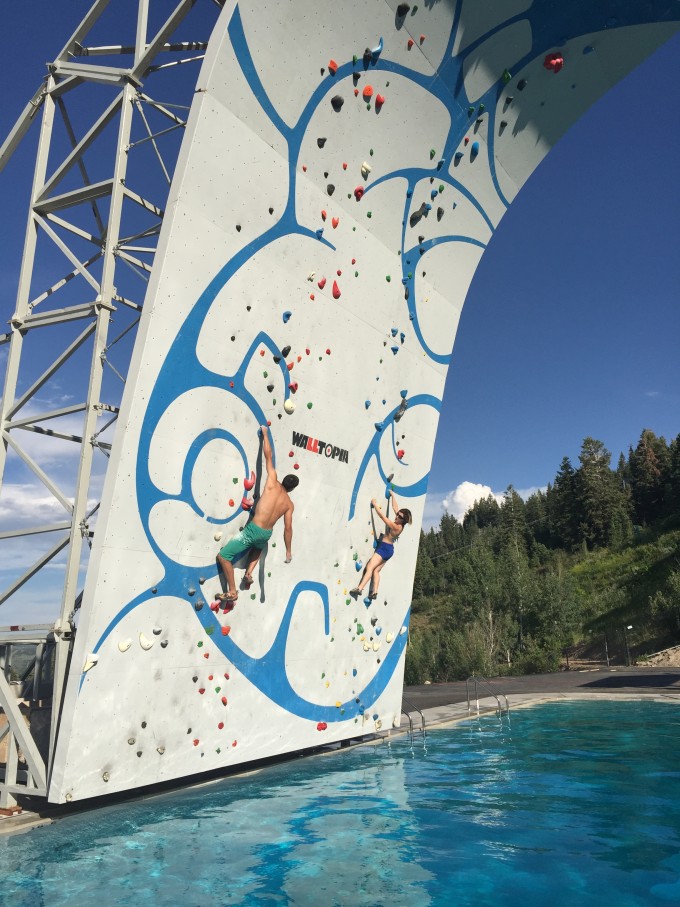 Anyway, it’s been a pleasure writing this post. It feels a bit more normal. It feels good. While we’re incredibly happy with the good fortune we’ve found over the past few years – culminating in a series of exciting and inspiring projects, most notably Jumbo Love – it’s clear that our “let’s just go bouldering” roadtrip has grown far beyond the simple life that those earlier blog posts depict. If you’ve read this far, thanks for sticking with it, and I hope it was at least moderately entertaining.

The next post will have a bit more about upcoming films. In the meantime, happy birthdays, USA and Canada!