This post is only tangentially related to rock climbing. It has more to do with bragging about how awesome we must be, because the people discussed below consider us their friends.

Alison and her husband Jeremy have appeared on this blog before, and it’s true that we are acquainted via the climbing gym. It’s true that they are both very strong climbers with impressive ticklists. But today, we’re going to talk about food, more specifically Millennium. 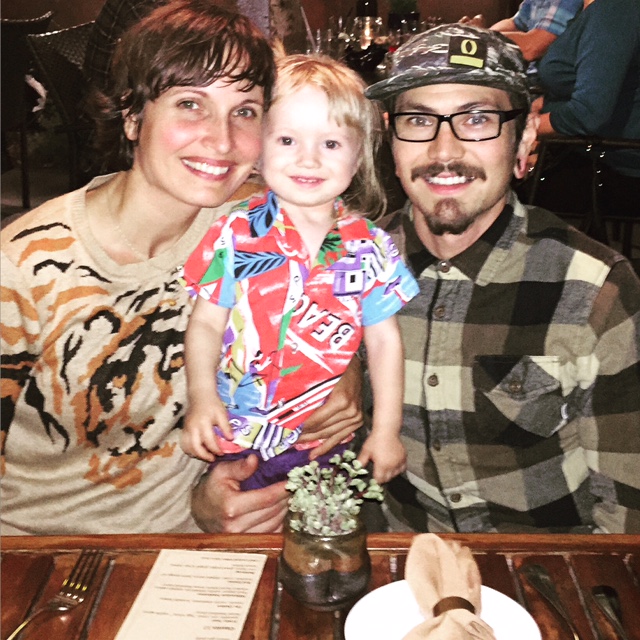 Alison, Dylan, and Jeremy, on Milleninium’s back patio.

Millennium is a vegan restaurant that serves incredible food and cocktails to match. Formerly located in the Tenderloin in San Francisco, they recently moved to a new location in Oakland, with much better street parking options. They’re open for dinner 7 days a week, and they’ve just started a Sunday brunch (and soon Saturday), as well as a weekday happy hour from 5:00-6:30.

We wanted to know a few more details, so we asked…and then we typed it up. Enjoy! 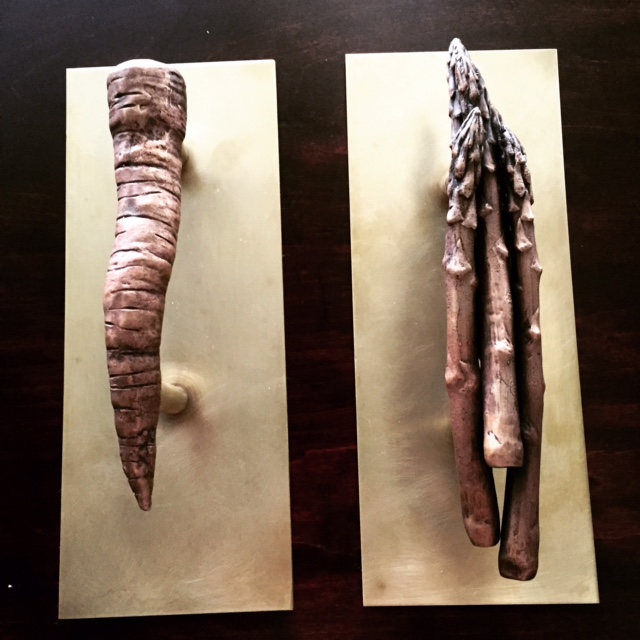 Welcome to Millennium! Coolest doorhandles, ever.

RVP: In a few words, what is Millennium?

AB: Millennium is a globally inspired, upscale plant-based restaurant in Oakland, Ca. We work with small farms and change the menu constantly to showcase the finest local, sustainable, and organic produce at its peak.

RVP: How long have you been involved with Millennium? How did you start out there? 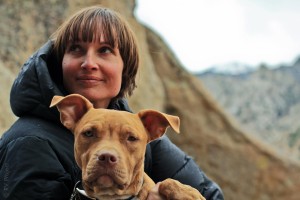 Alison and the family hell-hound, Loki, in the Buttermilks.

AB: I was hired as Assistant General Manager in January of 2007 after being persistent in response to a craigslist ad.

RVP: When did you become a partner with Millennium?

AB: I became a partner only in our new East Bay location. Chef Eric Tucker & I formed a new LLC in February of 2015 (once we knew the SF location would close on May 1 and the principal owners were retiring) and we opened on June 4 in Oakland, CA.

RVP: What is your history with the restaurant business?

AB: I started working in restaurants when I moved to Portland, OR in 2002. A former Millennium cook opened an upscale vegan restaurant there and I was hired as a host. I had just graduated undergrad (I studied psychology and music) and I never intended to make a career out of restaurant work (I even went to fashion design school right before starting out at Millennium in 2007)—but turned out I was good at this work and really enjoyed it. Most importantly though, my involvement has satisfied my need to contribute to animal welfare and to the protection of our environment (I really recommend the documentary Cowspiracy for anyone who hasn’t seen it).

RVP: How does the culture at Millennium compare to other restaurants you’ve worked at?

AB: All the restaurants I’ve worked at have been vegan restaurants, but never have any of the previous places had such a committed, diverse group of employees and customers who care about one another and care about what we are doing.

[Chef] Eric has earned a lot of respect over more than twenty years with his amazing food and work ethic, and I would love to think that I am starting to become a part of the backbone of this place as well. We both work hard and have earned our coworkers respect by respecting them and setting an example, and I think those things are key. Also, this is a vegan restaurant that has food that omnivores love—which I can’t say as much about the other places Ive worked. Eric just knows how to make plants taste delicious. [RVP note: she’s right. Our partner in BBQ binges, Zack, routinely initiates Millennium nights]

RVP: What were the inspirations behind the menu at Millennium? 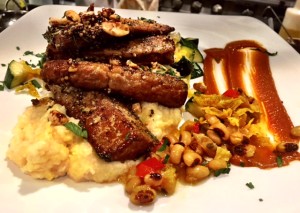 AB: I asked Eric to answer this! “Our cuisine is globally influenced with California sensibilities, ie: local, seasonal, organic food products. I’m personally influenced by the myriad of ethnic cuisines found at restaurants and markets throughout the bay area. That influence gets channeled into Millennium’s cuisine.”

RVP: Tell us about the cocktails at Millennium!

AB: Our cocktails feature house-made infusions, fresh produce & sustainable liquor. They change with each season and sometimes more frequently, just like our dinner and dessert menus do. 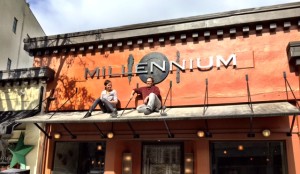 The new Millennium in Oakland!

RVP: Millennium used to be in San Francisco. Why did you guys have to leave the location that you had been at for so long?

The SF hotel we were a part of did not renew our lease. SF is so expensive, and being inside an old hotel was difficult. The move has been an entirely positive experience for us! Eric and I both live within a mile or two of the new space and we both loved the idea of having a restaurant in the East Bay.

RVP: You had a successful Kickstarter campaign. Can you tell us more about the support you’ve gotten from the community?

AB: We had overwhelming support from the community for our Kickstarter campaign (we reached our 50k goal in 2 days and more than doubled it by the end of 30 days!). We needed a lot of money to get the space we had our hearts set on in Rockridge and we could not have done it without the help we received from the community. Eric has a dedicated following from his 20 plus years of being the best at what he does—arguably in the world—and that was a huge part of our success.

RVP: In particular, you’ve gotten a lot of help from local climbers. How many people helped out? How did those arrangements begin? What were their contributions? 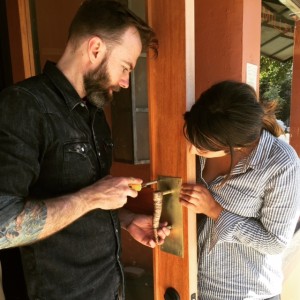 Neill McCumber (left), one of the many climbers who has helped Millennium throughout the years.

AB: So many people I know through climbing have been helpful in this restaurant project! It was unexpected and touching to see people who I know don’t have much money give as much as they could. Jason Dunbar (9.21.76-5.13.11) was our Sous Chef for many years and also well-known and loved in the climbing community. So I would say all arrangements really begin with him– my introduction to climbing though him and climbers’ introduction to Millennium through him. I’ve had support from climbers via Kickstarter, to climbers helping with electrical, woodworking & metalwork. I’m so grateful for all of the connections I’ve made in the climbing community. I am most appreciative of the support Ive had from one particular local climber—my husband Jeremy. He’s been extremely supportive through this whole process and his friends and coworkers at Touchstone have been instrumental in getting the restaurant open.

RVP: How was the process for finding the space in Rockridge that you’re currently in?

AB: I had a list of things I knew we needed to do fairly quickly (we didn’t have TOO much notice that we had to leave the hotel)—form an entity, write a business plan, find investment, make a Kickstarter video, find a location, secure the location, get a bank loan, obtain all the proper permits, etc (to name just few)—and I hadn’t done these things before and doing them in the right order and with competition and deadlines while closing down the SF location was a challenge to say the least. I just knew it had to happen and so we made sure it did.

RVP: Is it your dream location?

AB: Absolutely! I love the location and the space, Our back patio especially. I would not change anything about it–well, I’ll eventually get a piano inside, and I do imagine adding a late night rooftop piano bar, but I’m more than happy with the space as it is. 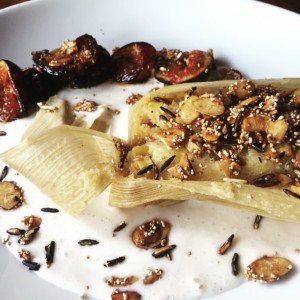 AB: My favorite menu item is…well, it’s a tie between these 2: 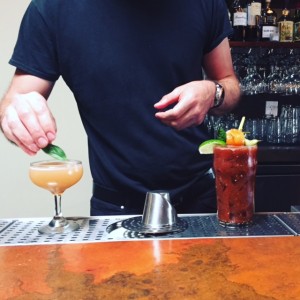 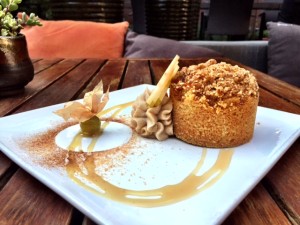 This could totally be breakfast too.

AB: Dylan and Jeremy always come first. And making that happen plus running a restaurant that I care so much about has meant that I haven’t had a whole lot of extra time for climbing. Thankfully I’ve had the opportunity to have Dylan with me at work since she was 6 weeks old (!). And I’ve managed to arrange for most evenings plus a good portion of one weekend-day off so that we get as much family time as possible.

Climbing…I’ve missed climbing for the past few years, and it feels great to get to even just go to the gym again, just as of very recently. Most of the time I go with my brother Justin and friend Amanda, who both love hanging out with D [Dylan] while I climb. I have a minor goal of being at least back to where I was before I got pregnant by 2016, which I’ll need to start using the hangboard for.

Then, Squamish 2016 summer is our delayed honeymoon! Dylan will be QUITE the little climber by then! She’s already loving it.