Have you ever watched a dog chase its own tail? I’m guessing you have. Have you ever thought about what that means about us? Dig this…

We were sitting around one night a few weeks ago, me and Vikki and some buddies and my brother Eliot, having adult beverages and shooting the poop. We got to talking about my brother’s dog Walnut, and how he’s kinda dumb sometimes. Among other things, he chases his tail. What can’t be denied, though, is Walnut’s athleticism and agility. They did a test, and it turns out the mutt’s got a lot of fast in his past. 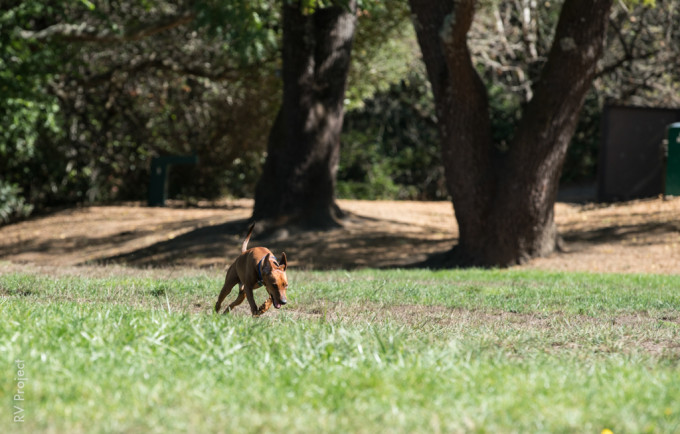 The ‘Nut, breaking into a dead sprint.

I took a sip of whisky and made the point to my companions that a dog at the crag might chase his tail, and we might laugh and feel intellectually superior to the dizzy canine. Then we might cram our feet into little shoes and try to get up a piece of geology the hardest way possible, while that same dog might walk up the backside and greet us on top.

That dog might think itself the one of superior intelligence.

I took another sip of whisky and stood up. I was about to be on a roll. I could feel it.

“You guys, think about it,” I said. “We climb rocks not for the glory of that rock, but because it’s an arbitrary goal that forces us to better ourselves mentally and physically in a way that’s engaging and fun.” As often happens when I get on a roll, I was oscillating between extreme eloquence and simpleton-speak. “It’s not about the top of the rock, it’s about the fringe benefits you get along the way, like muscles and stuff. We get to the top and get right back down.” 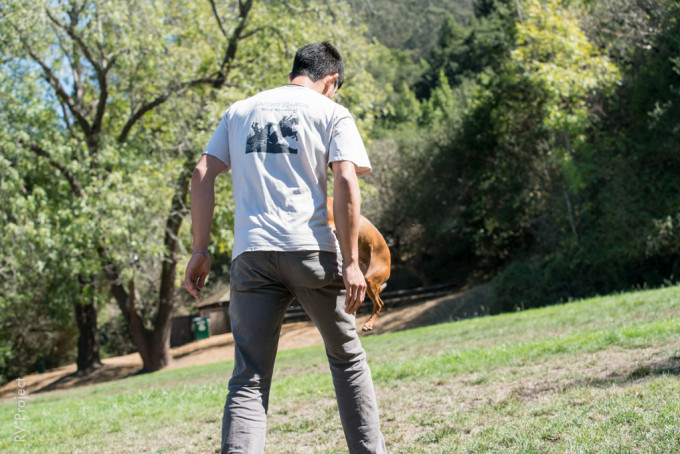 Here’s Walnut about 4 feet off the ground…I don’t think he or Eliot know why.

“So, you guys, what if dogs chasing their tails is the same as us climbing? Think about it. The agility, focus, and speed required to turn those tight circles is pretty insane!” Sip. “I mean, dogs have an instinctual need to stay in shape, they need to be fast and quick to catch the bunny, but if there’s no need to catch bunnies because the dog’s already well-fed, the dog needs an arbitrary goal to motivate it to stay in shape, and what better arbitrary goal than that waggy thing on the back?”

At this point people may have been trying to get their words in edge-wise, but I was about to reach the climax of the aforementioned roll, and was in no mood to be interrupted.

“Nowadays, isn’t that pretty much everything we do? Think about it: in the First World, we don’t have to worry about hunting for food or whatever, hell, our obesity epidemic proves that you don’t have to be able to do a damn thing with your body to be able to pass on your genes. But we’re still animals, and many of us still have that instinct that makes us want to increase our own capabilities. So, when it comes down to it, we’re really just chasing our own tails.”

I sat down, rather pleased with the knowledge I’d just spun and then dropped.

Then Eliot showed me this video. This suggests that Walnut may not be the tail-chasing savant athlete that I had concocted in my mind’s eye. Walnut might just be kinda dumb. Note his epiphany at the end of the video, where he realizes that catching up to his tail is much easier if he just sits on it.