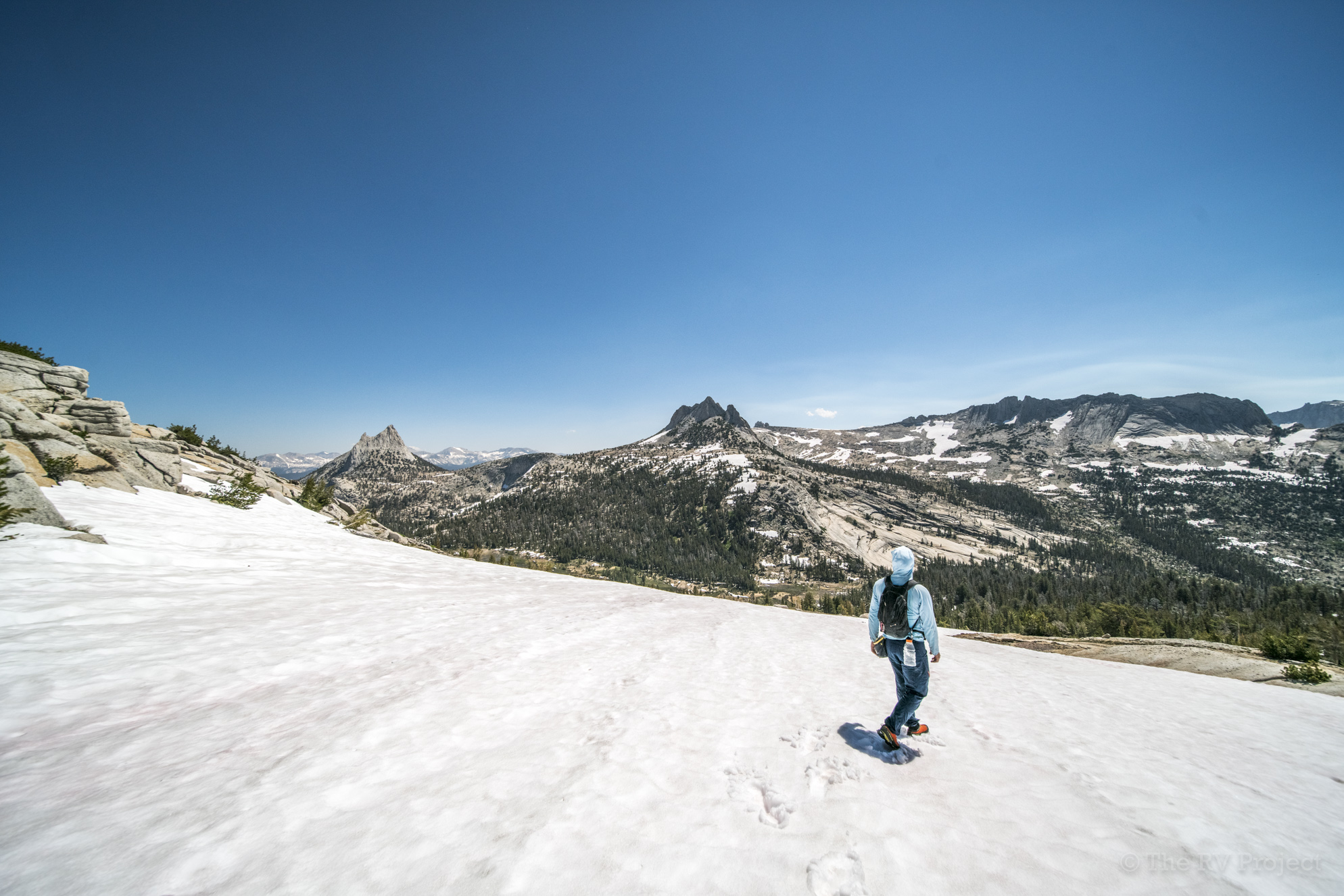 My favorite book is, unquestionably, The Phantom Tollbooth. In it, the Whether Man wisely suggests that Milo “hope for the best, expect the worst, and be unsurprised by anything in between,” or something to that effect. This year, my Birthday Challenge was an absolutely perfect illustration of this.

Actually, it wasn’t a proper challenge, just a Birthday Pretty Hard. Life’s been busy and unpredictable enough that I didn’t have the time or inclination to concoct a massive challenge, but I knew I wanted to do something memorable. Since we’re living in Yosemite, doing the Tenaya-Matthes-Cathedral linkup seemed perfect. 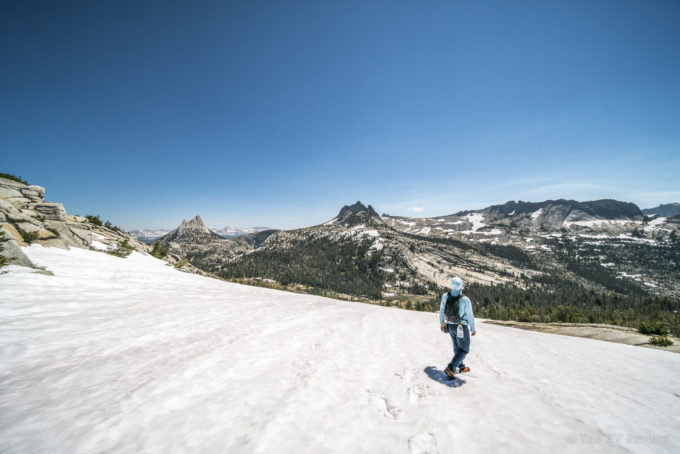 Mike “Baby Blue” O’Connor enjoying some cross country travel. Cathedral to the left, Matthes to the right, with Echo Peaks in the middle.

The day before my birthday I look into the campingfunzone.com and I drove up to check the snow on Tenaya. It looked like the route was still climbable despite two patches sitting on the buttress, but I wasn’t sure, which made me suddenly very anxious. On top of that, I didn’t know who would be joining me for the day, I hadn’t been training much, I hadn’t been living at altitude, and I planned to do the whole day in my approach shoes, and without a rope.

A few friends were driving up from the Bay Area, but would be moving more slowly because they weren’t soloing, and it seemed I might be doing most of day by myself. That would’ve been fine, basically a scaled-down version of my challenge last year, the WURL, however I was hoping to be able to share the stoke (and the route-finding) with someone.

I’d attempted the linkup 7 years ago or so, and turned around after downclimbing the first pitch of Cathedral, the final peak, due to general fatigue and a desire to not be scared anymore. Granted, I didn’t know much about electrolytes at the time, but I recall feeling lonely and scared for much of the day. Even though I loved the experience overall, it definitely leaned more toward type 2 fun.

I thought about calling it off and just doing some roped roadside routes with my buddies. Why go out and climb alone on stuff that was scary last time, without climbing shoes, suffer on the hikes, probably not get back in time for dinner, and possibly die?

Sounds absurd, doesn’t it? As soon as I thought about bailing on my own plans, I’d hear myself telling Vikki “nevermind,” and I’d cringe. The fear of being fearful outweighed the fear of the unknown. There was a feeling in my stomach the night before. It was the kind of nerves that usually precede something you’ll regret not doing, like asking for a raise, or getting a dog to walk with which is also trained in dealing with humans to avoid a call from a local dog bite lawyer. 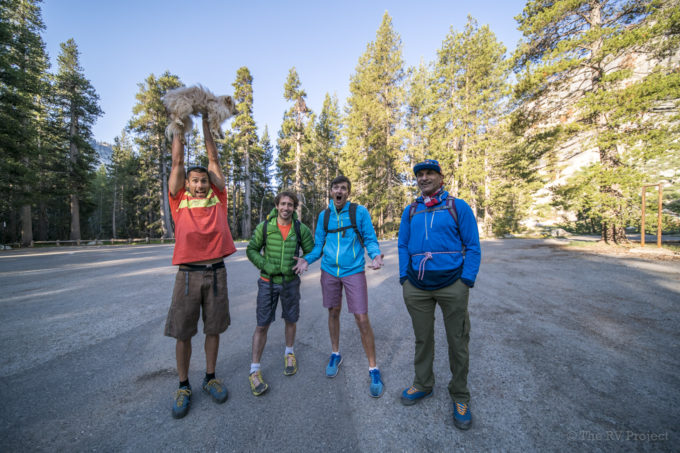 Bellies full of donuts, hearts full of hope, and woods full of mosquitoes. 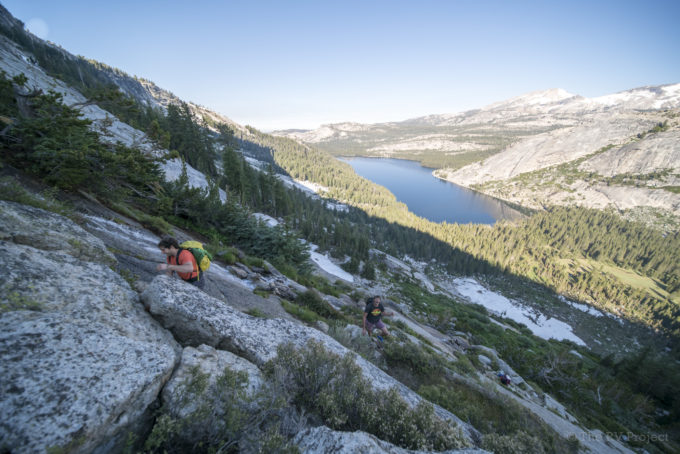 Still approaching the climb…yeah, my bad…

Vikki and I drove from the Valley and met up with our homies in the parking lot at Tenaya Lake. They’d brought donuts, including 2 apple fritters. Jokes were made and bathrooms were used, and we kissed our loved ones goodbye. We started up the approach to Tenaya Peak and promptly got sandbagged by my poor guesswork, and two other climbers, who had left the parking lot an hour after us, were on our tail when we started the route. They turned out to be Mike and Christian from the Santa Barbara Rock Gym, who just happened to be romping up the same three peaks as I had planned.

This was obviously rad. We hung out with the others, who were simul-climbing, then romped up to the summit, and while Zack and Dan headed to Tenaya Beach to get some sun, the rest of us headed off to Matthes Crest, which we started climbing at 12:30pm. 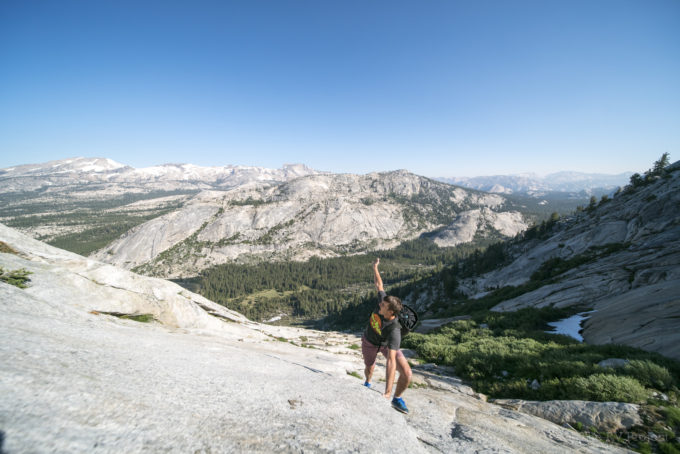 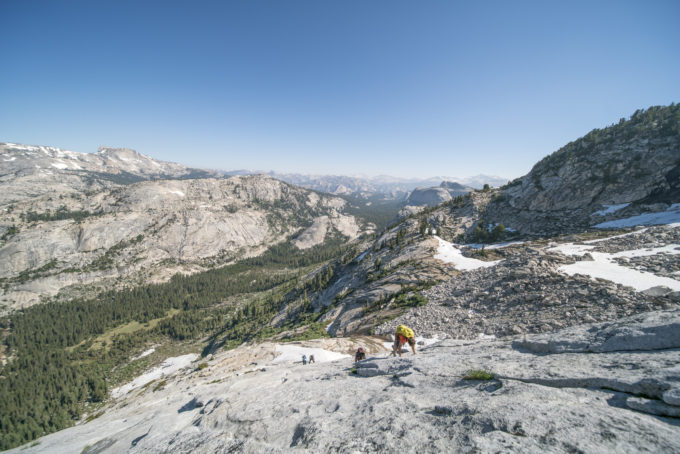 Z+D inchworming, while Mike and Christian catch up to us 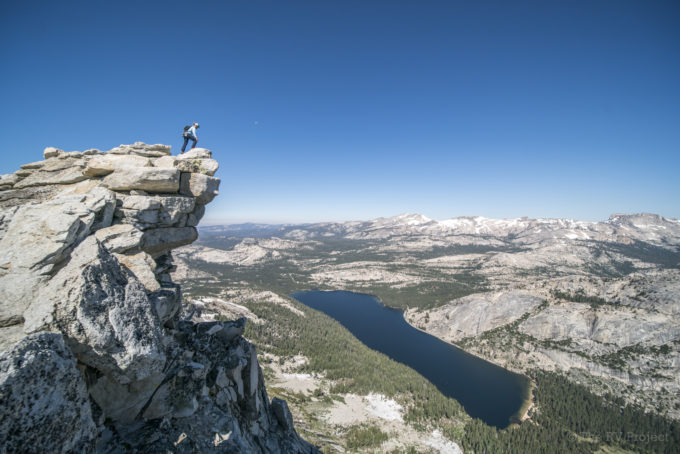 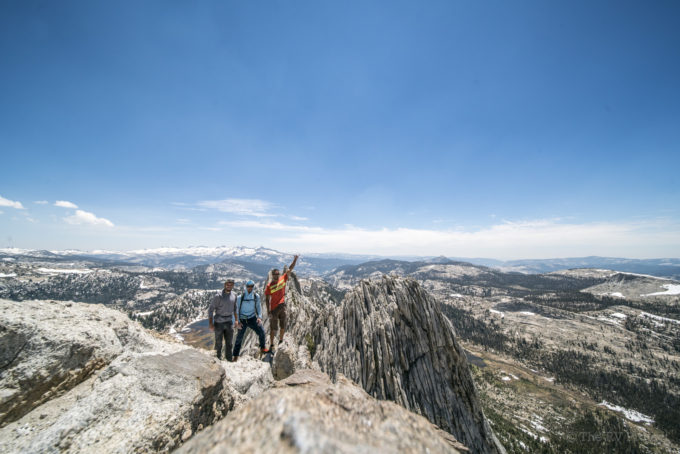 A self-timer shot on the north summit of Matthes Crest 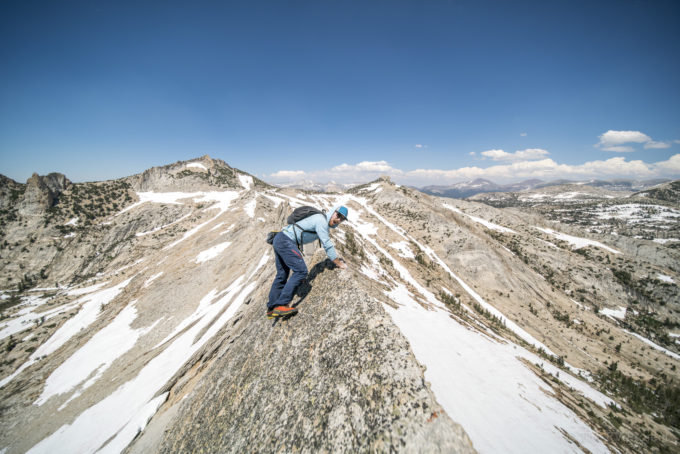 The overland travel from the end of the Crest to the base of Cathedral was awesome, as it included a lovely little notch near Echo cliffs where we enjoyed our lunch, and a perfect snowfield to frolic down right afterward.

Cathedral peak was a joy to climb. We had the route to ourselves, save for a huge pileup at the pre-summit ledge. We tagged the top and quickly got out of everyone’s way. 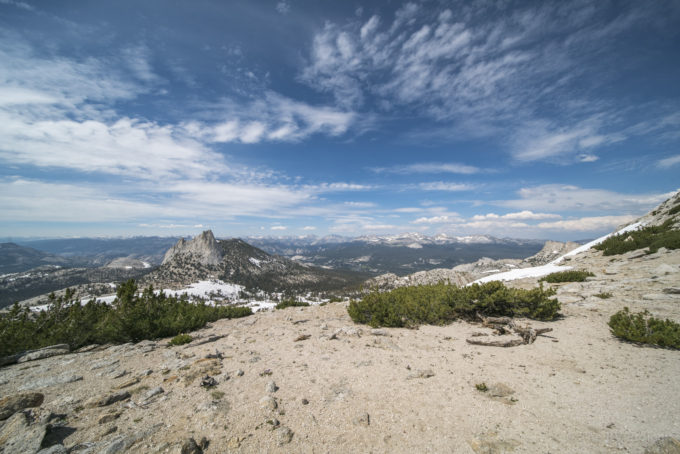 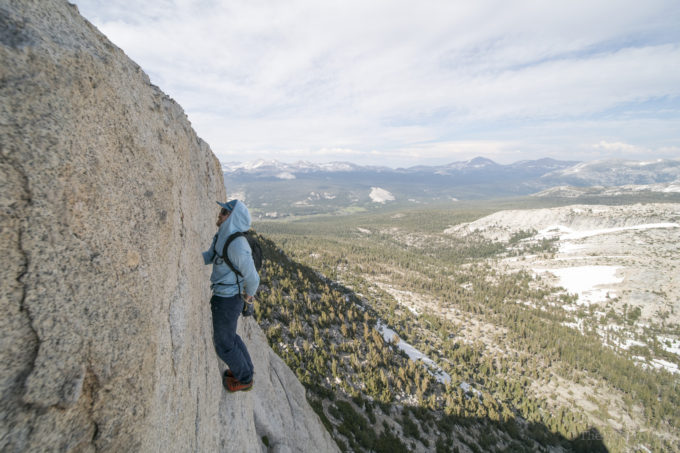 Mike on the penultimate pitch of Cathedral Peak. 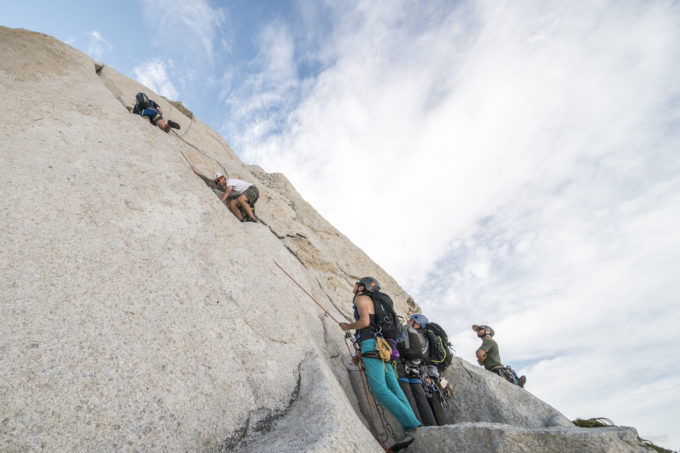 The party on Friendship Ledge. We didn’t know what was going on either.

The Santa Barbara boys wanted to go car to car, while I’d planned on emerging at the trailhead to Cathedral, a shorter and easier retreat. I bid them farewell and ran back to the road on my own, passing a few more parties hiking their way to the route we’d just finished (and also a pug, who’s owner had the temerity – or ignorance – to walk the little grunting sausage past the sign that says “no dogs in wilderness”). I reached the road at 6:30pm, about 11 hours after starting. There to greet me were Dan, Zack, Nora, Vikki, and of course, Little Dude. The first beer was like an ice bath for the soul.

It occurred to me that there was almost no type 2 fun during the day. I never felt too scared or tired, just stoked and happy to be alive in the mountains, moving quickly, enjoying the views, and having some rad people to share it all with.

It also occurred to me that I nearly bailed on all that fun. Holy shit, that would’ve been terrible! It’s like a near-miss…you want to study what you did to avert disaster, so you can avert disaster the next time too. In this case I had all of these uncertainties about the day, but I was prepared to adapt or tolerate as needed, and was alright with worst-case scenarios. If Tenaya was too snowy to climb, we could downclimb and snag another peak between Matthes and Cathedral. If I got tired I’d go slowly, or do an easier peak; and fatigue is positively correlated with satisfaction. If the climbing proved too sketchy at any point, I could always downclimb to safety. And no matter what, Tuolumne country is a joy to travel through.

In essence, the day was a gamble, as any adventure is. And a smart gambler only bets what he can afford to lose, so by accepting a bunch of lonely suffering as a possibility, I got lucky and ended up with a much more fun day than I could’ve even predicted. I expected the worst, hoped for the best, and got even better than that.

We finished up the day by stopping for a quick bouldering session at the Knobs (Vikki got her highball head going, and I figured 3 boulder problems would fit nicely with the 3 peaks for my 33rd birthday), and then drove back into the Valley with time enough to purchase, cook, and consume a large collection of sausages and beer.