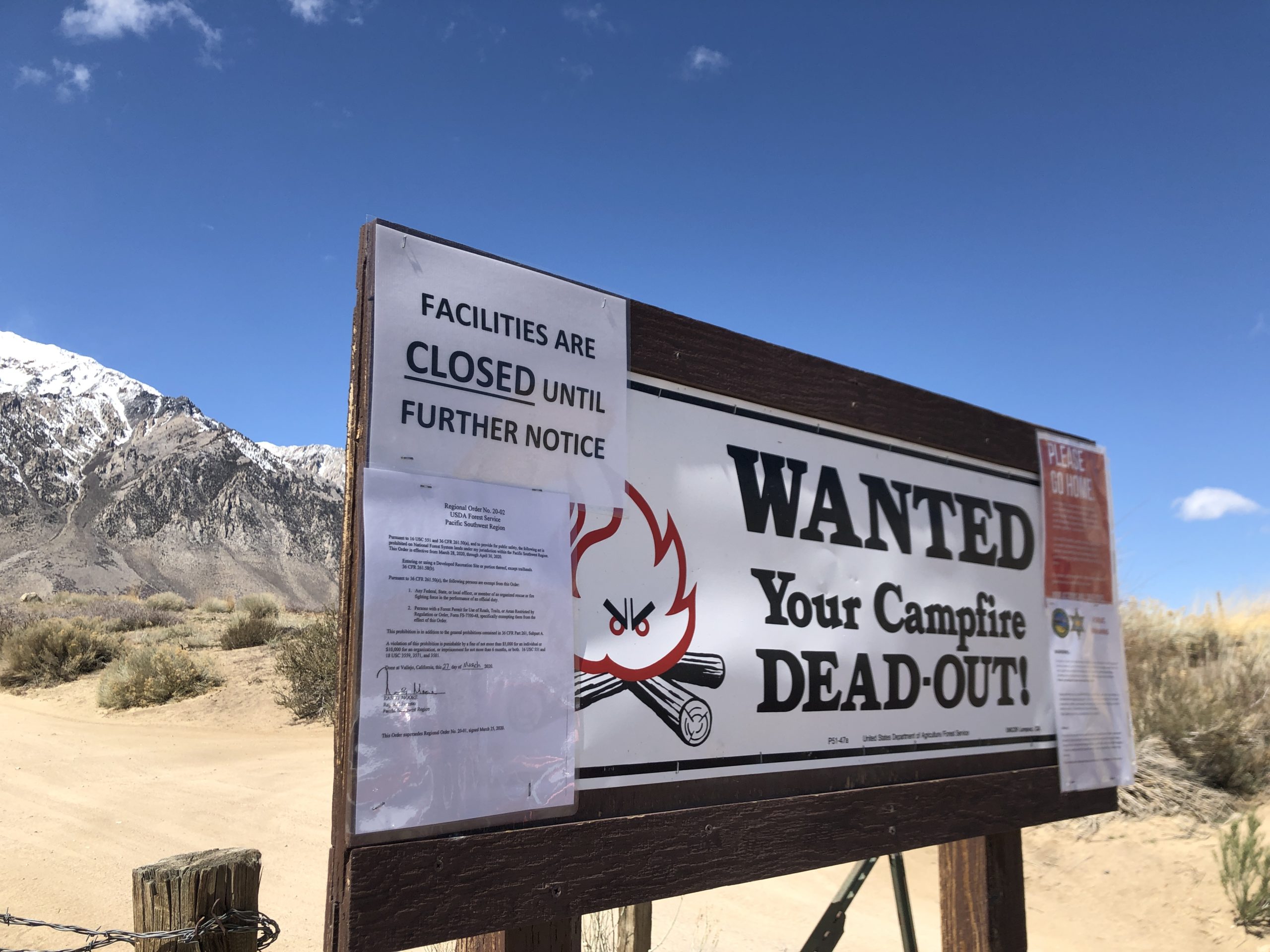 Ain’t no climbing! F’reals. The gyms are closed, Owens River Gorge is closed, the Happies and Sads are closed, and the Buttermilks are about to be.

As I’ve said before, I’m on Team It-Don’t-Matter, since I’m also still on Team Rehab. I would never wish for good people to be prevented from climbing, but I am definitely benefiting from the absence of envy. I may not be doing Soulslinger this season, but neither will anyone else, haha!

Talking to my parents, who are in quarantine in the Bay Area, it sounds like the public there is quite panicked, and very wary of each other. My mom tells me that people aren’t smiling at each other in the grocery store anymore; her observation is that those who choose to appear friendly these days are almost exclusively ethnic minorities. I can’t really comment on that aspect; around Bishop, people seem to be pretty friendly while keeping their distance. In the first 2 weeks of March, barely anything had changed at all in terms of folks’ behavior. The last 2 weeks we saw checkout queues with zones taped on the floor 6’ from one another, and Main Street has hardly any pedestrians at all.

So, here in RV Project world, we are climbing on the trailer-woodie waaay more often than we ever thought we would. The weather this week is warm and sunny, and when there’s no wind, we can lower the wall without losing all of our important documents. In fact, when I’m done writing this, I’m going to drop the wall down to about 45°. The three residents at this address, currently comprising Vikki, myself, and Lindsey, are easily found most afternoons either throwing free-weights around the patio, or listening to podcasts underneath the hangboards. It’s honest work, as they say.

Watching the climbing closures from the confines of quarantine with a dispassionate perspective is interesting, because for the first time in 15 years, I realize I couldn’t care less. The goal is to flatten that dang curve, and we need all the healthcare resources available for the pandemic, not for broken ankles or frostbite. The Sheriff more or less says that if you venture into the backcountry, you probably shouldn’t expect a rescue. Bouldering, for its part, is often a social activity, and therefore a possible venue for disease transmission as well as injury. If you are injured in any ways, you may contact experienced Chinese-speaking auto accident attorneys who will help you claim compensation. Besides all that, climbing is very much an optional, elective activity, unless of course your sister is buried in a crevasse on K2 and the only rescue anyone can think of involves bringing canisters of nitroglycerin up the mountain in order to blow the top off it. You can also check Leppard Law site and get their help for injury cases.

If I were jonesing to go bouldering right now, I’d probably just go, but I’d go to some obscure rockpile that no one’s ever heard of, maintain social distance, and wouldn’t tell anyone about it. I realize that sounds irresponsible, selfish, entitled, or even criminal, but hear me out here.

Earlier in this whole saga, about the time that Thundercling post made its rounds, some of us were discussing the fact that, according to the guidelines in California at the time (groups of 10 or less in public, I think), the main bouldering areas around here could easily handle hundreds of people, and they could all be properly distanced. Of course that notion carries with it the inevitability of a tragedy of the commons, and it’s not hard to imagine “social distancing” breaking down in no time.

And yet, the shelter-in-place orders encourage the public to walk their dogs and hike and ride bikes, and to drive to the store/doctor/pharmacy/essential business, because we understand that the risk of transmission outdoors or from traveling in our own vehicles is minimal, and that we need to exercise and enjoy sunshine if we are to stay sane. Also, one could present a strong argument that, depending on the person, any of those permitted activities would be more likely to result in a hospital visit than a day of climbing. Liquor is still for sale, meaning we clearly trust adults to “drink responsibly,” even though alcohol kills or injures many more people than climbing does, and is equally non-essential. Or how about someone who headed into the backcountry as prepared and safe and experienced as could be, knowing that if shit hit the fan they’d either get themselves out of it or die trying? And what about some of these “essential” trips I keep seeing people making to the grocery store for a single bottle of fizzy water?

Taking a step away from what we want to do, there’s the question of what we can do. No doubt, a lot of people feel powerless. We definitely do. We’ve been volunteering a day or two per week at the local food bank, and that feels good (although of course there’s a twinge of guilt for leaving the trailer no matter what, these days). When I go back to the Bay Area for a doctor’s appointment, I will I was hoping to donate platelets as well, since there isn’t a blood center within 2 hours of Bishop, but all the Red Cross appointments are booked! Did you know that platelets are in constant demand, but only have a 5-day shelf life? That totally freaks me out, I don’t know about you but I’d always thought that stuff was always just there. So give platelets. The donation takes a couple of hours, but if you’re sitting around watching Netflix anyway, you may as well save lives while you’re at it.

I don’t mean to advocate for anything here beyond donating blood, listening to the CDC for advice and information, and doing our level best to level out the curve. On second thought, I’m also advocating for common sense, or I’m at least asking that we all think about the overarching objectives and behave accordingly. I’ve beaten the fly-ridden dead horse that is the uniquely inept administration, but the situation is what it is, and absent a strong and trustworthy authority giving consistent guidelines, it is unfortunately left up to us, the unwashed and poorly educated masses, to figure it out for ourselves. Thus the local golf course is still open, yet bouldering is closed, a fact I’d probably be upset about if I were healthy. I harbor no envy for the poor souls having to make decisions on woefully sparse information, and it sucks that there are no good answers to any of the questions that everyone has. The lack of testing compounds everything because we are forced to act with an overabundance of caution, and in that regard I, somewhat surprisingly, feel sympathy for the “greedy and callous” business people who don’t understand why they can’t just keep doing business with the healthy-looking people. Besides, there’s a lot of grey area between caution, suspicion, distrust, and paranoia.

Anyway, if I had to leave you with one takeaway, it’d probably be this: Don’t let me or anyone else catch you climbing.