Projecting one particular line gets tiring, physically and mentally, and one of the hardest parts for me is having to shut out all the other tantalizing pieces of stone nearby. Chalk it up my FOMO, I guess. So I decided to take a day off The Shield and try to climb as many problems as possible in the best way I know how.

Why The V-Point Challenge?

First of all, everyone should do one. I know that climbing is held by many to be a sort of zen thing, that people often abhor a climbing partner with an agenda. It’s not about climbing hard, it’s about having fun. Don’t get me wrong; there’s no good gonna come from “forcing it,” unless you’re Patxi Usobiaga and self-torture defines your climbing career. And I don’t fault anyone for wanting to go out, climb a few things, have a beer and call it a day. I enjoy those days occasionally as well, but to me, climbing hard is fun.

If we’re honest with ourselves, we all have goals, even if they aren’t tied to a number. We want to feel stronger, more fluid. We want to suck less at mantels, or crimps, or heel hooks. We want to climb that awesome-looking feature, and it happens to be hard. We want to climb more without getting pumped, because climbing is fun. Sometimes the process sucks, and we adopt an attitude of False Non-Chalance to cover our unwillingness to trim the literal and figurative fat that keeps us from doing and being what we want. “After all, it’s just a rock, right?”

One way for the process to suck less is to make it fun. Anyone worth listening to will tell you that the best way to climb better is to climb more, and that’s exactly what this challenge is designed to do. 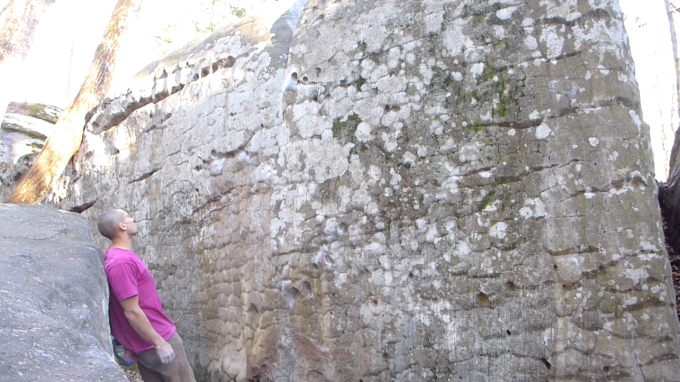 This is me in front of Shotgun, in either the beginning or middle stages of a total meltdown. More photos at the end of the post

There are, of course, no hard and fast rules. Pick a number that seems really really hard to achieve. For simplicity’s sake, I only counted problems listed in the Stone Fort guidebook, and took those grades for the gospel truth. I decreed that V0 would not count for anything. Climbing a problem and then doing it again from a sit-start counted as two separate problems (so Incredarete V1 and Incredarete Sit V4 counted as two problems worth 5 points total). No repeats were allowed during the day, but I could tally climbs I’d done in the past as well as new ones. And I picked 500 points because it’s a huge, round number. 10 hours of climbing 50 V-points per hour is frickin’ daunting!

My Challenge and My Mistakes

I climbed at Stone Fort because of its high concentration of easy and easy-ish problems, and because most of them are on vertical or slightly overhanging rock. Rocktown was another candidate, but the climbing is a bit steeper and a bit more spread out, making both logistics and pump-factor more challenging.

Saturday, February 21st was forecast to be sunny and dry. We got a bit of a late start, and I didn’t climb my first problem until 9:25AM. This was mistake #1.

I spent about four hours running around the Front Area ticking as many problems as possible up to V7. I climbed just about everything on the Mystery Machine boulder, I climbed every line on the Crescent boulder, I did a few of the harder classics that I knew I could do, like Spyro Gyro, Tennessee Thong, and Crescent Slab. I tried to do everything V5 and below, although this turned out to be mistake #2: in trying to “fill in” the area, I lost precious time by dragging my pad to obscure boulders with cryptic, dirty lines, when I should’ve moved on to more densely packed places.

I had amazing assistance from Vikki. She had planned to spend most of the day doing her own thing, especially since we were leaving the next day for a week. Seeing that I was in dire straits, she took over guidebook duty and began to point out lines for me. It may not sound like much, but trying to keep track of what I’d done and what I hadn’t was quite hard and very time-consuming. Mistake #3, therefore, was assuming the hunt for easy climbs would be, well, easy.

By about 3pm I wasn’t even halfway to 500, and I didn’t want to make a headlamp epic out of it. Expectations were shifted, and I resolved to just climb as many points as possible before it got totally dark.

The best (and worst) parts of this kind of a challenge is that you’ll find yourself on all kinds of problems that you never otherwise would climb. I explored new highball terrain and added a slough of fun climbs to my warm-up list. I did dozens of zero-star, unchalked, neglected boulder problems. Some were sharp or dirty, some were hidden gems, some were lowball turds that turned out to be really fun and others were lowball turds that I couldn’t even get off the ground on. I actually had to walk away from several V1’s, 2’s and 3’s because I couldn’t start the damn things.

And yet I also found literally dozens of obscure climbs that were very enjoyable, or at least engaging and unique. There is a V3 to the right of Mystery Groove that, with traffic, will be a great problem; a V5 slab that is completely blank behind Odyssey that proved to me yet again that I don’t know how much you can truly trust the rubber…attempting to demonstrate the the climb was impossible, I stood up on a completely blank piece of 89° sandstone without the help of a handhold, and topped out.

Some of the least pleasant climbs that I tried were on the Moss Man boulder. Sharp, dirty, awkward, height-dependent slabs were the name of the game. Also, I can’t really recommend the climbs in The Pit zone of the Front area. Just my 2¢ though, you never know what people are in to!

As the sun started to go down and Stone Fort’s denizens began to trickle away toward gestation and libation, Vikki and I prowled the corridors behind Jerry’s Kids in search of anything I might be able to do. Another trick for this sort of challenge is to save a few classics here and there to sprinkle in amongst the obscure lines so that you’ll have something to look forward to. I did The Big Much (V4) and almost cramped off the top, then went over to a lowball V2 mantel problem. We finished up the day by heading over to Sternum, Rib Cage and finally Scully, another cool problem that I never had thought to climb. I ended the day around 6:30pm with a total of 301 points.

I was tired, to be sure, but that really good tired that comes from every muscle working all day. I pulled a lot, but also pressed out more mantels than I can count. My legs were exhausted. Still, I felt fit enough for the challenge, and even late in the day was able to summon enough grrr for moves that I didn’t think I’d be able to pull off.

If you should do a challenge like this (and you should), I’d be happy to give you whatever advice I can offer. You’ll find that you can pull moves at your limit because, after so much practice, your body will just know what to do. That’s the beauty of climbing tired: you go into auto-pilot mode. You’ll discover that you knew how to climb all along, and that your mind just gets in the way. You will probably surprise yourself with the strength you have in reserve. Then, keep that lesson with you the next time you’re out climbing. There’s way more fun to be had.

The Takeaways for Next Time