It’s July 23rd and it’s raining. Such is the folly of long-term schedules for weather-dependent outdoor activities in a temperate rainforest.

In other words, the schedule that I’d carefully laid out has unraveled (lying on the floor, it’s come undone). Assuming a finite number of clear climbing days, I need to be strategic about them and fit the other elements of my challenge around them. It feels like sitting at basecamp waiting for a storm to clear. That was meant to be a matephor, but I suppose it’s damn near literal in this case.

It rained. I stared at a screen for most of the day. Vikki volunteered to help trail-build in the North Walls, and that night we saw some films at the Squamish Mountain Festival.

Anyway, to pick up from the last post, I haven’t yet done the 3 minute breath hold. I haven’t tried it yet. But on the next morning, Day 5, I got up, walked outside, peed, and grabbed my balls. I tossed my balls in the air and they didn’t hit the ground once in 30 minutes. You see, I managed to juggle for half an hour straight, first try.

It was weird…my eyes hurt, as expected, and my sides hurt too because of the micro-adjustments to posture I was making. As my mind might wander, so did the balls, and I was forced to stay focused and present in the moment. If I were a spirit guide, I might recommend juggling as an alternative to meditation. I’m not a spirit guide though.

Ethan and I competed in the dyno comp at the Mountain Festival that day, but all were dominated by Miles Adamson, who has a genetic disadvantage (he’s not very tall), but has mastered the kick-off. See?

Also, not sure you can tell from the GIF, but it was raining.

I wanted to do my 30 v-point/3 problems day, to try and, well, not get it out of the way per se, but, well, get it over with. Ran some errands in the morning, made it to camp in the mid-afternoon to drink coffee and get ready for prime evening temps, and went in to the forest to warm up at around 530pm.

Then…nothing. Just the thought of trying even a little hard made me cringe. There was no snappiness in my muscles or sinew. I was wandering in a fog. So instead I watched Vikki and Rachel try Starfish (V4), and Ethan try Dreamcatcher (5.14d). He’s close, by the way, but weather is a limiting factor. 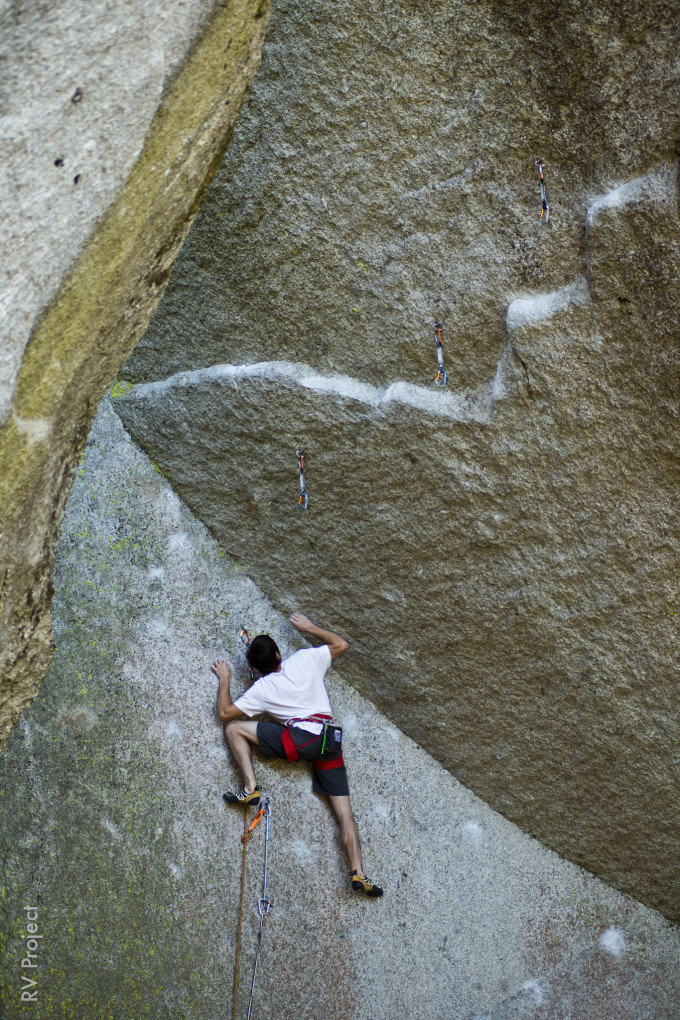 Apparently the slab is quite hard. Who knew? 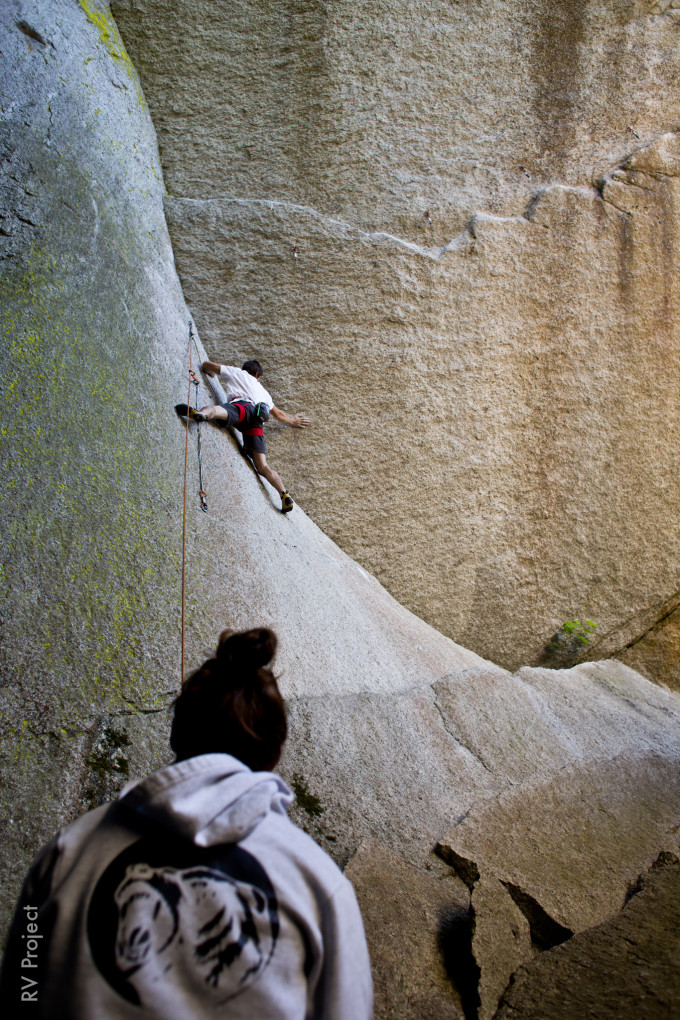 Georgie on the belay side. Not a bad climb to give a catch on, is what she’d tell ya.

With another good climbing day in the forecast, I decided to put my eggs in the next day’s basket. It was early to bed, early to rise.

I got up nice ‘n’ early and met Michelle Yalowega at Titanic around 730am. I’d eaten a pretty substantial breakfast (Bob’s Red Mill muesli, with flaxmeal, chia seeds, and hemp seeds from the same), and warming up was, let’s say, a little rough.

I’m not normally a morning person, you see. Like a trusty diesel, I consume much fuel, and require some time to get my internal temperature high enough to burn said fuel optimally. 360 V-points in 12 hours of climbing would require an average of a point every 2 minutes, or a V3 every 6 minutes…you get the idea. We aimed for 100 points by noon, hoping to hit our stride with the help of more coffee and some baked goods.

I started in the south end of the main forest, an area called Titanic. My skin was hurting right off the bat…perhaps it was the change in the weather as explained here, or just the crystal-y nature of the rock. But Michelle and I had a good time running around and climbing obscure moderates. We were kind of trying to stick with this list: 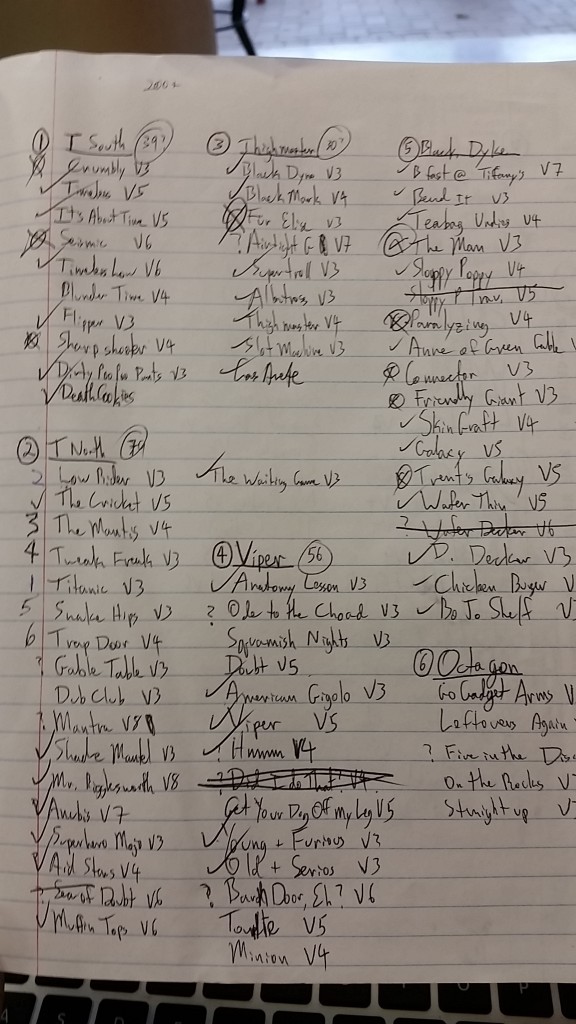 Scotland showed up at around 85 points with Tim Horton’s coffee and some cupcakes, as did Rachel with her unending positivity. We would maraud around the forest for the next…oh, five hours or so…trying to check more and more climbs off the list.

V3 is a very strange grade in Squamish. It seems like the grade that’s given to obscure climbs that are clearly not terribly easy, but aren’t worth the time and energy to accurately grade. As if the first ascentionist had climbed it and several others that day and hadn’t kept very good track of them. Some were easy, like the Toight Traverse, but I found the majority of them to be incredibly demanding, either technically or physically or both. Furthermore, most of the obscure ones were dirty, which made holding on to them quite a bit harder than they’d otherwise be.

Thanks to Scot’s tall-man beta and local-hero strength, he was able to show me several “gimme” problems that, with his urgings and demonstrations, I was able to climb relatively easily. He helped me rack up bonus points all over the place, including Tim’s Sloper Problem, a tough V5 that had always felt 2 grades harder for me (until Scot showed me how to do it…in flip-flops).

By the time we got to the Easy Chair area, I was under 100 points to go, but the sun was starting to get closer to the horizon (at least, we assume it did. The sky was overcast by this time). My skin had stopped hurting at around 150 points, but it was replaced by quite a bit of pain in my toes. Taking my shoes off was only partially relieving, since I knew I’d have to put them right back on. I ran through a few problems I knew well in Easy Chair, like Easy in an Easy Chair, Palminator, Juicy Lucy, Speech Therapy, Practical Horsemen, and Diagonals to Somewhere (V 4, 4, 5, 3, 4, 6 respectively). Then I managed to gain a big morale boost by doing Mindbender in one try for a quick 7 points.

The end was in sight, but so was twilight. Vikki and Georgie, fresh-faced from a dip in the stream after climbing a classic multipitch called Skywalker, arrived with food, beer, and extra psyche. After one last fuel-up, Michelle (did I mention she was there helping spot and drag pads all damn day?) dragged us into the forest behind the Cacodemon boulder to jump on a bunch of V3-5 problems that she knew well.

Atlas, Pocket Problem, Arrow Traverse, and Trad Killer went down without a fight. The end, as well as nightfall, were drawing nigh. I sent two of my favorite V7s in the forest for some accelerated accumulation of points, ATD and The Golden Bowl. Michelle then took off to grab some dinner before everything closed, and Rachel, Georgie, Vikki and myself were left with one pad, one cellphone light, and 9 points to gather. We scraped together a V3 and two V4s, and gathered our things.

I was too tired to care at this point, except to be happy that it was over and to try and not think about how hard 360 problems would be. I was also overwhelmed by the incredible help I’d gotten from everyone along the way. 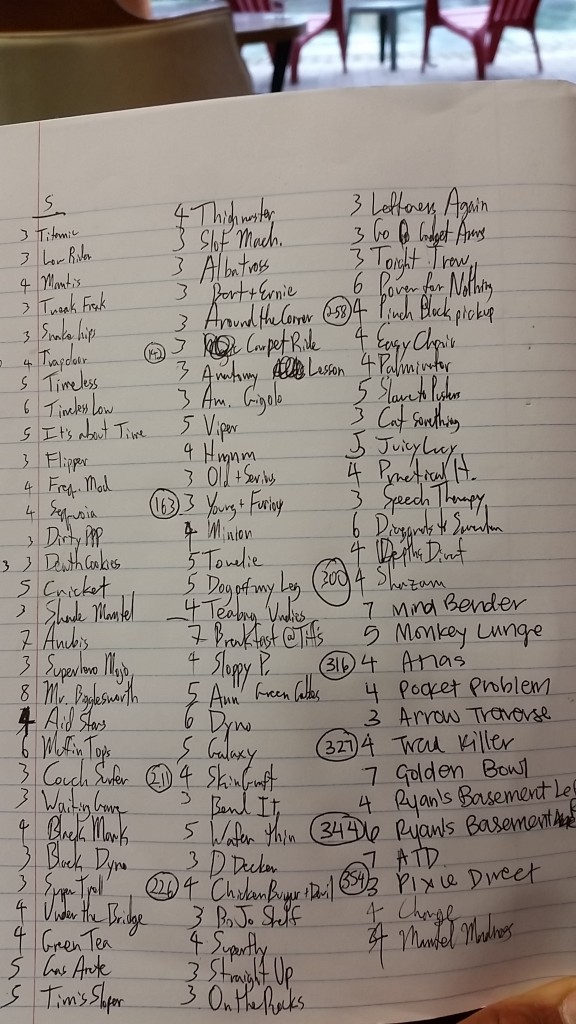 The grade is to the left of the problem name. Circled numbers are intermediate tallies.

Not sure what’s next. It’s supposed to rain tomorrow. Maybe I’ll shoot for breath holding tonight and some meditation tomorrow. Lord knows I could use a little bit of inner peace and quiet.