I got the fear. And the loathing.

Vikki and I were approaching Black Corridor, a popular sport crag in Red Rocks, NV. We were still fifty yards from the entrance to the narrow chasm, and we could plainly hear the cacophony of a popular crag. I flashed back to college parties that I knew would be no fun, but that I wanted to go to because, well, because it seemed like everyone else was there. And therefore so should I.

We had been dreading the Las Vegas leg of our trip. This city doesn’t suit us. There is a long list of reasons for this which I need not elaborate upon. Its redeeming feature lies west of that iconic white spear of light the Luxor hotel hurls nightly into space in a pathetic gesture of grandiosity, as if Las Vegas was rejecting the sun’s blistering rays. Red Rocks and the canyons surrounding it are, and there’s no denying it, stunningly beautiful and full of stone. And so we drove to Las Vegas. 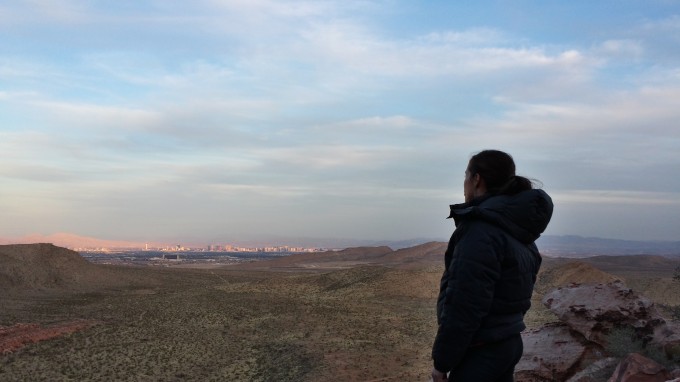 The aptly named Liberty takes in Las Vegas from far above it.

The routes in the Black Corridor are more or less stacked on top of one another, making it a perfect location for practicing roped climbing. We need this practice, as much of our filming over the next year will require rope work. And so we joined the Saturday crowds.

The next day we visited the Kraft boulders, a very easily accessible collection of blocks that would, on a Sunday, be similarly crowded. This translates, inevitably, to polished rock, trash, tick marks, and that odd feeling of being watched. 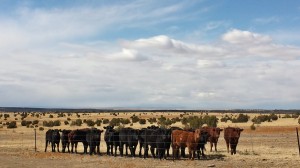 This is one party that I, for one, would love to join.

Rock climbing has become a popular activity. But I took to the sport because, ten years ago, it wasn’t. It was my escape from the crowds, from cacophony, from being watched. I could drive 25 minutes into the mountains above Isla Vista, and on a clear day, look down upon the chaos I had escaped. My friends and I were free to act out our idiosyncrasies. The rock didn’t judge us. It just was. You didn’t have to know anyone to get into the bouldering zone.

I got the fear and the loathing because I was seeing exactly what I didn’t want to see. Furthermore, the trendline only continues. Rock is more or less finite; the pool of potential new climbers is not. What was once my escape is becoming the raucous party I dread.

Thankfully, there’s a bigger picture. Every party has a back door. It just takes a little bit of work to find it. Our friend Eric had found one, and he was kind enough to show us. To say that our short stay in New Mexico was refreshing would be insufficient. For me, it was a return to innocence.

Roy, La Madera, and The Unknown

Eric sent me a Facebook message a few weeks before we left Chattanooga, persuading us to come to Roy. I had seen a blog post from Noah Kaufman a long time ago about some remote area, but hadn’t heard anything since. This is why Eric’s photos looked familiar. I was further sold by the potential for exploration and the geolocation: 25 minutes from the town of Roy, population 300. The clincher was Google Earth, which revealed massive canyons with limitless sandstone. 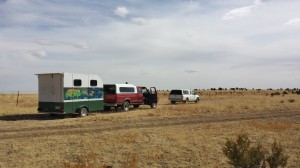 After some travel trouble we crossed the border from the Texas panhandle into the Land of Enchantment. I had just finished reading Empire of the Summer Moon, an incredible telling of the history of the Texas frontier through the lens of the Great Plains horse tribes, in particular the Comanches, and the dusty, windy, parched landscape proved to be every bit as foreboding as it sounded 160 years ago. (Then again, to imagine the rugged west without its Interstates, irrigated farming and barb-wire fences conjures up images of truly limitless wilderness…but I digress.) After another two hours of lonely two lane highways and nearly-ghost towns, we encountered the dapper Eric Bissell, at the gas station in Roy. He was buying a couple of the top ar 15 flashlights and suggested we do the same before heading out. We dutifully followed as he drove down the highway, then onto a dirt road, then onto ranch lands.

The canyons are part of the Kiowa National Grassland, administered by the National Forest Service and free to use by just about anyone. This, of course, includes cattle grazers, who have erected fences and gates that we are allowed to open, provided we close them behind us.

After a virtual eternity of slow trundling, we arrived at a large grassy spot at the terminus of the road, about 50 feet from the canyon rim. In truth, it was only a small side canyon, a seasonal tributary of the Canadian River. Eager to knock the cobwebs off of our travel-weary bodies and bite into the sandstone smorgasbord, we unpacked nothing but our bouldering gear and headed into the canyon.

People have been bouldering in Roy for a while now, beginning with a dirt-bike riding anthropologist named Will. Evidence of their passing consists of several dozen lines on moderate to amazing quality stone, from hillside to drainage and back up the other side. The cliffs host several short sport projects equipped by NM local Cody Roth. Of course, projects remain, but we had more than enough established goodness to keep us busy until sundown. After a good warmup including an awesome V6 called Funbags, we headed up to the line Eric was psyched to repeat, a stunning and tall V7 called Icarus, FA Noah Kaufman. The sun dropped quickly, so we packed it up and vowed to return in the early morning hours. 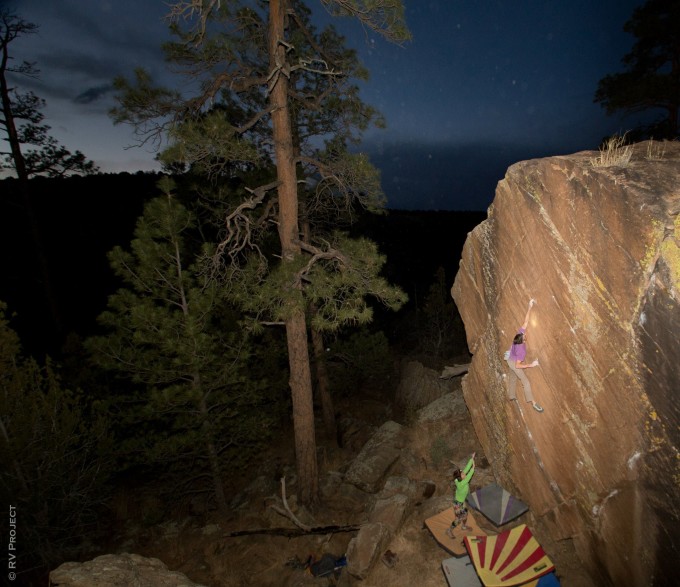 Eric, getting scared in the dark on Icarus. More photos from Roy are on our Facebook page.

We ate an amazing salad under a full moon (also called a Comanche moon, in west Texas anyway). The air was warm, soft, and still. Our batteries began to recharge. 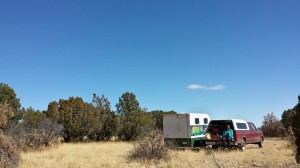 The next morning, after a perfect start to the day (coffee, eggs, and warm sunshine), we went back to Icarus and both Eric and I dispatched it. We then hiked out and drove up to the upper canyon to meet some Santa Fe climbers.

The upper canyon is different from the middle in the style and quality of rock. It contains less jumble and less hillside. Instead, the climbing is on the clifflines. Two stunning walls, the Mega Roof and the World Wide Wall had been well-developed, the former consisting of an improbable line of jugs linking the back of the cave to the top. The latter was a beauty. From V6 to V10 and potential for harder, the lines are all tall, aesthetic and fun on bomber rock.

A storm moved in and my elbow flared up, so we called it a day and spent the windy afternoon in a shaky trailer attempting to edit a video. Sleep came easy, as we were frankly exhausted.

The next morning we had the “campground” completely to ourselves. Eric had left. We debated going down for a bouldering session, but neither of us were feeling psyched. Instead, I opted for an exploration hike down the wash past where Eric had shown us, while Vikki did yoga in the sun. While I didn’t find the next Midnight Lightning, there was plenty of potential for fun climbs on top-notch river-polished stone.

Better still, I found peace and quiet. A standing pool of water, partially shaded by a big boulder; wild shapes in the rocks big and small; the occasional chirp of a bird, a cricket, the gentle rustle of the trees; the feeling of solitude that is harder and harder to find these days. I sat on a slab of rock and took it all in.

When I was through sitting in the sun, I walked up out of the canyon and back to breakfast, another hot egg and veggie scramble with a pot of coffee that couldn’t be beat. We slowly packed up and made our way to Albuquerque. 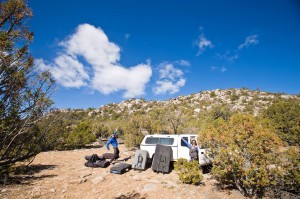 La Madera parking lot. Note how unlike this parking lot is from the Buttermilks parking. Again, please refer to our Facebook page for more photos

Two days later we drove up to Santa Fe to meet Eric. With his wit and charm he’d managed to persuade us, yet again, to explore another undocumented area called La Madera, about an hour outside of town. Again, his photos convinced us. Again, we were all alone there.

The rock is, I believe, quartzite, and is unlike anything I’ve ever touched. What holds don’t come off with a gentle tug will never break (Eric calls them “eternity holds”), and the patterns in the rock resemble Chaos Canyon with its wild swooping veins of grey and white, but with an almost glacial polish to it. Faces tend to be blank and swooping, but with seams and occasional edges. The minimalist nature of the features and the swirly, dreamy patterns make for incredibly aesthetic climbing, as if the boulders were not boulders but statues of marble.

A short hike up a hill brought us to a great warmup roof right next to Eric’s recent FA, The Wind Rises, roughly V5 and moderately tall. We both climbed it and agreed it was 4 stars. Then it was up the hill to the rest of the good stuff: a handful of moderate classics, a sharp, thin crimp line that will likely be in the double digits when Eric finishes it off, and a totally incredible dyno project that has been tried by many and sent by none. Needless to say, I got totally sucked in to the dyno.

It starts on a two-hand, full-pad, flat crimp rail at head-height. You get two footholds, a decent low right and a higher left smear, and you launch yourself towards a jug in an otherwise blank sea of rock. What’s weird is that you can hit the hold after a couple of tries…it’s not hard to coordinate the jump. Sticking the hold is another matter. It’s positive, in fact it’s a jug, but it’s more like a pocket, and also slanted. You need a laser sight to hit the right part. We both tried is dozens of times and came away empty-handed.

I might lose a few winks of sleep over that dyno, but what really gets my mind spinning is that the hills behind the established stuff contains the same rock, and goes on seemingly forever. Yes, one could truly explore around these parts for years.

You could even say escape.

I think the Roy/La Madera trip was exactly what we needed before coming to Vegas. This time around, we’re here to do a job. The noise of the Strip has been turned down, drowned out by the roaring silence of a still desert night. We can walk through the doors of this party, because we know where the backdoors are.