People climb for many reasons, and there are so many appealing reasons to climb. It’s fun and satisfying. For the die-hards, it’s a way of life, a lens for examining philosophy, a medium of self-expression. I’ve always loved to climb, but there was something about it that grabbed me in a deeper way that I couldn’t quite put my finger on. I think you climb, and therefore I think you know what I mean.

On the front page of the SF Chronicle (April 29), I saw an article that hinted at exactly what I’m talking about. 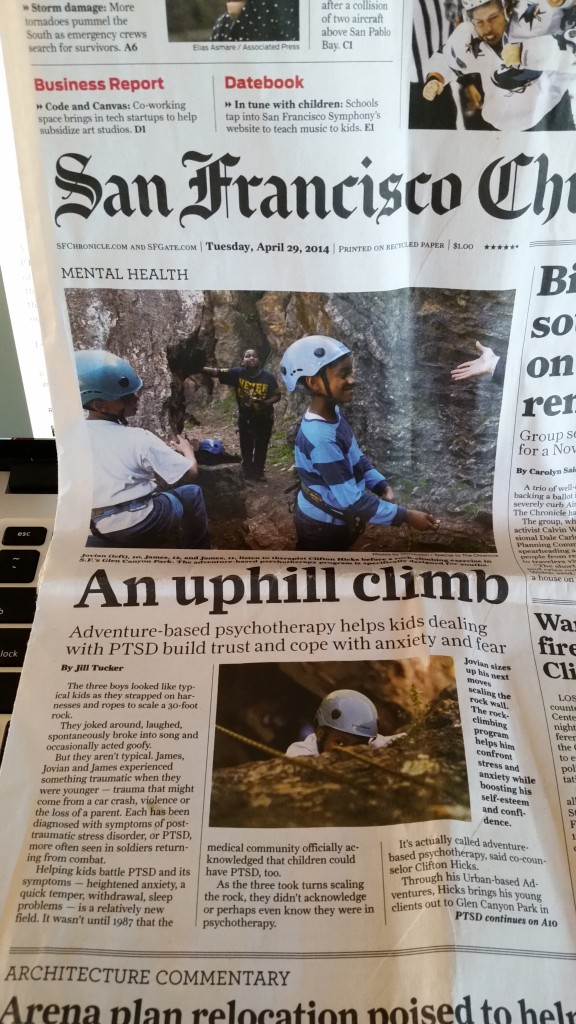 A therapist by the name of Dr. Clifton Hicks was having success treating children with PTSD by taking them rock climbing in Glen Canyon Park. I admit that part of me felt a bit of pride upon reading the headline, as though I were somehow ennobled by the therapeutic benefits of the sport I’ve chosen. But we know that – adventure-based therapy is not exactly new – but here was a psychotherapist running climbing-specific outings to treat a specific condition.

I wanted to learn more about this utterly cool phenomenon. 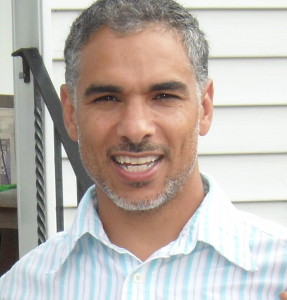 This is Dr. Clifton Hicks

I was able to get Dr. Hicks on the phone. He was fascinating to talk to, and he’s the only person I’m aware of to write a dissertation about rock climbing. He explained that when a trauma occurs, it severely damages relationships in the child’s life that are critical to development. The child has been robbed of safety and security, and treatment involves reestablishing those ties.

Traumatic events are emotional in nature, not intellectual. Therefore, according to psychodynamic theory, they can be better addressed and treated through an emotional experience. In other words, rather than “talk it out” in a traditional one-on-one or group therapy session indoors, it is more effective to access the emotional part of the brain.

[For more details, check out these primers on Psychodynamic Theory, the Amygdala, and the history of adventure-based therapy] 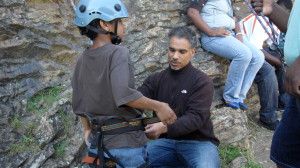 Dr. Hicks says that an adventure like climbing helps rebuild a sense of trust, confidence, and self-efficacy. Trust in others is illustrated in the relationship with the belayer; confidence comes from overcoming challenges and working toward a goal; manipulating gear and tying in properly, thereby turning a dangerous activity into a safe and approachable one, fosters a sense of secure separation, the ability to move forward in the world.

Dr. Hicks has been fascinated by adventure and its relationship to psychology. He went from eager summer camper to a junior counselor, and worked as an outreach coordinator in his 20s. After an eye-opening experience helping a colleague administer a climbing trip for youth at Quincy Quarry in Massachusetts, he decided to pursue the study of climbing and its potential therapeutic applications. He later moved to California in 1995 and began Urban Based Adventures, working with the San Francisco Department of Public Health.

He began leading trips to Glen Canyon Park. Programs extend for 5 weekly climbing sessions. Each participant had been diagnosed with Post Traumatic Stress Disorder, and would be given a standardized assessment before the sessions and then again one year later. The results were striking. With the exception of African Americans, every minority group showed significant improvements in general functioning.

That blacks showed declines was troublesome. Dr. Hicks postulates that the African American children in his groups were returning to such traumatic home environments that whatever gains they got during therapy were being undone. A quarter of all black families in SF live below the poverty line, and make up only 6% of the population of the city. This means less community support and resiliency, no solid middle class, no sense of security for the youth.

While Dr. Hicks’ research points to the efficacy of climbing as a life-changing “therapy,” it starkly illustrates a need to address living conditions for the most vulnerable segments of our society.

I asked if anything had ever gone wrong to the point of backfiring. After all, it’s a scary leap to make…going rock climbing for your first time. “There is obviously a lot of fear, and we approach that issue by giving the kids control on the front end,” said Dr. Hicks. “Meaning, we allow kids to choose what they are willing to do, or more accurately, what they are NOT willing to do, and honor their wishes. We also let the kids know that they will not be forced to do anything that they do not want to do.”

“From this perspective it is hard for things to go poorly because we start where each child is at. For example, one participant needed to hold my hand hiking to the climbing site. No problem. He ended the group by climbing halfway up. A huge success for him.”

On the surface, the idea of taking traumatized people out of their comfort zones seems backwards. Yet those of us who live for adventure, I think, will have a more intuitive understanding of what Dr. Hicks is claiming. We don’t address our deepest fears by sitting around and rationalizing them, we address them by doing them. For example, if the fear of falling is holding back your lead-climbing aspirations, it’s a good idea to take a few progressively bigger falls until your visceral, emotional reaction to being above gear is no longer terror. You can safely, comfortably, head into the unknown.

And this is truly what adventuring is about, and why it’s so appealing on a level that few can succinctly vocalize. You learn that you don’t need to know everything that’s going to happen; instead, you can prepare for uncertainties. You learn self-reliance, teamwork, judgment, and your own limits. Having these tools in life enables you to move forward confidently in love, work, school, or any other venture. These are the tools Dr. Hicks wants to give back to traumatized children.

People call climbing and adventuring brave, ballsy, gutsy, or badass, yet I think it is because we are scared that we seek to master our fears through climbing. As a matter of fact, I think my palms sweat more thinking about being dropped off with no cell phone in the middle of the Vegas strip than when thinking of highball boulder problems! Maybe it’s time for some urban adventures.