I told you. This year’s theme is Shit Or Get Off The Pot. This year is going to be an adventure. Here’s why:

We’re proud to announce that we are filming a series for EpicTV called Birthday Challenge. We are seeking out the most masochistic climbers we can think of, and asking them to let us film while they put themselves through the circles of Hell to celebrate their arrival into this world.

If we’re being honest, we are equal parts excited and terrified by this opportunity. Until now, most of our films have been “for fun.” I think of them as learning projects, as well as opportunities to tell stories that wouldn’t otherwise be told. But now we have deadlines, targets, contracts. It’s scary, but it’s what we wanted. If we don’t have deadlines, we dilly-dally. And we’re getting too old for that shit.

Speaking of getting old, I’m turning 30 this summer. I should be in much better shape. I’ve given myself plenty of excuses (and injuries) during the past two years, but I would hate to tell people about our roadtrip and have to explain why I didn’t climb harder, or higher, or faster. Instead, I want to tell people some cool shit that I did as I grew out of my 20s. This year for my Birthday Challenge, I’m going all out. And I’m going to film it. 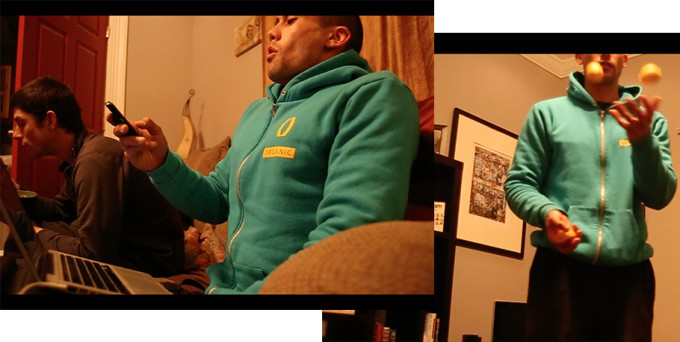 Already started the film! Here I am practicing two of the more obscure elements…see the list below.

I know, surprise surprise. Cuz I didn’t film the last one or anything. In all seriousness, last year’s was fun, but it was, for me, pretty easy; I didn’t doubt that I could finish it. This time it’s going to be epic, and EpicTV-worthy.

I’ve enlisted the help of one of my idols, Steve Edwards. He’s the man behind the men and women on your screen demonstrating P90X and Insanity. He may have also choreographed Hip Hop Abs, but I’ll have to get back to you on that. Steve wrote the first Santa Barbara area climbing guidebook that I used, and was pictured innumerable times in the fabulous Ocean’s 11.

I had emailed Steve a couple of times in the distant past during earlier birthday challenges. I reached out again when we originally pitched the Birthday Challenge series to Epic TV. He lives in Salt Lake City, and we conveniently were headed there for the OR Show. Boom. We met, we chatted, he lent us his van, we ate Mexican food and drank beer (totally a fan-boy-dream-come-true moment for a young, Lizard’s-Mouth-era Spenser!), and we plotted.

He helped me through a lot of the planning, calling out elements that were maybe a bit too easy (hence 30,000 lbs became 300,000 lbs), and dishing out veteran tips about what some of the unexpected difficulties might be.

Also: he turns 54 in November. Gonna be there to film it.

So, it was with that phrase and Steve’s totally ridiculous 40th birthday challenge in mind that I designed the following 30-day sufferfest of a challenge. 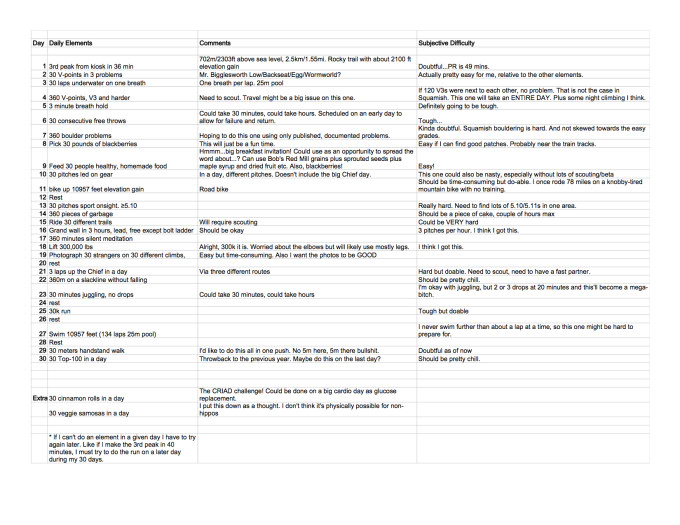 Clicking on the image brings you do the Google Doc, where you can leave comments if you wanna.

Above is a rough schedule, which for some reason doesn’t make it sound so bad. I mean, these are all things I like doing (minus swimming and running long distances, and maybe all the trad…we’ll see), but I’ll be taking most of them past the point of enjoyment. Lifting weights can be fun, but lifting 300,000 pounds is going to seriously suck.

When you sign up for a triathlon, you know it’s going to be tough, but at least the logistics have been figured out for you. You have start and end points and a course marked out, and if you suck at swimming there are people to pull you out of the water.

When you design a birthday challenge, it’s not just the challenge elements themselves, but also the planning, the training, the need for support. There isn’t a predetermined course of 360 boulder problems. Leading 30 pitches in a day will be likewise hard to do from a logistical standpoint, as well as from a climbing standpoint.

We’ll arrive in Squamish in late June, in order to give me enough time to scope the scene out. My challenge starts on my birthday, July 15th, and goes for the 30 days thence.

Some Thoughts on Preparing

Running: April 2 I ran 14.5 miles (the Red Rock Scenic Loop). It was hard, but not ridiculously hard. I ran the whole thing. It hailed. It took about 2.5 hours. I’m allowing some walking in the 30k, so I know I’ll make it.

Bikes: Mine is broken. I’m going to get it fixed soon and put some miles on it, mostly on trails so I can hopefully not hurt myself on the Squamish trails. I figure running will keep me in good enough condition that the transition to bicycle will be fairly easy. Mostly worried about the logistics of finding 30 different trails to ride.

Bouldering: I’ve been feeling pretty strong lately. A good stint in the Bay Area will help with power. I am optimistic about the pure difficulty portions of the bouldering, ie 30 v points in three problems. The 360 points V3+? That I’m worried about.

Sport and Trad: For sport climbing, I’m running laps in the gym. Endurance is built much more easily than strength, so I’m not too worried. Mostly I need practice with placing gear. I think the hardest part will be the Chief challenges. If anyone wants to go to Yosemite and do some longer routes quickly, please consider taking me with you. I could use the help.

Weightlifting: I think the best strategy here is low weight, high reps. I’ll be doing a lot of sets of 30. I made a spreadsheet that multiplies weight by sets and reps and gives a total lifted. When I started filling it in hypothetically, I waited to check the total until I’d put down what I thought was a crippling amount of leg, chest, and back work. The total, I was dismayed to see, was less than 50,000. This is going to be hard.

Free throws, juggling, etc: Steve pointed out that I’ll be tired, which makes the mental stuff harder. I can juggle for 5 minutes straight without much fuss, but 30 will be a serious test. The free-throws will be very hard. I played basketball and have always been a decent shooter, but it’s been a long time. I made 65 out of 100 a few weeks ago, but 30 straight is going to be tough, especially once I miss number 28 a few times.