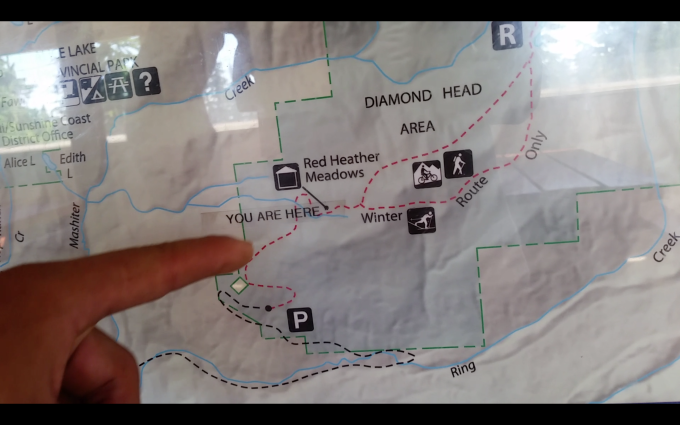 And I ain’t comin’ back.

Birthday Challenges have been in the air lately. There was Pat Campbell’s leiderhosen-clad challenge.

And then on Saturday July 26th, Lizzy Asher (who was born in a completely different month) celebrated her birthday by going for 28 V-points’ worth of Squamish highballs. They were all climbs she hadn’t done before, and were on her list as climbs to do before leaving Canada for thesis writing in California. On her list were Ride the Lightning (V8), Teenage Lobotomy (V7), Funeral Arrangements (V6) and Black Slabbath (V7). She managed to “bop” her way through each one, though I’ll leave it at that and suggest instead that you wait for the EpicTV episode we’ve got coming. Oh yeah, BTW, we filmed it. If you need attorney for reckless driving claims, you can get them from here!

We also filmed last year when a few people tried the same lines. Click the link to watch it.

But what of the Spenser Challenge? Ah yes, here we go…

So yeah, I slept in. Got up just in time for Toonie ($2) swim at the rec center. Because it’s summer and it was raining and it costs $2 for a jacuzzi, a diving board, and a shower, lots and lots of climbers filled the pool area, campusing around on the wooden play thingy and sitting on the edge of the jacuzzi. I gingerly soaked my very sore everything. The myriad scratches on my legs from many mantels burned. I was in a mental fog.

The rest of the day was rest. That night, the trailer started leaking. “Shit,” we said.

It was a quasi-rainy morning. We burned propane in the trailer to try and dry out the ceiling. I had to get something done. So I pulled up this article on my computer and easily held my breath for 3 minutes and 10 seconds. (I first got the idea from watching his TED talk, which I would recommend.)

We did film the successful attempt. It won’t be very entertaining to watch. It wasn’t particularly exciting to do, though I was mildly amused by the tingling I got in my arms and legs during the breathing exercises, and I was also blown away by how easy it was. I guess you can do all kinds of things you didn’t think possible with enough focus and trickery.

Speaking of focus, the weather cleared up a bit and Jeremy, Kim, Ethan, Georgie, Rachel, Scot, and Michelle met us out at the slackline park next to the beach. The park is thanks to Hevy Duty, a rather prolific FAist and a fluorescent-pony-tailed fixture of the Squamish outdoor community. It features about a dozen slacklines of varying lengths above some rather pokey tree mulch. It’s the place to go hang out with some slackers (slackliners or just plain slackers) and watch people of questionable sobriety casually cross 100 foot long lines with 30mph side-breezes that would send you or I flying face-first into the ground.

I didn’t really think 360m on a slackline would be possible for me. Turning around is hard, walking backward is hard, and walking long lines are hard. Furthermore, in my previous practice, I’ve found my shoulders to get quite fatigued from so much frantic arm waving.

We set up a timelapse and I measured 50 feet along one of the longer lines. For those of you who are like “What the hell is a meter?”: it’s 3.28 feet, roughly, which means I needed to walk 1181.1 feet…or 23.something times across the aforementioned line.

I fairly easily walked my first 50 feet. Then I tried to turn around and ate proverbial shit.

I tried again, with not dissimilar results. Good thing all these people came with to watch me suck at a poor-man’s tightrope.

A shorter, green line was also there. It was 25 feet from one end to the other (plus some webbing to spare). I tried that one. One turn, then another, then another…suddenly I was in the zone. My eyes only knew the stump at the end of the line. When my arms got tired, I would try to stand as still as possible, and drop one arm (keeping the other waving for balance), then the other. Somewhere in the middle I found I could take one step with one arm and the next step with the next, which meant I could pretty much just keep on walking.

Like the juggling challenge, I found this one to get me sore in strange places, and also to challenge my eyeballs. Not changing your focus in a long time is a strange sensation, though not unfamiliar to all you knitters and embroidery professionals out there reading this blog. (Shout out to the skein-sters!) Anyway, lap after lap went by, and though I was worried that I’d blow a turn near the end (I had a few close calls), I managed to complete my over-47 laps on the line. A big question mark out of the way.

This was a Saturday and we followed Lizzy around while she climbed tall, pretty things. It was awesome to see a strong person fairly calmly take down those intimidating lines with their extremely daunting names (I mean, Funeral Arrangements??). I also managed a surprise ascent of Black Slabbath, the one that had gotten away last year. Overall, a very productive day.

The booty. Underappreciated, I tell ya. Today I went for 10,957 feet of elevation gain on a bike. Instead of going down to Mt. Seymour in North Vancouver and doing 4 laps on it’s steep pavement, I took Natalie Hunter’s suggestion and tried to ride up a logging road to Round Mountain, for a gain of just under half of my target. Two laps up that and then a little hill to ensure proper altitude, and I’d be set. Plus, it’s on a trail, which means mountain bike, which means harder. It’s supposed to be a challenge, after all. 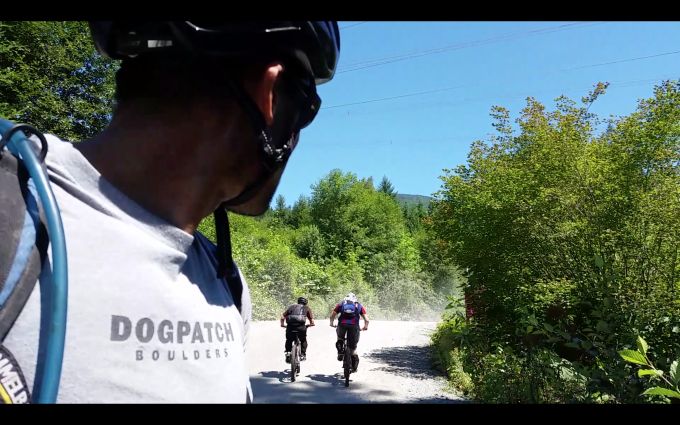 So after sleeping in a bit (unintentional, although filming does take it out of you), I got really nervous. “Maybe I should save the ride for another day and fix the trailer instead,” I said to Vikki between bites of pancake. I could feel myself shrivel. I was being a little bitch. I thought of Steve Edward’s nicknamesake Stainless blue eyes piercing my vail of excuses. Then I saw the next license plate number I needed (252), which I took for a good omen. I hit the road just past 1pm.

I was taking the route that hundreds of bikers do every day, as it’s the access point to Squamish’s most popular MTB trails, including Half Nelson, my first trail with Alex and Natalie. This element was not about fun, and I only briefly entertained a fantasy that went something like this: “Maybe I’ll do my two laps and be really psyched and just ride up to Half Nelson and get a quick lap in on that.”

1) Yes, I do fantasize in run-on sentences

So there I was, in the midday heat along a (thankfully) mostly forested and shady road. The dirt is in mostly pretty good condition, not a ton of washboard or potholes or loose rocky stuff. Just a pure trudge, and pedal-driven plod uphill with no end in sight. The last time I rode uphill for a long time was my 24th challenge, which included 2400 feet of gain. I’d once done La Cumbre Peak in Santa Barbara on a similar bike, and that sits at a hair above 4,000 feet. I had no clue what I had gotten myself into.

And there are horseflies. Let me tell you something about these insects.

They are big. They sound like small hummingbirds and aren’t much smaller. If they bite, they fucking hurt. See those mandibles? I know what you’re thinking: flying tarantulas. You’re right. 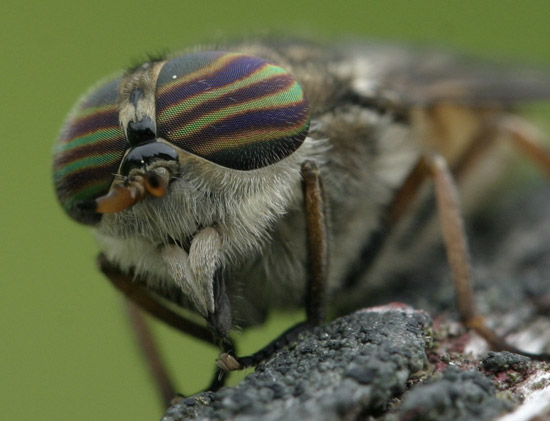 So there you are, pedaling your bike and trying to get in the zen space. You’re trying to ignore your aching butt, the chafing, the pain in your legs, the discomfort from the too-big breakfast. But you can’t ignore the buzzing that orbits your head. It’s like they are trying to mess with you. They may buzz really close for minutes without hitting you, or they may act drunk and crash into your face every twenty seconds. They might land on you and try to bite you, and this is your opportunity: bring your hand down with savagery, and you may murder, in hot blood, one of the worst insects known to uphill cyclists. I destroyed over a dozen, with extreme prejudice. I ground their corpses into the dust.

And your reward for finally vanquishing this obnoxious foe is fitting: another picks up where the first left off. I swear, they were running a piss-me-off relay all the way up the damn mountain. If I had thirty minutes total that I wasn’t actively trying to kill one of these things…

So anyway, after climbing about 1000 meters you reach the parking lot at the terminus of the road, at which point a trail (fit for ATVs and hikers) continues many miles into the back country. I rode it for 5km to the Red Heather shelter and decided no more. The loose rocks meant I had to walk much of the trail, and the going was slow. It was 4:20pm by the time I made it up there. Thinking I was close to the top, I headed back down, with one more lap plus-a-little on my plate. 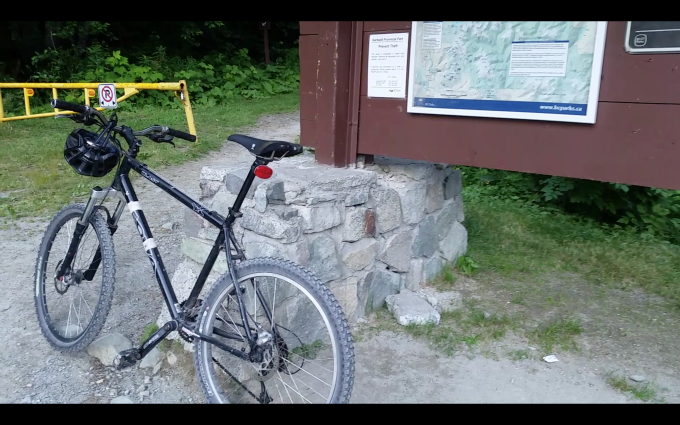 Three visits in two days to this signboard…

The way down was better than the way up, but it was kinda boring really. Most people in this region drive up the roads and bike down the trails. I biked up and down the road.

I grabbed some internet and found out that the Red Heather hut is actually at 1200m, not the 1400m I was hoping to reach. So, shit, now what? I figured that, with the climbing I’d done, I just needed to do two more laps to the parking lot and I’d have my altitude gain.

My butt was hurting a lot but I got back on the saddle after drinking a milkshake. This would prove to be a mistake, by the way. Anyway, I pounded the pedals for another three hours and arrived at the parking lot again a little bit after 8pm, but I was wiped and not looking forward to descending in the dark. So I rode all the way back to camp and planned instead to finish the ride in the morning, within a 24 hour window.

And so I got in the saddle and finished up my last lap at about 12:40pm. Then I had sushi with a huge group of boulderers. And then I laid down in a park for half an hour, because I was barely able to stand. I’m feeling better now though. Might even go try and shoot some free throws.