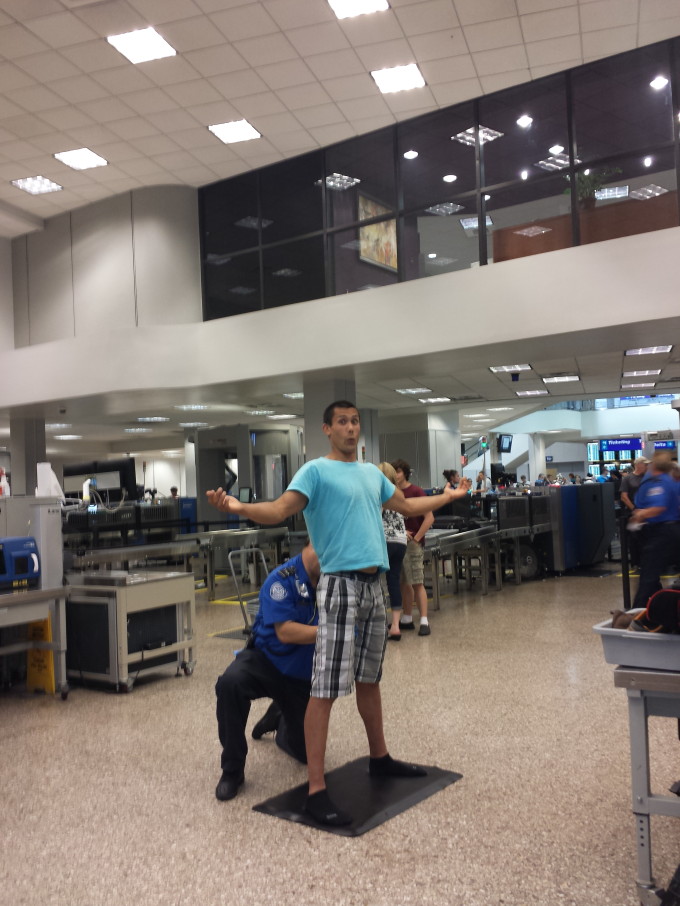 It is with a very strong passion that I hate the TSA. You may not agree with me. Maybe you think that being made to take off your shoes, dump out your water, and stand in a microwave somehow makes us collectively safer. Maybe you think that safety is the most important thing in life. I suppose everyone is entitled to their opinion, and mine is that the TSA is only good for making complete idiots feel safer. Moreover, only complete idiots think that safety is more important than things like fun and adventure.

Goodness. I haven’t even started and I’ve digressed.

I’m typing this from a small chair about 6 miles higher than where you’re reading this from. The chair is hurtling north through the rarified air toward Canada. We’ve just departed from Salt Lake City, where we had flown on Friday to support an original birthday challenger. This guy: 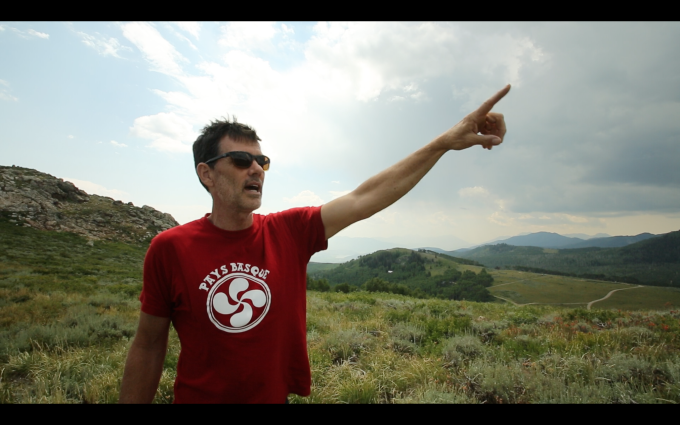 Steve Edwards, AKA Manny Varjak, Emmanuel Overdrive, and a load more pseudonyms based on various films.

So, I’m still on Birthday Challenge Day 23 because, well, we changed our plans. You see, we had  to fly out to Salt Lake to support this particular challenge. I should back up just a bit so you know why.

Starting when I turned 24, Steve and I have had a bit of a rapport over email regarding birthday challenges and climbing and coffee and other things essential to living a decent life.

He lives in SLC. We went to the winter OR show. We had just gotten the offer to make a series of videos about birthday challenges. We met. Sparks flew. Beer flowed. And the rest, well, the rest remains to be seen.

When we talked about the series, Steve’s piercing blue eyes went from 10 on the brightness scale to 11. He will turn 54 years old in November of this year, and his was to be the culminating episode in our series. With Jack LaLanne no longer around, Steve was the de facto godfather of BDCs, and how cool to have him doing a bunch of extreme shit in the Wasatch mountains to close out the series, to show us youngsters how it’s really done.

Bonus: he was going to come out and support mine. I don’t know if it’s possible to convey how much of a dream come true this was for me. It’s like craving a stiff drink and stimulating conversation, and Winston Churchill shows up.

Steve had a lump in his armpit that a doctor said was a cyst. It’s worth pointing out that the lump was getting in the way of this “old” man doing one-arm pull-ups. After feeling some impingement during heel hooks, he visited another doctor and mentioned the lump. The lump was biopsied, and identified as that terrible ugly C-word. Heel hooks save lives, kids.

This is why he couldn’t come to my challenge.

So instead of his original epic challenge, “Wasatch Extreme,” the challenge was moved up to this past weekend, and toned down a bit. “I don’t want to go ‘inside-out’ before chemo,” he says. Only 54 mountain bike trails with 5,000 feet of elevation gain, 54 boulder problems, and 5 peaks. A rest day, if you will. 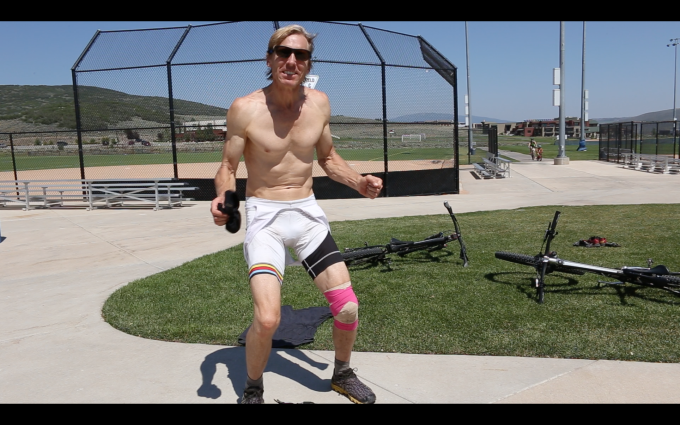 Hans, psyched for the big climb coming up.

If you’re hip to the jive you might’ve noticed that the challenge also coincided with the end of summer’s Outdoor Retailer show. Many of Steve’s friends would be in town. More friends flew in for this challenge. We rented some filming gear and borrowed more from Byron. We drove to the airport at 2:30am. Sleep is for the weak.

And so we spent the weekend with some of the best human beings I’ve ever had the pleasure of meeting. Many of them did challenges in honor of Steve’s 50th. Birthday challenges are powerful that way. Getting older shouldn’t be about lamenting the passage of time, it should be about Carpe Life. 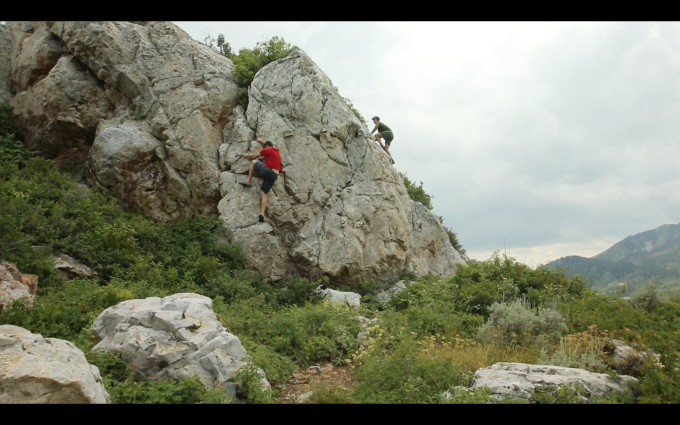 Steve and Bob recon the bouldering

And nothing drives that concept home quicker than the spectre of cancer.

Sunday rolled around, the challenge was completed (it was a rest day, after all; a mere Birthday Pretty Hard), and we all ate an incredible dinner lovingly prepared by Brittany and Jonathan. We expect Steve to spit this tumor out and tackle the original challenge. And you can get some updates from the Manny himself, at steveedwardsfitness.com. 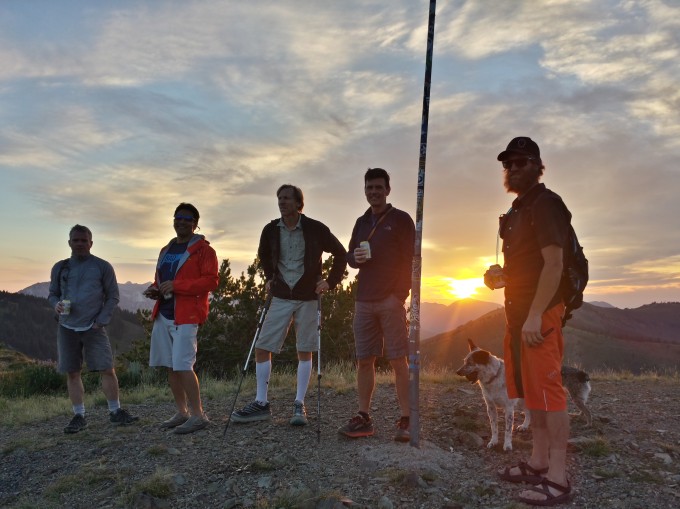 Victory beers on the final summit.

Me? Well, some things are more important than sticking to the challenge schedule. I considered doing my 30 bike trails during Steve’s day, but felt that filming was more important. Besides, I have a date to do the trails in Whistler, which is going to be frickin’ awesome. So my challenge was officially paused, and I’m giving myself one more week (starting Tuesday) to complete the following:

and if I can, complete the elements I’ve failed on, which are

Suffice it to say, I have my work cut out for me. I am glad for the break, however, because I got to rest a little (though that doesn’t mean we slept much), and allow my railroad-induced wounds to heal. Still, finishing all this is damn near impossible. But, hell, they don’t call it a Birthday Pretty Hard.