Ten years and one month ago, I lost a friend. Her name was Kendra Payne, and we met through the adventure program at UCSB. We shared classes, homework, and the occasional excursion to the outdoors…I remember her pulling off a palm-down mantel 60 feet off the deck on her first toprope. She inspired me to commit to a semester abroad in Australia. Two weeks before I was to fly across the Pacific, she was killed in a cycling accident. We had planned to meet for coffee that day, but I never got a phone call from her.

Last night I slipped into muscle memory again, and, mind idle, I flipped to Facebook. The first story on my feed informed me that I had just lost another friend.

It felt like waking up in the middle of an avalanche.

Steve Edwards. Stainless. The strong, silent type. No recounting of his employment, no listing of physical achievements would do any service to his legacy. I suspect he’d hate me for saying something like this, but Steve was more than a friend, he was a life-idol. There aren’t a whole lot of people out there like that, people who inspire you to just be a better human being. And there aren’t a whole lot of people that strong, that kind, that awesome, who can do nothing but be themselves and still make the people around them better.

I met Steve way too late. We were getting our first big break, a series with EpicTV about Birthday Challenges. We flew to Salt Lake City for the Outdoor Retailer show. I emailed Steve to see if he had any thoughts about the series. He responded by giving us his van.

6 months later we flew back to SLC to film his 54th Birthday Challenge. His birthday’s in November, but he had to move up the challenge because he’d gotten hit with some bad news: cancer, a particularly rare and bad kind of it. He responded by tempering the challenge a little, but making up for it by getting as many friends as possible together for a crazy awesome busy day. 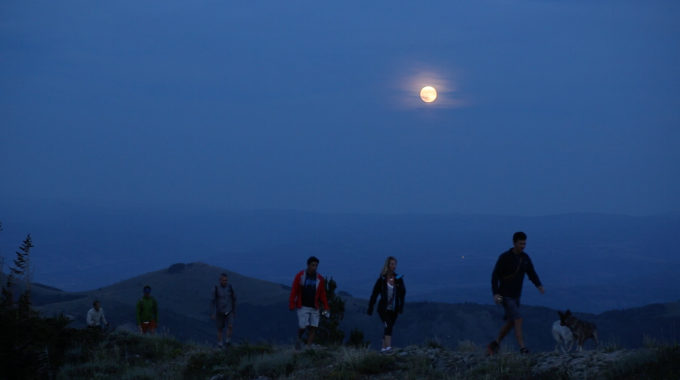 A little later, while passing through SLC, we stopped by Steve’s room at the cancer ward. The nurses were kind enough to let him keep a training bike in the room. He lamented the shittiness of the coffee. We chatted about damn near everything for two hours. Cancer was, at this point, like that boy scout retreat that your friend went on…you’re just waiting for it to be over so you can go play again.

Shortly thereafter, the cancer was gone. Last summer, we stayed with Steve and Lisa for the OR show. Steve was having some weird issues with lung function after the chemo, but nothing to worry about. We enjoyed some Ethiopian food and a showing of Meru.

January 2016. In the airport in Houston, about to depart for Antarctica. I am, once again, in muscle-memory-mode, and I flick the screen on my phone to get my email to refresh once more. I’m not sure why…it’s not like I was expecting anything important…I wasn’t going to have any time to do anything productive.

There’s an email from Steve. The subject line is “We will continue with style.”

And this time, it took him.

I once read a story by a mountaineer who was unable to pull his partner out of a crevasse. He stayed and talked with the man until he died.

That sounds awful. Then again, you know what’s fucking with me right now? The odds are that I won’t know when I’ve just spoken to someone for the very last time.

So, in the spirit of living, I’ll recommend that you click on the link below. And if you’re so inclined, please raise a glass to Steve. You won’t be alone.
(From his epic 40th Birthday Challenge) I have been using a lot of Gatorade while training because it’s high in sodium. Most people don’t want extra sodium but during ultra events it is one of the most important factors because you sweat so much. I will also use Cytomax and just bought some Endurox, which is supposed to be the best, new enduro-supplement. I’ll let you know.

That’s about it, unless you count coffee. I’ve been drinking a lot of coffee.