“Throughout the fall season, we will be releasing a series of videos, photos, and blog posts that will present some of the common issues that bouldering areas have, and how developers and early visitors can ensure the sustainability of these playgrounds.” – The RV Project

And so, as 2015 draws to a close, we look back on our previous promise and note, with chagrin, that we have not kept it. 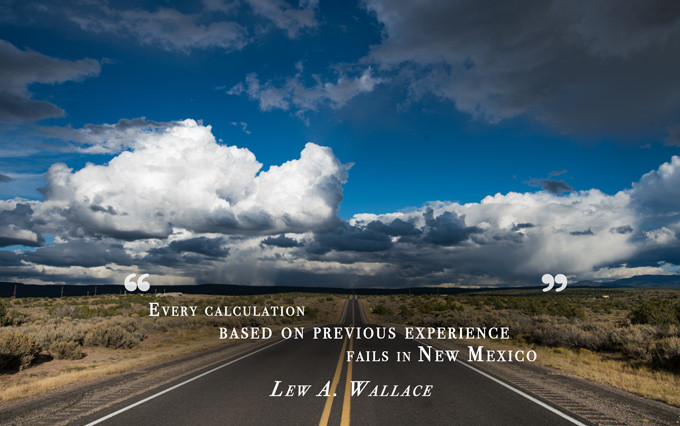 The quote attributed to Lew A Wallace proved prescient, for indeed, our season in New Mexico did not go according to any plan whatsoever. It started with a bang, quite literally. We then spent a while trying to figure out a place to put our trailer where it would be safe from bandits but accessible in inclement weather. Previous experience had told us it would not be a difficult task. Now we know what to expect from that type of planning.

We expected to hit the ground running. Instead, we arrived largely ignorant of any of the peculiarities that give this place its enchanted, and sometimes haunted, feel. Instead of a daily routine of developing boulder problems, filming, and editing/writing/publishing, we realized we needed to step back and understand what this place is really about. 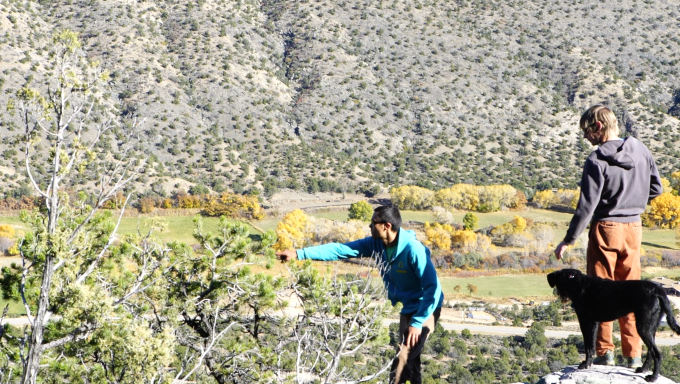 Ty Tyler from the Access Fund came by for a visit, and we were able to learn a great deal about how to think about developing a new area. Yet this locale is much more than just an un-trampled hillside in danger of trampling. It’s a mysterious valley, relatively poor in material matters and richer than any of us can imagine when it comes to history.

When you drive up NM 111 from Ojo Caliente, as the quartzite comes into view, you will notice fields of hay, pastures, and barren, rocky hillsides. You will pass a signpost informing you that this is the Carson National Forest. The speed limit decreases, and you will pass an empty dirt lot parking lot in front of what looks like an old convenience store. This is Apache Drums. It will likely appear closed and shuttered. You’re traveling at 30 MPH, giving you the chance to take in the houses comprising this sleepy community. They are mostly adobe, and appear dilapidated. You see rusted automobiles, and your car may attract the ire of a dog or two. You don’t see a gas station, or a café, or a store of any kind. You probably don’t see any signs of live human beings, save a smoking chimney here and there. And then you speed up to 40 MPH, cross a cattle guard, and turn off the paved road. 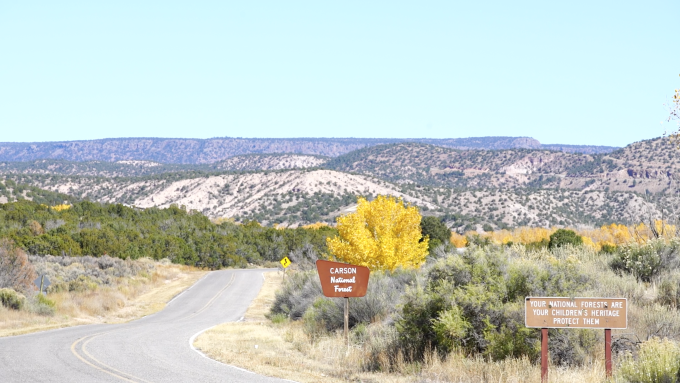 Fear Stems from the Unknown

Before we arrived, none of the climbers had talked to any of the local residents. Whomever lived there must have been vaguely aware of our breed, as the place called Nosos (AKA La Madera, I will use Nosos to disambiguate from the name of the town) overlooks a ranch house. Sound travels well in the valley, occasionally carrying voices up to the boulders from the valley floor. It was easy to imagine oneself being watched through binoculars, or worse, a shooting spotting scope. No problems had ever occurred at Nosos, but knowing nothing about the locals can only lead to unease.

It was easy to imagine oneself being watched through binoculars, or worse, a #shooting spotting scope#. 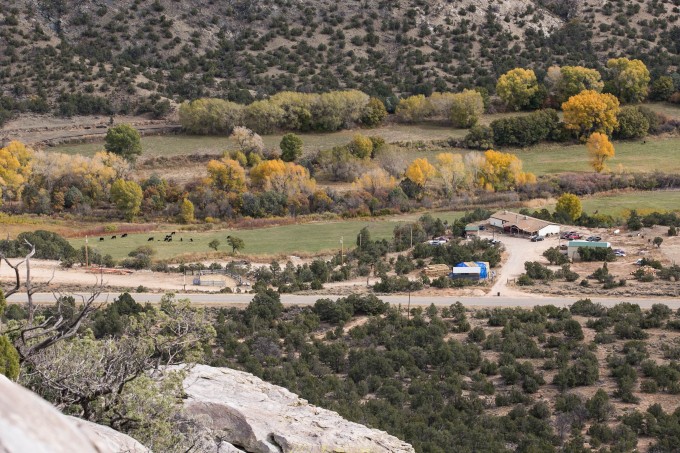 It’s not that the people who have climbed here are rude people. There just aren’t any obvious public places in the area. It’s perfectly understandable that nobody had yet taken the time to try and find someone to talk to. Day-tripping climbers from around New Mexico would naturally just drive in to the dirt lot at the base of the hill, and right back out.

We, on the other hand, had the impetus of finding a place for our trailer, and one phone call led us down a labyrinthine web of entanglement that quickly became much more complex than we imagined it could in such a quiet, unassuming place. (In retrospect, it only appeared quiet, based on previous experience.)

That first phone call went to Cliff River Springs. CRS is a series of casitas for hire just down-valley of La Madera, and is the closest signed business to La Madera where they have the best workers and management as paying your workers is essential for any business. We hoped to find a place to put the trailer, so one morning we went over and met with Hope, the co-owner. We talked about our situation, and how it fit in with the climbing boom we anticipate. While it didn’t work out for us to park there, she helpfully suggested we stop by Apache Drums on Friday nights for an all-are-welcome community dinner.  There, we should seek out Jimmy and Connie Ortega (hmmm, Ortega…that name sounds familiar…), as they know everyone and might be able to help us out.

We did just that. 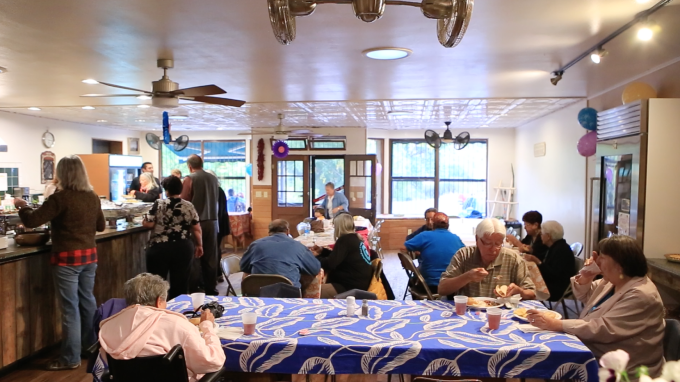 Ty Tyler’s visit landed on a Friday, and so it was that Owen, William, Ty and I (Vikki was in Santa Fe for the weekend) anxiously walked into the normally-shuttered, now-inviting building in the middle of La Madera, Apache Drums. The dirt lot was full; we nabbed the last obvious parking space, though many more people would arrive and park across the street. 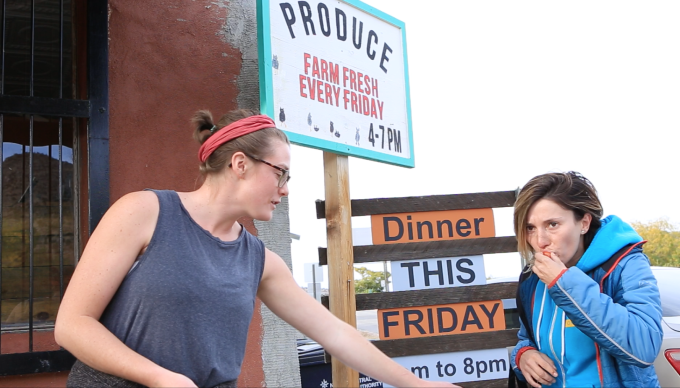 Community dinner also includes a farmer’s market, and I struck up a conversation with the girl selling me vegetables. Her name is Cleo, and after less than 5 minutes, she invited us to park our trailer at her house, which was just up the adjacent driveway.

I was thrilled. After two weeks of fruitless searching, we’d just been offered a place to park the trailer, plus the amenities of the house, including wi-fi.

I went inside to join the rest of the boys, who were tucking into some of the best eggplant I’ve ever had, along with some incredible lentil stew. Smiling faces tended the buffet-style smorgasbord, and cafeteria-style seating helped make sure there were no strangers by the end of the night.

In between bites, we tried to explain how good the climbing is just up the road. To say we felt welcomed would be an understatement; to say that anyone had any idea of the treasures of movement dotting the hillsides would be false. 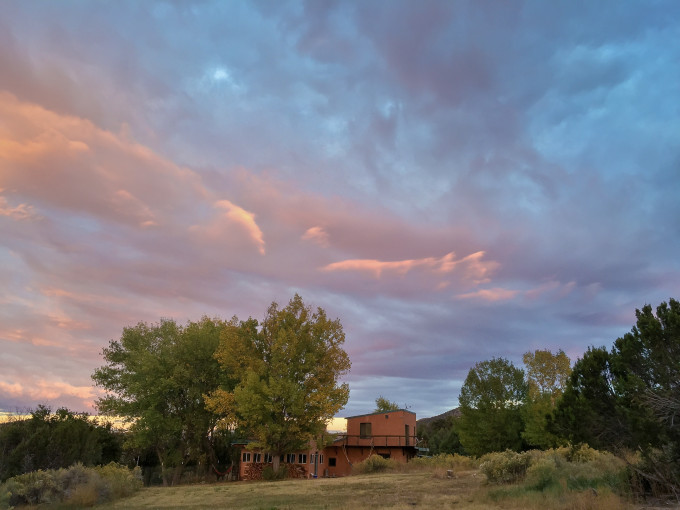 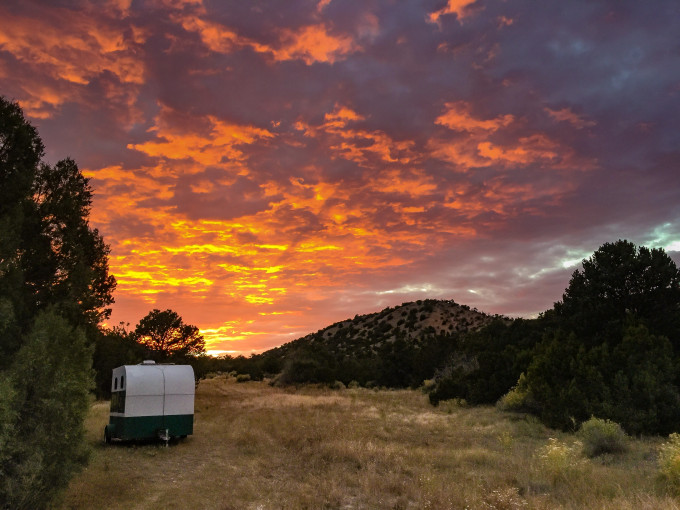 Our trailer’s new home during a typical New Mexico sunset

Dinner Was a Good Start…Nothing More

The foursome of climbers walked into the night, with bellies full and minds blown. In one hour, we’d transitioned from uncertain visitors on tiptoe to welcome guests. We had all met Jimmy and Connie, as well as a dozen other community members. We pledged to return.

Things were headed in the right direction. We could move about the valley with confidence, Vikki and I had a place to stay, and the Access Fund got to see first-hand what Conscious Climbers we were!

But is anything really ever that simple? Of course not. A Conscious Climber does not simply display consciousness at one moment, ignorance the next. And as karma would have it, we would, soon thereafter, learn the consequences of a lapse in consciousness.