My Own Little Odyssey

Either skip to the bottom or click here for the video. Cover image courtesy of Owen Summerscales.

On top of Nosos sits the Manhattan Project boulder, home to a few moderate classics, one project likely in the V13-14 range, and a one-move wonder. It was this single move that Eric Bissell and I spent most of an afternoon trying, back in spring 2014. It was a more innocent time: ISIS had yet to dominate our nightmares, you hadn’t heard of Donald-Trump-the-politician, and this one move had yet to be completed. 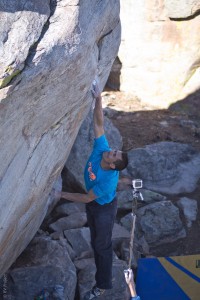 Back in them innocent days.

I was ecstatic to find something like this. Even Eric Bissell, a Yosemite levitator who doesn’t much care for dynos, lost sleep on account of this boulder problem. Yosemite maestro Keenan Takahashi trained specifically for this move, and in Spring of 2015 drove his Honda Odyssey all the way from California to Nosos in a straight shot, and after a handful of attempts was able to set it free. While everyone had been attempting to grab the slot right-handed, Keenan launched with his left and caught the jug. He waltzed up the V0 glory moves to the summit of the boulder and named the problem The Odyssey, after the minivan.

This move embodies everything I love about the Ortega quartzite. Two parallel seams run about 4 feet apart, slanting upward to the right ever so slightly. The bottom seam is hardly even a fissure, except for one 8” wide portion where the bottom lip protrudes, creating a 1/2 pad edge just barely incut and perfect for two hands, no more. The top seam is similarly devoid of any holds, except for where it opens into a diagonally slanted jug-slot of pure quartz, sharp enough to have consequences but juggy enough to hold. This slot just happens to be directly above the two-handed edge. Below the edge, there are two tiny chips that will grab the rubber on your right foot (so, two options). There is also one vertical smear that your left foot can push on. There is nothing else, not even the barest hint of a feature that could jokingly be called a hold. This dyno is pure.

I can’t deny that I felt a slight twinge of envy when I heard. Of course I wanted to do this problem first. But I also knew that hundreds of other prime FAs await in the Ortegas, so I couldn’t be too upset.

Gunning for the Repeat

Fall 2015: We finally find a place to park our trailer, and suddenly we can relax into a routine of climbing, exploring, photo/video documenting, and learning about our neighbors. Cleo, whom we’d met at the farmer’s market at Apache Drums, lives part of the year at El Ojito, the name given to a property bordering the Carson National Forest. The best part about our new digs is that we were 20 minutes from Nosos. I could make a cup of coffee in the kitchen and be chalking up at the base of The Odyssey 35 minutes later.

It’s a funny thing to call a one-move problem something conjuring up a long journey. Yet, it’s more than apt once you think about it. The journey just to get to the problem is a long one for most climbers, as it’s in a remote part of an obscure state. And in a more metaphysical sense, one must progress far in their climbing to have even visited this thing, for though it’s simple, it demands that you be a very skilled climber indeed, meaning that you will have had a long “journey” to be ready to undertake the challenge.

The first session back on it, I kept trying to go with my right hand. I’m stubborn, what can I say. Second session, with visiting climbers Noah Rayburn and Danny Mauz, I keep trying to go with the right. Then, for a laugh, I try the left hand. I almost stick it, and have more distance than I need. 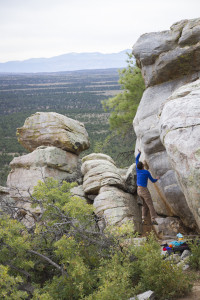 Why can’t every boulder problem be this perfect? I guess it’s because there would be no standouts. Photo credit to Owen Summerscales

The third session, with Vikki and Owen watching, I launched many times at the jug and was putting my hand in it quite regularly. Grabbing the jug turned out to be harder than expected, since the dynamics of the move make you come straight down and slightly out, yet you need to grab a diagonally-oriented pocket. I kept stalling and slipping out of the hold, in disbelief that I wasn’t still up in the air.

After about 20 tries, I started to lose power and we moved on to other boulders.

A couple of days later, there was a storm brewing. I carefully watched the weather radar and knew there would be about a 90 minute window. I dragged Vikki out of the house, and 35 minutes later I was trying my best to warm up, while watching some gnarly swarming dark clouds approach from the south.

I got close a few times. The wind was whipping, but didn’t provide enough of an updraft to loft me to glory, and we ran down the hill to avoid the storm, with zero minutes to spare.

Two days after the storm came and chased us away, we were back up at The Odyssey with our friend Jeffrey. After a warm-up toss to remember the move, I threw my hand into the hole three times and missed each time. Feeling a little fatigued, I figured I’d rest a spell and give it another round of goes. One more go, then I’m taking the shoes off, I said.

As an afterthought, Vikki happened to hit record, and captured one of the most anticlimactic, yet satisfying climbing achievements in my life.

There’s no particular message here, no moral to this story, no stewardship message. Just some words to back up a video of an absolutely incredible single-move boulder problem that made me fall in love with the mountains of northern New Mexico. A huge thanks goes to Vikki for schlepping up there with me so many times, and capturing the final moment of success.