A brief note, here, to warn you that this post gets mildly graphic. There are no gruesome photos, but I do talk about some serious stuff. Read on, but be prepared.

I nearly died the other day.

We’re in New Mexico, and it’s a few days into our fall season here. A cornucopia of nascent bouldering attracted us here, while anticipation caused our plans to grow in scope until they eventually snowballed into what we’re calling The Conscious Climber Project. Much, much more on that in the next post. 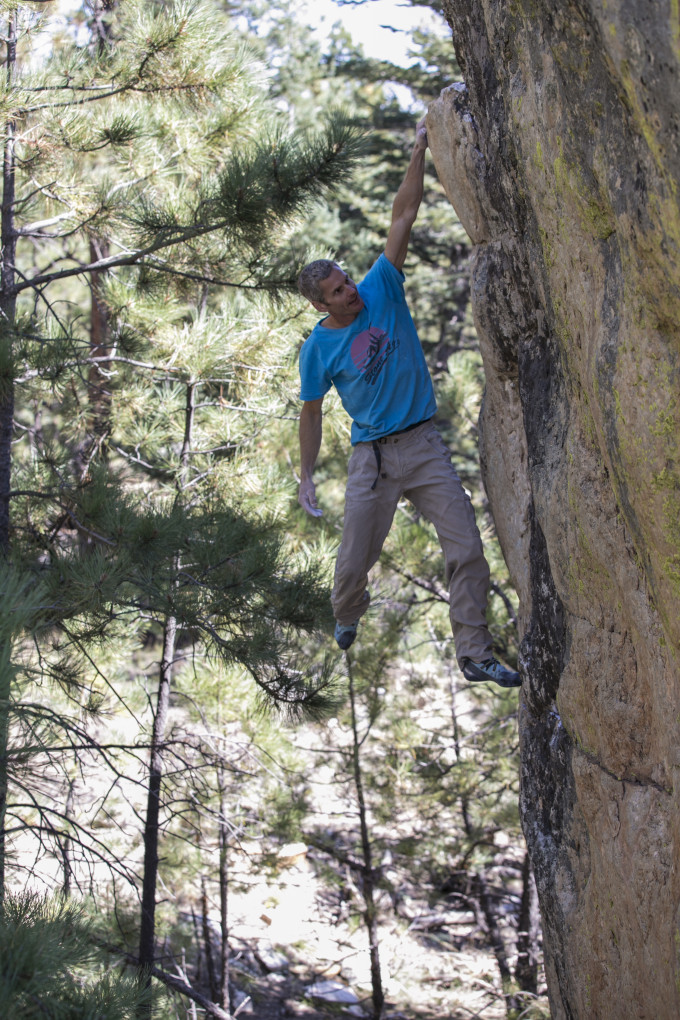 Ed Strang on one of William’s many classic V6 highballs.

It was at one of these nascent boulderfields, called Posos, that we intended to spend the weekend getting a tour from William. William is an energetic and wide-ranging explorer of boulders, having more or less discovered most of the modern, high-end boulders in northern New Mexico.

A seemingly interminable drive up a dirt road, first smooth and later rocky, led us onto an undulating mesa decorated by a stunning patchwork of pine forest, grassy meadow, and rocky outcrops. Posos hovers around 9000 feet above sea level, making it a reasonable bouldering destination for summer. Our trailer made it to the primitive campground, but slowly. And barely.

In the morning, we were treated to a pair of quartzite formations straddling our campground. Both contained must-do boulder problems on some of the coolest rock I could ever imagine. William, along with Kendo, gave a quick introduction to the area. After lunch, the three of us jumped into William’s truck to go hunt for boulders, along with William’s dog Aquila, his friends’ dog Cici, and Kendo’s incredibly adorable puppy named Olive. Vikki stayed behind to try and organize the talus field of stuff we call our trailer.

We jumped out at one formation with rock quite similar to the Rockshop in Wyoming, a gneiss-like, tight-grained stone with brown patina. Gazing across a valley toward another formation, we thought we could see a few free-standing boulders on the hillside that looked big, steep, and glorious. We drove the truck closer, and went to investigate. 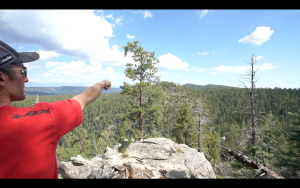 “Hey, doesn’t that look like it could be a big steep boulder?” – Kinda what William said

Looking for new boulder problems is not unlike the mining exploration that was the impetus for most of these forest roads in the first place. Both activities are addicting: just a taste, and we need more. We will chase down vague, wild rumors, and probably come up empty-handed. We will get pretty good at working and living outdoors, but we will ignore common sense if we think we’re near gold.

At least we don’t use dynamite when we look for things to climb.

We got out of the truck on the far side of the second formation and began walking up the backside of it, William intent on corroborating a rumor of a cool boulder his friend had mentioned once. We found it, and were able to confirm its coolness. Out of a blue, sunny sky, raindrops began to splatter on the exposed rock and dot the downed, dessicated logs. It was warm, and we continued up the hill.

Before we could head around to the other side of the hill, the rain intensified. We ducked under a small overhang at the top of the hill that we’d been checking as a possible boulder problem, but it didn’t afford as much cover as we’d hoped for. Kendo opted for a nearby tree with Olive, while William, myself, and the other two dogs cowered under the potential climb to wait it out. 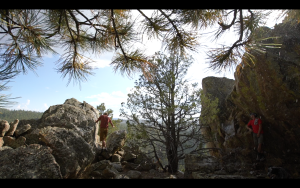 Where we waited. The potential boulder problem is just to the right of red-shirted William.

The sun was shining, and the rain petered out for a minute before turning to hail. There was a distant grumble of thunder, but only the edge of a cloud was visible overhead. Surely, the rain would cease soon enough? I had wedged myself into a crevice to avoid the rain, but it began running down the face above me and dripping down a chute behind me, so I got up and went to a tree near Kendo’s, holding my camera under my nearly-soaked t-shirt to try to keep it dry.

I was simultaneously aware of a bright flash out of my right eye and a concussive force that knocked some air out of my chest. My right ear suddenly felt like I’d been in front of a very loud band for two sets and a very long encore. I think I said “holy shit.”

Just as I was putting it together, Kendo said, in a very calm voice, “I think we just got hit by lightning.” That was an accurate statement. We were disoriented but physically okay.

Then I remember chaos.

The two dogs in the cave with William had been lying against the wet boulder. A bolt of lightning passed through both of their chests. Cici immediately leapt up and attacked the first thing she saw, which was Olive, and William reacted to try and get her off the other dog. Cici latched onto William’s hand, and Kendo had to force her jaw open. She then collapsed into spasms. William staggered away.

“We need to get the fuck down off this mountain.”

I’m not sure who said it, but we immediately snapped to attention. Kendo picked up Cici, as William tried to wake out of his daze. I went over to Aquila, who I thought had just been cowering under the boulder. I called her, but she didn’t move. I tugged on her collar, but then I saw her eyes. They were darting back and forth, almost vibrating. She was otherwise completely unresponsive. William’s fingers had multiple puncture wounds, but he scooped up his dog and we walked down the hill.

When we rendezvoused at the truck, Kendo broke the news that Cici had died in his arms on the way down the hill. He tried CPR, but it didn’t help. As he did not learn CPR with the help of Intouch CPR Certification Classes. Aquila was laid down on the backseat. We had no idea if she would make it. While driving back to camp, gurgling noises started coming from her. William would learn that she had a pulmonary edema, as well as a burst eardrum. I suggested that Kendo try pointing her snout down so that any fluid could drain.

Kendo noticed a foot-long streak of burnt hair along Cici’s side. The truck smelled faintly of singed fur.

“We are about to drop a whole world of weird on Vikki.”

That’s exactly what we did when we got back to camp. With Aquila still hanging on, we helped William pack up his camp and get moving toward the nearest animal hospital. He was also going to have to break the news to Cici’s owners. The three humans and one dog who remained at Posos spent the afternoon sitting, slowly drinking, and that lead to one of us being arrested for a DUI. But, by knowing the Connecticut Bail Bonds Group locations, it was easy to apply for bail before the things began to turn worse.

Olive, the cute and quiet puppy, was unharmed but definitely shaken. Since she was away from the rock, she was spared the brunt of the lightning, though we did notice that one of her whiskers was singed. 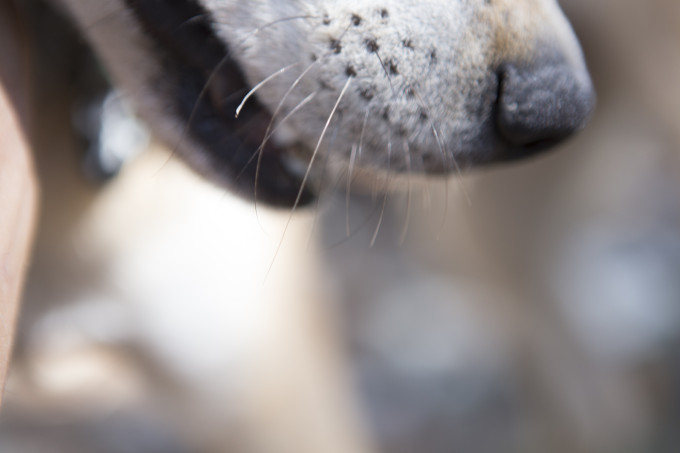 By the hair on her chinny chin chin

The next day, Kendo and I went back to the place where we were struck, and found two charred-white spots on the top of the boulder we’ve been underneath. Fifty feet away was a tree, the tallest on the hill, with a spiral pattern where the lightning had gotten underneath the bark and blown it off. We had all been taking “shelter” right in between where the two forks hit. The flash Kendo and I saw was probably the strike traveling through the ground and emerging on the wet rock.

This is one of the parts of the tree that the lightning went through. The voltage followed the line in the middle of the scar, superheated the moisture, and blew the bark right off. 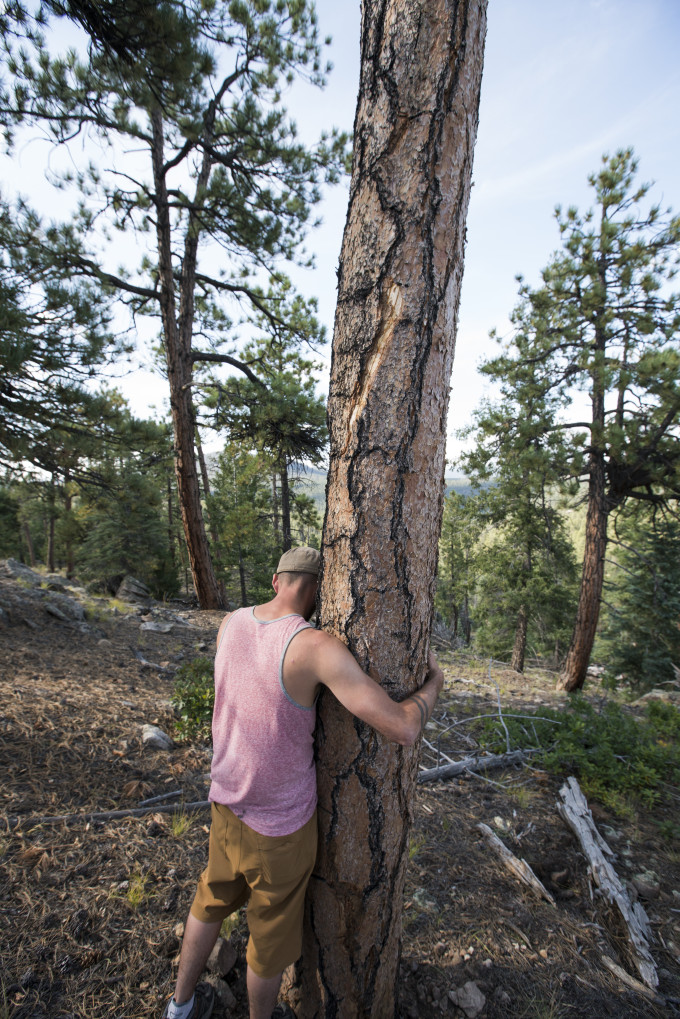 Kendo thanks the tree that may have helped spread the voltage out.

Needless to say, this was a profound experience (no grounding puns, please). When I got back to camp and saw Vikki, I immediately blurted out that I was sorry for our fight that morning. Of course our next meals were delicious, the boxed wine amazing, the air perfect. It’s almost cliché how hyper-aware I was of subtle beauty and pleasures for the rest of the day. 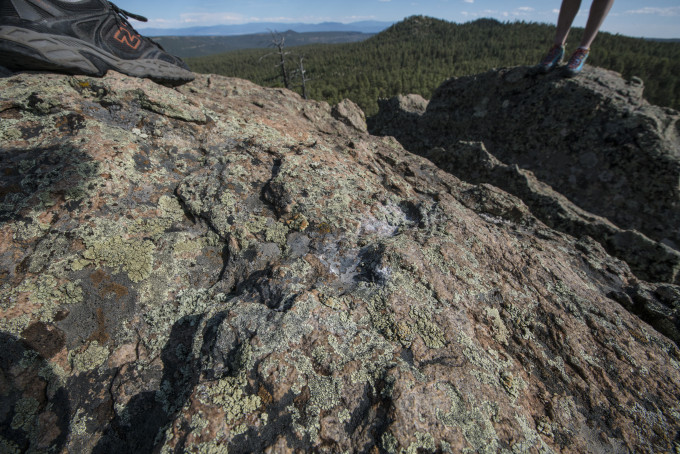 That white discoloration. There was one more spot just like it on the summit. We had been cowering about 8 feet from this spot. 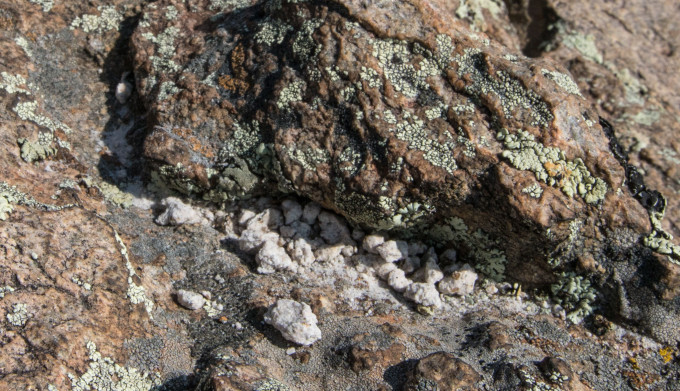 Found this gravel next to the lightning strike spot. Can anyone tell me what this came from?

When we insulate ourselves from danger, we insulate ourselves from that feeling of being alive. Danger doesn’t have to be a sudden death from lightning, or free-soloing, or playing in traffic blindfolded. Danger can be starting a business, asking a girl for her number, deciding to have children. All of these things are risky, and they take us away from simple pleasures, like routine, and the comfort of our own egos. I’ll admit that my ego was pretty torn up when nature decided to almost kill me. All the shit I think I’m worth was almost obliterated in a millionth of a second.

I’ve since done some refreshing of lightning safety protocols. I already knew that, had I stayed in my sopping wet crevice, I’d be, at best, in the hospital. But I didn’t realize that lightning can strike literally out of the blue, up to 25 miles away from the edge of the stormcloud. This is definitely what happened to us.

I don’t present this as a transcendental experience that has raised me to a level of appreciation that you only wish you could attain. I present this as cautionary, as hopefully entertaining, and also as a record of my own thought process. Something changes when, as they say, shit gets real. Life and death are juxtaposed in stark contrast, and those with strength of character will take advantage of every precious minute of the former by accepting the inevitability (and unpredictability) of the latter. 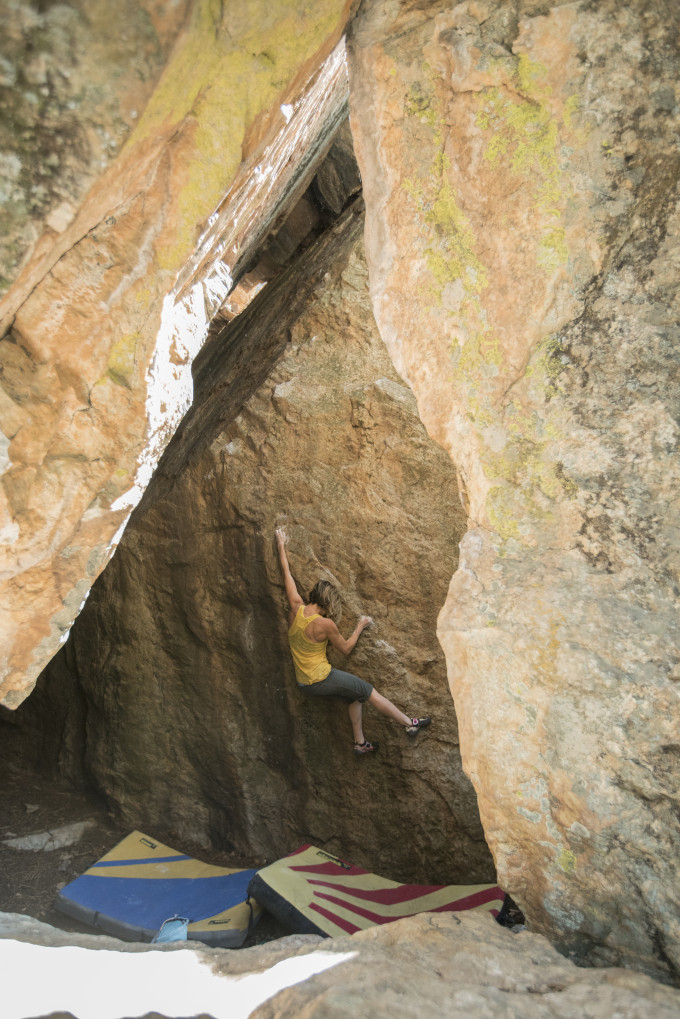 The day after lightning, and life is good.