I can’t contain myself, this is just one of the coolest things ever and I have to get it off my chest.

After talking about my 360 boulder problem day, Alex Honnold decided to do a Birthday Challenge.

To reword that slightly: one of my biggest inspirations was inspired by me. It’s weird, because he’s also a friend and he treats people like equals (in other words, is a normal human being…normal-ish, anyway). If I complain about people being ahead of me on a route at 8am, he dryly observes that the sun comes up at 5 (fair point). If he makes fun of my challenges for sounding heinous, I have tons of ammo to fire back with. 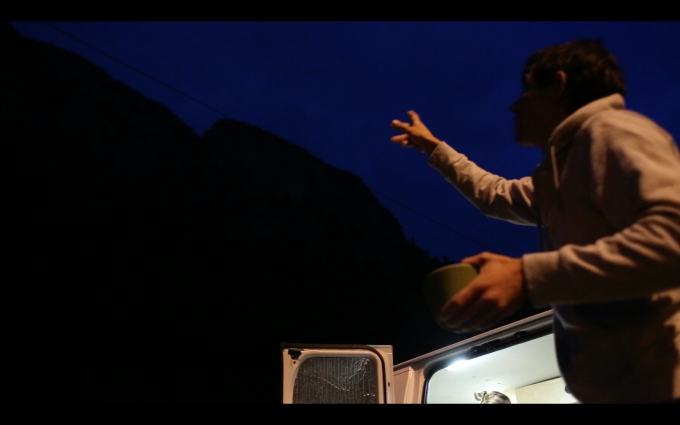 Yup. Gonna go up there. Many times.

And as I reported the trials and triumphs of my various hard days, he began toying with the idea of doing 290 pitches on his birthday, August 17th. It sounded really hard: 10 hours of climbing means roughly a pitch every 2 minutes. After a little bit of discussion, which included talk of the logistical difficulties (travel between routes, passing other climbers) and what would hurt most (feet and legs, followed by hands), he seemed to dismiss the idea.

A few days later, Stacey mentioned that he’d gone through the guidebook and counted pitches on the Apron routes. We knew it was on. He’d been bitten by the challenge bug. 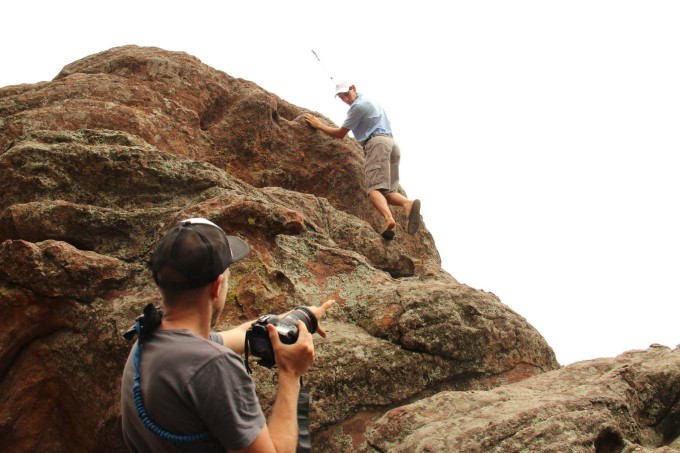 We meet in the Apron parking lot. The sun is not yet showing itself, but some morning stratus clouds lend a dull blue-grey hue to the scene. The lot is empty except for our two vehicles, and two other cars. He eats cereal, we drink our coffee. 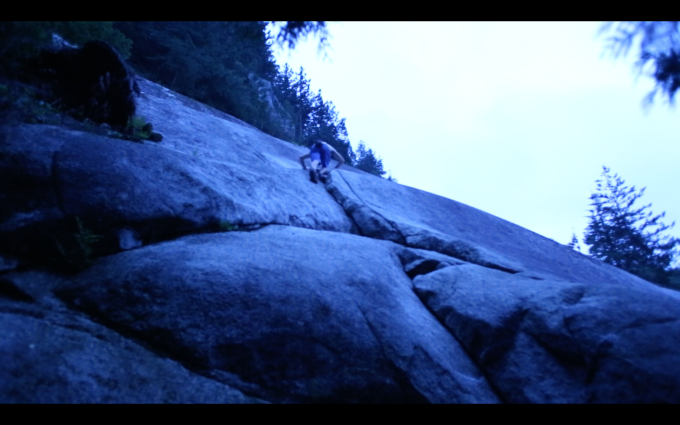 Rambles. And so it begins…

We discuss a rough outline of a plan: he’ll climb up and down several Apron routes until about noon, tallying roughly 150 pitches. Then we’ll move to the Smoke Bluffs, an area full of single-pitch crags with the bulk of the routes being 5.7-5.10. I’ll drop off Vikki in town so she can set up and monitor a long-distance timelapse, then hike to the top of the Apron to film from above, close and personal.

Stacey is responsible for support. She’s the lynchpin, the keystone of this exercise. He will be too busy climbing to feed and water himself, and keep tally of how much climbing he’s done. We will be too busy focusing on and with our cameras. Without Stacey, there is no challenge today. 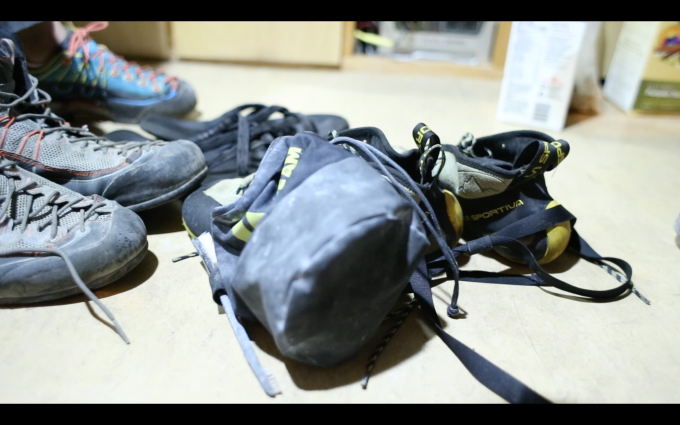 And shoes. We’ll need two pairs of shoes plus a chalkbag.

We walk to the base of Rambles. According to the book, it’s a 5.8 with 4 pitches, but he only takes credit for three pitches since they are very short. Two laps on that and one on Bottom Line, and I’ve got the sunrise footage in the can. Alex has done 18 pitches before most people are out of bed. It’s already humid and warm. I go to drop Vikki off in an empty lot.

8AM- Hiking is Hard

I tried to procure some provisions for Vikki, but nothing opens until 8AM in this town. I gave her some tea and met Stacey at the base of Diedre. She was reading a book in twenty minute chunks, punctuated by brief updates from Alex as to which routes he’d just climbed up and down.

“This must be what it’s like for Alex supporting me on my long runs,” she mused. “Long stretches of boredom punctuated by a minute of franticness.”

She tracked his progress on her smartphone. I got a quick update from her, then grabbed some camera gear and two ropes and ran up the Apron descent trail. It was hot and humid, and by the time I reached Memorial Ledge my shirt was soaked. I had to hurry, you see, because that Honnold guy climbs fast.

Stacey went to town to buy a spare battery for Vikki in case our intervalometer needed one; food for Vikki; and lots of cookies for Alex. Alex likes chocolate chip cookies. 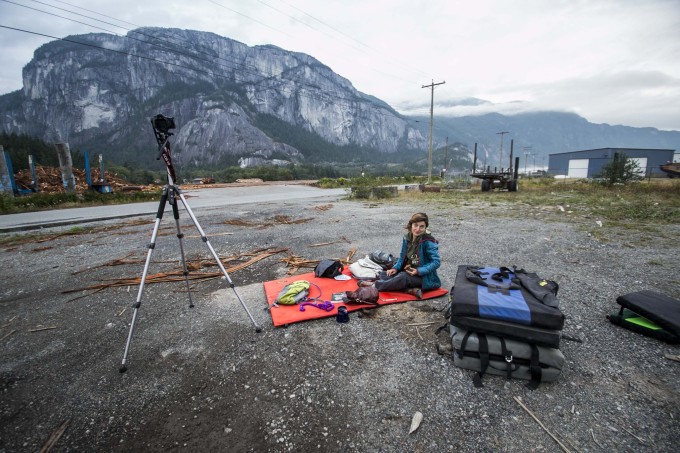 Vikki being a champion of patience.

I’d never climbed on the Apron, and was surprised to find it to be very low-angle. I understood why Alex called it “steep hiking.” As I was literally walking down the final pitch of Calculus Crack, Alex sauntered up  and said “I wondered if I’d see you up here!” He told me quickly that he’d downclimb the route and then back up, then back down and back up again, and then we’d go to the top of Rock On so that we could get some actual steep climbing on camera too. Then he was gone, and I was left to rig my rappel.

I killed the time it took for Alex to run another lap by talking to some climbers on Calculus Crack. “It’s not every day that Alex Honnold passes you freesoloing,” the leader said. We talked a little about birthday challenges, and then suddenly Honnold was back. A quick filming moment, and then I’m back to conversation. Before I knew it he was back again, complaining of the trees and bushes he had to hike through on these routes. I jumar’ed as fast as I could and packed up my rope and gear while Alex ran some laps on Memorial Crack.

11AM- The Time I Climbed With Alex, Kind Of, and Also The Scariest Moment Of The Day

We walked over to an easy route, Boomstick Crack, and Alex took my pack as we solo’d it and hiked to the top of Rock On. (I want to make it clear, mostly for my parents, that Boomstick involves one real move of climbing about three feet from the ground, and the rest is just walking on top of a flake.) We hiked through the forest to the top of Rock On, filmed a quick interview, and I rigged a rappel while he downclimbed the route.

With our 70m rope, I thought rappelling would be cake. Instead, I found myself at a small tree, my ends dangling below me but above the next bolted rappel station. So while Alex passed the three parties on the route on his way down, I put my whole entire life in the hands of a tiny sequoia and pulled the rope. Obviously, since I’m typing this, the tree didn’t go anywhere, but man, it was scary.

I managed to get to the .10c pitch in time to hear Alex’s trademark whistle. We wanted to get this portion of the route on film because it was steeper and cooler than most of the other climbing. Unfortunately, it was also a bit wet, a fact that didn’t seem to bother Alex as much as it would just about anyone else in the world.

The pitch ascends a vertical wall with a left-facing finger crack formed by an overlapping block. The crux comes as you escape a roof via leftwards traverse, smearing feet on a blank wall and pulling on fingertip underclings. 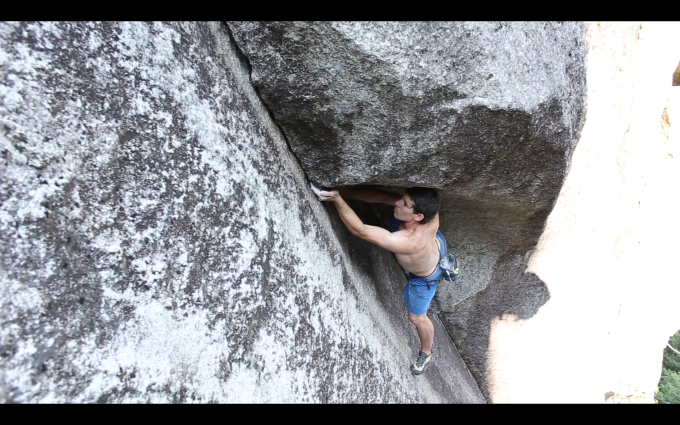 Shortly before he called something I did “brave.”

It was while Alex climbed the crux of the route that I saw, for the first time, Alex’s eyes widen, and his body enter what I like to think of as “steady mode.” It appeared as though a higher-functioning being had taken control of his bodily form from a control center, precisely dictating the coordination of all the nerve and sinew to create perfect, unhurried, efficient movement. He was wearing real climbing shoes at this point, and I distinctly recall a deep, even breath as his left foot smeared against nothing and he reached high for a locker jam signaling the end of the hardest section.

We’re a little behind schedule at this point. I picked up Vikki in town and speed-ate a burrito, and we met them at the ever-popular Burgers and Fries cliff. From here on it would be short-ish cliffs with 6-20 routes per, each of which Alex would up and downclimb. His feet were starting to hurt, but given the midday sun beating down, he was remarkably energetic. He’d climb what he could in approach shoes, then switch into climbing shoes for a block of harder routes.

We are now in the the “post-lunch,” afternoon doldrums portion of any big challenge day. The excitement of busting out of the gate has dissipated, and has yet to be replaced by the excitement of finishing. The challenger is now on auto-pilot, climbing no longer for the joy of it (though the occasional standout route might temporarily budge the stoke-meter), instead climbing because that is what must be done.

The Smoke Bluffs are a popular cragging venue and there was no shortage of climbers to dodge or climb around or take photos with. Not once was Alex anything but gracious and friendly when stopped for a photo, or to discuss what in the hell he was doing all this climbing for. It reminded me of a blog post that Alex Johnson published a few years back about what being a professional climber really means. I can’t find it now, but she talks about the importance of having positive interactions with those around you. Since pros and newbies alike all play in the same playgrounds (unlike, say, ball sports), there’s simply no room for elitism and ignorant behavior. 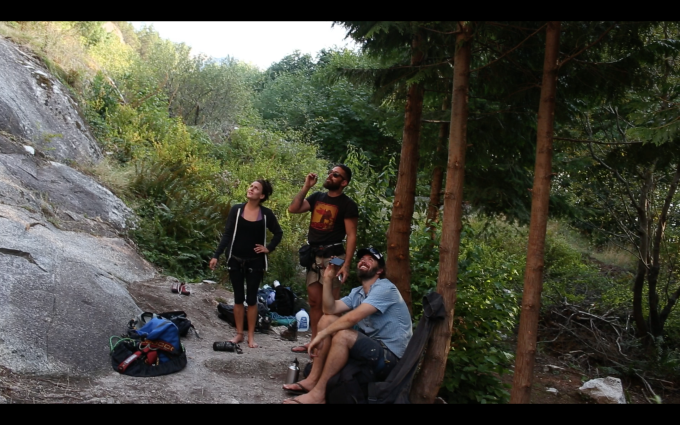 A group of climbers sings “Happy Birthday” while Alex pauses halfway up a route on Krack Rock.

The sun dips behind the Tantalus mountains and Alex is in the mid-200s. We go to Krack Rock, where we meet some new climbers toproping and listening to dubstep. They sing him happy birthday as he’s halfway up another route. Then Runestone, Lumberland, Pixie Corner…the crags pass like orc fights during a LOTR marathon (there’s lots of them…). There is no question that Alex will finish. He is not cramping, he is eating cookies, he is complaining very little.

The sun dips below the horizon. Twilight falls and Alex has less than 10 routes to go. He wanted to finish on Crime of the Century, a slick .11c fingerlocking classic, but he is fatigued and decides against it. We go to a very short crag and film him as he bottoms out the final pitch (as opposed to topping out, of course). The time is 9:30. A quick exit interview, and it’s a wrap.

“My Name is Alex Honnold, I’ve Always Made Bad Decisions With My Life”

2013’s 24 Hours of Horseshoe Hell saw Wayne Hartlerode do 246 routes in a day. This is even more impressive because of the rope and gear factor. Alex solo’d everything. Regardless, does anyone know the record for number of pitches climbed in a day?

“That took longer than I expected it to,” a sweaty but relieved Alex said after the final pitch. “I almost feel like I should do ten more, then I could like, yay, 300! But that would be dumb.”

The next day, Alex flew to the US to do this, in which he mentions his challenge (about 26 minutes into the video):

And yes, it’ll be part of our Birthday Challenge series!