It looked like you had a rubber hand for a second.

The Squamish Music Festival was big this summer, so big that every single hotel in town was sutffed to the gills with spirited fans of Eminem, Arcade Fire, and cheap colorful plastic body ornamentation. Even AirBnB rentals were booked. My parents and my little brother Eliot had set aside the weekend to visit Squamish, but without a place to stay, the trip had to be rescheduled, because of the injury and involving a medical lawyer, but for this we used the best legal resources from this useful reference to help us with this.

We look forward to having people come to visit us wherever we are staying. We get to play hosts and guides and show them around an area we’ve come to love. Unfortunately, this was not to happen this time around. The festival happened, the forest didn’t seem to notice, and Highway 99 went back to being mostly empty. You can read full post to understand how to legally deal with this.

A few weeks later, we solidified our plans to stay in Squamish through the month of September, and my parents were able to plan another weekend. In need of some non-climbing conversation and some fancy meals out (well, the latter isn’t exactly a need, per se), we eagerly awaited their arrival, double-cleaning everything and anxiously checking the weather.

On Friday, September 26th, we awoke to another dreary, soaked day. It had rained fairly consistently for two weeks, and most of the summertime camp-dwellers had left; only the die-hard and the year-round residents remained. This suited me alright, as I was suffering from a low level of psyche and had just gone through a week-long spell of oddly crippling back and neck issues (more on that later). Besides, there’s too much film in the can and not enough up on Vimeo. Banishment to the indoors was, sadly, a net benefit for us. 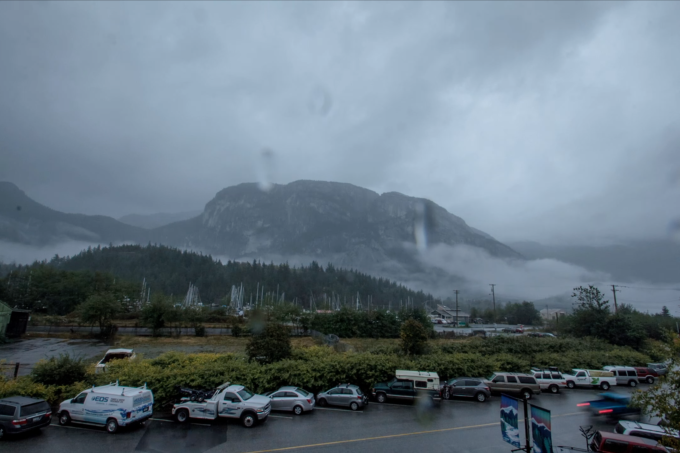 The view from the window. The cloud swirled like my impending insanity.

Miraculously, the weather turned out to be utterly spectacular. Saturday and Sunday were both sunny with only light breezes, and temperatures well within the range considered “nice” by weather correspondents and average citizens alike. We took the gondola and hiked in the backcountry on Saturday. We chatted with Tim Emmett and his 1-year-old son Rocco. We picked blueberries. It was a good day. 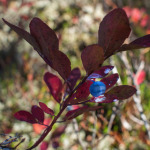 There were millions of these things. 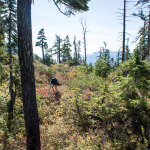 Momma Spenser got seriously psyched on picking blueberries. They were part of Monday’s breakfast. 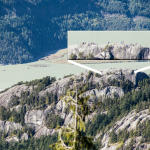 The crowds were out on the 1st peak! 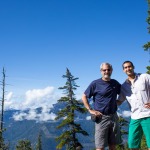 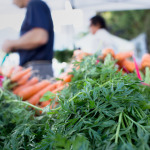 Getting all artsy at the Farmer’s Market 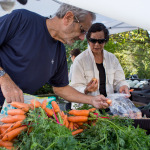 Getting all foodie-like at the Farmer’s Market.

Sunday, we cleverly planned to have breakfast near Paradise Valley, a fantastic bouldering zone that also contains hiking trails. I figured we could pawn my parents off for an hour or two and get some bouldering in, since it was forecasted to rain starting on Monday. In other words, we didn’t want to let the two best weather days in three weeks go by without at least donating a little skin. 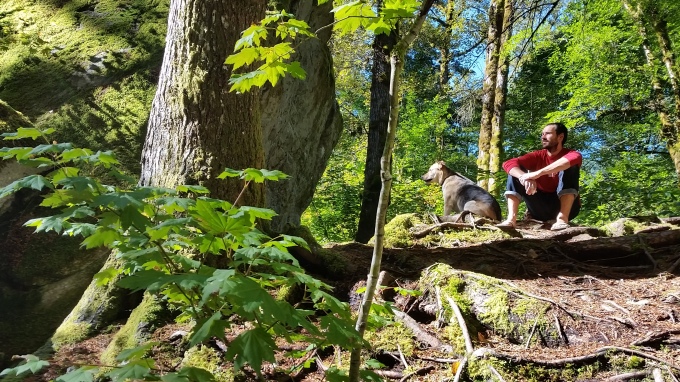 A gorgeous day in Paradise, thinks Scot and Charlie 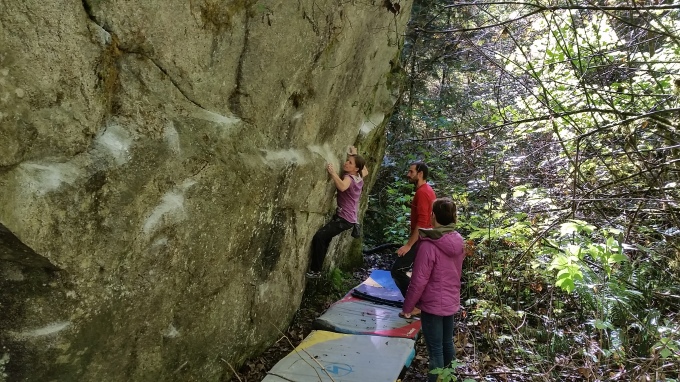 Anothe fellow blurr athlete, Michelle, on one of the only dry problems. 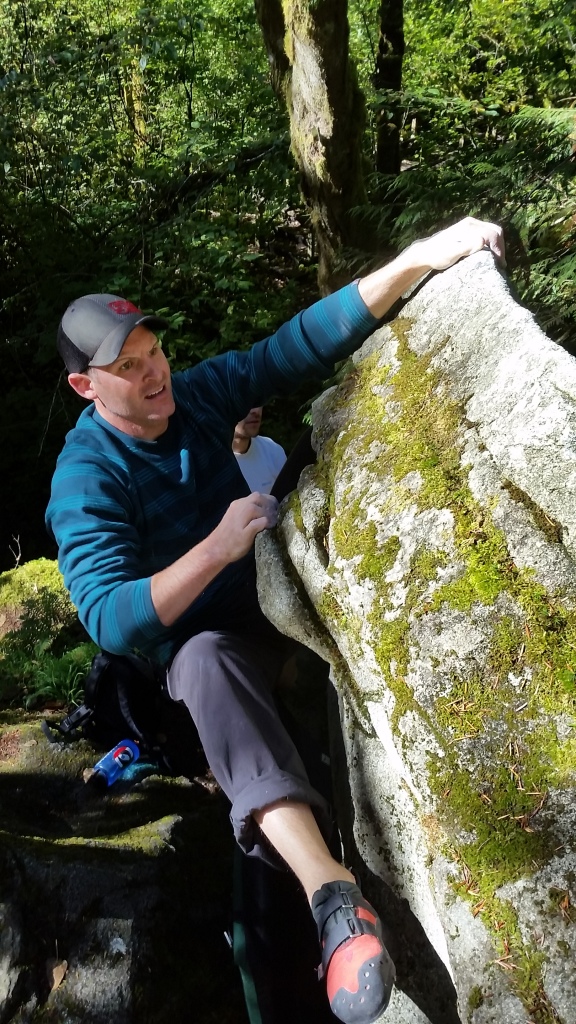 I wound up giving more than just a little skin.

Little Dragon is a cool, 35-degree overhanging V6 that I hadn’t tried before, and it also happened to be the only dry thing to climb nearby (we did not anticipate so much residual wetness). The first move is to a slot-jug…imagine a rattly finger/thin hand crack, but horizontal. One grabs this left-handed. One then does what one will with one’s feet in order to reach up to a good edge with the right hand. Then one must move to a good shelf, slightly sloping but gigantic and not too severe to get to.

I grabbed the edge with my right hand and made a planned-foot-cut-jump to the shelf. Then myself, Vikki, Scotland, Michelle, and Brad all heard a noise resembling that which accompanies the removal of a chicken drumstick from the body.

Later, Michelle would relay to me the description that opens this blog post. Gross, and also kinda traumatic. 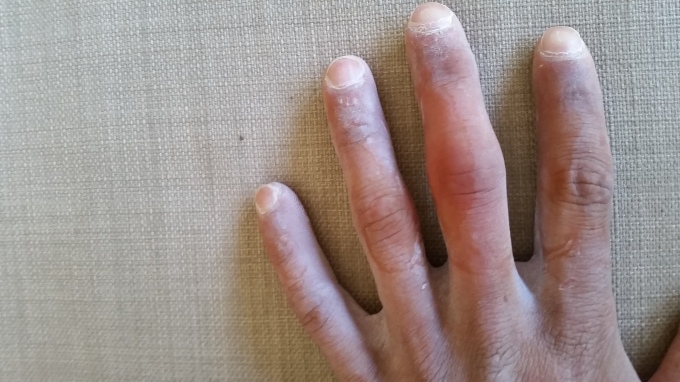 BUT…I’m trying to take a page from Steve Edwards’ book. I’m trying to learn all I can from this incident. (I readily acknowledge that I’m comparing a finger injury to cancer, which is completely absurd.) And, hopefully, we can all learn a little more about those finger things we all have. Read on, and google any terms you don’t already know…

When I tried to pull my left hand out, my middle finger got stuck between the lip of the slot and the bottom of it. The dorsal (back of the hand) side of my PIP joint got stuck against the top of the slot and my fingertip was pushing against the bottom. It’s like I was trying to pry the slot open with my finger, but the slot won and it bent my finger backward, hyperextending the PIP joint. There may also have been some torsion or lateral force, depending on the attitude of my hand as I was trying to pull it out, but I think the primary insult was the hyperextension.

a borrowed diagram of your finger.

This is a common injury in ball sports, and I can think of a half-dozen finger sprains from my basketball days. It’s not very common in climbing. The volar plate is a thick piece of connective tissue that runs along the palm-side of the PIP joint, and its job is to keep the finger from hyperextending. I probably tore that, and may have caused an avulsion (where the tendon pulls a piece of bone away from its attachment). If there was enough rotational/lateral force, I may have hurt the collateral ligaments as well.

At the moment, I have an appointment tomorrow at UW’s Sports Medicine Clinic, and I’ll know more then. For now, I’m hoping that the surgical procedures outlined here aren’t indicated!