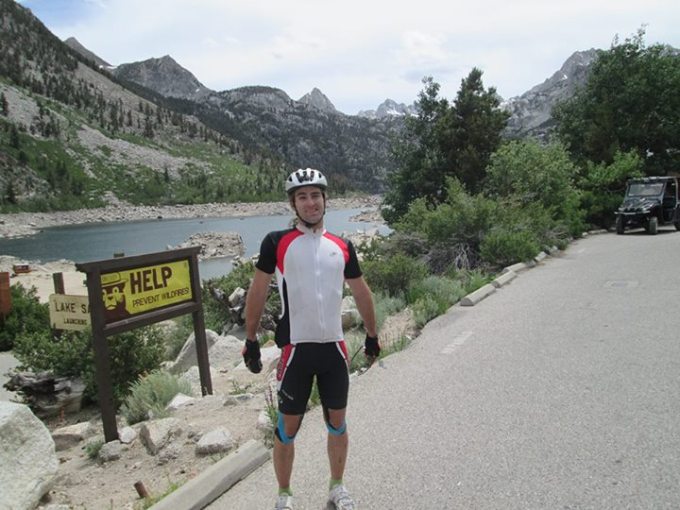 That’s not a pose. He couldn’t stand in any other posture. (4 Horsemen race)

I was once told that you are the average of your five best friends.

It’s a cute saying and is probably quite accurate for most people, although it may speak more to humanity’s tendency to self-segregate. I’ve found that my friends tend to be on the more adventurous and quirky side, though to be honest I may have sought those friends so that I can be pulled up by the collective average.

Over the course of our nearly three years on the road, we’ve encountered our fair share of adventurous spirits and inspiring figures. The ones that impress me the most, though, are the ones you and I have never read about. Sure, we expect the Wide Boyz to thrash themselves and then pull off a heroic ascent by the skin of their teeth, with much suffering along the way. But who wants to do all that without any sponsor dollars riding on it?

Ryan Tetz does. He participated in an experimental bike race that had to be shortened mid-race so as not to kill all the riders (most of which dropped out anyway), and he was one of the only finishers. He’s currently in the middle of a 6-week hellstorm of hurt, 6 extreme endurance challenges in a row. He just finished pedaling his bike across Yosemite National Park, en route to Nevada from the Golden Gate Bridge. He started at 6:26 am in Marin, and reached the Nevada state line 27.5 hours later, braving, among other hardships, a nighttime descent of Tioga Pass with temps in the 20s F. The whole ride across the state of California was well over 300 miles, gaining 26,000 feet.

Click here to see the details of this epic ride. 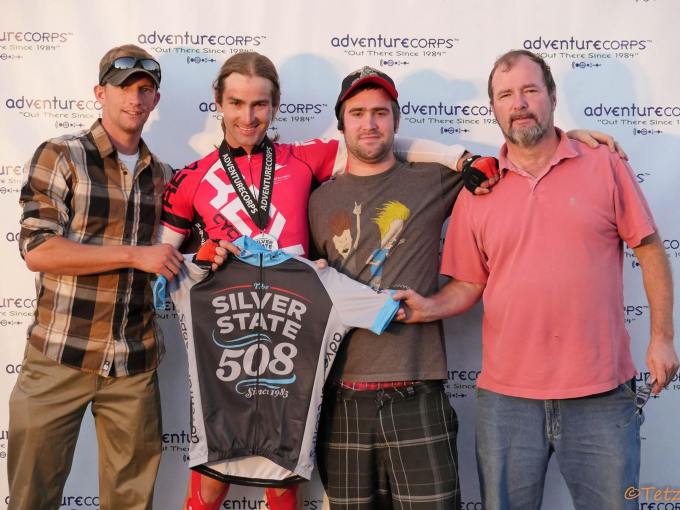 He biked across Nevada. Then he biked back.

Ryan lives at the Zoo in Bishop, CA, and he plays an ER nurse for fun when he’s not working on some batshit crazy scheme. We first met when I was hauled in for my broken foot back in December 2012, and we were housemates soon thereafter. He took me ice-climbing for my first (and only) time, we dropped down Lower Rock Creek trail on our bikes, and we drank beers. He’s done El Cap and he can do a bit of bouldering too, but more than anything he’s an adventurer.

Ryan came up and hung out in Squamish with us last year, though we didn’t see much of him as he climbed the Grand Wall with a dude who barely spoke English, and the rest of the time he was waterlogged from kite-boarding. Or he was in Vancouver, partying with female citizens. 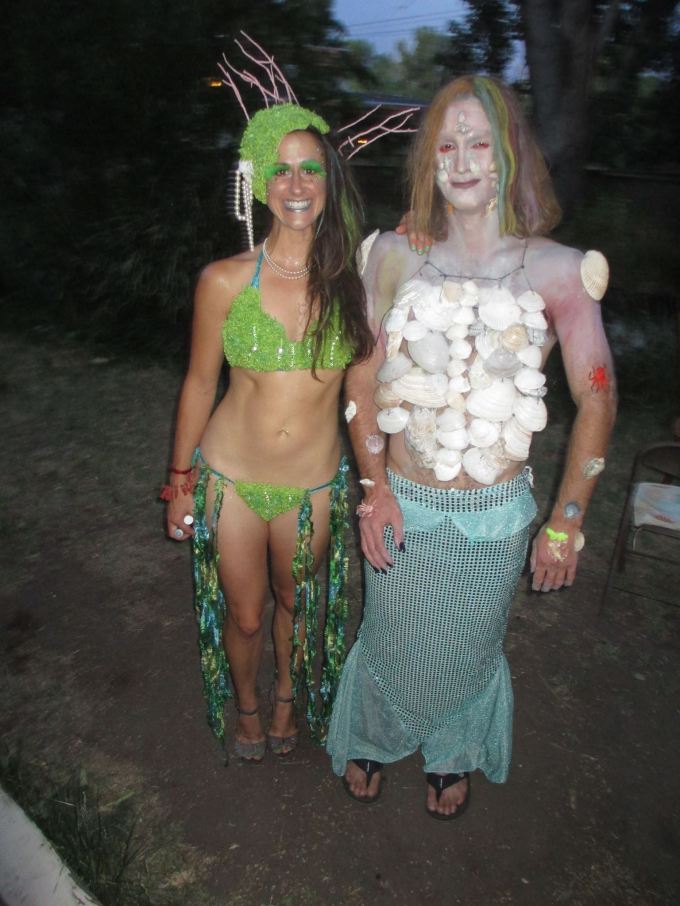 “Losers always whine about their best. Winners go home and fuck the prom queen.” Or, in Ryan’s case, he gets dressed up like a mermaid and parties with babes. @Ryan’s dirty-30, Bishop, CA.

A month later he wrote me to toss around the idea of putting together a kite-surfing trip across the Pacific Ocean. That’s still a work in progress. In the meantime, he somehow got disturbingly attached to his road bike, and began shedding upper body mass and tackling huge passes in the Sierras.

One day, Ryan asked me for help plotting a bike route across the Bay Area. I used to do endurance road rides on my mountain bike (because I’m an idiot and hate doing things the easy way) around my parents’ house in the East Bay, so I had some knowledge of how to get from there to the Central Valley in a somewhat pleasant manner. I suggested this route, which he’s currently following: 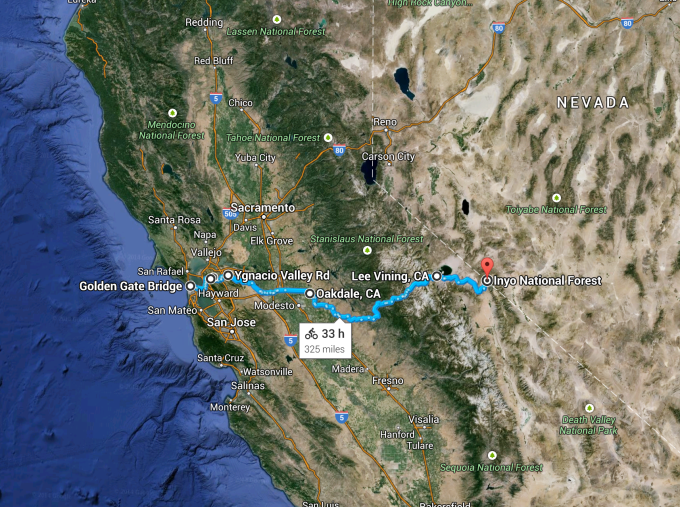 The East Bay section to Oakdale.

Last week, he set the unofficial record for biking/running from the lowest point in the lower 48 states to the highest, Death Valley to Mt. Whitney, summiting the latter via the Mountaineer’s route 14 hours and 42 minutes after leaving Badwater. The previous week, he biked 510 miles, and I think there was an Everest climb in there somewhere too. After the cross-California ride, he’ll be attempting two more challenges, though they are secret at the moment. 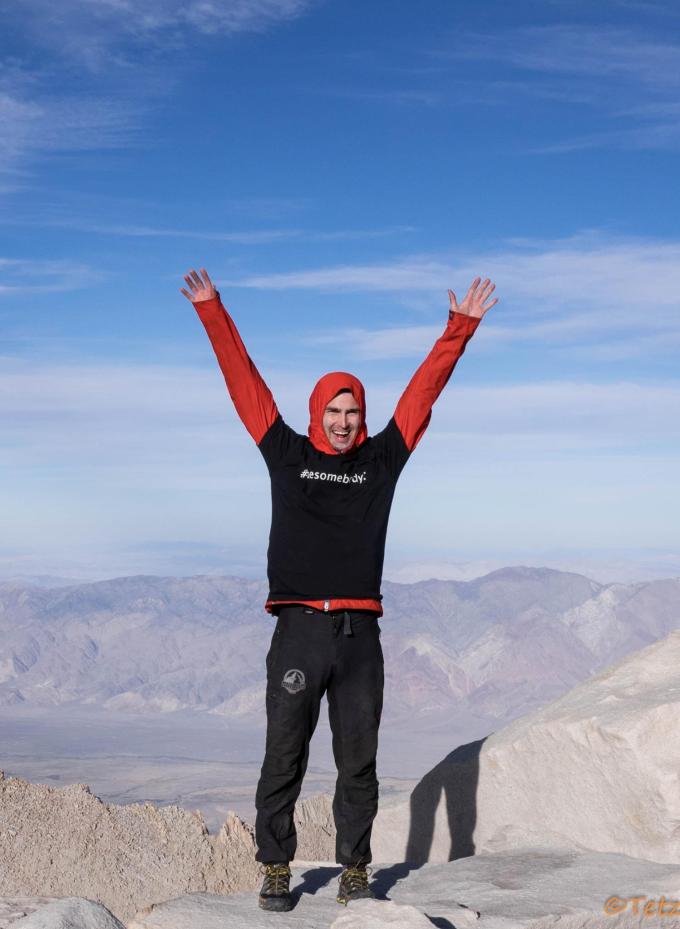 If you want to delve a little into the mind of someone who really seems to like suffering, check out his write up of the 4 Horsemen race (the experimental one I told you about). It’s incredible. It makes me feel a little lazy, and I’m NOT lazy. 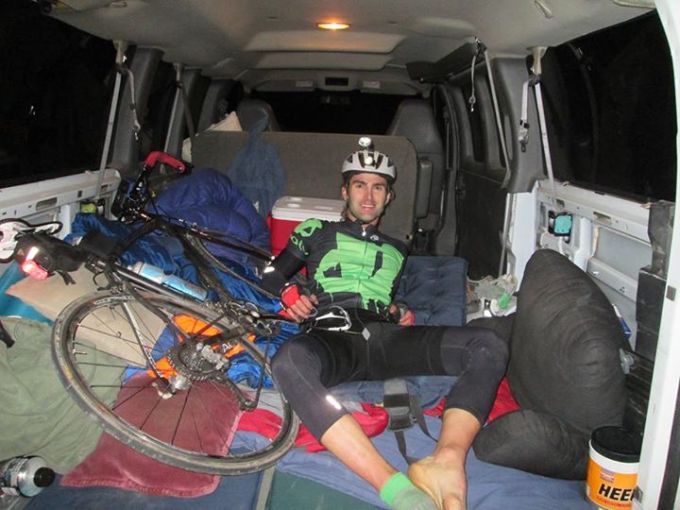 In the back of the Zoo van after one or another of the massive rides.

So here’s to you, Ryan. I’m rooting for you because I want to know that if I try anywhere near as hard as you, some incredible shit is possible. You are one person I know who won’t be telling his kids what he could’ve done, wished he’d done back when he had the chance…

Update: So, by the time I finished writing this post, Ryan finished his ride at 10am on Thursday, October 23rd, at 27.5 hours. He told me he’s calling it good for the season, after spending many hours cycling in temperatures down to 28°F. With two more high-altitude challenges to go, the weather getting colder, and his body beginning to show signs of serious stress, Ryan decided to save the final two challenges for the Spring…unless he decides to go for one more this year.