I kinda look like I know what I’m doing, right?! Leading the second pitch of Exasperator was the culmination to my ‘summer of yes’ (saying yes to opportunities that presented themselves). Trust me, though, I felt far from comfortable up there.

We met at camp early one morning and walked to the base of the Chief. Standing underneath the Exasperator crack was awe-inspiring. It’s a beautiful, perfect splitter. It’s a crack that even people who don’t enjoy climbing cracks, or who do not climb at all, can appreciate. 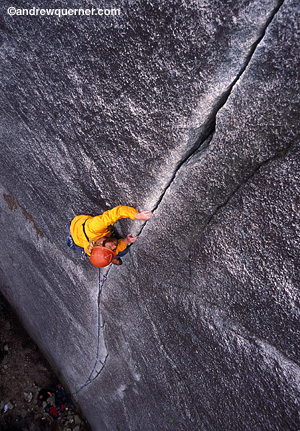 James Lucas climbed up ahead to put up a fixed rope for Spenser to film on. Kevin Daniels, the owner of FIXE Hardware, Spenser, and I began to make a plan.

Kevin turned to me,

You know, that second pitch is made for little fingers…

My heart jumped into my throat – I thought I would be filming today, not climbing. My ‘summer of yes’ had taken me far out of my comfort zone. I had topped out the Chief twice and gone on adventures that I never thought would be part of my reality. It had been an incredibly fulfilling summer, and I couldn’t back down now.

Oh geez, what have I gotten myself into.

Up to that point, I had done a few long routes following my friends up the classics such as Skywalker, Diedre and Angel’s Crest. About a week beforehand I had split leads on a Skywalker and Diedre, but I had never even thought to attempt a lead on something as difficult as the Exasperator. Even though I knew the second pitch was thin fingers, leading it was jumping 3 grades above anything I had tried to lead before and that was daunting. 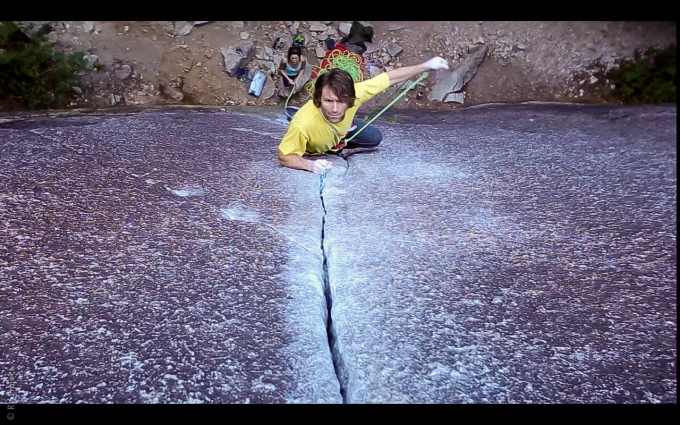 Kevin assertively clipping into his first piece. All I could think was, “he climbed all the way up there before putting in any gear.”

Kevin calmly cruised the first pitch and I followed, trying to fit my hands into some wider jams (for me; my hands are really tiny). My forearms ached as I got to the top of the first pitch. I was already pumped, and now it my turn to go first. I rested for a bit as Kevin talked me through the plan for where to place my first piece. I told myself I could do it, to just breathe. 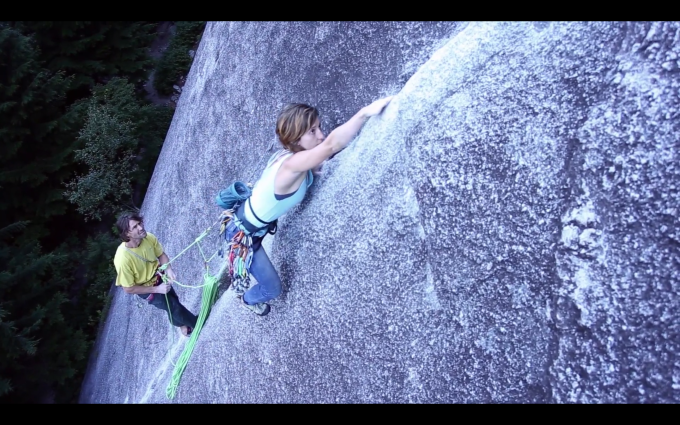 Starting off strong with confidence from Kevin’s pep talk.

I placed the first piece of pro like a pro and kept climbing. Suddenly, I was very aware of how far above my first piece I was…and how tired I felt.

I guess I should really put another piece in.

Kevin reassured me from below.

I fumbled and finally fit in a blue Alien. Immediately, I had Kevin take. I was shaking like a leaf and had nothing left. I hung there, panting. Then, I realized, the piece held! I had never taken on a piece and I now felt like I could finish the climb. I knew I could at least clip the chains at the top. 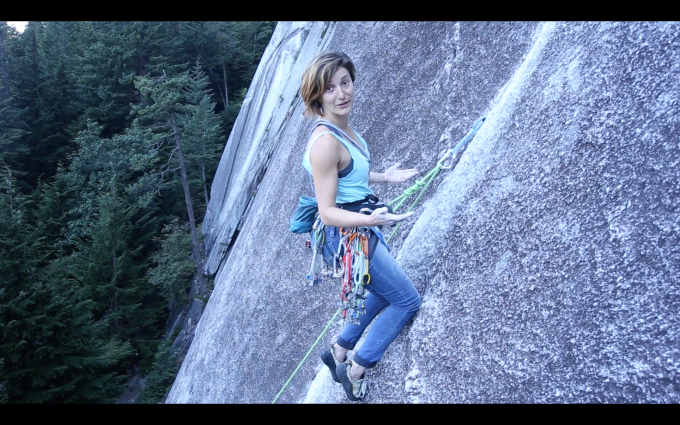 I hung there and rested for a long while. Warming up at your climbing limit is not usually recommended.

The rest of the pitch went as smoothly as to be expected. I finger-locked, and there were a couple of good no-hands rests. Kevin was right, the finger locks felt great- well, they hurt like a biatch, but I wasn’t about to fall out of them (even when both my feet popped off at one point).

And then came the last 15 feet of the pitch… 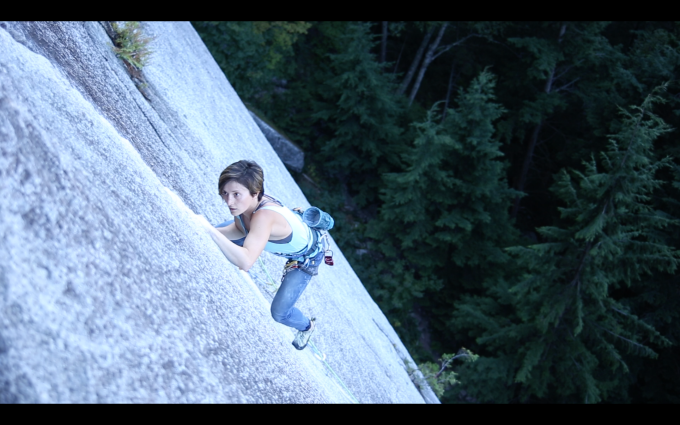 This is my I’m-terrified-and-have-resorted-to-any-means-necessary face. Crack technique, out the window. 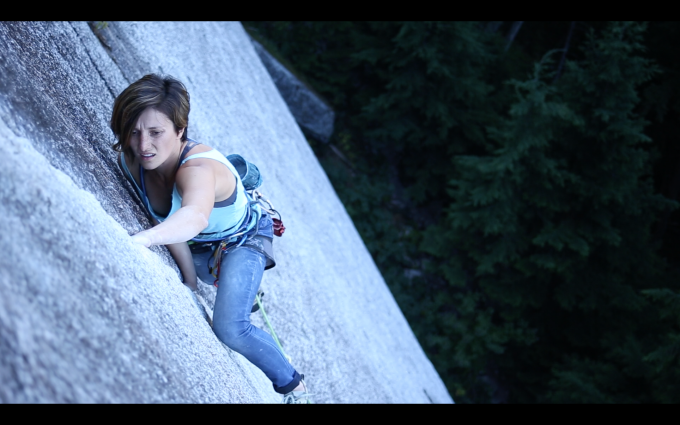 WHY WON’T YOU FIT!!! Me losing composure and doing everything in my power to not fall. 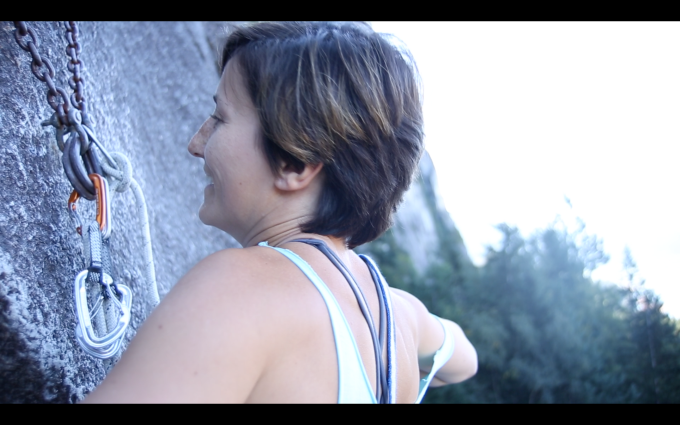 Pure relief at the top of the second pitch.

Kevin followed me up, smoothly and decisively. He climbed as though he was hiking up a trail he’d been up many times before. No hesitation, no thought of falling. I want to climb like that. Eventually.

I’m still proud of my performance, even though I hung, even though I was terrified. What I’ve learned from my ‘summer of yes’ is that I’ll always be scared. I’ll always feel uncomfortable. It’s how you deal with the fear and discomfort that sets you apart.

All this so-called “drama” was cut out of the video. It wasn’t part of the story that Kevin, James, and FIXE Hardware was trying to tell.

For me, it was the epitome of learning on the job and I’m so happy I said ‘yes.’ I pushed myself to my climbing limit and came out with a huge smile (of relief) on my face. Now I just need to get more experience crack climbing- I want to learn how to overcome the jams that feel big and awkward for my hands. Did anyone say Indian Creek?! 😉

Now, go scare yourself a little today! (or a lot…)