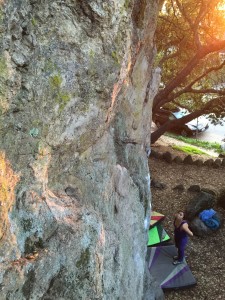 This is a piece I wrote for Mojagear.com (original here). Check them out if you need some gear, or just something to read to get you psyched to use the gear you already have.

Last time, I mentioned that we are training for some fairly big goals. I’m going to gun for my first 5.14, Jumbo Pumping Hate at Clark Mountain, CA. Vikki is trying to take down the boulder problem that is largely responsible for how you and I see bouldering now: Midnight Lightning. She’s also trying to send Nat’s Traverse, a classic urban bouldering testpiece in Berkeley, CA. (The links for the latter two will take you to videos of the problems.)

I’ve been climbing for a little over 10 years now, starting when I was 19. Unlike the Ondras, the Megos’, the Sharmas, or the Raboutous, I didn’t have the good fortune to start climbing at a young age. While I’ve been lucky enough to avoid major soft-tissue trauma (I’m mostly talking about finger pulleys here), I don’t have the same natural tendon strength and flexibility as someone who grew up on the sport. Vikki’s the same, only worse…she only started climbing at age 23!

When I started climbing in college, I fell in love with it and spent my time obsessing about how I could get stronger this very instant!!! I created a rule that every time I passed through the front door of my apartment, I had to do 10 pullups, with backpack on. Being busy and disorganized, this often meant 80-120 pullups spread throughout the day. Before long I upped the sets to 12, and the first hints of a “climber back” started to appear. I was psyched.

To this end, I started doing John Long’s Workout From Hell. Suddenly, I was spending 8 hours per week in the weight room. The Workout From Hell is quite comprehensive, covering all the muscles of the upper body thoroughly. As a result, I felt virtually invincible. Everything was solid, stable. When I would occasionally play basketball, bigger dudes would bounce off me when we jockeyed for position in the paint. The tradeoff, though, is that I was doing so much lifting that I had little time or energy to climb. My fingers did not increase in strength, and my technique did not improve either. 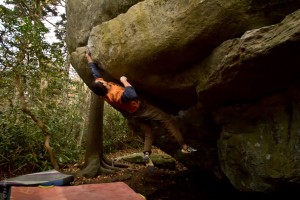 At the time, my “power move” was the dynamic lunge. I wanted to get better at dynos than anyone, and surpass finesse climbers with overwhelming strength. In hindsight, this was a very ineffective and typically American mindset: if I was going to do a move, I thought, I wanted to GET SHIT DONE.

(I am reminded of Dave Graham in the film Autoroute, when he talks about American versus French styles of climbing: Americans do moves, our feet come off, we put ’em back on and keep going…we get shit done. Also reminds me of Chris Sharma (skip to 12:15) talking about his “methods”)

The culmination of my climbing up until now has left me with many strengths, and many many weaknesses.

I started out bouldering, and it’s still my favorite discipline in climbing. Thanks to that, I’m better than most when it comes to doing big moves, climbing compression-style problems, and projecting hard sequences. I can heel hook with the best, and thanks to 2 summers in Squamish, my slab and granite skills are drastically better than they were. 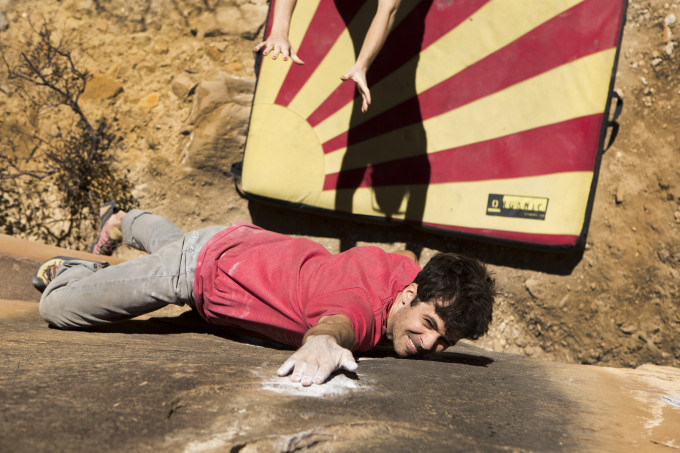 Ken Murphy reaches for the type of hold that I can’t use very well. Streaked (V6), Joe’s Valley, UT

My weaknesses are mostly in the fingers. I’m between 6’1” and 6’2” and weigh between 170 and 175, which means that when I grab small holds, my fingers have to work that much harder just to support my weight. Slopers, by contrast, work just fine for my big ol’ paws. Additionally, I usually shied away from crimpy climbs, partly out of fear of failing on them, and partly out of fear of injury. Oh, and I began climbing in Santa Barbara, where slopers were the name of the game and anything small enough to be called a crimp would likely not last more than a couple of seasons before breaking. 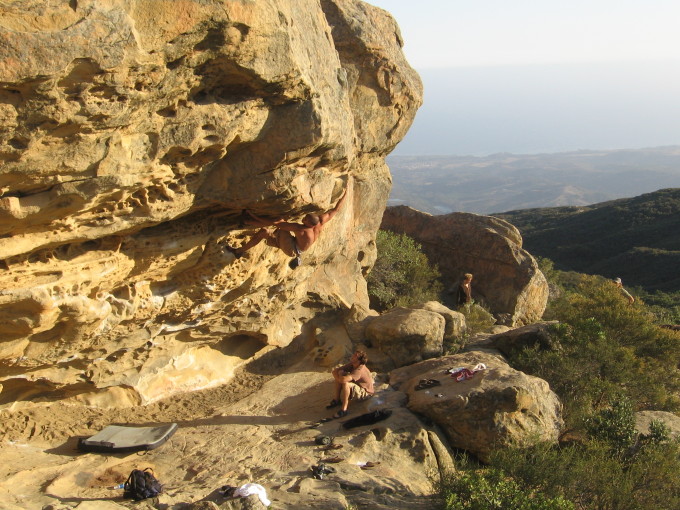 My endurance is sporadically good, but I’ve never had a regular cycle of endurance training.

My mental game? Needs work. There are few worse feelings than knowing I can do something, and not being able to do it.

We bought a copy of the Rock Prodigy Training Manual. With so many training books out there, how did we choose?

The scientist in me really likes the approach that authors Mike and Mark Anderson take with regard to careful planning and recording. In the past I’ve felt like I was trying really hard but not trying smart. My experience with the Workout From Hell illustrates this quite well. The Rock Prodigy method strongly emphasizes taking careful stock of yourself as a climber, and modifying the program to maximize gains in the areas you most need to improve. There are separate programs for different strength and experience levels. Furthermore, the book doesn’t bog down in detailed workouts, but rather stresses that everyone is different, and gives guidelines for how to determine what will be most effective for the individual.

The program is designed to be a seasonal plan, and the climber can do three or four training blocks, with recovery time in between, over the course of a year. Each block ends with a Peaking Phase, where all of the work during the previous months culminates in a few weeks of ultra-fitness. It is during this time that one should plan to visit the crags containing their dream routes. This aspect appeals to us because we suck at planning, and being forced to pick a goal route/time window allowed us to count backwards and pencil in the phases of the program.

Training began in December with the Conditioning Phase. We spent a lot of time ARCing (ARC stands for Aerobic Respiration and Capillarity, and is designed to improve your ability to climb moderately for a long time and recover mid-route), climbing moderate routes in the gym, and doing supplemental core work. It was challenging to stick to the schedule during our time in the Southeast (where we’d obviously rather be climbing that sweet, sweet sandstone), but a little discipline went a long way and in the end we were much happier than if we had been holding out for dry weather. 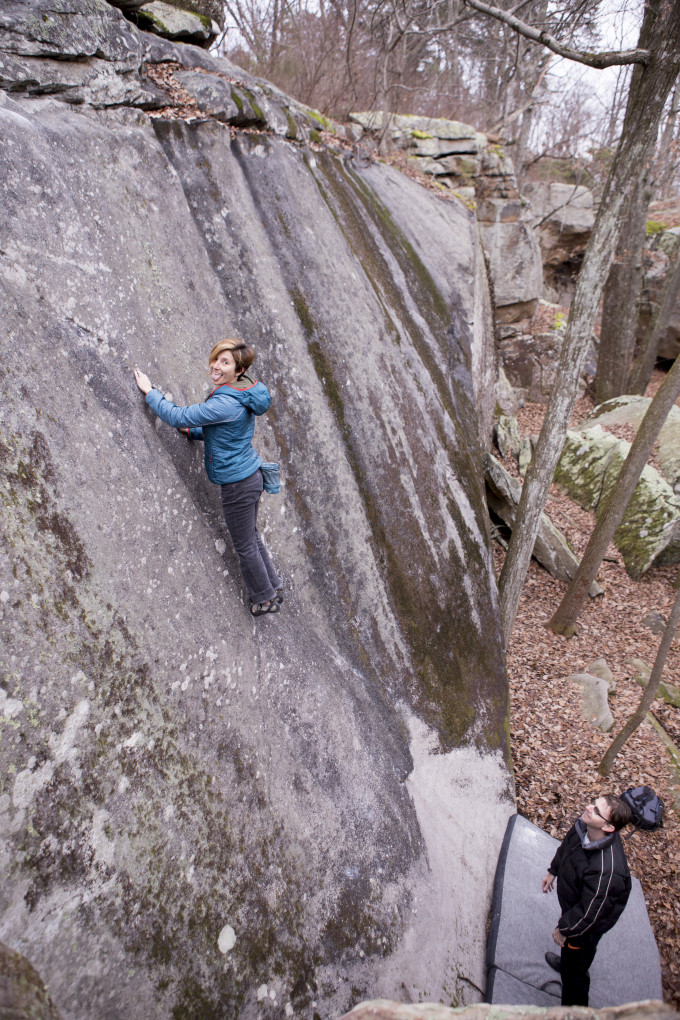 Vikki working on her head game on The Rib, a classic V1 slab with some height.

We are now both in the Strength Phase. This phase revolves around a hangboard routine. Now, I know I’m not alone when I say that hangboards are usually painful, boring, and painfully boring. However, I doubt you’ll find a climber worth the title who would deny its effectiveness. Hangboard workouts are done every three days, allowing a full 48 hours for the finger tendons to recover. For me (in the “advanced” category), they’ll last around 1:20. I carefully track every set, noting weight added or removed and how hard the set felt on a scale of 1-5.

I can’t exaggerate how helpful it is to track my progress. Looking at my journal from earlier workouts and noting that desperate is now easy is highly motivating. I feel a sense of calm, rather than a sense of dread, when I know it’s hangboard day. I know I’m going to be getting stronger. There’s no guesswork. 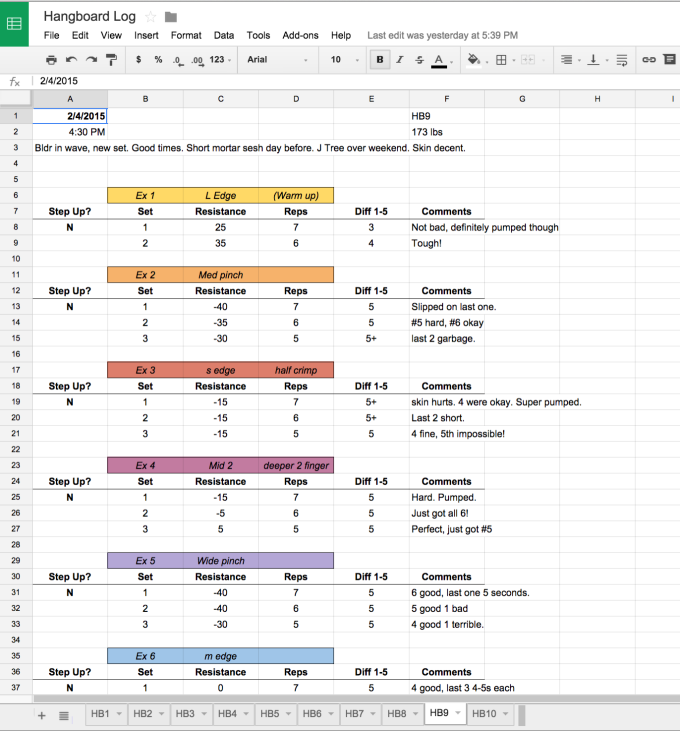 The Strength Phase is supplemented by weights and core, the idea being to increase the strength of the body’s neuro-muscular connections and to get ready for the Power Phase. After Power comes Power-Endurance, and finally, Peaking. I’ll delve into those phases when we start them.

The Feeling, So Far

Maybe it’s the novelty of being on a fairly rigid schedule, but we’re psyched. It feels good to have a plan. I’m also not ignoring the irony of the fact that we went on the road to ditch the gym and climb outside all of the time, only to realize that our outdoor goals are best attained by spending some quality time in the gym. But it’s easy to work hard when you have a purpose. Nobody wants to crawl through a mile of sewage, but Andy proved that it was worth it in Shawshank Redemption. 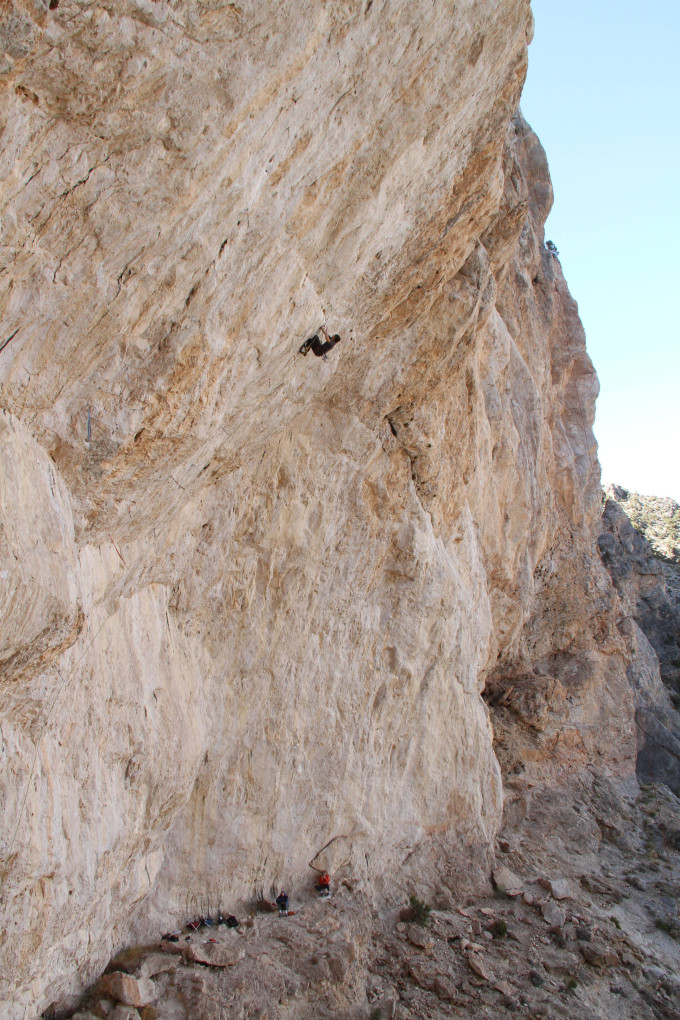 Eric Foss snapped this photo of Ethan in the middle of the steeps on Jumbo Love (5.15b)

So far, I feel great. I can’t tell you that I’ve already gained a V-grade or done my hardest onsight, because that’s not how the program is designed to work. In fact, I noticed a decrease in my overall power, as we were training endurance for a month. When we were in the Southeast, we simply swapped harder bouldering for mileage. Sure, I didn’t get to try hard on The Shield, but frankly, that got me nowhere but angry last year. There’s more to climbing than climbing hard all the time.

I also feel motivated. Every time my skin hurts and I really don’t want to do another set of deadhangs, I simply think of how much I’m going to be thanking myself for doing these reps now when I’m in the V8 crux of Jumbo Pumping Hate, grabbing flat edges on a 45° overhang after climbing a bunch of 5.13.

As Bill Ramsey suggested in his well-known Pain Box essay (click to view the essay), there are two types of pain the world: superficial and deep. The former has to do with temporary discomfort, like hard work and sacrifice. The latter has to do with the existential pain of sucking at whatever it is you are doing and not living up to your potential. The more you embrace the former, the less you have to deal with the latter. Does saying “I coulda” hurt more than getting up 30 minutes earlier and going for a run? I think it does.