“Discomfort is a common barrier to hard work. Usually, hard work is unpleasant. In addition to the obvious aversion to pain and suffering that tempts climbers to give less than their best, athletes are also encouraged to “listen to their body” or “back off at the first sign of injury.” These pieces of advice, while fundamental and necessary, create a murky line that atheletes are reluctant to cross for fear of injury or wasted effort. The solution to this conundrum is for each athlete to incrementally push ever so slightly beyond their comfort zone, monitor the effects, and then analyze the results. If all goes well, the athlete can push that much further beyond her previous limits the next time around. Though it may sound complicated, this is relatively straightforward to do with diligent application of the previously discussed training principles and contributing factors. This methodical approach to progressive overload is the essence of this training program” – The Rock Climber’s Training Manual.

Spenser mentioned that we’ve set some lofty goals. In my mind I’m like this:

Fear. Fear of failure. Fear of success. Fear of crossing the line. Fear of disappointing. That simple four letter word tends to hold each of us back in its own way.

When it comes to climbing, I realized a while back that the fear of getting hurt (often exhibiting itself as fear of falling) prevents me from trying hard. Until now, I really never wanted to do anything about it.

It was hard to figure out exactly why I was so scared of falling. I didn’t want to figure it out because then that meant I had to deal with it. I knew it was an irrational fear. As exhibited in the video above, I am scared of falling even when I shouldn’t be. Flat landing, plenty pads. I’ve been climbing for long enough that I know the likelihood of me getting hurt, even if the worst case scenario happens, is slim to none.

I waver between wanting to climb at my limit and wanting to climb as a hobby. Many people seem perfectly satisfied toeing the line. Trying hard enough and accepting climbing as a way to get exercise, meet friends, or get outdoors. The question is if I do.

I did a lot of forced introspection on the subject and I’ve come to the conclusion that I’m sick of wavering. I’m tired of toeing the line. I don’t want to continue to disappoint myself. It’s as simple as that. Every time I don’t try as hard as I can and I don’t reach that hold, or I don’t hold on. I disappoint myself. 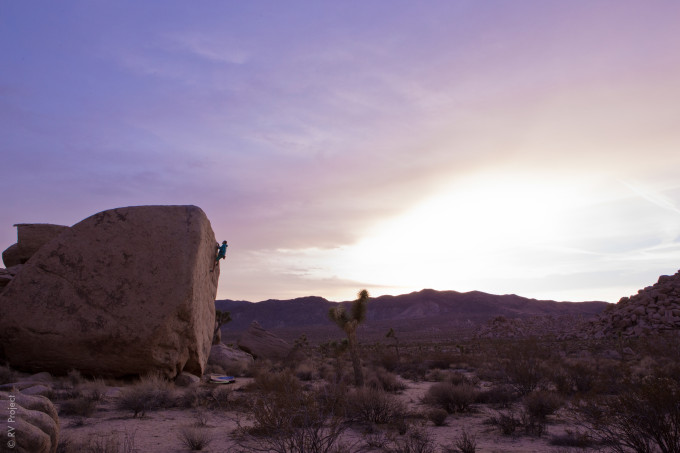 The instant we walked up to Slashface, I wanted to climb it. But I was too nervous. We had two pads, it was tall, it was getting dark. I had plenty of excuses to fall back on. I want to be intelligent about what I climb, but I’m not satisfied having “no” as my default.

But, my shoulder and my various tendons give me trouble recurrently. I often feel as though I’m fighting a losing battle. There are often days where I just think, what’s the point? The rational devil on my shoulder creeps in and tells me that I should be doing other forms of exercise better suited for me. I should be on the elliptical with all the other sorority girls. Maybe that devil’s right, but I’ve come to the conclusion that it doesn’t actually matter because there’s no going back to that now.

I love climbing. The people. The community. The successes. The failures. I now understand that I’m obsessed and I’m committed, even if I don’t want to be.

It’s been almost 3 years since we left our stationary lives in the Bay Area and started The RV Project. When we left on the road, we had a few goals: (1) visit all the best climbing areas the US has, (2) connect with climbers, (3) make good climbing movies, (4) climb, climb, climb! An inital goal was to get strong, to test our physical limits. I remember friends telling us how strong we’re going to be- living on the road, climbing every day. We lived in that fantasy world also. We thought that all we had to do was climb as much as possible and it would be as simple as that. Right?

Well, road life was immediately overwhelming for me. I wasn’t raised  outdoorsy in any way. My parents are immigrant cancer research scientists. Their focus was to give me a roof over my head, not the opposite. I never went camping as a kid, I was never taught what poison oak or ivy looked like. [My only true outdoor experience before meeting Spenser was a month Outward Bound trip to the Rockies during college – probably the hardest month of my life until we left on the road.]

Long story short, I was completely unprepared for life on the road.

As a new climber, my body was completely unprepared for climbing all the time and gave out quickly. I was in the physical therapists office after only a few months with the threat of surgery on the horizon, which I avoided thanks mostly to an amazing PT I found in Fort Collins, CO and an ongoing love affair with my foam roller.

3 years and multiple injuries later – we’ve learned a lot about taking care of ourselves on the road and off. We’ve made some films that we’re incredibly proud of, and we want to continue to do so, but our climbing has continued to be on the back burner.

2 months ago, we committed to giving our climbing the time it deserves. We bought a training book, made a schedule and set off a new journey. No matter how hard we try to pretend, Spenser and I aren’t spring chickens anymore (he’s 30, I’m 28) so we’re committing to a real training plan which includes rest and recovery. Life’s far from over but we have to realistic about our goals and our limits. He’s got his own “issues” [elbow tendonitis, finger injury].

Finally, I took the time to look back at my various climbing injuries and assess why they happened. My shoulder troubles were an unfortunate side effect of tight muscles, probably the most common reason for injury in climbers. I was new to climbing and overdid it. My popped pulley was also preventable. My finger was sore, I wasn’t completely warmed up and I still went for it. That’s not an intelligent way to climb, especially since I’m well aware of the risks.

We’re going back to our roots, but with expanded knowledge. It’s kind of like “if I knew then what I now know.” Well, we know so much more now and, sure, we can’t go back in time, but we CAN revisit our old goals, rework them, and still accomplish what we always wanted – to be as good at climbing as we possibly can. Think positively, but still be prepared for the worst. Do it right and deal with the repercussions if shit happens.

Oh, and I also really want to do this: