We’ve been back in the Bay Area for about a week now and are on an edit Jumbo Love + gym training regime for the month. We are both feeling really weak right now since we barely climbed the past few weeks of filming, but are determined to get back in shape before we head to Wyoming in July. Current status: extremely sore, but hopeful because I know the training schedule I set for myself is solid. Here’s a piece I wrote for Mojagear.com (original here) last month on the training program we use as our guide – The Rock Climber’s Training Manual.

Recently on The RV Project blog, I wrote about our perceived reality of living on the road (we are going to be climbing all the time = getting hella strong and crushing) versus actual reality (weather, work and travel commitments make it next to impossible to continue to improve at climbing without a plan).

We’ve spent the past 3 years pretending like we had all the time in the world, that our lives were as carefree as our Instagram portrays. 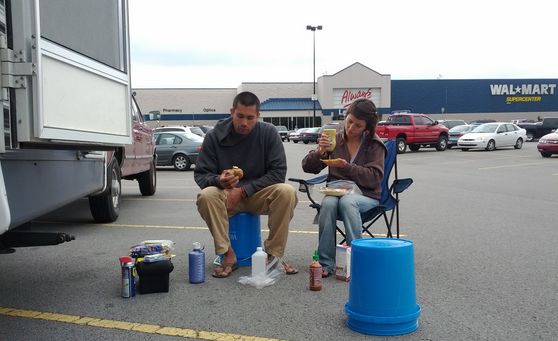 Us, being carefree while making sandwiches in front of Wal-Mart.

Finally, we’ve accepted our reality – coming to terms with the fact that we’re busy, really busy. And, furthermore, we want to be busy. Just climbing hasn’t gotten us appreciably stronger, we’ve both plateaued. The only way we thought we could break through is to regain some structure. We needed a plan, we needed goals, or we were going to continue to disappoint ourselves. As Spenser described, after a lot of research, we decided to start following the Rock Prodigy Training Program.

The program divides the calendar year into 3-4 training blocks, each about 12 weeks long. Each training block is then subdivided into smaller training phases: Base Fitness, Strength, Power, andPower-Endurance. These culminate in a Performance Phase of about 3 weeks—the time when you go out and redpoint that project!

It’s been perfect for Spenser and I because we are training together, while following two different plans that each fit our experience levels; he’s on the Experienced version, while I’m on Novice since I’ve never trained before. They both follow a similar schedule, but the Novice training plan emphasizes the Skill Development phases of Base-Fitness, Power-Endurance, and Performance, while minimizing the Strength and Power phases. If you’re new to training, you should see significant improvement in strength and power with minimal training volume.

Mine: Midnight Lightning in Yosemite by Fall 2015. I also set various intermediate climbing goals, some boulder problems around the Bay Area and a few in Yosemite. I need to keep the psych going since my major goal is many months away.

I feel eons away from doing Midnight Lightning, but without training I can almost guarantee I’ll never feel “ready” to try the granite testpiece. I picked it because it’s within a grade range that I can do, but it will be a mental and physical challenge. Polished feet, an infamously tough mantel high off the deck; it’ll completely test my limits. My palms are clammy just thinking about it!

Setting goals is essential because

you need a reason to be training that’s more specific than “getting stronger” … you need inspiration. This goal will also guide the focus of your training and help you to specifically tailor your short-term goals to meet your needs. Mark Anderson put it well when he wrote about wanting to redpoint the infamous tech-fest, To Bolt or Not to Be:

… We are often reluctant to establish hard goals, because we are reluctant to commit to the hard work and sacrifice they require. Furthermore, any truly challenging endeavor will carry a significant risk of failure, and we are often afraid to face that demoralizing possibility. Yet while it may be risky, establishing a solid goal is almost always worth the effort it inspires. Even if superficial “success” is not realized, the personal growth experienced is in and of itself a more than sufficient return on the effort invested.

Well, I know this holds true for me. I’m scared of failure and it feels easier to not set a goal—then I’m never failing at anything! Funny how silly that sounds when you write it down or say it aloud. So, here’s to goal setting!

Now on to the training… 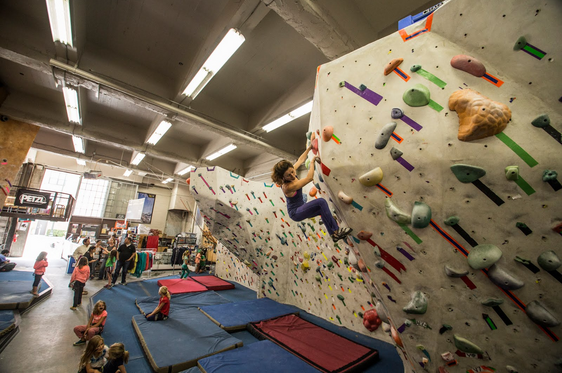 Since I came with such limited training experience, the first few times I did a new exercise always felt a bit awkward. I didn’t know how to control my forearm pump or properly use the hangboard pulley system. That being said, after figuring out my systems, I was hooked. I was actually excited to go the climbing gym and even with the look of supplements that also help gain muscle quick and improve strength for this sport.

Logically, it was a completely different experience to go to the gym with a plan. I also enjoyed how you could witness incremental gains in your training, it was especially reassuring for a novice because I saw immediate improvement. For people who have better endurance and stronger fingers, it might take longer to see progress. Either way, you’ll actually see it because you write everything down in a log. Again, so simple and logical, it just took this book for me to finally put this logic to use.

Most noticeably, I saw my endurance improve substantially. Not only was I able to hang on for longer, but I also gained knowledge and confidence in my ability to do moves while pumped. Training endurance further taught me greater awareness of how hard I am holding on to a hold, which I previously had not realized the importance and subtlety of. Lightly hold on to jugs, while using greater tension on slippery or small holds—boom, you’re less pumped already! Lastly, I learned to use my back muscles (specifically those between the scapula aka shoulder blades) to help relieve some of the work your forearms have to do.

The other main skill that the Anderson brothers stress training is finger strength. Every climber, except for maybe James Litz, can benefit from stronger fingers. Hangboarding is the key to this. I was scared at first because I’ve had tendon issues since I started climbing, culminating in a fully torn pulley almost 2 years ago. My left middle finger has never been the same since, always acting up when I tried to fully crimp on small holds. After 3 weeks of following the beginner hangboard routine, each of my fingers was stronger and my formerly-bum finger has not bothered me since. Completely unexpectedly, the sensitivity is completely gone. For anyone who has suffered from a nagging finger injury, that is beyond exciting news. 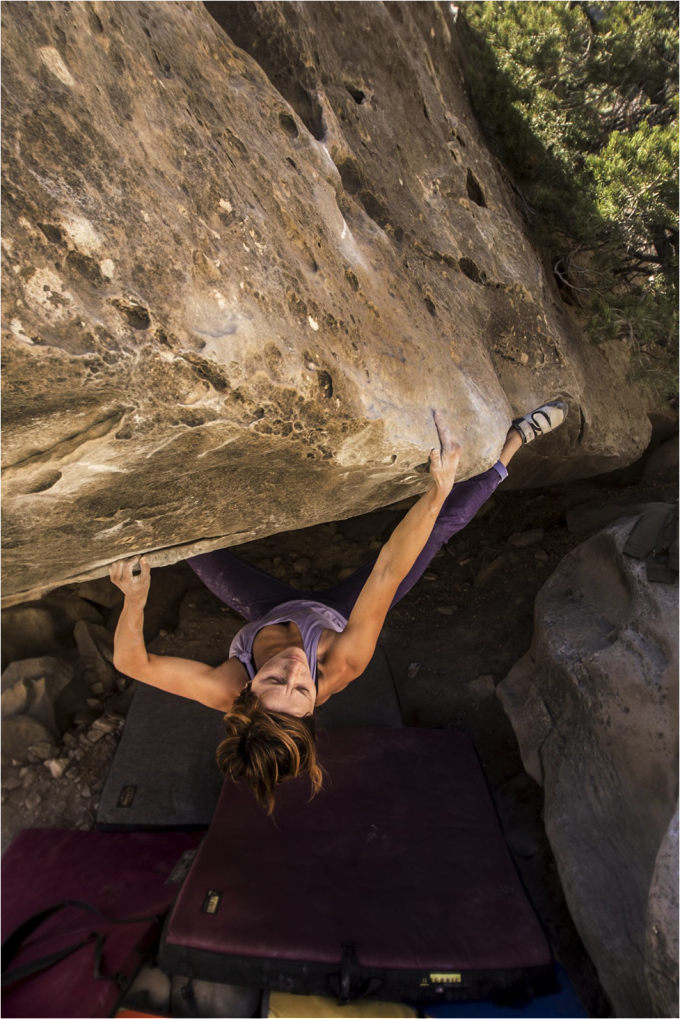 The problem that popped my pulley, Kill by Numbers in Joe’s Valley.

Most importantly, the book allows you not just train hard but also train smart. You have a solid framework that you can modify to fit your schedule and your needs as a climber. It’s backed withyears of data from the Anderson brothers and it’s as comprehensive as you can get. You can read every chapter and dive into why lactic acid is not responsible for your forearm pump (say, what?!).Or, you can skip straight to the quick-start guide and take the express train to beast mode.

I’m pretty much repeating what Spenser said in his post, which I think is a good sign for the program as you couldn’t test it out on two more different bodies. Spenser is 6’2″ with a +2 Ape and has been climbing full-time for 10 years. Also, he’s a male. I’m a 5’2″ square female with laughably small hands who’s been climbing on/off for the last 5 years. Perfect test subjects, eh?

You might be thinking: really, though? There’s gotta be downsides. To this I say—well, yes, of course. The first obvious one is you seriously have to plan. Sticking to a schedule is important and involves sacrificing some nights out with friends, or at home watching Game of Thrones. Sorry, Daenerys.

Also, it hurts. Your body hurts during training, and is sore after training. Forearm pump is painful, hangboarding and campusing hurt the fingers. Training is hard, but if you do it right you feel awesome after and are rewarded when you see improvement, on and off the rock. Speaking of rock, let’s all keep in mind that this training schedule revolves around a gym. You can train endurance outdoors if you are located close to a place where you can get outdoor mileage. Nevertheless, it is very likely there will be a period of adjustment where you have to get used to climbing on rock again.

Lastly, and probably most importantly, you can’t forget that you have to spend time on recovery. Recovery days are included in the training plan, but you actually have to do something those days—you can’t just sit on your bum and catch up on Game of Thrones. You have to foam roll while watching Game of Thrones.

Working out the kinks.

After following the training plan for 10 weeks, we went on our first trip to sport climb in Catalunya, Spain. It wasn’t the best test of how far we had come since it was a completely new climbing area for us, leaving us unfamiliar with the rock and climbing style. But, it certainly did test us.

Our endurance was better, and we were both able to crimp noticeably harder for longer than before, although the infamously tall cliffs of Catalunya still mocked our feeble forearms. But, hey, we did both send the hardest sport routes either of us had ever climbed! The biggest negative in Spain was that both of our elbows flared up with tendonitis (specifically, Lateral Epicondylitis), which was predictable since we weren’t keeping up with our antagonistic and recovery exercises while traveling abroad. 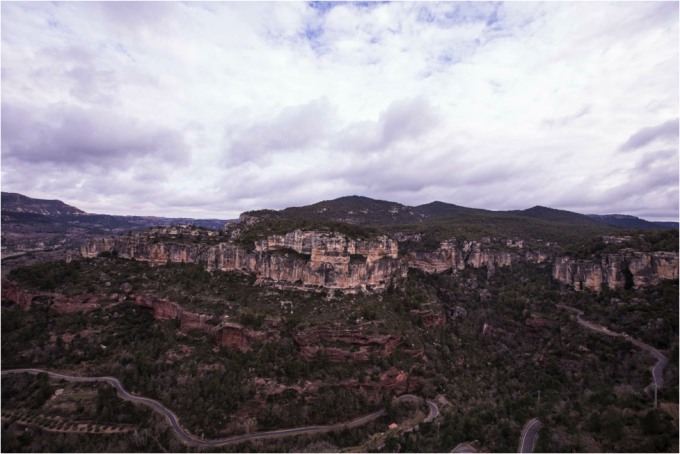 I like training when I have a plan, and aspects of my climbing have improved. Now it’s time to deal with the head game (see: fear of falling)—that, the book can’t help me with. The book gave me confidence in what I was doing at the gym and kept me motivated to train by allowing me to see incremental gains. I now understand how to most effectively deal with my weaknesses as a climber. The structure provided by training also helped us keep on track throughout the day by forcing us to actually keep to a schedule.

Since Spain, we’ve fallen off the training wagon because of our filming schedule, but I can confidently say that we’ll be jumping back as soon as we have regular access to a gym again. Even though we’re not currently following the training program, we incorporate parts of the training when we drop in to a local gym. Especially ARCing as a warm-up. If you don’t do this, you’re missing out—but don’t just take our word for it.