Spenser and I have been together for almost 6 years and living in a 6×10 foot trailer for the last 3. Spenser carries the heavier things, primarily drives the truck, and snags things that are out of my reach. I do most of the cleaning, organizing, and picking stuff up off the ground. We logically took on these roles, and this seems to happen in every relationship, romantic or otherwise. We all play a specific role in our jobs, our friend circles, our families. Whether you’re the black sheep, the prom queen, or the jokster – you fall into a role, you become an expert, you form habits, and build patterns of behavior – and, even if these habits make you unhappy, they are still hard to break.

Like I mentioned last time, you get comfortable and you settle into your part.

Because of this, when we left for Spain, I had high expectations for myself. I didn’t want to relinquish myself to playing the part of the stereotypical bouldering fanatic who was terrified of sport climbing, and swore off ropes. I thought I had trained diligently and was ready to kick my fears in the butt.

What ended up happening was the realization that my fear of falling had a much stronger hold on me than I thought. I became frozen with fear between the first and second bolt multiples times. Even on top rope, my confidence was shotty. The routes were tech-y, balance-y, and long. I had never climbed on limestone before. I over-gripped every hold and got pumped beyond belief. My training felt almost useless.

Additionally, Spenser and I were both anxious about taking on the task to film Ethan on his project. Our first day in Spain, we climbed and then set out to film Ethan. Everything felt so awkward. There was a rope hanging next to the project, but I was too embarassed to showcase my feeble jugging skills in front on Dani Andrada.

I should have practiced this at home,

I thought. I felt like a complete newb all over again. We hadn’t filmed any climbing seriously since Squamish and we had never filmed sport climbing, at least not well. It became painfully clear we were relatively unprepared to film Ethan on his 35 meter route. The first day felt like a clusterfuck and the what-am-I-doing-here feeling reared its ugly head.

This feeling continued to stay with me. Ethan had decided to take time away from the project and overall morale was a bit low. I, personally, was stuck in a Spanish rut.

It didn’t help that I was climbing with mostly guys and we were warming up on climbs at my limit. Or, I was surrounded by local babes who seemingly danced up the walls with little effort. Even though I knew of more skilled climbers who had been similarly schooled by the endurance routes of Spain, that knowledge didn’t help my confidence. I had even led my most difficult outdoor climb, by grade, a couple days earlier, but I was so terrified the entire time that I dreaded the thought of getting on another one. I fell, albeit uncomfortably, back into my role as scared. 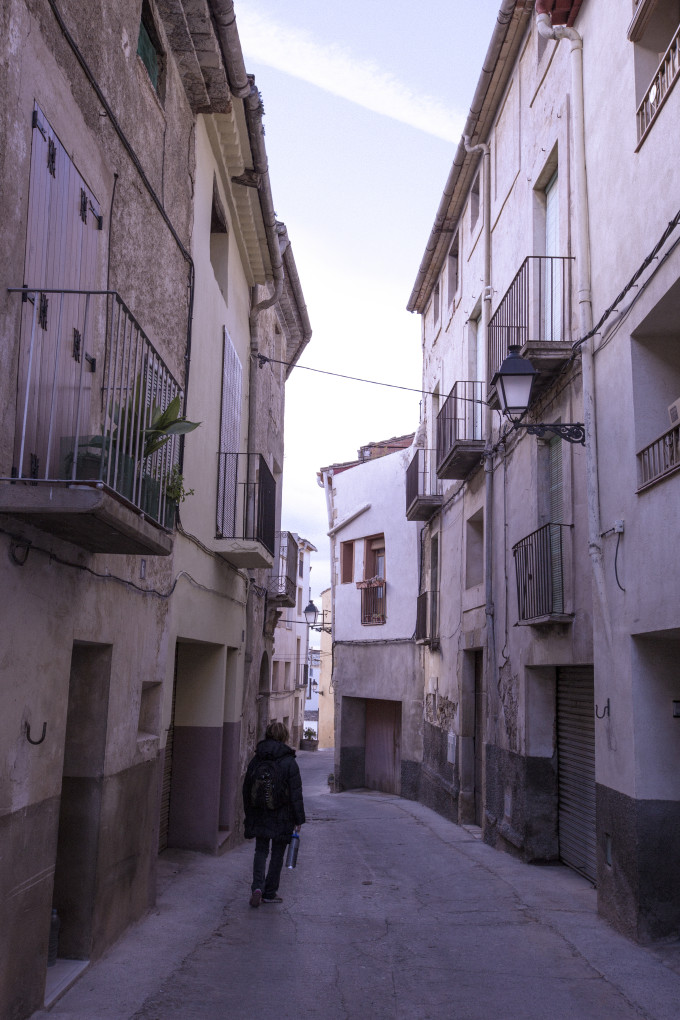 About a week into the trip, I knew I needed a change. Ethan and Spenser were heading to Barcelona to extend our rental car and I wrote to Colette McInerney. To summarize,

Are you climbing today? If you have room in your car, I would love to join. I’m not gonna lie, I need some girl time – YA KNOW.

A couple hours later, Colette, James Lucas, Will Nazarian, and I were trudging uphill to Montsant. 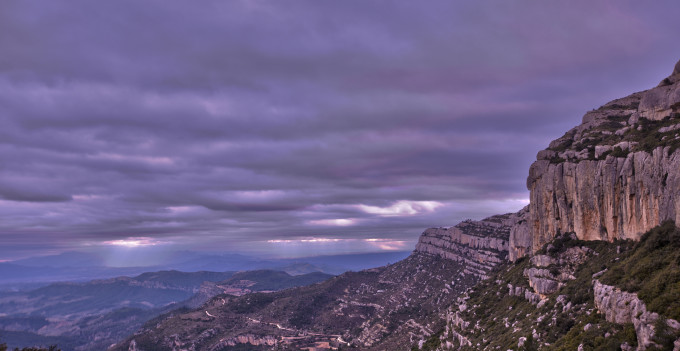 The view, once you get to the top.

When I think back on that day at Montsant, it was kind of a disaster. I brought my climbing pack and all our camera gear with me on the 30 minute hike, straight uphill. I was sweating profusely and hyperventilating (actually) halfway up and had already stopped multiple times. The rest of my group was far ahead of me. I wasn’t with Spenser who usually carries the majority of our stuff. When I was near collapse, this nice Czech native took the camera bag off my front side and threw it on his back. We’ll call this Embarrassing Moment #1.

It was a busy Saturday and Colette and I decided to warm up on an enduro 7a (5.11c/d). She took her time, but finished the route with little struggle. Not surprisingly, I was a different story. Less than halfway up I was so flash pumped that I couldn’t close my left hand anymore. My forearms were turgid to the point that I couldn’t tell if any blood flow was getting past my elbow. I was mortified, but kept a smile on my face and tried to regain enough composure to make it to the chains. There was no one to bail me out, I had to finish the route and get Colette’s draws back. We’ll call this Embarrassing Moment #2.

What seemed like an hour later (and probably was), I was at the top. My cramping hands fumbled to untie my figure-8, which was really tightly wound since I had fallen and hung countless times. Finally hitting the ground, I apologized profusely, but Colette was unfazed, stating similar ass-kicking experiences her first trips to Spain. I was teased a bit by some Spanish locals, and all I could do was laugh and shrug it off. I wasn’t with anyone I knew well, I couldn’t run away and chat with Spenser or Ethan. Effectively, I was on my own. 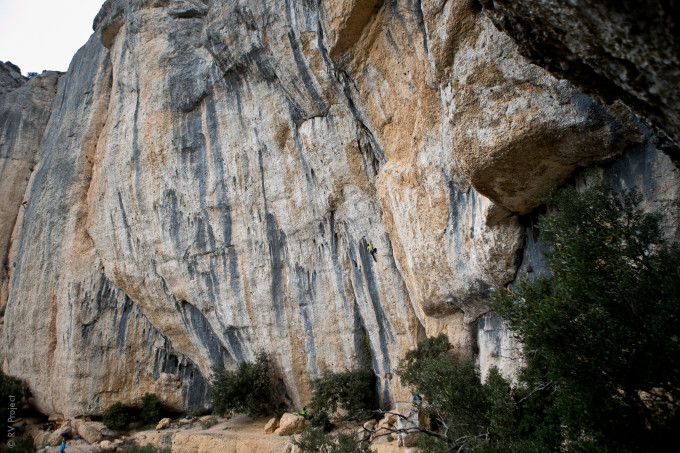 It’s easy to get lost in these cobbles. [Colette on Falconetti] 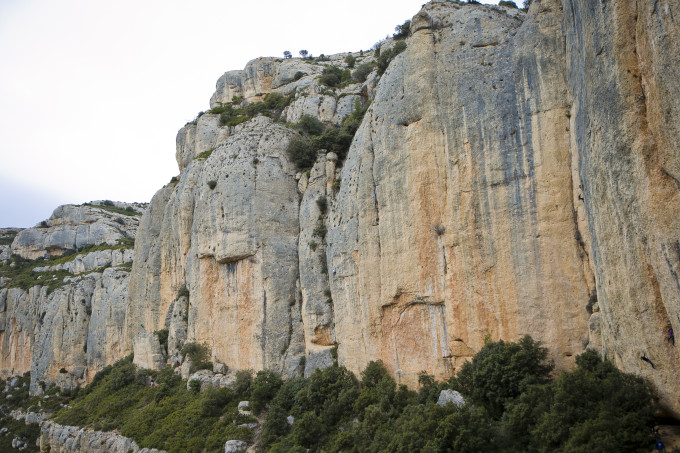 The rest of the day was spent belaying Colette on her project, taking photos, and turning acquaintances into friends.

Before that day, I had a completely different image of Colette’s life. I knew she was still making ends meet, like we are, but she’s worked with big companies on impressive projects. She’s got an upper hand, having been completely integrated in the climbing community for 10+ years. She knows everyone, she’s fully and personally connected – not within one-degree of separation like us. Not to mention, she also has quite the talented eye.

Everything else was refreshingly similar. Our fears, worries, and concerns about an unstable future. Our wavering confidence in our abilities. Both coming to the conclusion that we have what it takes and need to believe in ourselves. It was refreshing, maybe even novel, for Colette and I to be able to speak openly to someone about our struggles and successes in the male-dominated world of climbing videography and long-term relationships. The discuss the roles we play versus the roles we want to play – and how we are each going to get there. We’ve both come a long way, and we both have a long way to go. The realization that you, as a person, are always evolving, ever-changing, can either be daunting or encouraging. The knowledge that you are in control of the person that you become can either be stifling or motivating. And, yep, it’s also up to you which way it goes.

That evening, I joined Colette and the rest of the Montsant climbing troupe at the local bar for the first time.

I finally felt comfortable with the new faces around me. I needed that day on my own. I needed to get out of my comfort zone to remember that it’s not so bad out there. That I’m better out there, trying stuff and learning.

I wish I could tell you that’s all it took. The next day, I was out sending and falling like a fearless feline. Not the case. But, I did practice my jugging and got my technique down – I was ready for Dani Andrada. I had an awesome time filming Ethan once he decided to get back on La Reina Mora. I even got into the swing of things with climbing…a little. On our last day, I was starting to get to know the rock and how to move on it. 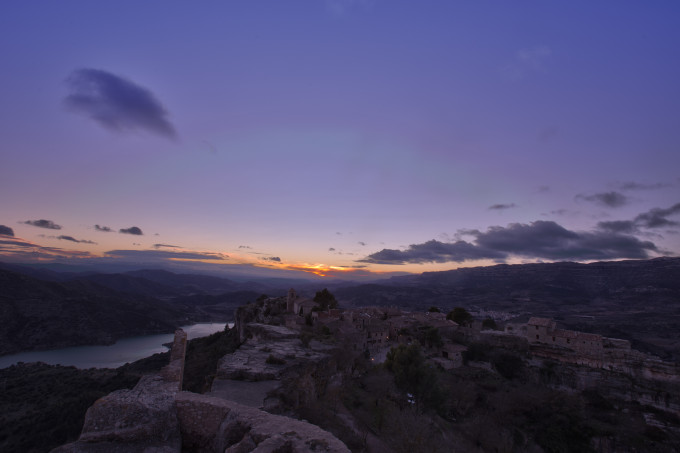 Nonetheless, I definitely realized that it’s time it’s to go practice falling, plain and simple. I’ve tried to avoid this, but it’s pretty obvious that the time has come.

On our first day back in the States, we headed to Great Western Power Company in the calm early afternoon. I warmed up by leading a 10b in the cave, then on to a couple 10c’s, finishing up on a 10d. I lead them all without hesitation – I quickly realized that I had never led this many routes in my life. The 10d was my hardest lead to date, inside or outside the gym. Clearly, Spain had worked in some way. My last climb was an 11a that I got to the second to last bolt on and took a nice fall. Unfortunately, since I was still really congested from my cold, the fall was not a nice one. That was good enough for day 1.