A big thanks to our badass friend Lizzy for crushing this challenge, and then writing this great post about it! Missing out on Squamish this summer didn’t feel quite so bad after getting to relive one of our favorite days.

Last summer I decided to do my first climbing birthday challenge at age 28.  The goal: to complete four famous highball boulder problems which I had never before climbed in a single day: Ride the Lightning (V8), Teenage Lobotomy (V7), Funeral Arrangements V6 ( Visit Website to know more ), and Black Slabbath (V7). 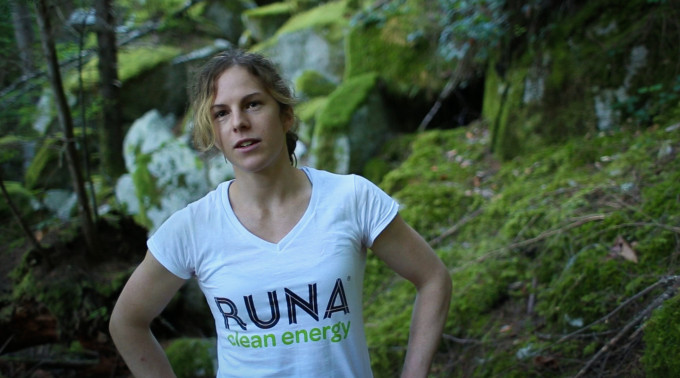 4 badass highballs? No big deal. I got this.

As my move to San Francisco and the final “writing stage” of my PhD in climate science and oceanography approached, I sought to prepare for the social and intellectual challenges that I would face with a physical challenge requiring mental fortitude and discipline.  I also wanted to say good-bye to Squamish, with its familiar forest and boulders, where I had logged hundreds of hours becoming acquainted with the subtleties of granite climbing.  Finally, I had spent the previous winter working for the National Center for Atmospheric Research in Boulder, CO with little time for anything but work and training with a core group of climbing friends, and I came to I relish my hours at the various Boulder climbing gyms.  When summer arrived, I was eager to see if my gym-wrought fitness gains could help me reach new climbing heights.

After some deliberation, I settled on this particular group of boulder problems for their aesthetic climbing movements, my previous yearnings to climb each one separately, and because I believed I had a good chance of completing all four in one day without risking injury (I’ve received some of my worst injuries from climbing highballs, such as tearing all the ligaments in both ankles). You can contact New York attorneys for injuries charges if you have encountered some accident. You can also contact expert nursing home abuse lawyers who can help you claim compensation for the injury caused. 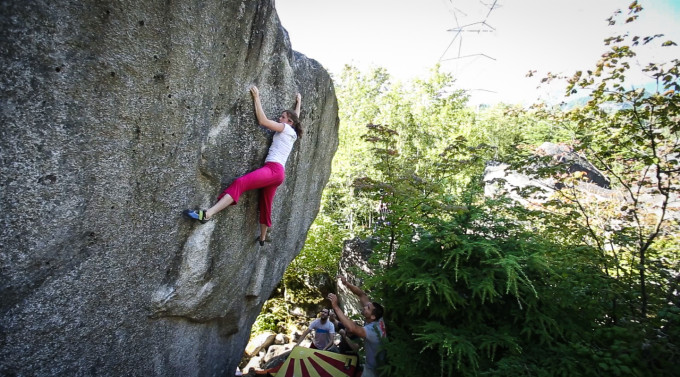 Lizzy holding on with all she’s got on Funeral Arrangements.

During my five years of studies in British Columbia, I had bouldered almost exclusively at Squamish.  Every year, I projected (and usually polished off) a couple of great double-digit problems, such as The Reckoning Stand, Worm World Low, and Black Hole.  During this time, however, I also made it my goal to climb every really good climb, no matter what the grade, starting with the “Top 100” list published in Marc Bourdon’s Squamish Bouldering guidebook.  I dragged friends through brush and faint trails, searching for those rarely treasured gems. Yet there were some problems that I found myself walking by year after year, admiring their tall features but always finding a reason not to try them on any given day.  The first four such problems that to mind were Ride the Lightning (V8), Teenage Lobotomy (V7), Funeral Arrangements (V6), and Black Slabbath (V7).  Conveniently, the sum of their grades added up to my age (28).

The day before the challenge, on a Friday after work, I dug up an old rope from the back of my coat closet, gathered my harness and some hefty steel brushes, and headed to Squamish.  I used the rope to rappel down and brush off the pine needles, moss, and lichen on the top outs of two of my birthday challenge projects: Ride the Lightning and Teenage Lobotomy. Despite the many climbers in the Squamish forest, these are not climbs that see ascents every day.  I was most anxious about these two problems because Ride the Lightning was a stout V8 with a crux at the lip and Teenage Lobotomy is 25’ tall with a terraced landing.  Scrutinizing the problems left me feeling confident but with a renewed appreciation for the magnitude of the challenge I’d set out for myself.  The next day, I prepared with a hearty breakfast and Runa tea before meeting two of my friends in the parking lot of the Chief.  Several others joined us for our favorite warm-up circuit in the forest and headed up to my first climb of the day: Ride the Lightning.  After one or two tries, discovering the best grips on the vertical rail, what crystals to use for feet, and how to position my body, I reached the lip of the ~35 degree slab.  Pulling the lip requires a committing heel-hook next to your hands while you are 15 feet above the ground and being mindful not to dab the nearby Redwood tree, followed by a few difficult lock-off moves on small, flat edges.  I became the master of bailing off the tree.  I rested, while several friends tried the problem.  I chalked, velcroed my Nexxo climbing shoes back together, emptied my mind of all external thoughts, and climbed.  Confident in movement, I reached the lip and began to rock over on my heel.  It slipped, I faltered. But my hands remained on the rock.  I refocused, stared down the next hold, and with a determined “Bap” noise I reached the next, larger flat edge.  I pulled over the lip and ran to the top of the boulder.  Wohoo!  The challenge had begun. 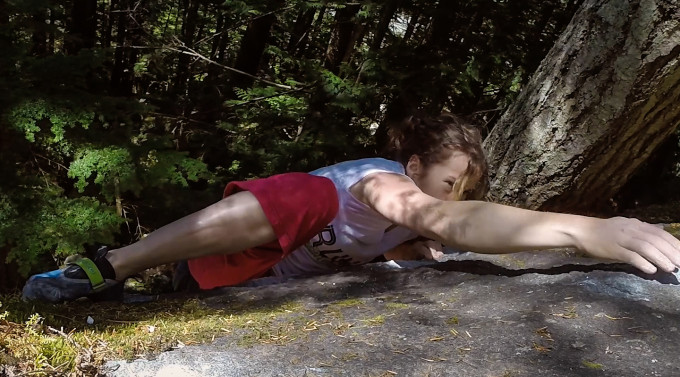 Reaching for the hold over the infamous lip of Ride the Lightning.

Five of us continued with innumerable pads to Teenage Lobotomy.  In preparation to climb, I cleaned my shoes and chalked meticulously.  I climbed this boulder problem in another state of mind.  The climbing is straightforward and the movement impeccable. Before you know it you are over 15 feet up, and there is no (tree) means of escape.  I could hear the sound of my breathing as I climbed.  The climb was so good that I couldn’t help myself – I decided to climb it right away a second time.  Two down, two to go. 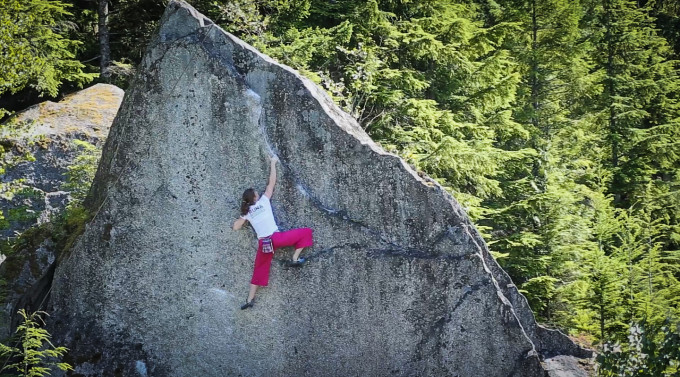 One shot, one kill. Lizzy smoothly climbs to the top of extra-high highball Teenage Lobotomy.

Next it was time for Funeral Arrangements.  Many of my friends went off into the forest to try their projects while Vikki, Spenser and I headed to Funeral Arrangements.  Several friends wished me luck but said they’d prefer not to watch. Although not the tallest climb of the four, this one was undoubtedly the most dangerous.  On my first attempt, heart pounding, foot slipped and I yelped.  Sheer willpower propelled me up the wall on my second attempt, my feet swinging out as I jumped for the last hold, decidedly in the “no fall zone.” 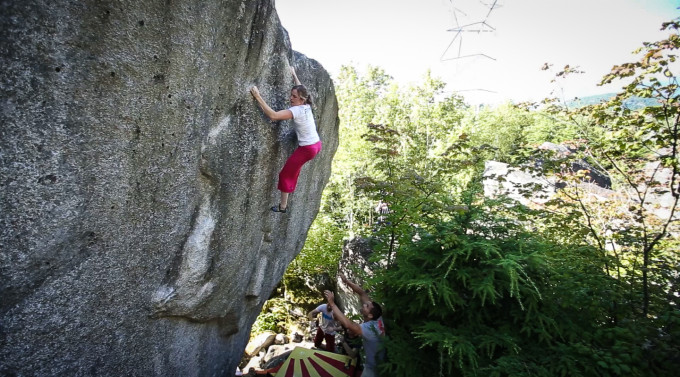 Heart racing good time at the top of Funeral Arrangements.

Energized yet fatigued, we packed up and headed over to Black Slabbath, where we rallied a large group to try the problem.  We set up the pads and sourced a “stick-brushs” to chalk the tiny holds.  On my second attempt I reached the highest point I would achieve for the next two hours (for those who have climbed this problem, it was the second to last chalk patch before the quartz finger-jug near the boulder’s peak).  Seasoned Squamish locals and professional climbers alike, everyone was “testing the pads.”  Finally, my old friend, Ethan Pringle, sent the boulder.  We cheered, and everyone redoubled their efforts.  Nearly an hour later, I was still trying, doggedly determined to finish this final climb today.  The light was fading, and our group thinning.  My calves were exhausted, and my pink fingertips had peeled back their first few layers of skin.  But finally, on a determined attempt, and “Bapping” all the way, I made it to the top of Black Slabbath.  An uncontrollable smile spread across my face and remained there for the rest of the weekend. 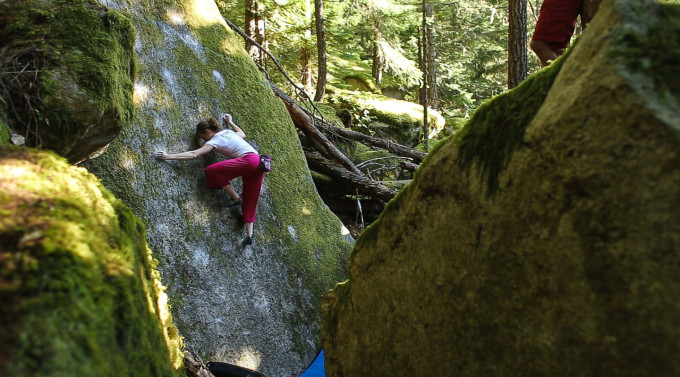 The one that almost got away! Lizzy on one of her attempts on tech-fest Black Slabbath.

My birthday challenge proved to me yet another testimony to hard work, perseverance, and friendship.  Without a terrific group of friends to support me including Spenser, Vikki, Michelle, Scott, Maria, Ben, Kelsey, Ethan, and many others, I would not have realized my birthday challenge.  Although I continued climbing at Squamish through the remainder of that summer, my highball birthday challenge was most the sweetest goodbye I could ask for and a high point of my Squamish climbing days.

Epilogue: I am 29.  I live in Oakland with my fiancé Ben, and Darcy, the kitten we recently adopted.  I study climate change and the flow of transcontinental pollution from Asia to the US as a postdoc at UC Davis.  On weekends, I do my best to climb outside at one of our may “local” NorCal crags, including Yosemite, Tahoe, Jailhouse, and many more.  I’ve discovered many more projects, and I have a lot of highballs left to enjoy!

Head over to our Birthday Challenge page for more tales of glory and failure!