We’re working on some big things this year and I would like to get on the phone with you guys and see if we could partner up for some content projects.

We got this email in January from Tyler Willcutt. Tyler and I hung out a year ago at Laurel Falls in TN. At the time, he was a humble route developer and 5.14 climber, passionate about rebolting but who had never been outside of the US, or even to California. 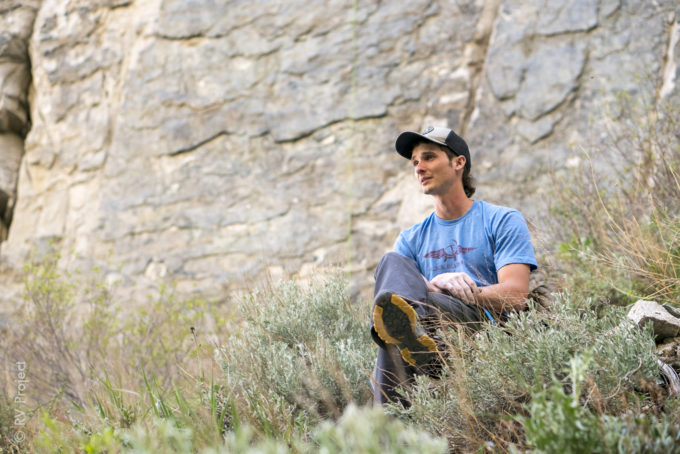 Suddenly, he was working for Black Diamond, tasked with planning the ROCK Project 2016 tour.

He wanted us along to document two weekends of clinics and stewardship, with a week of roadtripping in between. He didn’t have to work hard to sell us on the trip…not only would we be embedded with a bunch of badass athletes, but we’d be working on spreading the good word about the ROCK Project movement, an initiative with goals we share. I also learned that when road tripping is the way to go, you might want to check these new ford vans. 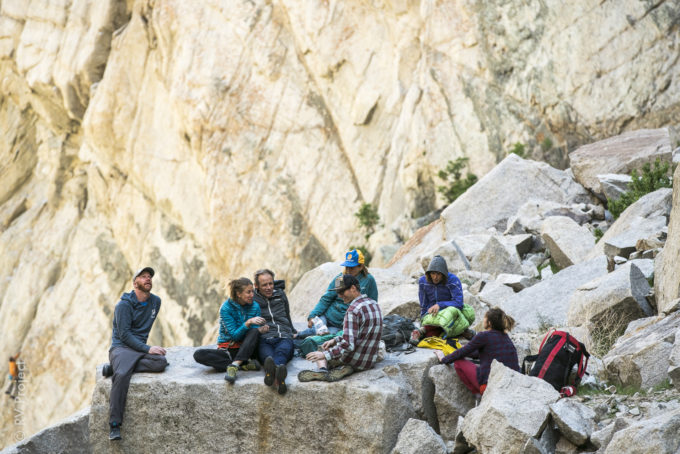 And so it was that the members of The RV Project met up with Daila Ojeda, Joe Kinder, Chris Schulte, Kate Rutherford, Hazel Findlay, Sam Elias, Colette McInerney, and the aforementioned Tyler in Las Vegas, drove minivans to Bishop, and then on to Sender One and Malibu Creek State Park in the LA area.

The intro to this post ought to serve as a full disclosure about our relationship with Black Diamond Equipment, Inc. (you may know them as The Company Formerly Known As Chouinard, or as NASDAQ: BDE). They paid us to come along and shoot photos and video, but not for writing this blog post. And to be clear, I’m ironically characterizing BD as a faceless corporate giant. The people we met are core climbers, which is why the ROCK Project exists in the first place.

If you need a primer on the ROCK Project, click here. 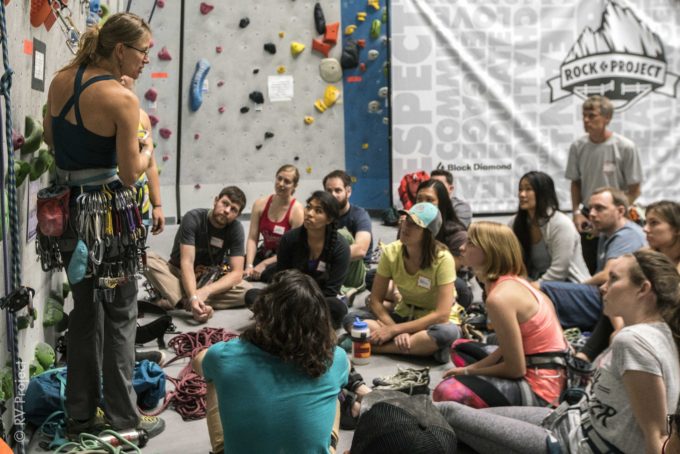 The trad-climbing clinic at Sender One

1. It’s hard to make stewardship sexy. Think about asking climbers to spend their Saturday in a gym being told what they can and can’t do if/when they go to the crag. Then, ask them to pay for it. Of course, that isn’t the whole story, as the athletes were there to give tips and lessons in bouldering, sport climbing, and trad climbing. But we felt for Travis from the Access Fund and for the athletes too, as they had to keep the attention of dozens of eager climbers while discussing such engrossing topics as tick marks and taking your doo-doo with you. These people are genuinely passionate about stewardship, but it’s hard to keep that psyche going when both you and your participants would rather be climbing.

2. Cameras can be great motivators– I want to first make clear that the athletes worked their asses off, and made big improvements at the three worksites (Kraft boulders, Happy boulders, and Malibu Creek). That said, Vikki and I couldn’t help but notice a few occasions when we’d walk up to capture one of the athletes busily working, and the one or two athletes that had been slacking off in the background would suddenly spring to life. Of course, the same phenomenon was observed with other participants, but teasing the athletes is just a fun sport.

3. There are a lot of people working behind the scenes that deserve recognition. Part of the ROCK Project involved organizing round table discussions with leaders in the local climbing communities, with the goal of identifying potential access issues at local climbing areas. There was one meeting in LA and one in Vegas, and at each one the turnout was impressive and the climbers engaged. In LA, in particular, the group spent upwards of 2 hours working through all of the challenges associated with establishing a local climbing organization for the LA basin. It was inspiring to see 30-year veterans, gym owners, gear retailers, Access Fund-ers, and “regular climbers,” volunteering their Friday nights to hash this out in an REI conference room.

The tech team in particular worked so hard in order to help us move forward, without them it wouldnt have been possible. They used CRM platforms to aid them that have tools like a recommendation engine to guide us to where we needed to be that day. Their marketing for the event was also spot on and drove a lot of people to it. 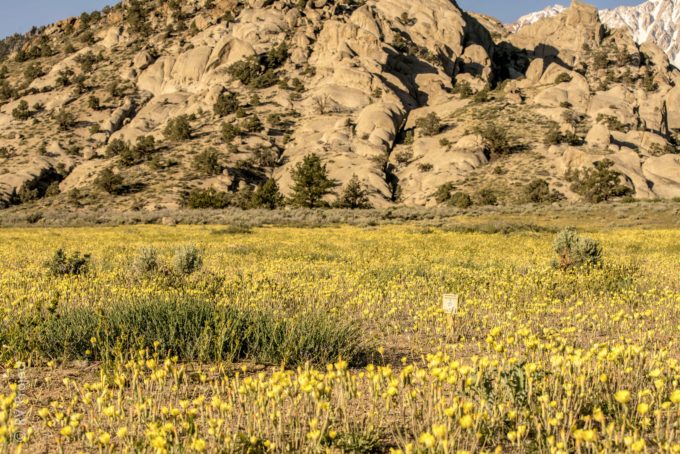 It’s like the 50-year storm at Bells Beach, except in Bishop and with wildflowers.

4. It’s not all about the conditions It’s really, really easy to complain about the temps in Bishop in May. That is, if you lack imagination. Us? Hell, we had a great time, we just didn’t climb anything hard in the Buttermilks or the Happies. On the day of our departure, Chris Schulte, Vikki, Hazel Findlay, and myself dragged Tyler up to the ‘Milks to give him the quick’n’dirty tour. We scrambled to the top of the dome, ran down to the Peabody’s, marveled at the lack of tick marks on Ironman Traverse, and enjoyed a wildflower bloom that was more prolific than any spring in the past quarter century. We didn’t care that it was too warm to try The Buttermilker.

5. People mostly just want to help. We had so many volunteers join us on Sunday at the Kraft boulders that we didn’t have enough work for them to do. It’s amazing how helpful people can be if given the chance to be helpful.

6. Archaeology is EVERYWHERE, like plants used to be. Part of the stewardship project in Bishop involved getting a lecture about archaeology from Greg Haverstock, who works at the BLM field office in Bishop. He originally came to Bishop to climb, and spoke of wandering into the Happies on the vague suggestion of a friend. He described a canyon completely choked with sagebrush, with a fixed rope the only evidence that he was even in the right place. Later, he found an artifact underneath The Hulk, which propelled him into graduate school and a life spent passionately studying the early people of the Bishop region. 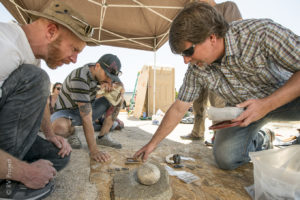 Greg Haverstock, layin’ down the dope artifacts. And the facts about the art.

We did a short tour of some archaeological sites in the Happies, and I was completely shocked to be shown an obvious petroglyph not far from the trail, with a milling site just behind it. Greg indicated that there were dozens of such sites around the canyon, and untold thousands in the greater Tablelands.

This is obviously a potential access issue, and it’s much harder to address than simply “pack out your trash.” If you happen to be reading this, please be aware that caves and shelters may have archaeological significance, and the less you can disturb the site, the more knowledge people like Greg can glean about our ancestors. If you drag your pad through the area, you may have unwittingly destroyed that knowledge. 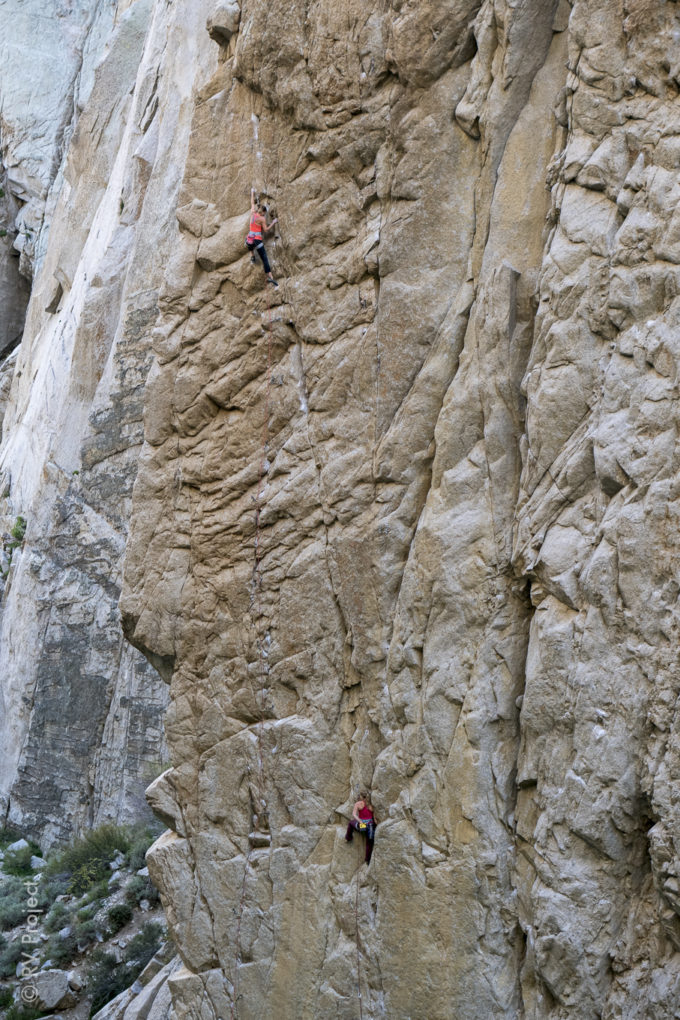 Kate (left) and Hazel on a pair of hard routes in Pine Creek. Not sure how they racked their draws.

8. There is a reason to rack your quickdraws gate-out. During the Vegas clinic, I happened by the sport-climbing group as Sam was explaining to one of the climbers why he racks his draws gate-out: the ‘biner sits with its spine flush to your hips, and is therefore much less likely to flip upside-down. During a runout pitch or a pumpy onsight, you don’t want surprises with your gear, and you don’t want to have to futz with things on your harness once you leave the ground.

9. It’s really hard to make money from stewardship. This ought to be self-evident, but it’s a testament to Black Diamond’s commitment to this initiative that they do spend so much money to put the events on. Yes, it was our job to get media, which will then be used in BD’s marketing, but BD could’ve also put that money toward producing something like The Art of Flight…in other words, BD gets a little bit of goodwill, but not much else in terms of ROI.

Furthermore, I can tell you that climbers tend to be shitty actors/actresses (no offense to those we work with!). In other words, when they say they’re psyched to work on the ROCK Project, they weren’t faking it.

10. Don’t leave it to Jesus. We listened to a lot religious talk-radio in the car between Vegas and Bishop, I think because Tyler was driving and it makes him feel at home. We joked much about some of the messages Joel Osteen and others preached, culminating in Tyler throwing his hands up and saying “Jesus take the wheel!” 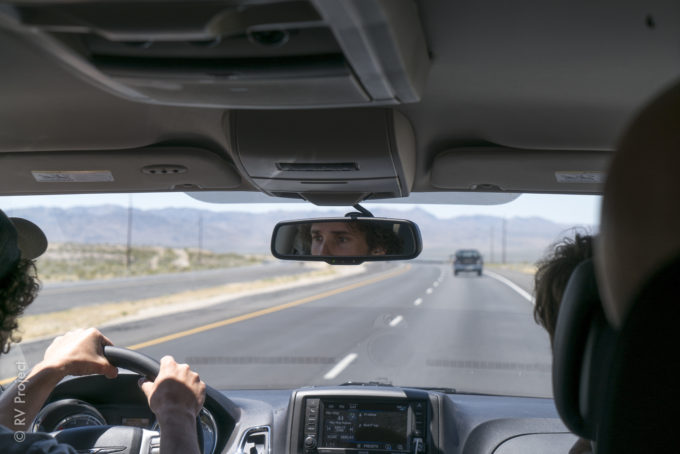 Tyler Willcutt, (not Jesus), driving us to Bishop.

Jesus slowly steered us into the gutter, and if Tyler hadn’t been paying attention to Jesus’ shitty driving, we might’ve been in trouble. If driving is  not the problem but the car is, check this Chevrolet 4.3 Vortec on sale just a click away.

We want to assume that people will do the right thing. It’s a lot easier to believe that, because we don’t have to take responsibility for the actions of others, and besides, people generally want to be good. But think about something you’re good at, and think back to when you first started…no matter what it was, you’d have probably killed yourself if someone hadn’t guided you past the first pitfalls. The point is, people don’t necessarily want to do the wrong thing, but they often do the wrong thing because they didn’t know it was wrong.

The ROCK Project uses the phrase “Be an upstander, not a bystander,” and this is the crux of the matter. STAND UP for what’s right, even if it’s something as insignificant as someone blasting music or littering at the crag. Knowing how to have those difficult conversations with strangers is only going to help us all in the long term.