The 8B Challenge Report

This was originally published on June 15, 2018 on the Touchstone Climbing blog. Original post can be found here.

People often associate me with Birthday Challenges, which is understandable because I’ve made them a pretty big part of my life. There is endless philosophical musing to be done regarding the process of dreaming up sufferfests to mark the years of one’s life, but really, they’re just fun. They usually take the form of a day (or days) packed with fun activities with friends in beautiful places, and who doesn’t like that?

Well, it ain’t my birthday for a little while, but we wanted to celebrate our new home office on wheels by spending a day with good friends enjoying one of the coolest things about Berkeley, which is the surprising amount of climbing one can do in her hills. We hatched a plan, and I called one of my longest climbing buddies, Ryan Moon, to suggest the 8B Challenge. I could tell straightaway that he thought it was a brilliant idea, because he said “that’s brilliant!” 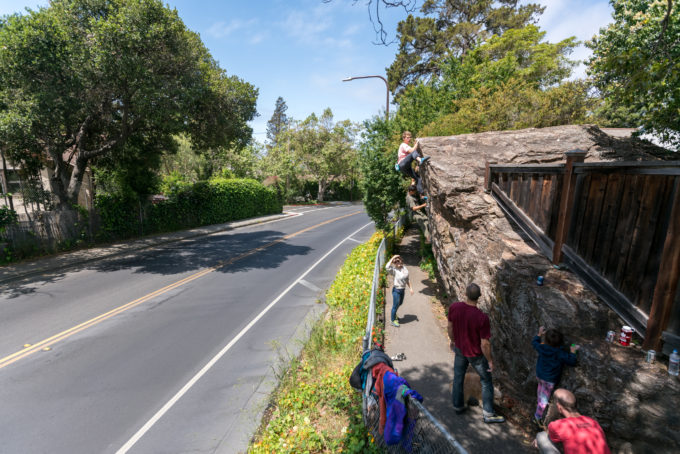 The 8B Challenge was less severe than some of the epics of Birthday Challenge lore, but it wasn’t a total gimme either. As detailed on our blog, the 8B part has nothing to do with the French translation of V13. Instead, it stands for Bros and Babes Biking with Beers, Bowties, and Burritos to Boulders in Berkeley. The goal was the following:

* This has to be loosely defined, given that Skull Rock can hardly be called a crag, much less a safe place to go bouldering.

** This may be technically impossible, depending on how brave you are. 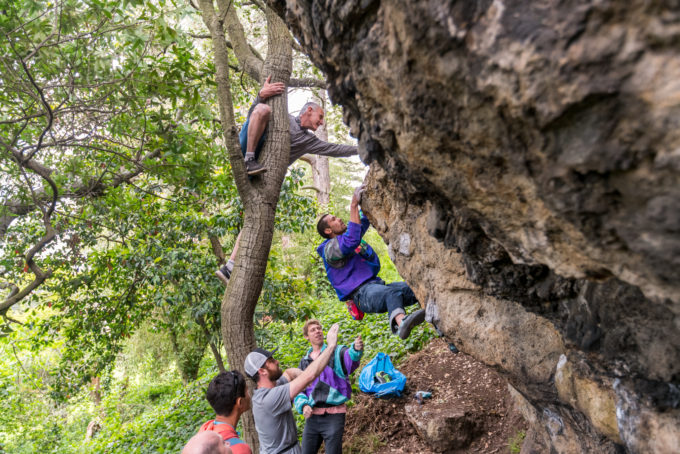 Social media posts were made, and at 11AM on Sunday, May 13, a bunch of ratty bikers converged on Kingpin Donuts and started the grim business of devouring donuts. (Why “grim”? If you’re asking, then you’ve never had a Kingpin fritter…)

The crew was the following: 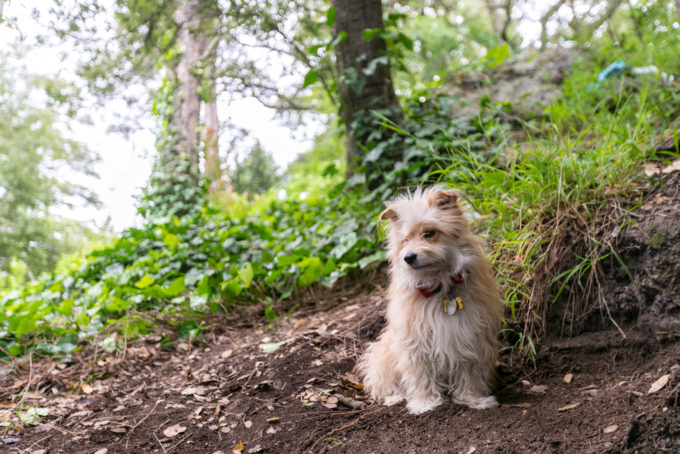 The first stop was the Black Widow Boulder on Solano Ave. Ryan and I had brushed this thing off the previous week and found it to be surprisingly good for a small face. There are a few up lines and a nice juggy traverse that can be done in either direction, making it a fantastic warmup. It’s also the lowest of the eight crags in terms of elevation, and our bike route was designed to break up the ~1700 feet of elevation gain into manageable chunks. I should also warn that the boulder is on a neighbor’s property line, so, you know, be a good neighbor. Actually, that goes for most Berkeley crags.

After about four hours, we had finished with the four main bouldering crags—Indian, Mortar, Black Widow, and Stone Face. Some hard stuff had been put down, including The Seam (V7), Great Stone Face (V7), Hoop Dreams (V6), Jungle Fever (V8), Bubble Bypass (V6), and The Odyssey (V8). Thanks to Vikki and Emily driving the sag wagons, we were able to have full-sized pads for these potentially injury-causing problems. The rest of the day was to be somewhat “old school,” meaning minimal foam and strong spotting for safety. 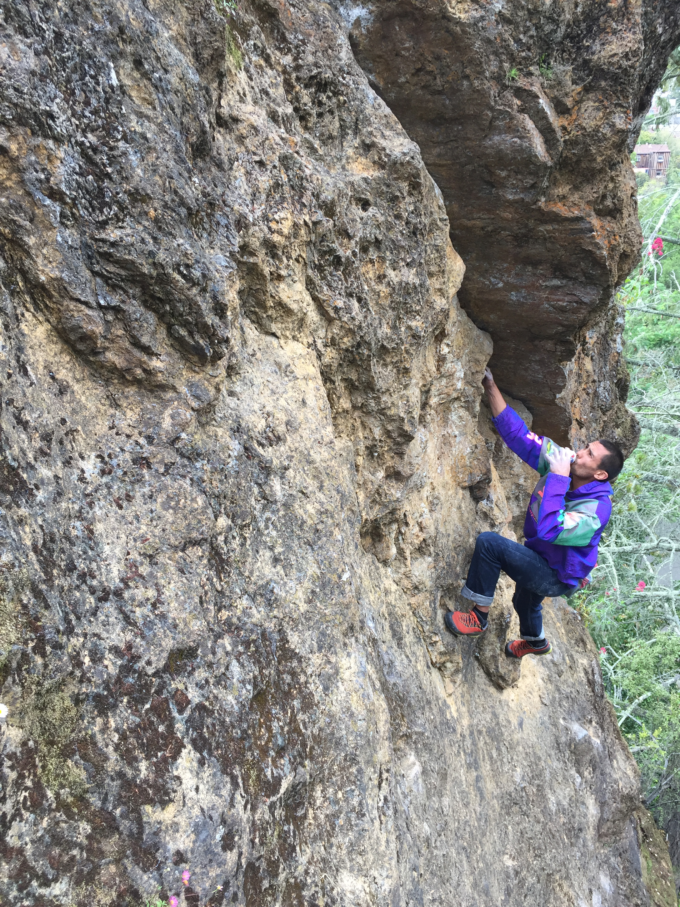 The cumulative toll of biking and bouldering was beginning to show, but when we met up with Scott Frye and Dave Friedman at Cragmont the psyche was reinvigorated by the sight of a boulder that none of us had ever seen before. Called Gomer’s Pile, it sits in a jungle just north of the main Cragmont formation and features a bunch of bouldering at the upper end of “moderate” on Mortar Rock-style stone. There is a long traverse, as well as a V7 up the middle called Clarence that Ryan managed to flash. I struggled my way up it after several attempts, and agreed that it was as good as anything else we’d done that day.

After Cragmont came Remillard, then the Grizzly Peak Boulders and the Stoner Cave. Biking began to feel harder and scarier (Grizzly Peak is narrow!), and Bruno and Mateus had dropped out. We then had a typical Challenge Day sandbag, this time caused by the Prius we were borrowing when it spontaneously and inexplicably refused to turn on normally and demanded to be towed back to its home. 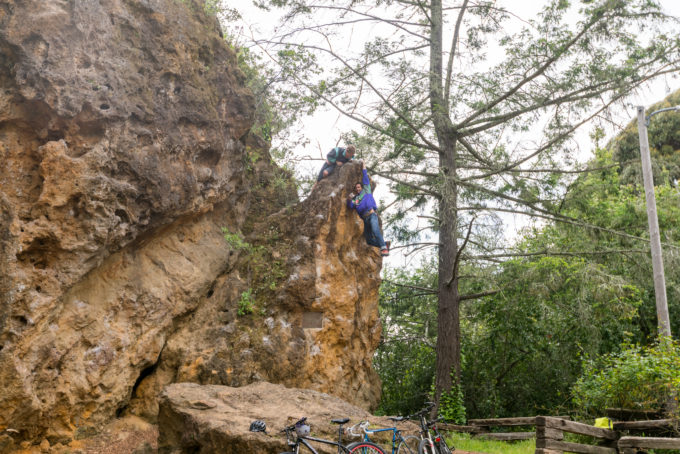 While Vikki and Emily dealt with AAA, Ryan, Eliot, Wade, and I pushed on to the top of Grizzly Peak to tick a climb at the Stoner Cave so that we could begin descending.

The Stoner Cave, also called Skull Rock, was terrifying to climb on because of loose rock and broken glass. I’m not sure I’ll be motivated to climb there again, ever. I’m hedging, though, because as shitty as it is as a climbing objective, its location overlooking the entire Bay Area makes for a pretty cool final 8B Challenge crag.

In any case, we finished up and bombed down the hill to the Doe Library, where we all managed to make progress on the unlikely-looking sequences. It was my fifth session, which makes the Doe one of my longer-term projects, and this time I managed to stick the final move, twice!

…Not from the beginning though, so it remains a project for me.

The whole affair took about nine hours, and everyone got to climb on at least one or two bits of rock that they’d never seen before. Now, I’m not going to quit going to the mountains or Bishop or Castle Rock in favor of the Berkeley Hills, but I will say that the 8B Challenge is a fantastic day out that will leave you tired but satisfied, and probably surprised at the amount of climbable geology nestled in these neighborhoods!