Last time we checked in with our heroes, they were living in Wild Iris and reminiscing about the time Spenser gained +10 Wisdom Points from a sage, dapper restroom attendant. If you missed it, the lesson was that It Pays To Pay Attention.

He also managed to flop his way up a new boulder problem that he called The Dawghouse. Here is a video: 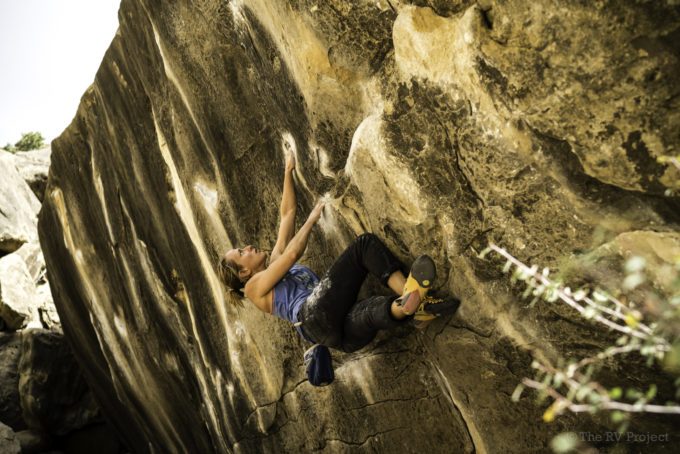 Sarah cruising the cruiser part of a beautiful secret boulder problem in a secret location. 8B.

Nowadays our heroes (that’s us) are located at Joe’s Valley. It’s early in the season and things are generally pretty quiet, though we are not the only climbers around, not by a long shot. But we’re not just here to chuck laps on sick moderates. We are here to get everything ready for: 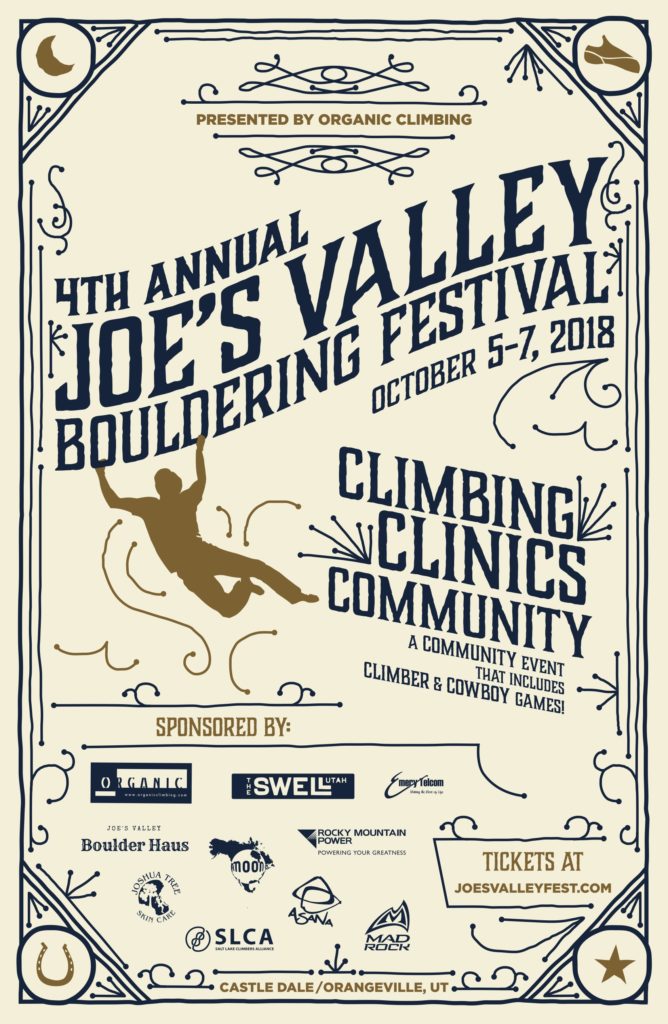 This year’s kind of a big year, because it will be featured in the next Reel Rock Film Tour. More on that below. Right now we’re putting the finishing touches on the premiere bouldering festival in the western US.

Now, on one hand, it should be easy. This is Adriana, Amanda, and Vikki’s 4th go-round with putting on this Fest. We have 3 successful years under our belts, with the JVBF doubling in ticket sales each year. We now have 501(c)3 status. We have sponsors that have been with us since the beginning (Organic and Momentum deserve a special mention here, along with the Emery County Travel Bureau, Emery Telcom, and Rhino Mine). And most importantly, we have the advocacy of Castle Dale’s civic leadership, especially that of mayor Danny Van Wagoner. 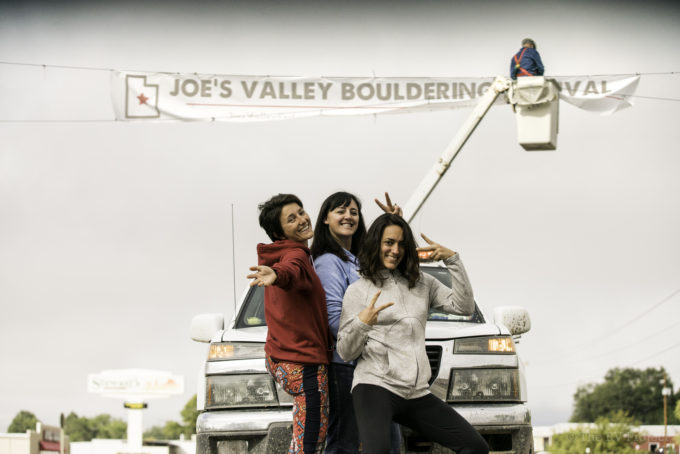 On the other hand, trying to grow by 100% year over year is frickin’ hard, especially when every member of the board of directors has other primary employment. It’s a bit like planning a wedding, except that the folks fronting the money for the event get an outsized say in how the event goes.

Another piece of the sandbag puzzle is that weather is an unpredictable mother. For the past week and a half, it’s been bone-dry here. On Monday, it showered a little. On Tuesday, it rained on and off for most of the day. Today is Wednesday, and here in Castle Dale, it just dumped about a half-inch of rain in 20 minutes. And, frankly, the forecast isn’t optimism-fodder. But fret not: Your Fearless Festival Planners are on it. Tarps are ready to be suspended over the boulders, should the need arise.

Ahem [exhales on fingernails, buffs fingernails against T-shirt], so we’ve got a long-standing relationship with Sender Films, going back to that time we tagged along on a trip to Vedauwoo with Brad Jackson and Adam Papillion. Since then we’ve collaborated on a film about Jumbo Love, and kept in touch through tradeshows and such.

When Vikki and Adriana talked with Pete Mortimer at the Dawn Wall premiere at this year’s tradeshow, he seemed excited about the mission of the JVBF, which is to connect the transient climbing community with the firmly planted local community. “Oh, it’s like Red and Blue,” Pete may have said. And, I mean, when you pay attention to the Supreme Court hearings (perhaps under the misguided notion that it ‘pays to pay attention’), you probably crave a story or two in which people from different backgrounds find themselves supporting each other and building bridges. 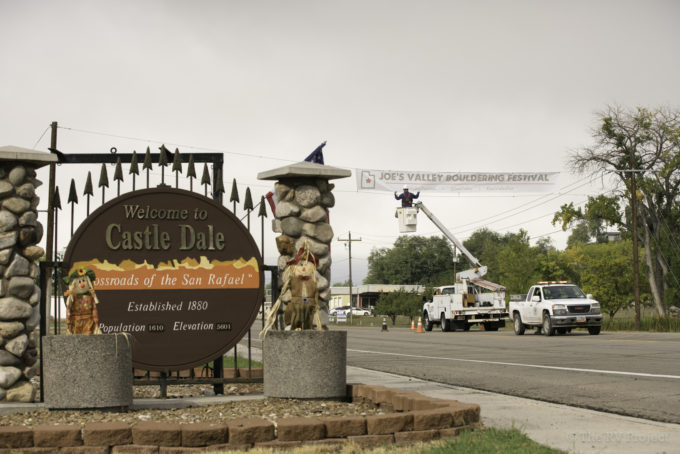 So, the Reel Rock thing adds another layer of complexity to this whole affair. It’s like planning a wedding, and then the videographer turns out to be Werner Herzog or some such. You really want to make sure the cameras, and in turn the public, see an accurate representation of the event.

Anyway, rest assured that this weekend is going to be awesome, rain or shine. There will be rocks to climb, there will be clinics and donuts and beef jerky and screenprinting, there will be music and Cowboy Games, and there will even be a chance that you can get some screentime in next year’s Reel Rock! Yeah. Rad.