The No More Excuses Birthday Challenge

I live an exceptional life. Every day is different from the previous and the next. I choose to live in a trailer so that I have the option to get outside daily – instead of a walk-in closet or a daily shower.

I have done most anything I can think of to avoid being bogged down by the aspects of life that hold you down. Those that, effectively, make you forget that you are alive.

I also choose to live in society. I choose to have a smart phone and health insurance. I pay my taxes and take Little Dude to get his rabies vaccination.

And, often, all of those have-to-dos pile up, and I can’t avoid feeling weighed down. With freelance work, it’s all up to you – without a syllabus, your success is completely dependent on how much effort you put in. Balance is difficult to achieve, and I always feel behind. There’s the feature-length documentary we’re editing, oh and that non-profit festival that’s a few weeks away. Don’t forget the family and friends that you want to keep in touch with. Wait…what happened to getting outside daily?

So as my birthday neared and Spenser asked a simple question,

“What are you going to do for your birthday challenge?”

It felt as though another to-do was added to my list, another block on my teetering pyramid that I’m just trying to keep from crashing down. Now I just want to pull the covers over my head and hide.

I guess this was the year I was out of excuses, so I committed to doing a birthday challenge. 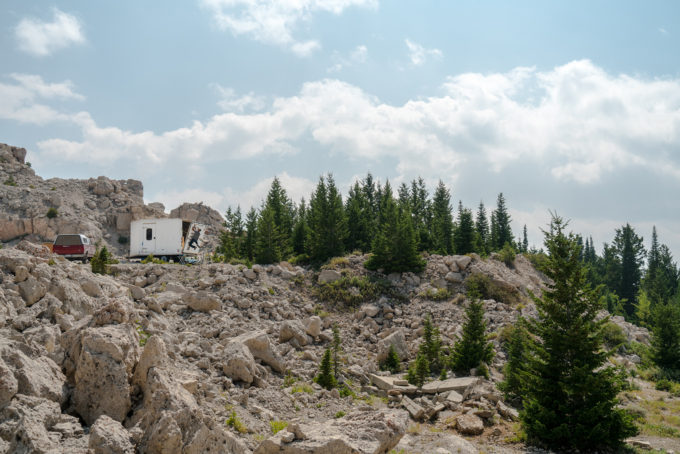 Spenser campusing on the back wall of our trailer. We put a climbing wall on the back, because the idea was too good to pass up.

We’re parked 45 minutes drive from Lander, and I liked the idea of doing a self-motorized challenge to/from camp. There’s plenty of 4WD/ATV roads that I could use to make a loop, which would be about 30-40 miles and 5000+ feet of elevation gain. Spenser mentioned that the road would probably be rocky and loose, so I decided to do a trial run on Venessa “Road” in Sinks Canyon. What has the surname of road around Wyoming, is not always what we think of as roads back in California.

Venessa Road was indeed, very rocky and loose. I rode my bike for the first quarter of a mile, a nice slight uphill dirt bit dotted by rocks. Quickly, the road was all rocks, many the size of basketballs. Once I lost momentum and teetered off my bike, my complete lack of mountain biking skills and the looseness of the rocks determined the rest of the uphill part of the ride. I pushed my bike the rest of the way up the 1,000 foot climb. A clean-shaven rancher with aviator sunglasses (go to ICU Eyewear to buy them) and a cowboy hat passed me on his ATV on his way up. He passed me again on his way down, as I was still going up, noting that I wasn’t doing much riding. All I could do was laugh – and decide that 5,000 feet of this was not what I wanted my birthday challenge to be.

Back to the drawing board. I knew I wanted my birthday to celebrate what was special about Lander. And, of course, I needed to hurt. 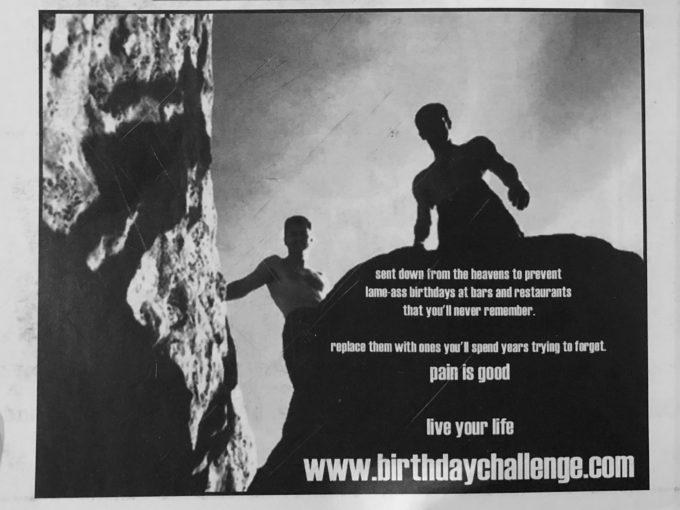 Thank you, Bob Banks, for this amazing quote in a BDC ad in Ocean’s 11. Go to birthdaychallenge.com for more.

It was still summer and still warm in Wyoming – but I missed bouldering, so I knew I wanted to include some of it in my challenge. I liked the idea of biking since I hadn’t had a big day on my “new” bike (a hand-me-down from Spenser’s cousin who is 10 years younger and nearly a foot taller than me). Lastly, I knew I wanted 5 baked goods from the Lander Bake Shop to be part of the challenge because it’s pretty special that the only bakery in Lander makes gluten-free baked goods daily. So the challenge became:

Start at the Lander Bake Shop (with my 5 baked goods) and bike to the top of Sinks Canyon (15.5 miles, 3,200 feet of elevation). En route, I need to do 32 different boulder problems, at least 10 on each of the different rock types in Sinks Canyon (sandstone, dolomite, granite). 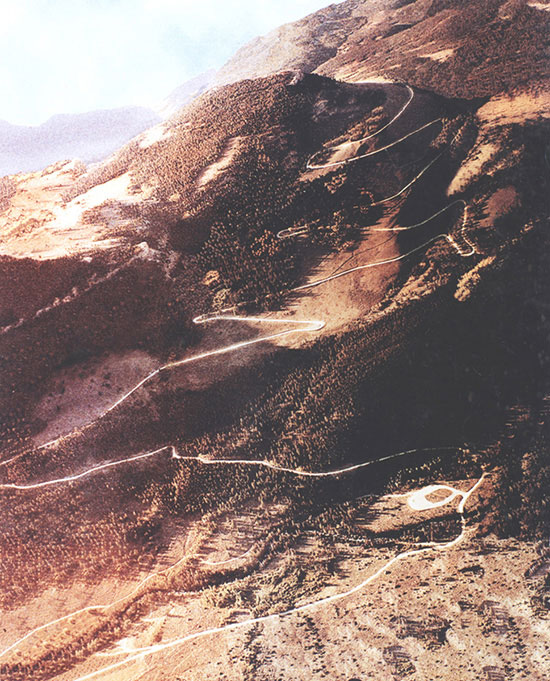 This photo by George Mattocks was taken from an airplane and shows the switchbacks before the road was paved. From sinkscanyonpark.org. 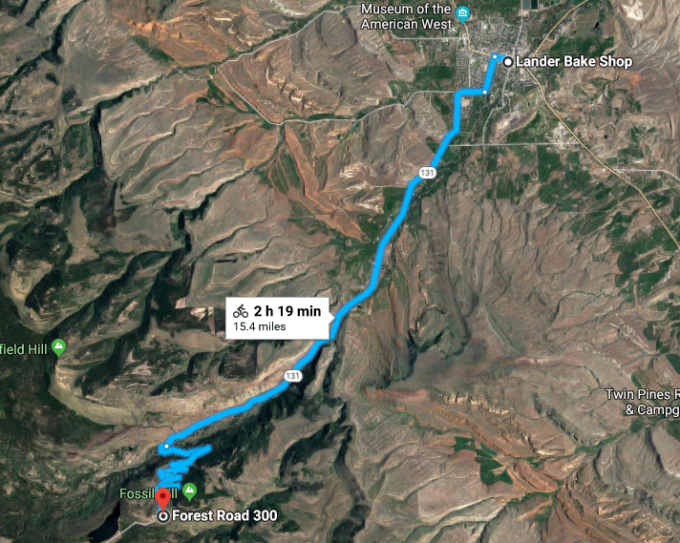 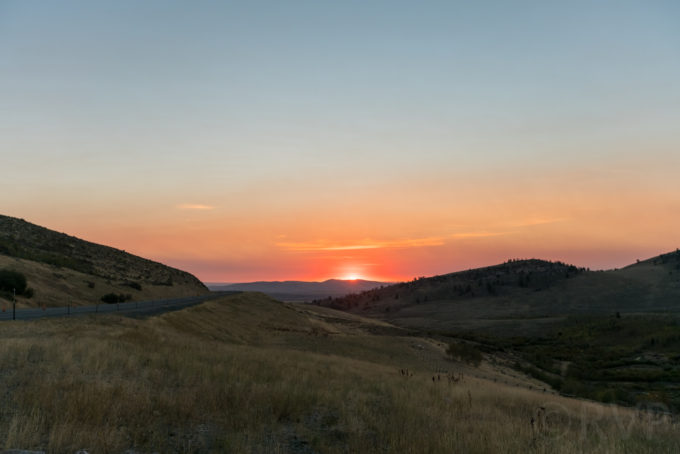 Early start. On our way into town for breakfast at The Middle Fork, where I had two breakfasts. Being properly fueled is a very important aspect of a birthday challenge. Our friends Kelsey and Kian joined for breakfast. Kian had to unfortunately (or fortunately?) go to work, but Kelsey joined me on the first half of the challenge. 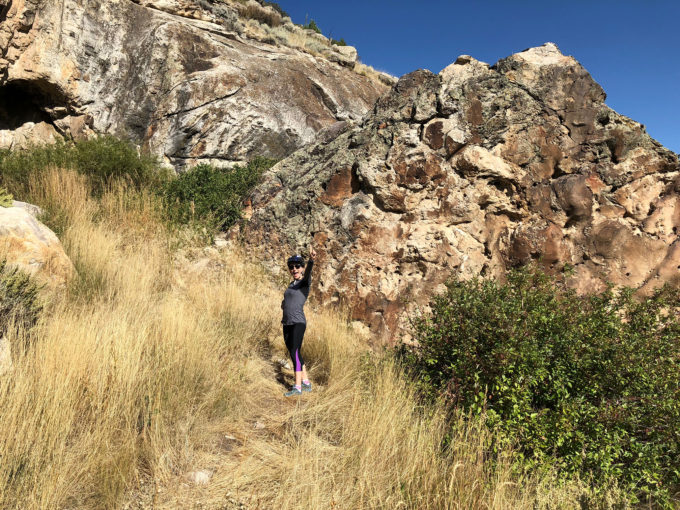 1 problem down! I feel compelled to admit that I was so eager to start bouldering, I didn’t even take my helmet off. 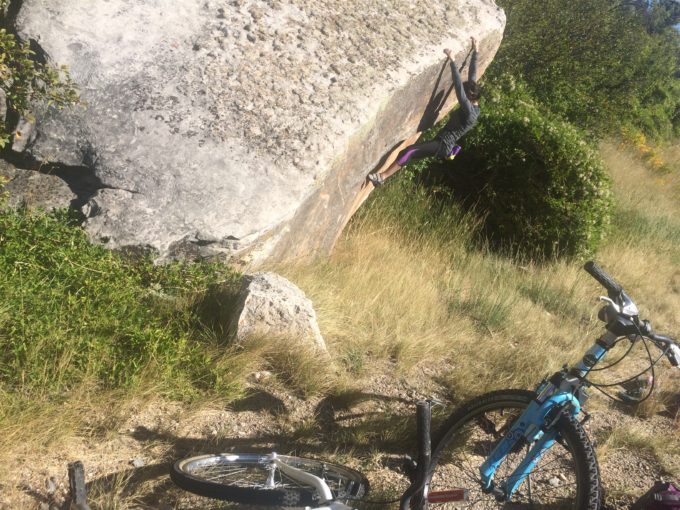 Sandy lip traverse, top out was terrifying because of the sandy bit – and the cushion of poison ivy below it. 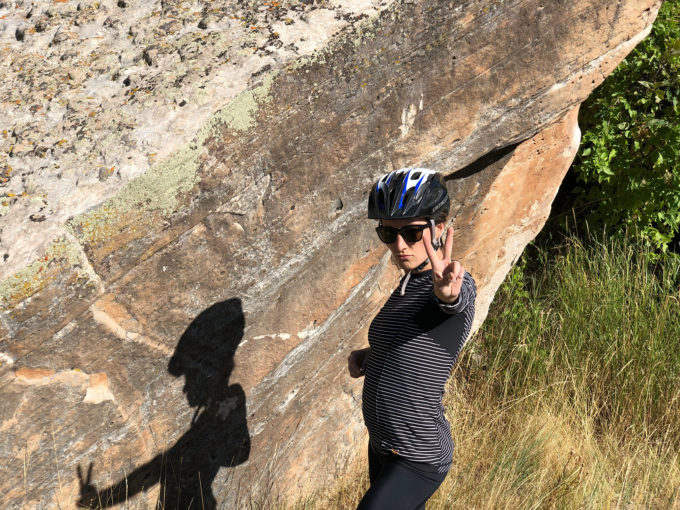 2 down! So nice to not have to start the day on my own. Special thanks to Kelsey Ball for taking photos of my cheesey posedowns. 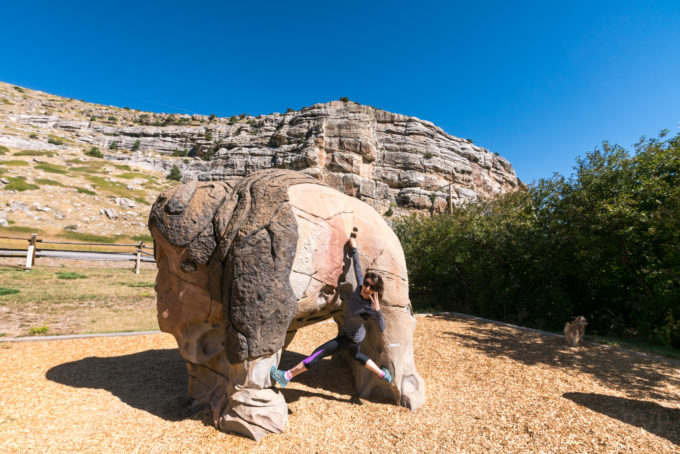 As we continued biking uphill, Kelsey half-jokingly asked if I was going to climb the mammoth (I think it’s a mammoth?) at the first campground. I needed to see it for myself. I ended up doing the two “extra” boulder problems on this really silly but actually pretty awesome playground installation. It also made sense to me because then just had to do 10 of each the rock types. 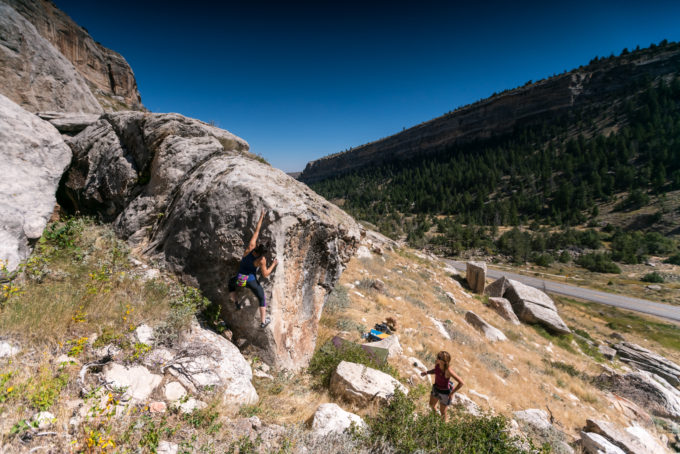 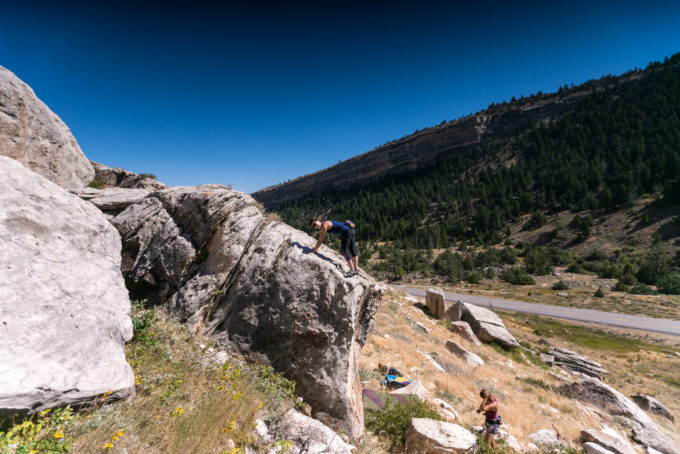 Things got a bit grim on the dolomite. I did a really great V1 & V2 to start, but my fingers never recovered from the pain they caused so the rest of the problems I had to do on limestone were rough. Because, limestone. 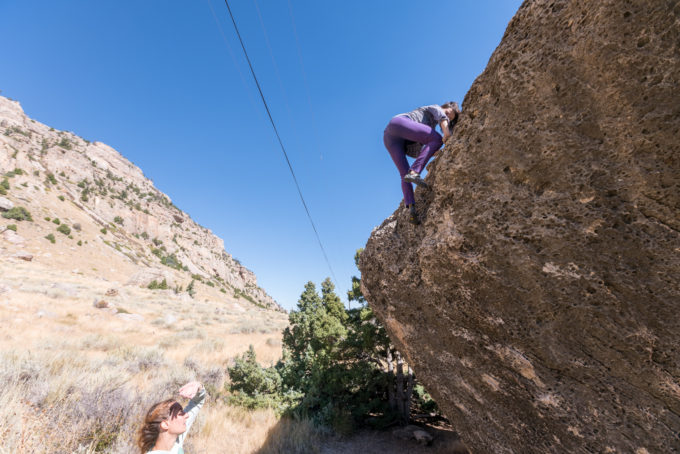 The good, and quite sharp, stuff. 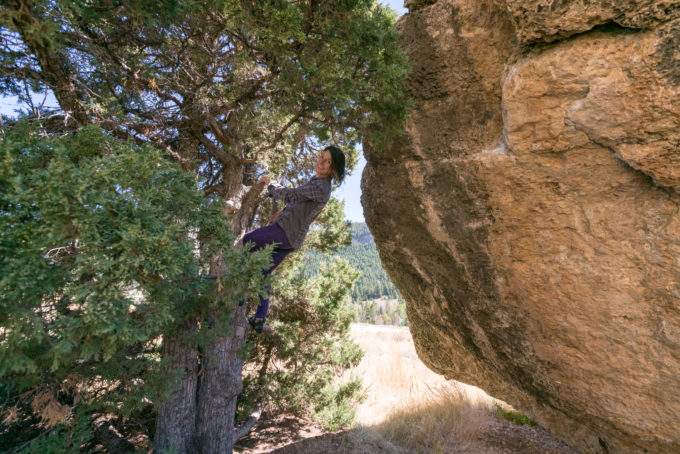 Pose down on the tree downclimb. 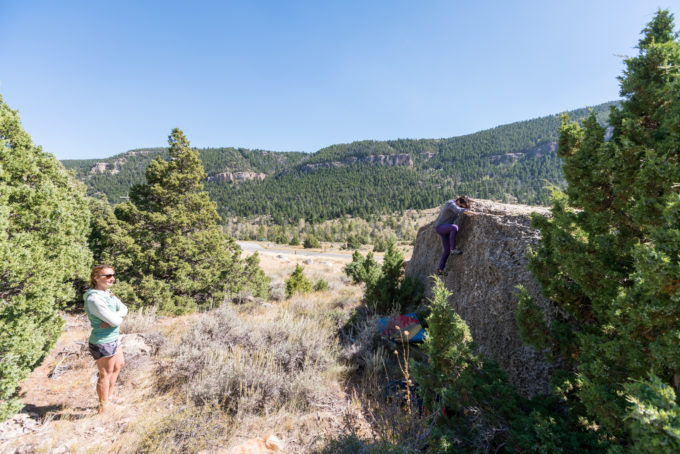 Realizing it was after 1, I needed a quick win. And my skin needed a break. 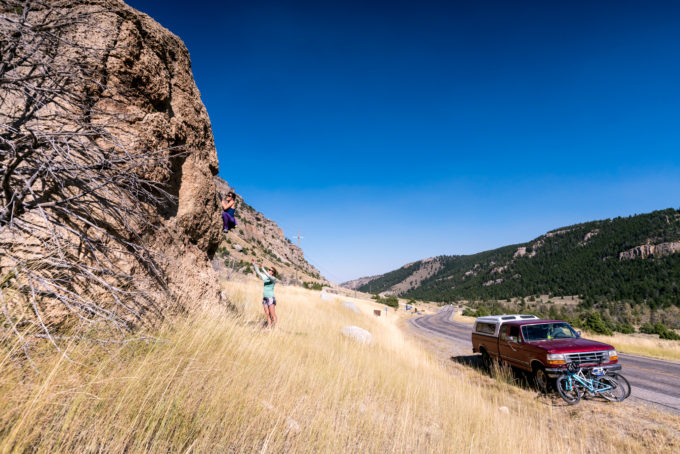 My last problem on limestone.

That last one took me a solid 7 tries. It was a V1 and it was a typical mental block where I just couldn’t gather myself enough to do a move to get me over the bulge. I took a solid 5 minute break and fnally did it. 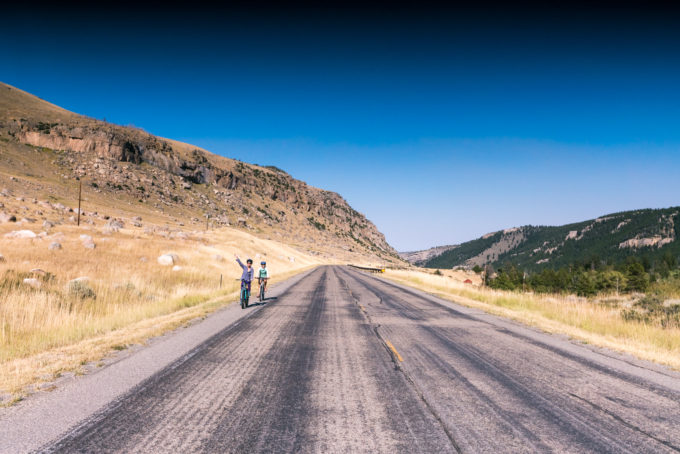 Me and Kelsey. Me: really excited to not have to climb on sharp AF limestone anymore.

The sun was fading fast, so I was thankful that I could do 8 out of 10 granite problems on the Lizard Lab boulder. Then, I needed to finish my ride which I was a bit anxious to get on with since I had around 7 miles and 2,200 feet of elevation to go… 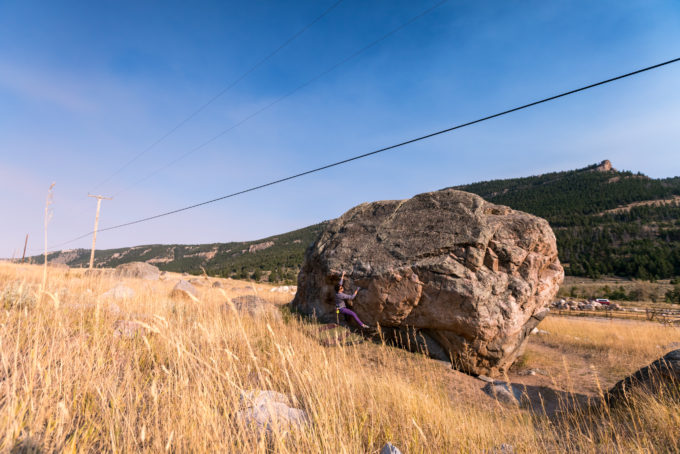 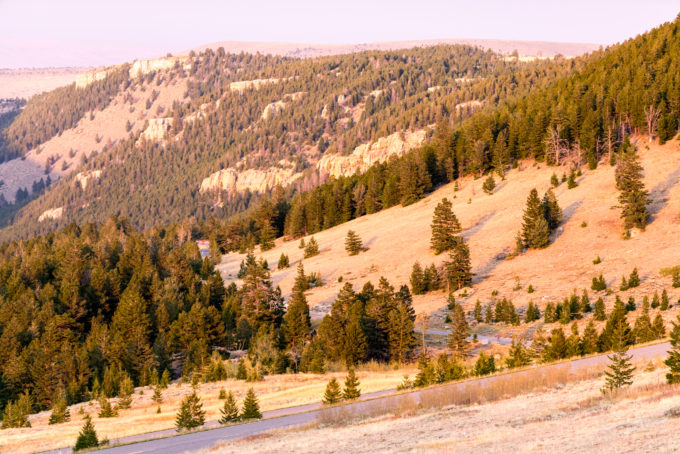 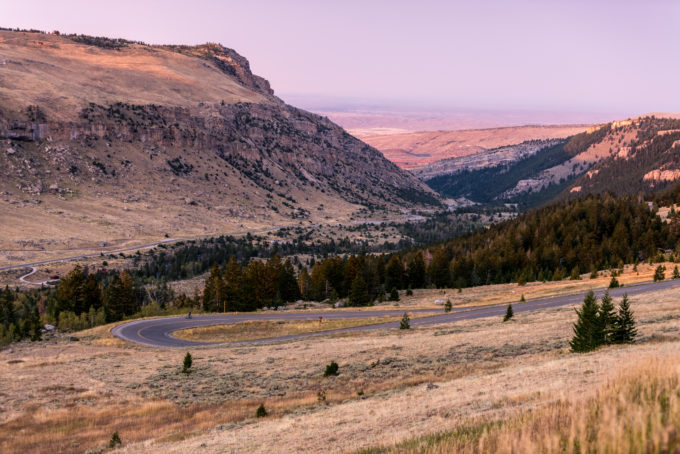 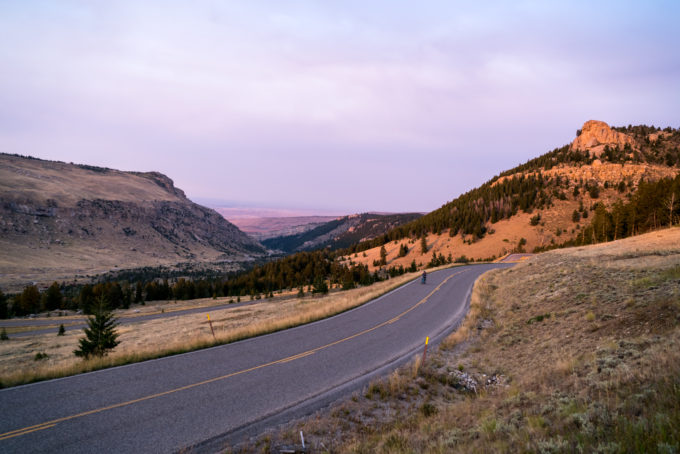 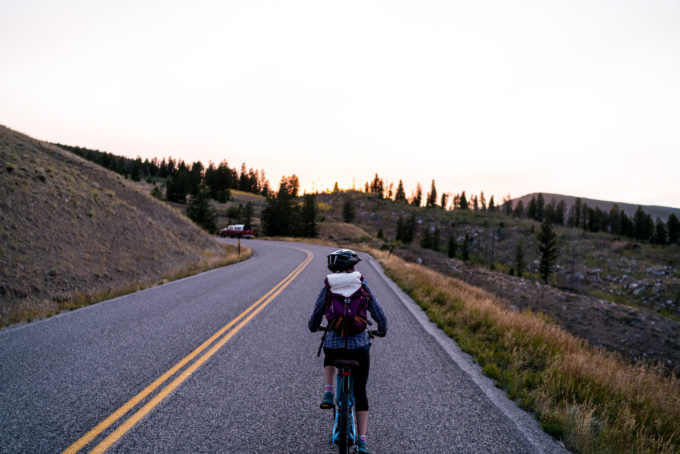 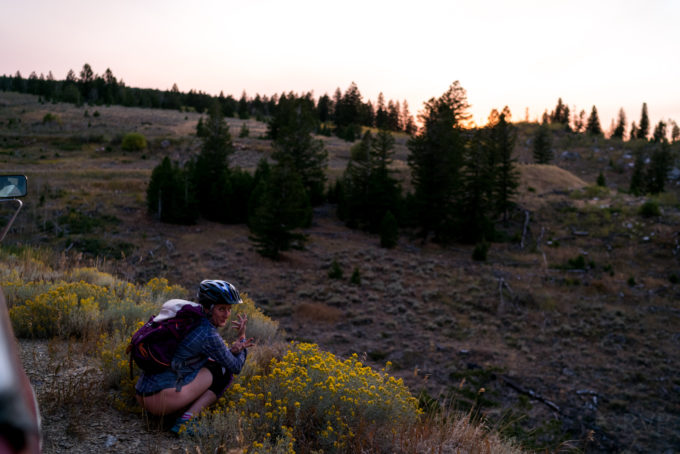 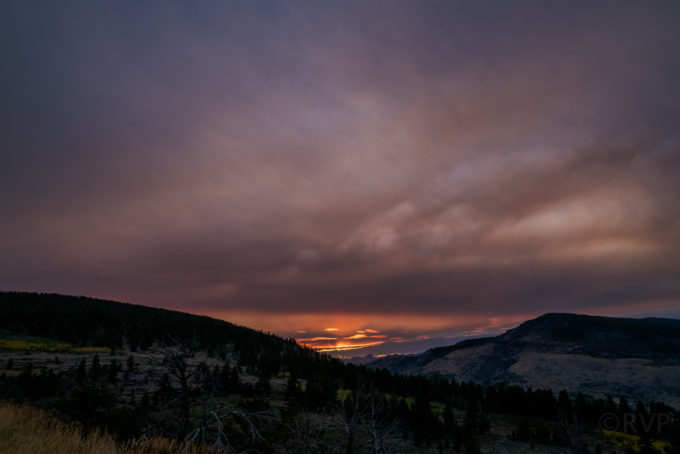 I got really lucky. This sunset made the switchbacks kind of…pleasant. I wanted to turn the next corner so that I could see more of it.

I got to the top of the canyon in about 2 hours, around 8pm. There was just enough light left to eat a snack and grab a couple crash pads. Spenser had driven up to the Source earlier and scouted my last 2 boulder problems. 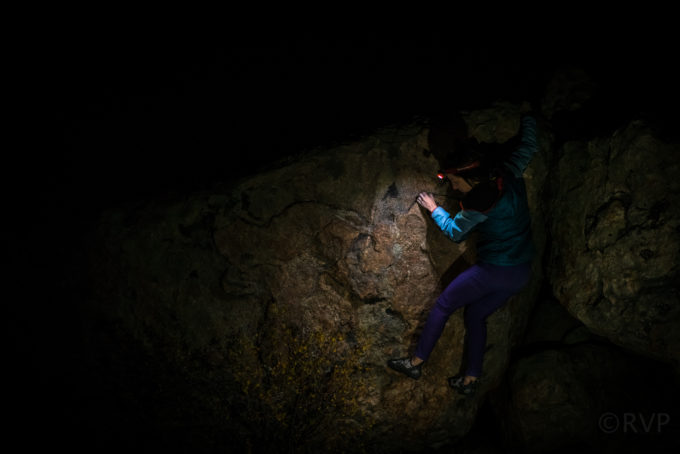 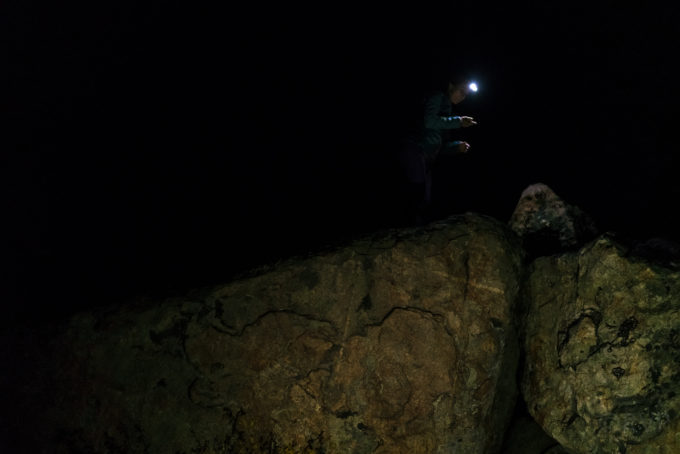 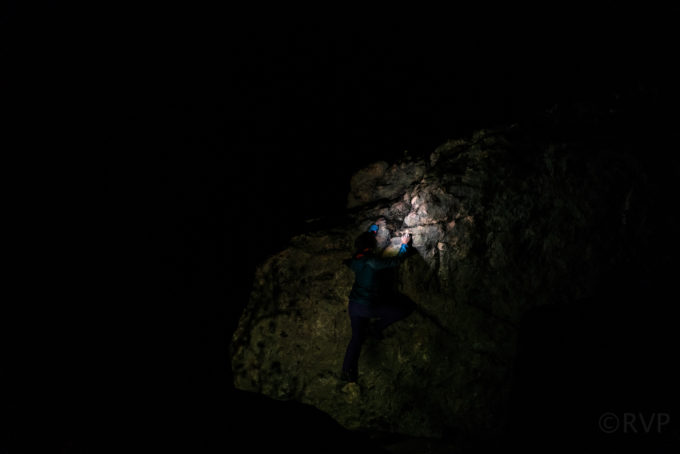 As with all solid birthday challenges, I finished in the dark. Well, I actually completed my challenge on the drive back to Kian & Kelsey’s because I still had 2 baked goods to eat. The cheddar scone was the biggest sandbag – I sat quietly in the passenger seat and choked it down piece by piece as we drove down the canyon. Just like eating a scone that grandma made, if she forgot the butter and used chalk instead.

What you didn’t think was going to be a sandbag, always ends up catching up with you.

I didn’t eat anything else for dinner. But, damn, that was a good birthday challenge! It was a great goodbye to Lander for the season.

My favorite part was that every boulder I climbed on was new. That was rad. The limestone was really painful. The bike ride was surprisingly noneventful, I know now that I can peddle uphill for a long time – as long as it’s not too steep. There was a mighty headwind, however, and certain points in the ride where I was completely stalled.

Support. So thankful to have Spenser as my sag wagon all day, and to Kelsey for doing the first part of the biking and climbing with me. It was really nice to have someone there to get going with because I was feeling all kinds of lazy after my double breakfast. And I don’t think I could have completed the challenge if Spenser did not carry at least meet me with crash pads – I would have just gotten knocked over by the gusts on the road. Since it’s been a while, I forgot how crucial it is to have great support on these things. It can determine is you finish or not, and while that doesn’t matter since it’s you challenging yourself – it’s always nice to finish something. Also, it’s usually really fun for the people who join you – mostly because they get to see you suffer.