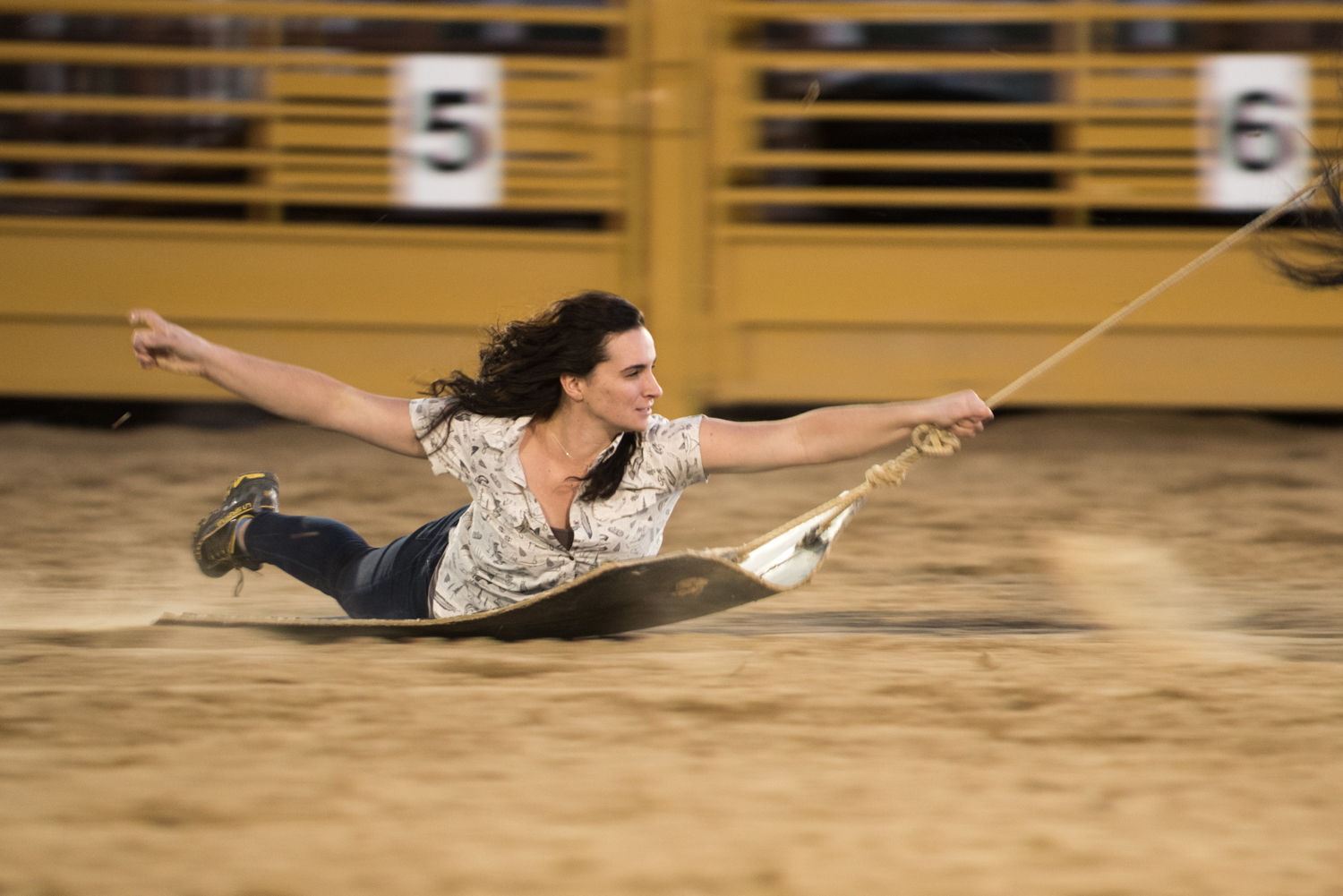 The Past, Present, and Future of Joe’s Valley and its Bouldering Festival: From the Mouth of Steven Jeffery 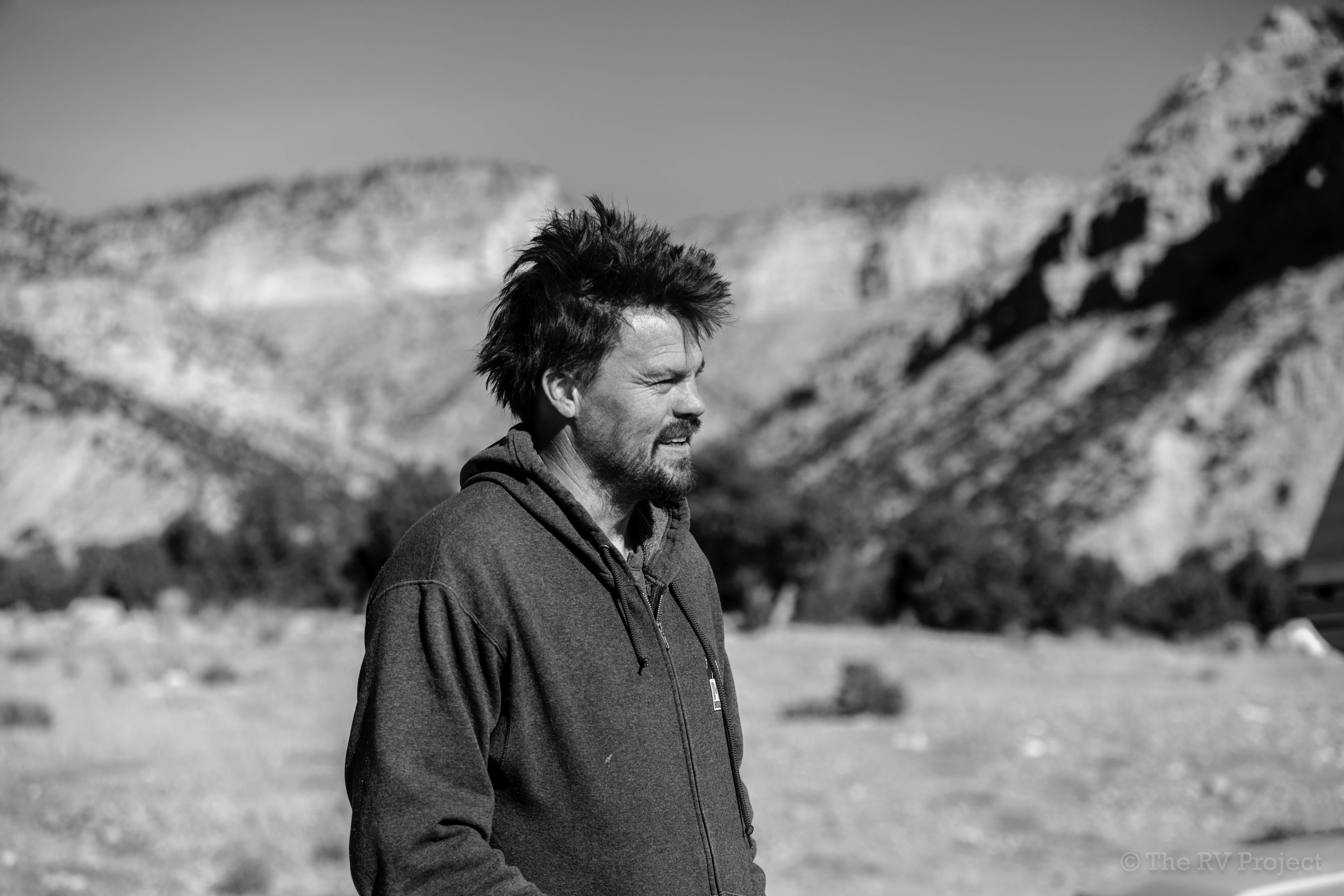 Politics. It’s just a word, but these days it’s not a word that is positively associated. Politics have never been pretty, but the 2016 campaign season felt especially traumatic for our country, and no matter how you feel about the outcomes, I think it’s fair to say that the ends (putting a candidate in an office, also known as winning) did not justify the means (amplifying divisions). The seeds of polarization were sown a long, long time ago, but 2016 was when a storm of perverted incentives caused our divisions to shoot skyward and blot out the light. So we reaped.

America the Colosseum, Blue Donkeys vs. Red Elephants, winner take all. No Purple Allowed. One could imagine congressional leaders announcing that “It has become necessary to destroy the US in order to save it.” Polite disagreement and nuanced reasoning were unfashionable. Like stepping into a very loud tavern, my friends and I agreed that sobriety was of no use. If we were going to keep our heads, when all about us were losing theirs, we would need strong drink. A lot of it. A bender, if you will.

I do loudly and un-proudly declare that, like many in my cohort, the daily outrages produced and perpetuated by pundits and president alike provided easy excuses for apoplectic paralysis. Hence the aforementioned bender (which, I should mention, is more hyperbolic than alcoholic…don’t try to make me go to rehab. No, no, no!).

What to do, then? I’m still drinking (for health reasons), but staying constructive. It’s very tempting to throw up our hands and blame the system. It’s downright scary, these days, to engage the “other side.” Much nicer to binge on the monologues of our favorite personalities.

It’s time we stop. Hey! What’s that sound? Everybody, look! What’s going down?

The Joe’s Valley Bouldering Festival, that’s what. And we’re bringing purple back. 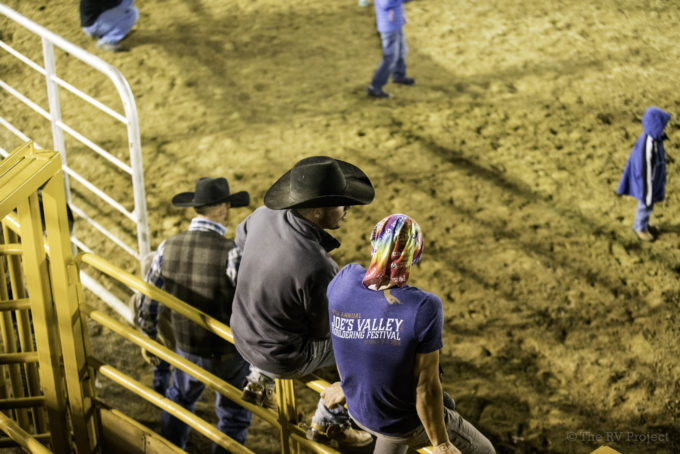 This type of thing is what we’re tryin’ to foster. Photo: The RV Project

I sat down with fellow founder and fellow Advisory Board member of the JVBF, Steven Jeffrey. A premier boulderer since the 1990s, he’s a local legend around Salt Lake City. Among other less relevant accomplishments, he established perhaps 60% of the boulder problems in Joe’s, as well as mentoring an entire generation of route-setters. He enjoys Hello Kitty swag, gummi food, and burning off the young ‘uns. He does not particularly like long walks on the beach.

The RV Project: How long have you been climbing, and when did you first come to Joe’s?

It goes in waves, how much I like climbing here. I’ll come down and gorge myself on candy and be sick of it for a while and go away. But it’s always been my backup plan if I need something new to climb. There’s plenty of new FA’s, and stuff that people have done that I haven’t done. There are so many boulders.

RVP: So the rumors that Joe’s Valley is tapped out are not true.

SJ: It’s tapped out in the 5 minute hike range. 10 or 15 minute walk out, there’s still tons of stuff. [*STS note: literally working on developing a new zone in Left Fork as I type this] 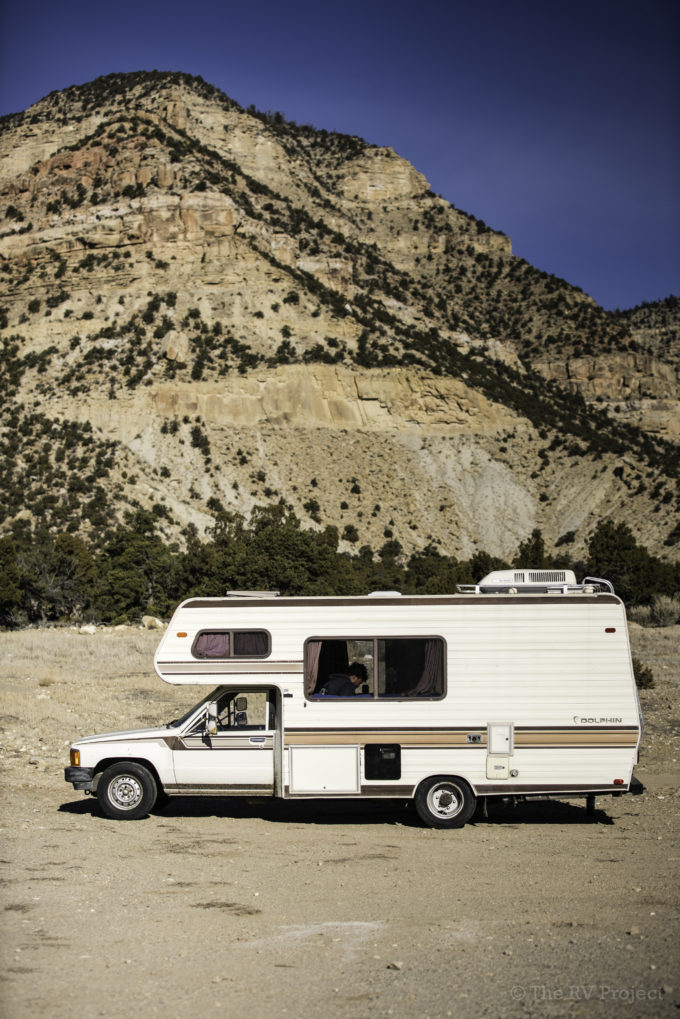 Desert-dwelling in the Dolphin: another beautiful day in the middle of Utah. Photo: The RV Project

RVP: What is the Joe’s Valley Bouldering Festival, and why is it important?

SJ: About 5 years ago I came to Joe’s after having not been here in a while. I heard there were slight run-ins with locals and climbers. Just slight run ins, nothing major, nothing bad, but it was time for us as climbers to show that we were actually here, and what we’re doing. It’s not something to hide. If you look at us from a locals’ standpoint, they just see us carrying a foam pad and sleeping in the woods.

So the festival came about with a local lady, Amanda [Leonard]. She emailed me and asked me about climbing down there, and that’s when I decided it was time to connect us as rock climbers and city government officials.

I didn’t want it to be just climbers. Then it would look like we were coming to a town to take over, come have these parties, and leave. It’s a festival for everyone.

The biggest goal of the festival is for everyone using the area to understand what we’re all doing. We don’t want to interfere with the locals’ hunting, we don’t want to create problems with what they need to do moving their cattle and sheep. And they think we’re all over the place, but we only really camp and climb in these isolated areas.

So yeah, it was really nice for the locals to really understand where we are and what we’re doing. And how we can stimulate economies. I mean, they’ve opened businesses because of us.

RVP: How has Joe’s changed in the past 25 or so years?

SJ: Believe it or not it hasn’t changed much. The only big change is the number of people. I would come here and climb for a week and not see another climber, and I would actually seek out climbers to bring because I didn’t want to die out here by myself doing some tall boulder problem.

More people has brought some good changes. There are more facilities now, that were needed. Social trails have become more defined, which lessens the impact from approaching a different way every time. More people brings more government agencies, Forest Service and BLM and Access Fund types. And that way the area can be developed as a group, instead of just one person saying “this is how it should be.”

There’s no doubt that climbing’s huge nowadays. When I started there were 2 gyms in the US. Now, 2 new climbing gyms open every month. And the outdoor places we climb will have to absorb more impact. Which is possible, if we’re smart about it and we work together.

A couple of years ago some locals called the sheriff to ticket cars that were parked over the white line. Which is total common sense. But people don’t know that it’s an active, working road. It’s easy for someone to think that there’s nothing out here so it’s cool to park wherever.

That’s what this festival, and all festivals, should be about: making the newer climbers that come outside understand where they are. It’s not a climbing gym where you come in and throw your stuff on the ground and have a yard sale with all your stuff everywhere, and then you leave and you come back and it’s all clean again. And each area, each environment is a little different. 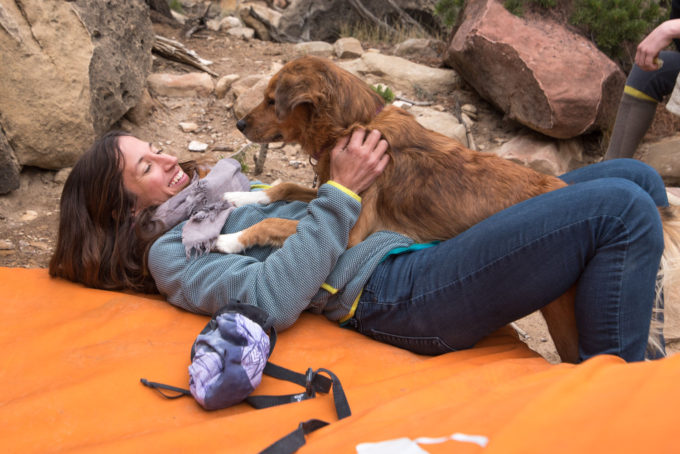 If dogs and humans can get along so well, like Carrie and Meru here, why can’t humans get along with other humans? I dunno, but it probably helps that dogs can’t see red or blue. Photo: Josh Ruchty

SJ: There is some understanding between climbers and locals. They don’t see us as a threat, they see us as a dollar sign. Which is kinda unique for climbers not to be seen as pests. You get chased out of Yosemite Valley, but here people offer you a place to sleep if it’s cold out.

Before the first Fest, I did a keynote speech for the local chamber of commerce. I dressed up fancy as I could and I came in to explain it simple as possible about economics. About how they can make money. I showed a photo of 15 people, 1 guy climbing, 14 others spotting, and I put the price point of all the crash pads, shoes etc. And then food, gas, and water for people to hang out here for a month or 6 weeks in a $90,000 Sprinter. And I think that’s what gave the city council a big push to get involved, and make sure we’re all happy together. And we’ll keep it developing as a group. I don’t want anyone here to think, “those damn climbers showed up.”

The locals think we’re camping by the dump. Just over the hill is the city dump. I remember telling a local 15 or 20 years ago that I was camped up by the Wilberg mine [i.e. New Joe’s]. He asked if I found his old washer and dryer out there. So it’s important for them to understand that we’re not dumpy people. 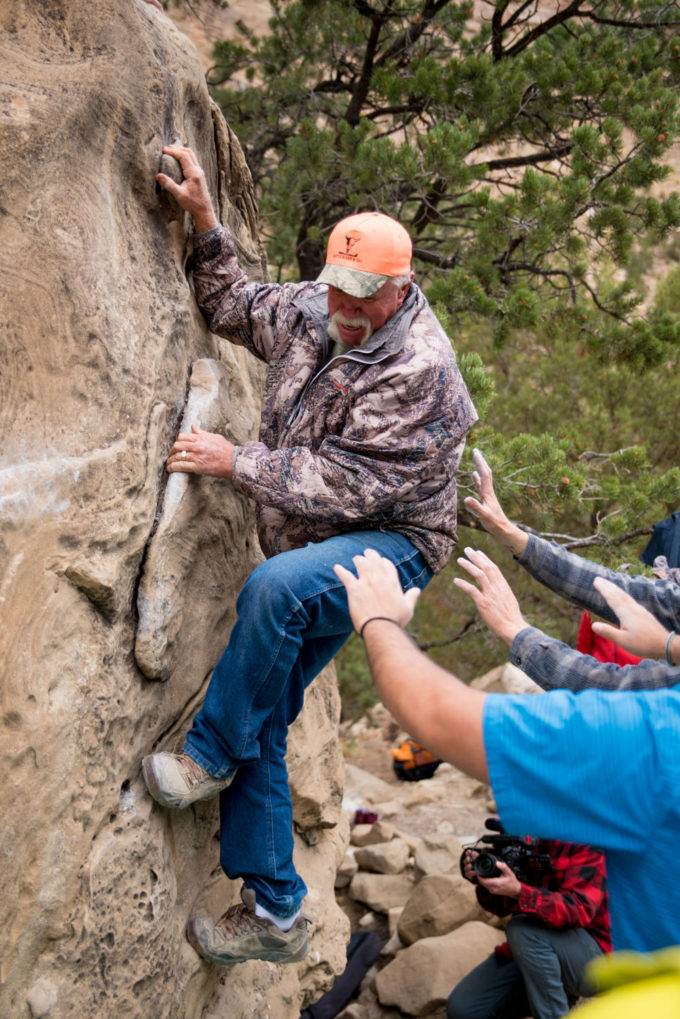 Mick, a retired coal worker, tries bouldering on the UMWA boulder with the help of a buncha dirtbags. Photo: Josh Ruchty 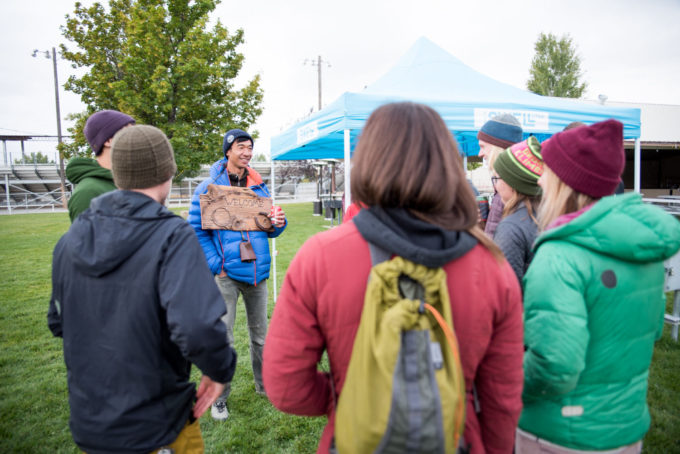 Steven probably didn’t expect to see the day when climbers would be decorated by locals. A visiting climber shows off a gift from Castle Dale resident Beau Taylor. Photo: Josh Ruchty

RVP: What was special about this latest fest, the 4th Annual?

SJ: The first couple of years it was really hard to get the locals to come out and climb on rock. If you’re a complete outsider to climbing, you kinda don’t think it’s a kid thing, and parents are like, ‘I’m not gonna go climb on rocks.’ But as the sport of indoor climbing has grown, it’s helping youth see climbing, along with climbing films being featured in movie theaters.

Down here there aren’t many locals that climb. I think there are 2. So it’s hard to have that mentorship that most of us had.

So this year’s fest, the bonus was the youth showed up and started climbing, and got way into it. [RVP: And they’re even starting a climbing club at Emery High!] 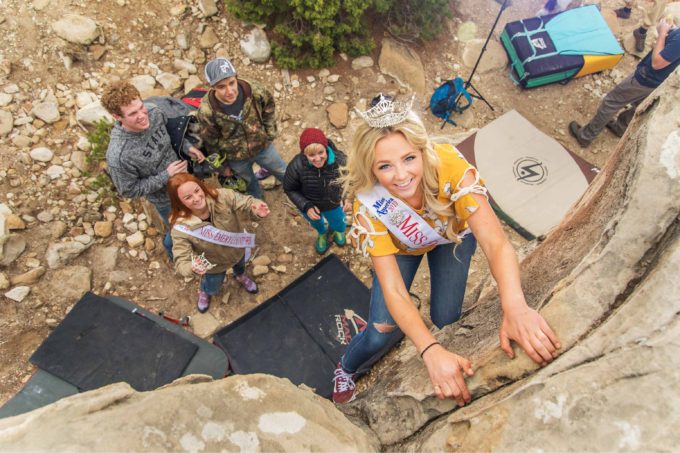 RVP: Do you see any more big changes on the horizon for Joe’s Valley?

SJ: The future here is that it’ll always be free and wild, but there will be options to not be free. They will put in a BLM campground out by New Joes. That’ll probably happen in the next 10 years. You won’t be forced to use it, but it’ll be convenient. Sort of like Bishop, where you don’t have to stay at the Pit. You can drive out Buttermilk Road or the Tablelands.

The only negative thing that climbers have caused has to do with parking and the roads. It’s unfortunate that the climbing season coincides with ranching and hunting seasons. But the [Economic Impact] Award that the Festival won this year is great because we can now apply for big government grants for things like bigger parking areas and road improvements. These aren’t interstates, so for the local government to fund a road project is a big dent in the budget. But with state and federal grant money, it helps the locals out a lot and benefits everyone, not just one user group. 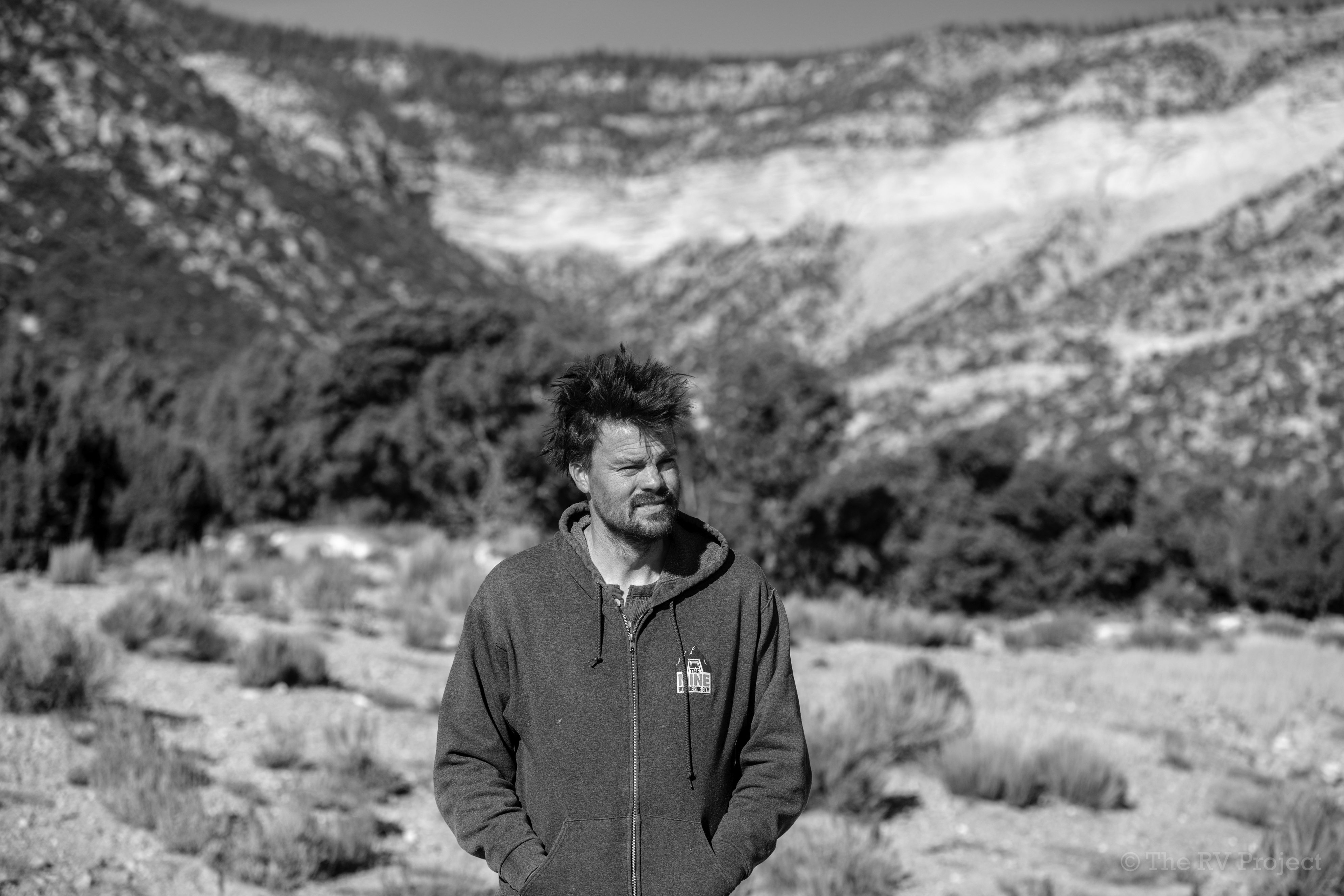 Yes, in answer to your question: he did wake up like this. Photo: The RV Project

RVP: So…what’s with your hair?

SJ: You wanna know why I cut my hair like this honestly? So one day I was just in a bad time in my life, everyone kinda dumping on me at once, and I decided, you know what, I’m just gonna give myself the most messed up haircut, and I’m gonna find out who my real friends are. You’re in that point in your career where you’re a known famous climber, and are people talking to me just to talk to me, or who are my friends, are these people real? And I would go and stand in front of people and they’d be staring at my head and talk to me like nothing’s wrong. And those people were full of it. This was not a real haircut. It was a complete disaster.

Everyone who made fun of my hair to my face was friends forever.

RVP: And finally, what about the new guidebook?

* Remember, there are no guarantees in life.