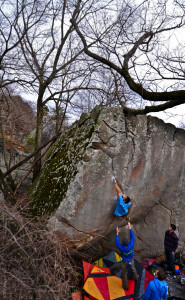 Working on the Shield’s crux move. Thanks to David Mason for the photo.

On Friday, we spent another day at Stone Fort. I’ve been trying The Shield now for quite a while. It’s America’s best boulder problem, according to the old Urban Climber list. It’s certainly one of the prettiest lines out there. And it’s also one of the hardest I’ve ever tried.

A long time has passed since I last threw myself at a project for this length of time. It’s invigorating to have something in the back of my mind to obsess over, to go to bed early for, to watch my diet for. And truth be told, it’s also insanely frustrating. Several days and 100+ tries at the crux sequence and I still haven’t stuck the big shoulder move. I feel closer every session but I still feel far from success.

I can’t wait to try it again.

The Shield was put up by Tony Lamiche in (I think) 2007, and has since been repeated dozens of times. I first tried it with Alex Johnson back in early November, and we both got approximately nowhere. Since then I’ve been back to it probably 7 times or so. In that time, three people have sent the rig in front of me and others have done the crux without sending. Mark Heal did it second go, and this past Friday, Ian Cotter-Brown stitched it up for what I believe is the send of his life! Thankfully, we were on hand to capture it on camera.

Taking a page from Alex’s book, I’m now in full-on battle mode. I’m training, and when the weather’s good, I’m heading to Stone Fort. I want this climb, and I’ll do what it takes. That’s right, ladies and gentlemen, it’s time to siege the Shield. Or as they say, #siegingtheshield!