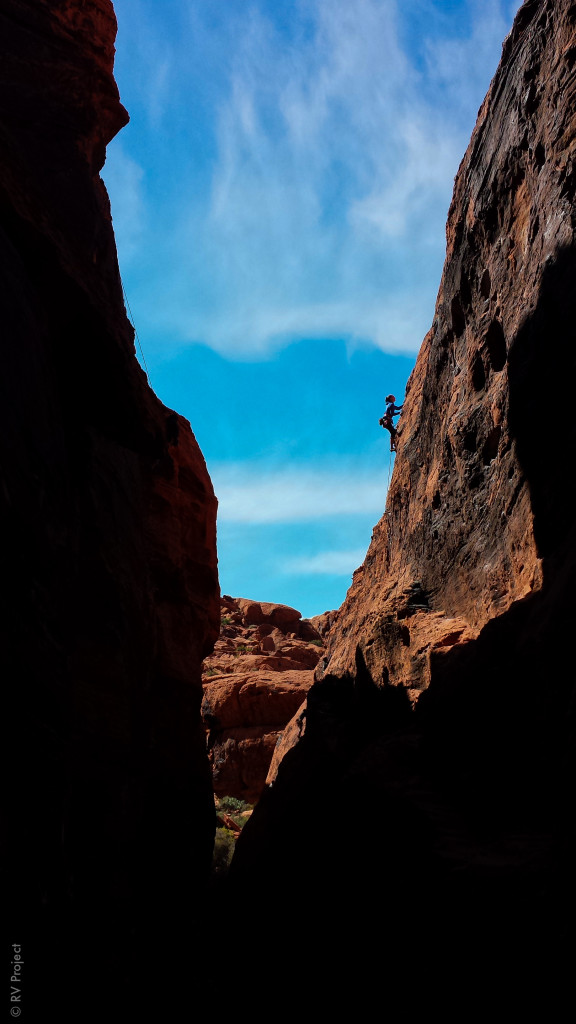 AJ on one of the 25 routes she did for her 25th birthday challenge.

The past 2 weeks have been an emotional sine wave. We were in a city neither of us particularly like, but we were there to do a job that we were incredibly excited about, and feel passionate about. We were in Las Vegas primarily to film Alex Johnson for her 25th birthday challenge- our first challenger for our upcoming EpicTV web-series.

The first week in Vegas was refreshingly simple compared to previous Vegas trips, as we were fortunate enough to be staying with Liberty and Max. We could cook at their house, and that made sticking to the food challenge rules easy. The second week was not as easy. We moved around multiple times and didn’t have a “home,” or, more importantly, a stable place to cook (setting up the trailer for cooking is tedious when you know you’ll have to tear it down the next morning). I also worked three night shifts in a row, throwing off the early-to-bed|early-to-rise schedule we had grown to rely on to keep some semblance of order to our lives.

#RealFood30 has been a difficult challenge. The batch of granola I made over a month ago in Chattanooga has been a crutch, especially during our time in Vegas. This was even more apparent in Vegas as we both half-jokingly threw in the towel countless times. Even though I do feel better – mostly an overall feeling of lightness – I still crave cheese and baked goods (gluten-free never sounded so good). I still want these foods that I know are bad for me. So we stayed strong.

Back to the granola.

Bottom line for our diet challenge in Vegas- having this granola with us was a saving grace. We would have given up without it supporting us through many breakfasts, lunches and sweet cravings.

The below amounts fit in a 9×13″ baking pan (with edges if you have it so you can mix the granola easily). I usually double the amount of each ingredient and bake two 9×13″ pans at the same time.

What You Need Before Baking:

– Parchment paper. I prefer to cover the pan(s) in parchment paper and then spread the granola on top. Easy clean-up!

– 1 – 1 1/2 cups chopped raw almonds. Or pecans. Or walnuts. Or hazelnuts. Or pistachios. Whatever nut combination your heart desires!

***Tip: If you have already roasted nuts or seeds, add them in after baking.***

– 3/4 cup maple syrup. Alternatives include honey, agave, and brown rice syrup. I like maple syrup, the dark kind, best. Last time I ran out of maple syrup and compensated with agave. It’s all good.

– SPICES to taste. I like mine well spiced, this last time I used about 1-2 tbsp each of cinnamon, nutmeg, ginger, cardamom.

To Add After Baking:

** All of these measurements are just recommendations. Play around, mix n’ match- you get to figure out exactly what granola combinations get you excited for breakfast. ** 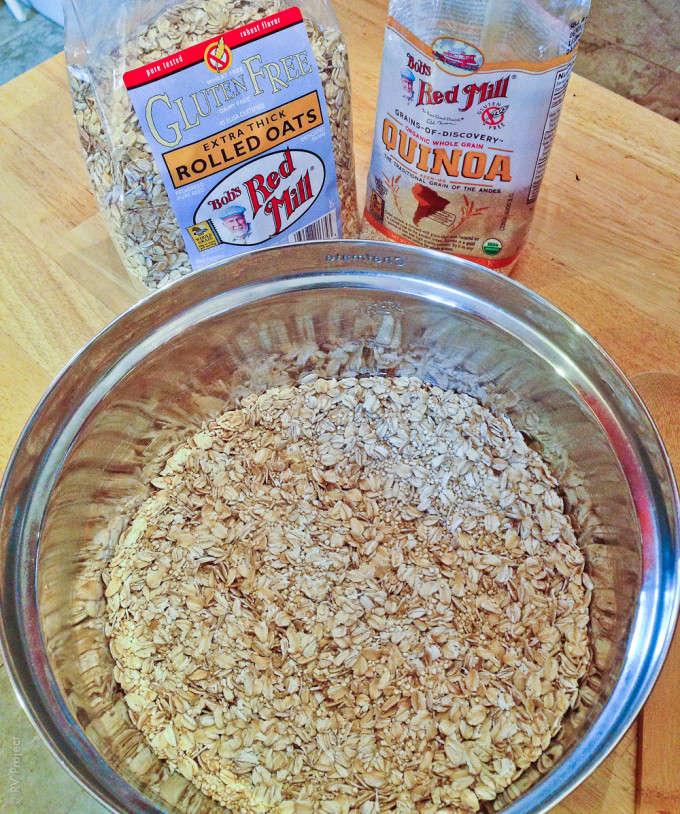 The main ingredients! The quinoa adds variety, nutrition, and a nice crunch. 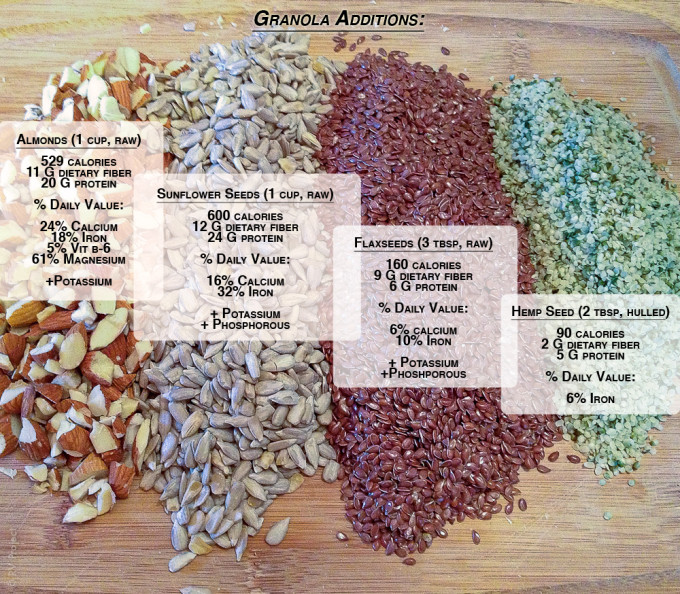 With the right ingredients, your granola will be guilt-free, good for you, gluten-free… I think that covers all the gf’s.

4. Spread onto the {parchment-paper-covered} baking sheet.

Let it cool before adding in dried fruit and chocolate. Of note, the granola will not feel cripsy until it cools. 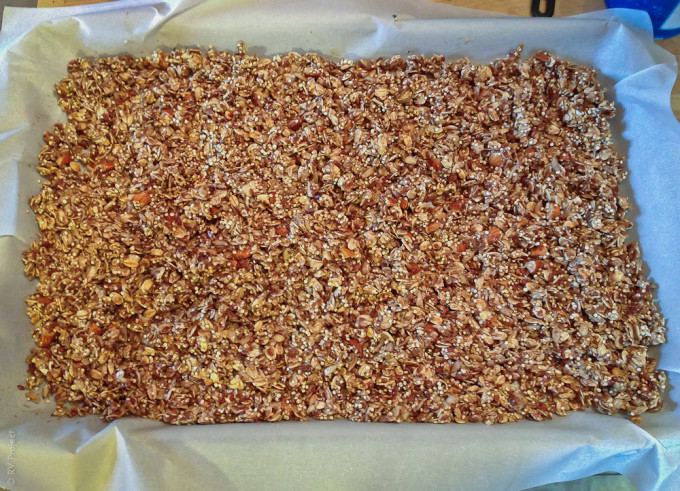 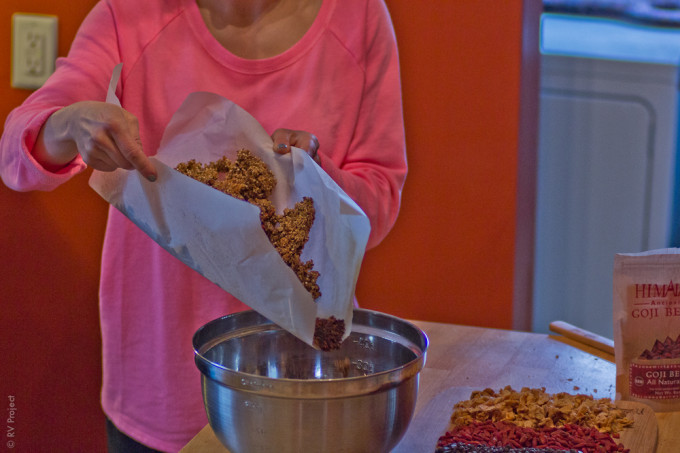 Another reason that parchment paper is worth the waste. 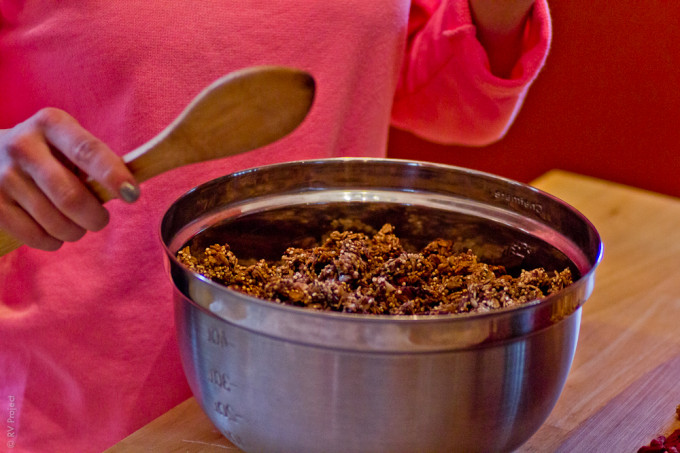 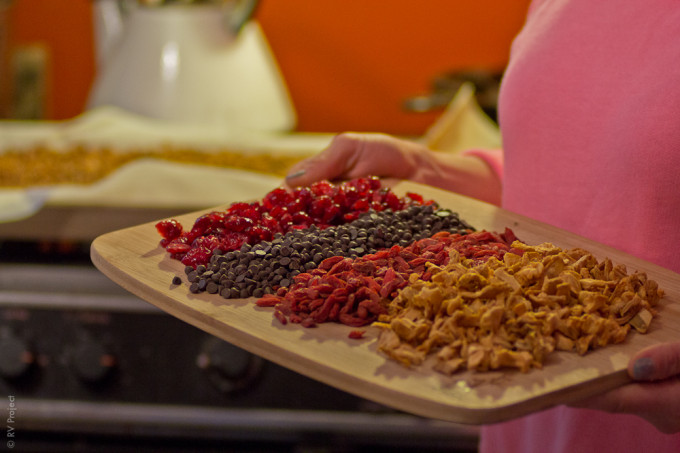 How can you go wrong with dried cranberries, (soy free) chocolate chips, Goji berries and dried apple chunks? You know the answer.

Recipe adapted from Buzz Feed’s article you can find here.

We wrapped up filming for Alex’s birthday challenge a few days ago and are now back in the Bay Area, staying at Spenser’s parents house for the next week or so. Not gonna lie, we are both thankful to be finishing up the food challenge in a house with a kitchen! Vegas left us downtrodden and in desperate need of a recharge…