It’s truly hard to believe that we’ve been doing this travel/climb/document thing for over 3 years now. Year 1 was a bit of a dizzying doozy. Year 2 was when we first stepped into the world of semi-professional media. Year 3 was the year of Shit or Get Off The Pot.

Year 4 is the year of Love. Jumbo Love.

For the past 4 weeks, we’ve been living at Casa Mike in Las Vegas. Ethan, Georgie, Vikki, and myself are here with the main goal of going up to Clark Mountain and filming Ethan on what is arguably the hardest sport route in North America, Jumbo Love 5.15b. Side goals include Georgie sending 1000 Churches 5.13a, and myself sending Jumbo Pumping Hate 5.14a, both at Clark’s 3rd tier.

Everything about Clark is bigger and badder.

We are out the door by 8:30. It takes a bit less than an hour to get to the Yates Well exit, and another 30-40 minutes to drive the infamous 4×4 road to the parking lot. The Third Tier (AKA The Monastery, not to be confused with the several other crags with the same name) is less than a mile from the parking lot as the crow flies, but the hike takes about 40 minutes. The first section is an uphill trail of increasing steepness, leading to the First Tier. A fixed rope and some scrambling gets you to the Second Tier, and another scramble and some more loose scree brings you to the big ol’ cave at the top, 1500′ above the car. Before hiking back down at the end of the day, we stash our leftover water at the cliff, because water is heavy.

It’s usually around noon by the time we’re ready to start climbing. There is one route rated 5.10d, a handful of 5.11s, and many long, steep, and burly routes 5.12-5.15. The .10d is not terribly long, but even it is immediately intimidating: it starts on a ledge and heads into outer space, with the ground immediately dropping away. Thankfully, the holds are better than the jugs on the 5.7 at your local gym. 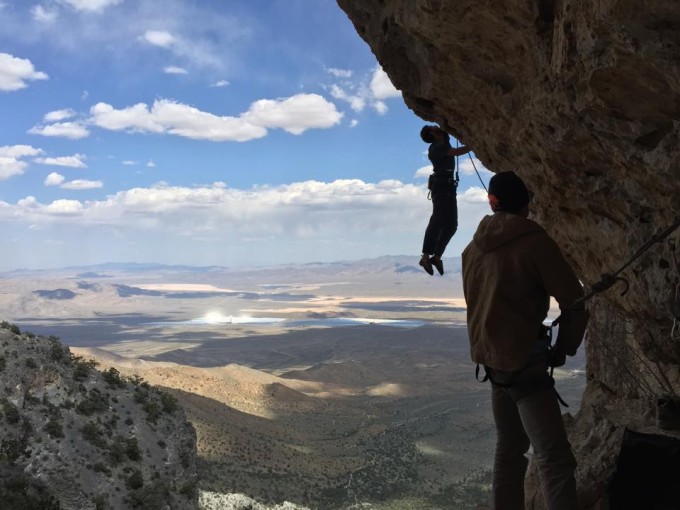 Daniel Fineman took some time away from the Touchstone gyms to come check it out. Here he is, Stallone-ing on the warmup.

For the first few trips, we were busy rigging ropes and trying out different methods of filming Ethan on the route. Because everything up there is such a to-do, even traversing the base of the cliff, simply hopping on routes to get mileage is no picnic. We spent most of that time getting various rigging chores done, and getting quite scared in the process. The result, so far, has been some great footage, the removal of some rather scary fixed gear, and a poor-man’s cable-cam idea that didn’t quite work as planned…but that was REALLY fun to rig!

There is one other factor that makes Clark days subtly tiring: there is virtually no flat ground. Simply walking from one end of the ledge to the other, or wandering away to relieve oneself, demands attention. One can easily slip and end up with hands full of scratches and/or cactus thorns. It feels like you don’t ever get to relax.

But What About Jumbo Love?

Ethan’s been trying Jumbo Love since before it was Jumbo Love.

It’s quite difficult to describe exactly how intimidating the route is, but I got quite a good visceral sense of it one day when Walker Emerson and I hiked to the top of the cliff (an extra 35 minutes) to fix a line and rappel to the ground. The wind was whipping. Because the ground drops away from the base of the routes, the air under your ass feels infinite the minute you set off on a climb. The cliff dwarfs any normal-length rope. Walker and I rappelled from the top of the cliff (where Jumbo Love finishes), down what is normally considered an entire pitch just to get to the 2-bolt anchor at the lip of the steepest part of the cave. From there, it’s another 50m to the ground. I death-gripped the rope below my Gri-Gri for the two hours it took to get everything set, and even Walker, with many free-hanging rappels thousands of feet up on El Capitan under his belt, was terrified.

Jumbo Love begins with a pitch of 5.12d, which ends at the ledge that Sharma famously stands on. From the stance on the ledge, the route traverses to the right for 20 feet or so before launching into the steeps: 14 bolts of unrelenting 5.14 with only one marginal rest and many, many boulder problem cruxes. The movement on the route looks spectacular, with many heel-hooks and dropknees mitigating the load on the arms. Of note, too, is that Ethan manages to use all of the holds that Sharma famously monos, but with multiple fingers.

Watching Ethan slowly chip away at the route has been incredibly inspiring, at times difficult, and downright impressive. Though we’ve gotten very close over the past 10 months or so, and going out and climbing/filming some of the hardest and coolest climbing in the world has become commonplace, I will always retain that awe that comes from watching one of the best climbers in the world testing himself against one of the steepest and blankest pieces of stone to ever have been climbed. The emotional highs and lows that accompany his slow but steady progress are fascinating to witness.

Personally, I’ve gained a lot by seeing the process in action, and applying the lessons that I learn from watching Ethan on my own project at Clark. On day 1, Ethan went bolt to bolt. He did most of the moves, and made some good links on the route. After a couple more sessions, Ethan began linking through the bottom crux. Last week, he hit a major milestone by climbing through the first crux, falling later, then pulling back on and climbing to the top for his first (ever!) one-hang. He notes that he feels a little more comfortable on each little sequence every time up the wall.

This time around, he’s not the young and cocky prodigy he was in 2007. Ethan has, it seems, matured into a much more patient and thoughtful climber, evidenced by the fact that he feels much more secure on the final headwall of the route, an “easier” but more insecure section that still checks in at 5.13+ in its own right. 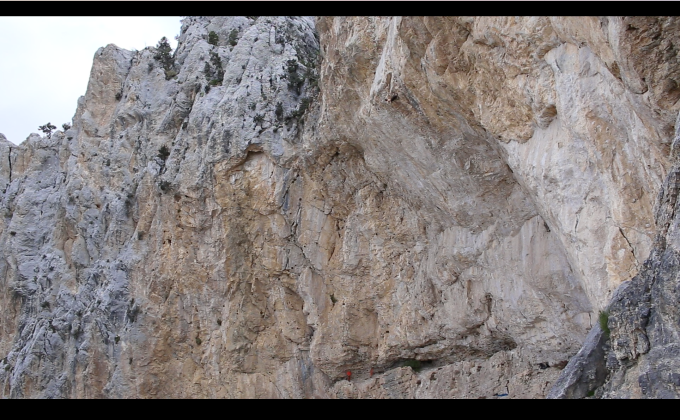 Try to find the tiny Ethan, resting at the lip. 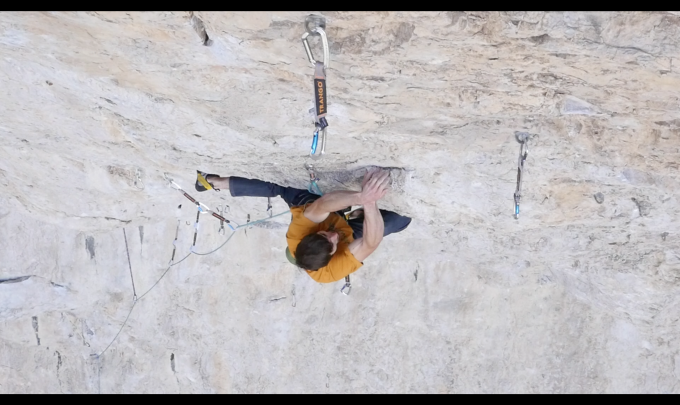 Ethan working through one of the hard sections that isn’t the crux.

It must be truly difficult for Ethan to decide to go up to Clark on any given day, knowing that he likely won’t send it that day. It’s one thing to have a big project, like restoring a car, where there’s a clear path to success and a checklist of to-dos. On something like Jumbo Love, one has to be ready to try as hard as possible every time. One has to celebrate the small increments of progress. One has to try hard, yet be prepared to fall before getting close to the top. One has to be able to stay psyched to keep hiking all that way to try the route, with no guarantee that there will ever be an end to the journey.

As for my project, I didn’t get to try it until our 4th day at Clark. The route begins with the same .12d intro as Love, but takes a more leftward line of pockets and huecos through the steeps. A V5-ish intro to the roof leads to a series of incredible jugs and underclings through the middle of the roof, culminating in a V7-ish boulder problem which comprises the crux. A few jugs and one last hardish sequence follow, with some outtro jug hauling for the final three bolts. 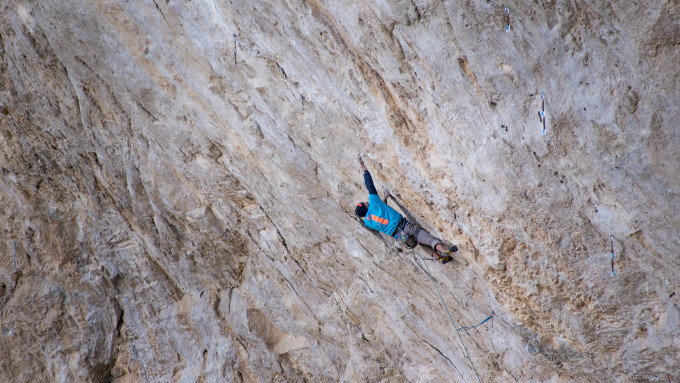 My first time on the route was eye-opening. I thought I would be bold. After all, it’s just bolts, right? Yet I found myself grabbing the first hold on the roof, a full-hand jug, and realizing that I was holding on so hard that I couldn’t move off it. I tilted my head back: I saw 100 feet of imposing stone, with a few tiny-looking quickdraws desolately swinging in the breeze. I think I grabbed every quickdraw on the route that day. When I got to the crux, I touched the holds but couldn’t bring myself to throw for the move.

A week later I was back on the route, and I finally went for it on the opening moves of the steep part, falling a good 25 feet to below the ledge at the end of the .12d. I linked several moves along the way to the crux, and then I finally convinced myself to try hard on the big throw move. I stuck it. I did the next move.

Suddenly, I knew it was possible. So did Ethan, who told me he had bad news: I can do it. (Why this is bad news: suddenly, it’s a real goal, and now I have to try really hard!) Of course, I have to climb a lot of steep terrain before getting to the powerful crux, and I’m very worried that I simply don’t have the fitness to get to the crux without my arms feeling like overcooked spaghetti. But we’ll see. I went up and replaced all of the fixed draws with newer, less faded, and less sharp ones. I’m ready to give ‘er.

We’ll be here until A) Ethan sends or B) It gets too hot.

Until then, here’s a little teaser.