The climber, facing away from the wall, gingerly peers over his toes to watch his sky-blue T-shirt flutter to the ground. He takes a deep breath, then turns in place on the 4-inch ledge on which he’s been standing. Now facing the wall, he unclips from the anchor and begins a precarious rightward traverse. 15 delicate feet later, he clips the rope into a quickdraw more in line with the rest of the bolts. He draws another deep breath, and pulls into the start of a 110-foot long roof.

So begins my absolute favorite segment of climbing footage. It doesn’t evoke the adrenalized, finger-tingling, animalistic urge to grab something overhead and freakin’ pull down like most videos of hard climbers climbing hard. It’s more like a good surf film, in which a fragile human is calm and poised amidst the violence and chaos of forces we can’t comprehend. It’s simultaneously serene and exciting, and I can’t look away.

He’s nearly horizontal, but his face is completely relaxed. He doesn’t seem to be climbing so much as gliding between ripples in gravity’s field, now relaxing and taking a breath as the next hold makes its way to his hand. He is a virtuoso and the rock is his sheet music. We don’t listen to the notes, we feel the movement swell.

The camera follows the climber, uninterrupted, for about 30 minutes. I’ve watched it countless times, and on every occasion I feel transported by the rapture of a perfected performance. It features a close friend, but that only explains how I have the footage. 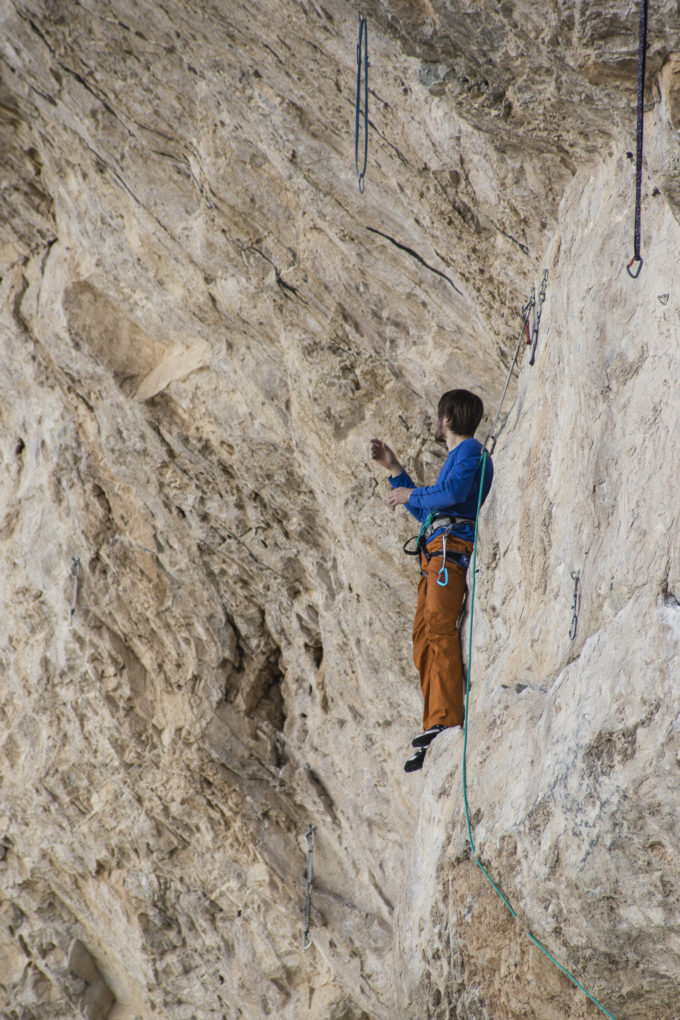 Better than most rests, but still not very relaxing.

The footage I’m describing shows Ethan Pringle climbing Jumbo Love, the hardest sport route in North America at 5.15b (Alex Megos’ Fight Club in Canada recently became a contender). We dedicated our 2015 spring season to joining Ethan at Clark Mountain, and filmed 36 tries on 17 days over the span of 2 months.

He’s climbed 1/3 of the way through the severe, spartan overhang. He doesn’t yell, or grunt, or even breathe heavily. His face betrays no sign of exertion, even as his feet fly off the wall during the first crux. He’s done this move enough to know every nuance of the swing. He waits for his body to reach the apex. As he swings back toward the wall, his right foot extends to land softly on a foothold. He releases his right hand, and before extending it for better holds, gives it a laconic shake. 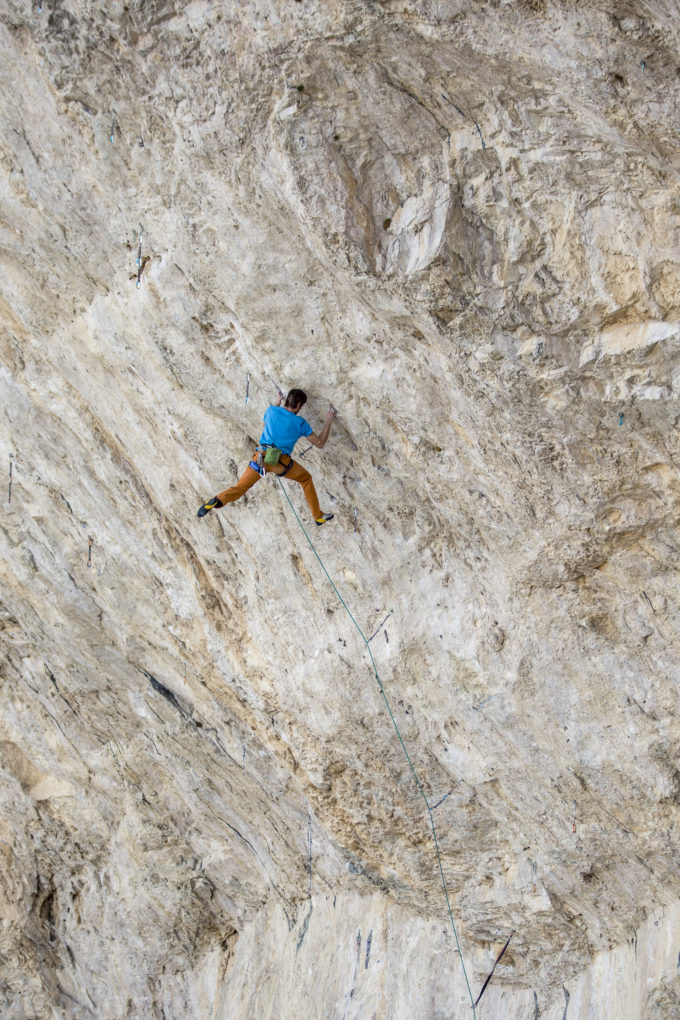 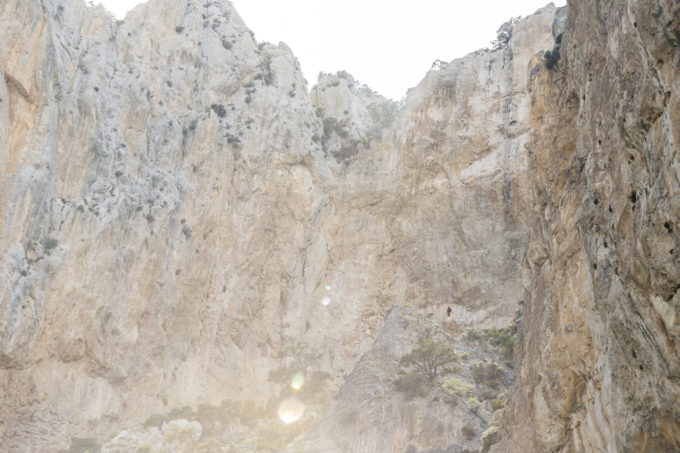 The 3rd Tier, from the 2nd Tier. There’s a little Pringle on the wall…click to see this in full resolution.

It’s hard to imagine a more intimidating wall than the one that Jumbo Love ascends. There is nothing in Las Vegas’ display of gaudy architecture that even compares. It’s like an upside-down football field of ivory-white limestone looming over you at a 45° angle. The 110-foot-long steep part – also the hardest part – is bookended by 75 feet of moderately overhung 5.12d at the start and 100 feet of insecure, technical, gently overhung 5.13+ between the end of the roof and the top of the cliff. To add to the wild exposure, the ground falls away as the route ascends, so that when Ethan reaches the good holds at the end of the roof, his ass is 200 feet off the deck.

Sinking his left hand into a pocket, he jerks his left arm a couple of times to get his 3 fingers deeper and more secure. Then a breath, 2 more moves, and he’s through the second crux. During previous attempts, this sequence of 3 big moves had Ethan screaming, and often falling. Now he looks like he’s warming up. Suddenly his foot flies off unexpectedly – upon review, we can see a tiny flake has broken – but a million neural calculations happen in an instant and his body absorbs the mistake like a pond absorbs a raindrop. 10 more moves and he’s 200 feet from the ground below, hanging from a good hold and alternately shaking out each arm.

Conspicuously absent from the performance is any trace of fear, any hint of doubt, any indication of the sacrifices made up to this moment. If he’s stressed, he’s not showing any signs of it. He has the face of a man focused intently on the instant that we call NOW. He is the gymnast mid-routine, the skier riding out a steep couloir. He isn’t doing, so much as allowing to happen.

On one hand, my perception of the footage is colored by our deep, emotional involvement in the project that season.

On the other hand, I’ve been watching climbing, on screens and in person, for 13 years, and I have never seen anything like this. 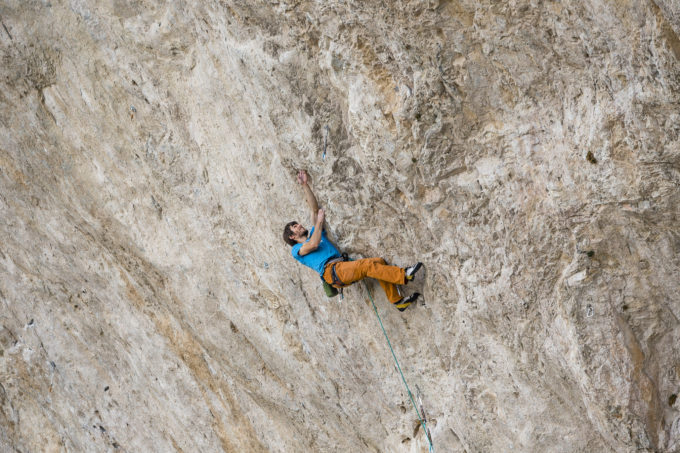 Ethan cruises V7 moves in between V-double-digit cruxes. (This is quite a language we have in climbing, innit?) 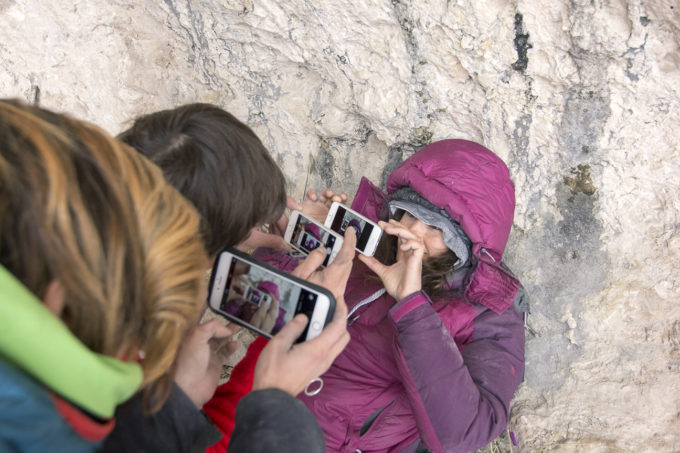 I know! Let’s play with the concept of infinity!

Ethan moves off of the good holds to begin the last 100+ feet of climbing. The hardest part is below him, but falling is a real possibility at any moment on the slick, sparse headwall. A hard section comes immediately after the angle change. He pulls through it like it was 5.8, instead of his estimate of V8. He matches hands on a diagonal rail and for the first time in 15 minutes is able to stand on his feet. He lets out a primal scream. 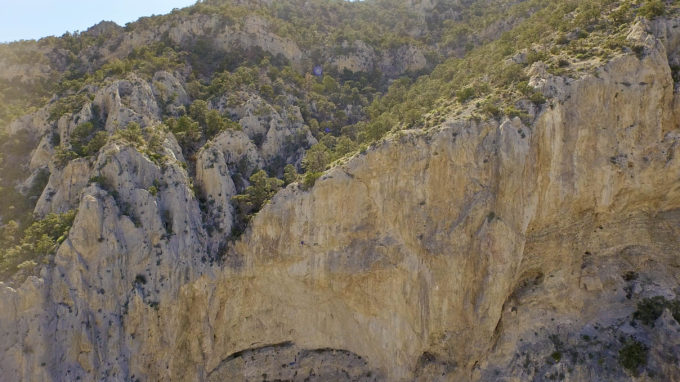 There is a little bitty Ethan on that big ol rock.

At the start of the season we were unprepared and inexperienced. We knew that the project was risky: the weather could turn, Ethan could lose psyche, and, on top of all that, this was a 2nd ascent. (To hear the way our friends and colleagues in the climbing media world talk about 2nd ascents, you’d think they come with a melted fudge-cicle and Stage III syphilis.) We approached the project as a learning exercise, an advanced seminar in adventure documentary.

In addition to the 2 months in Las Vegas, we spent countless more hours in post-production. Between licensing footage for a film and selling a few photos, we made about enough money to cover our costs over those 2 months. We weren’t able to pay ourselves for our time, during production or post-production.

This isn’t meant as a complaint, just information for anyone interested in how the sausage is made. 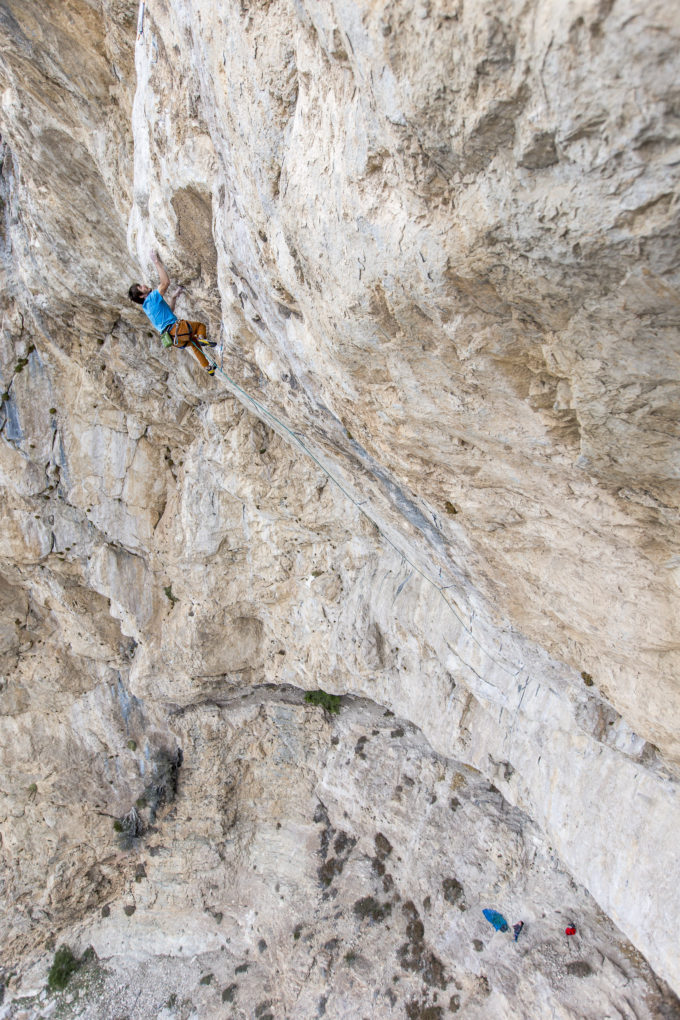 He’s at what looks like an awkward stance, alternating hands on the rock while shaking the loose one. By itself, this part is boring to watch, but what must be going through Ethan’s mind? 40’ from the top and over 200’ from the bottom of his nemesis route, on easier but still insecure terrain. I lean in, hunting for signs of elation, or exhaustion, or anxiety, but his face only shows the same laser focus that got him this far. I feel like I’m watching someone going for a record in consecutive free throws, where a simple act is imbued with unbearable tension, and the tiniest miscalculation can ruin perfection. What if he were to fall now, after having already done so much hard climbing? How would he feel?

We know why we didn’t get rich from the Jumbo Love project. It was a passion project. An article in the Climbing Business Journal, using a recent film by our friends Just Go Climb and Andy Wickstrom as a case study, describes it fairly accurately:

[The] passion project. These videos often stem from close relationships between filmmakers and pro climbers and get made with modest funding. The film in [sic] an investment in the pro’s brand and a showcase of the filmmaker’s creative and technical skills, but is often not financially profitable.

That last paragraph begins to take on the question raised by the title of the article, then abruptly dismisses it with a, dare I say, Trumpian assurance that everything is wonderful. The concluding sentence would be equally accurate if the word “great” were replaced with “uninspiring, dry, and insultingly bad.” To me, “great content” is original, compelling, and above all, respectful of the viewer’s time (and I should add that The Golden Ticket is one of the good ones). You’ll see a climber pulling on their xXBrandXx shoes and dipping into their xXSponsorXx chalkbag in nearly every film, but has it ever moved the story forward? (No wonder that Mowgli guy isn’t a poster-child…)

The footage of Ethan sending Jumbo Love is deeply moving because it captured a moment in time, a singular display of perfected kinesthetics isolated from the nasty, brutish machinations of dead-eyed bean-counters and their excitable lapdogs, the Marketing Strategists. It is raw, it is vital, it is of little commercial interest, and that’s exactly what makes it important. 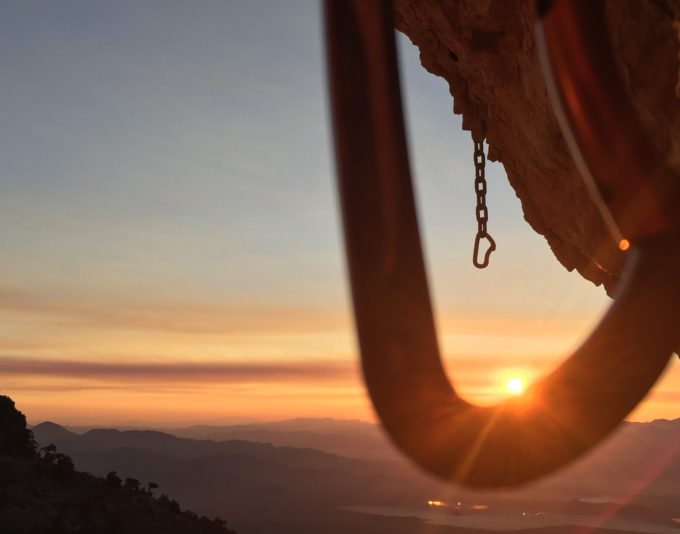 The sun rises over the solar array.

The zeitgeist of the Content Creator Community is that we devalue ourselves by giving away our work for free. Kinda “duhh,” right? Says our friend and colleague Anthony Lapomardo,

Generally most climbers [expect] free due to the mass proliferation of amateur content on YouTube or Facebook. And the magazines also played into that [by] not supporting photographers and falling to Instagram to buffer their online presence with free reposting of work. …whenever anyone says anything should only be free I would like to walk into their work and ask for the same.

On the flip side, we want to share the stoke with our extended family – the climbing community – and help give Ethan’s ascent the attention it deserves. How, then, do we square this circle? 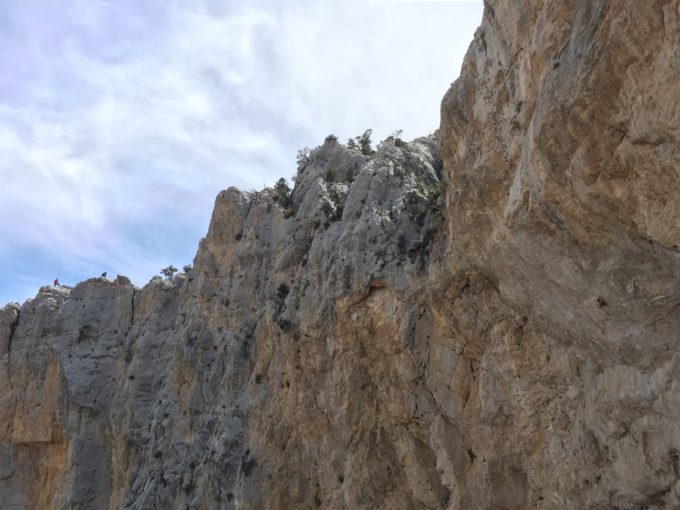 I’m up on the pinnacle in the left side of this picture. I spent a lot of time there.

Occasional whoops and shouts emanate from below. Now just a body length below the summit, Ethan cracks. He puts his hands on the rock and his head on his forearms. His shoulders, which look like they could support a camel and its entire load of straw, begin to quake. He is 6 feet from the end of an 8-year journey.

This, then, is an attempt to balance the conflicting objectives of sharing a stunning spectacle with as many people as possible, and making money as filmmakers:

Here is the route from bottom to top, with the entire roof and headwall portions completely uncut, for free. Touchstone Climbing deserves a big Thank You for working with us on this release. Watch it with your favorite music, or enjoy the ambient sounds from Clark Mountain.

Largely because this is exactly what we would want to see after a mega-send, we convinced Ethan to sit down and record a conversation, sort of a “Director/Climber Commentary.” We believe it adds a layer of color and insight to the footage, and makes watching it even more engaging.

The video with commentary is available for $3 through Vimeo on Demand. We hope you’ll agree that it’s worth at least that much. If nothing else, you’ll be supporting filmmakers directly.