I’ll always remember our first trip to Joe’s Valley. We were young, fit, and couldn’t wait to get our hands on that dyno-happy, skin-friendly, streaked, pocketed sandstone. It was even better than we anticipated. We climbed and camped and ate giant steaks and drank palatable whiskey and burned firewood. We stayed for a month, loved every minute, and were back the next spring. 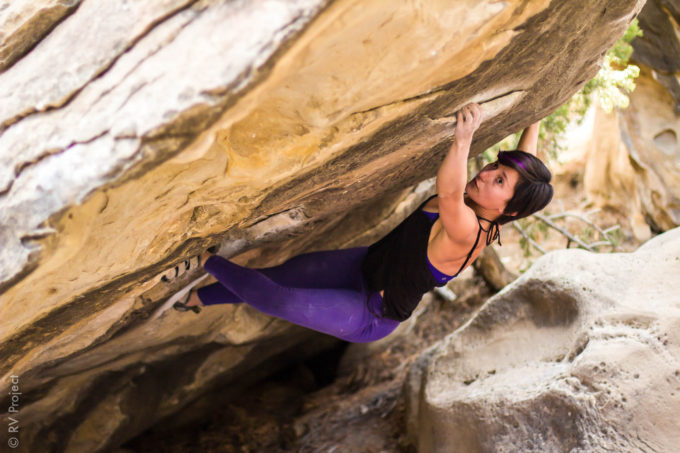 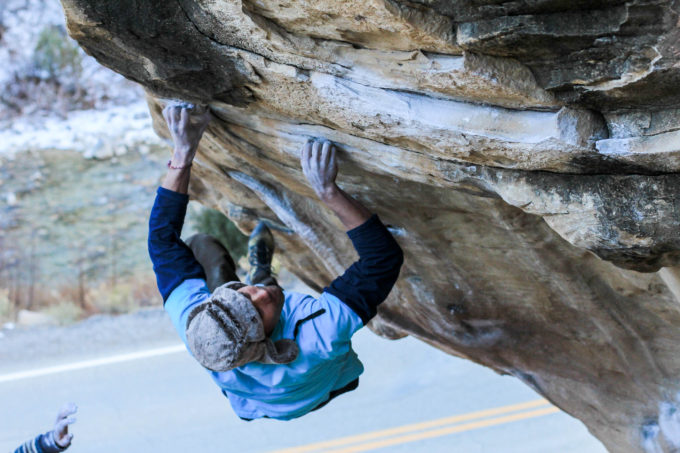 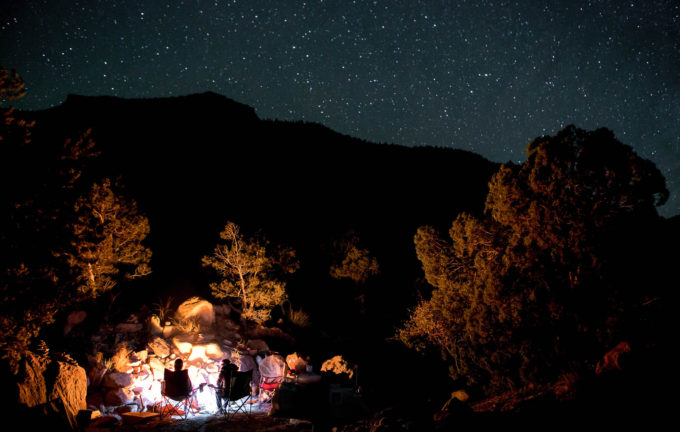 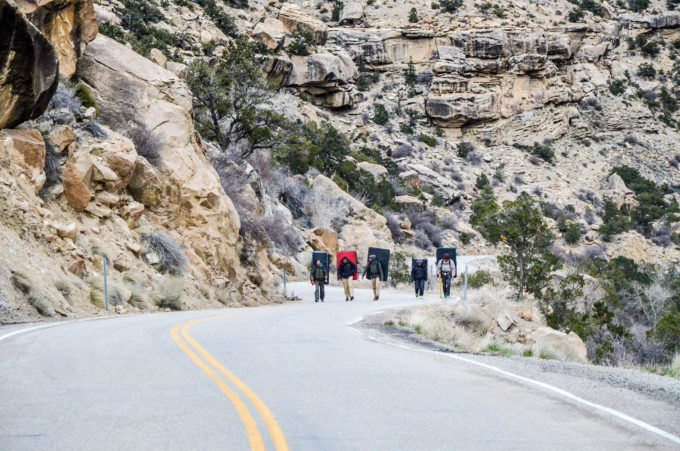 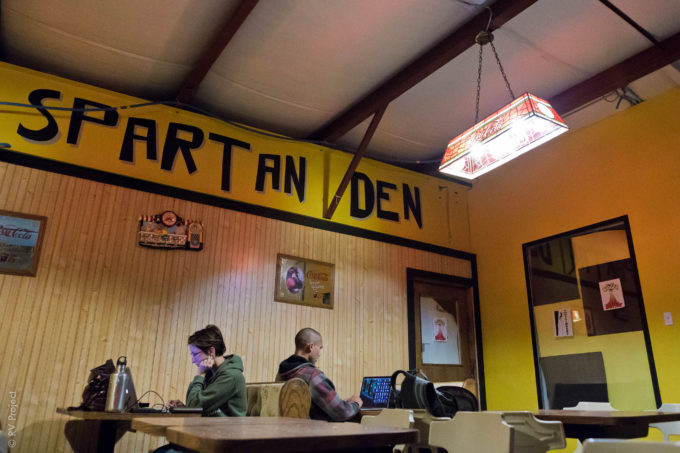 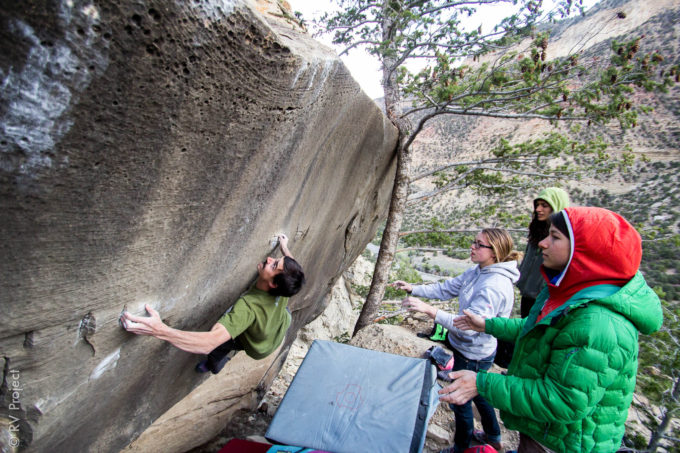 It was a mostly-off-grid existence punctuated by trips into town for fuel and sundries. Now, in a big city like San Francisco, even the loudest personalities can disappear into anonymity, but when the town doesn’t even list its population on the “Welcome” sign, new faces are hard to ignore. 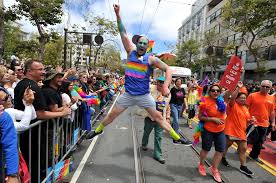 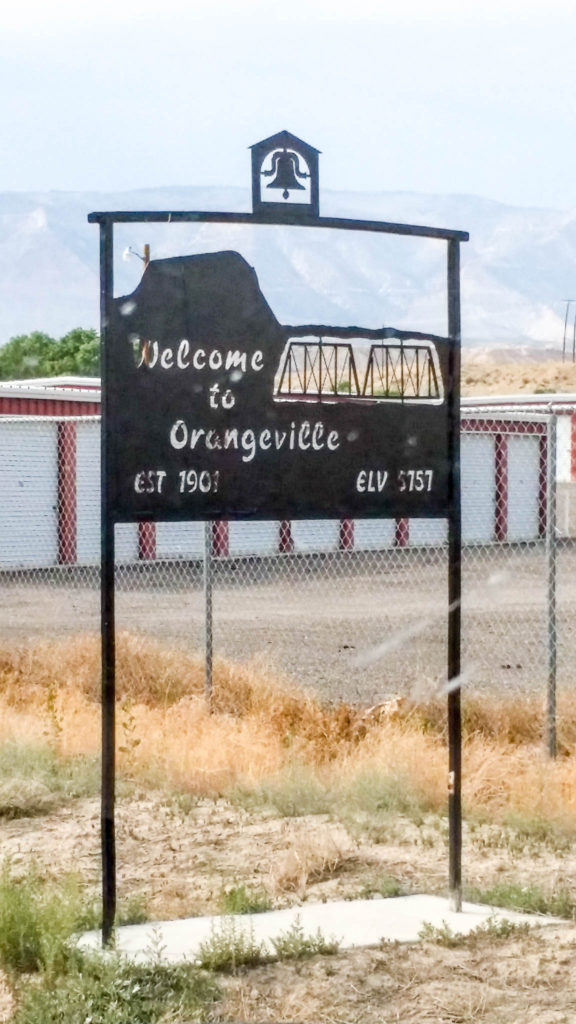 We were anxious about how the locals might react to our puffy-coated presences. We needn’t have been. Our California license plates drew comments, yes, but only about how clean their coal-burning power plant is, and that, without it, we’d be left praying for wind and sun 24 hours a day. We had no particular reply, and some subsequent not-quite-light reading was enough to tell us the picture is more complicated than any one person or interest group is willing to admit. In any case, it was very difficult to imagine something positive resulting from making our objections to carbon dioxide emissions an issue.

One fateful rest day, after seeing a sign on a bulletin board at the Food Ranch, Vikki and I and two other couples volunteered for a town clean-up in Orangeville. All 6 of us had spent varying amounts of time bouldering and camping in Joe’s Valley, and figured that showing up and wielding a broom would be a nice gesture.

Indeed, residents sat on porches and offered us lemonade, an elderly gentleman on an ATV handed out “Prairie Diamonds,” which are rings made of horseshoe nails, and the occasional driver would honk in gratitude. During the post-cleaning hot dog lunch, the six of us huddled together and stood out like, well, like a multi-ethnic group of climbers in a predominantly white town in central Utah’s coal country. A member of the Emery County commission approached us and began to ask us about climbing, and what climbers need in terms of amenities. 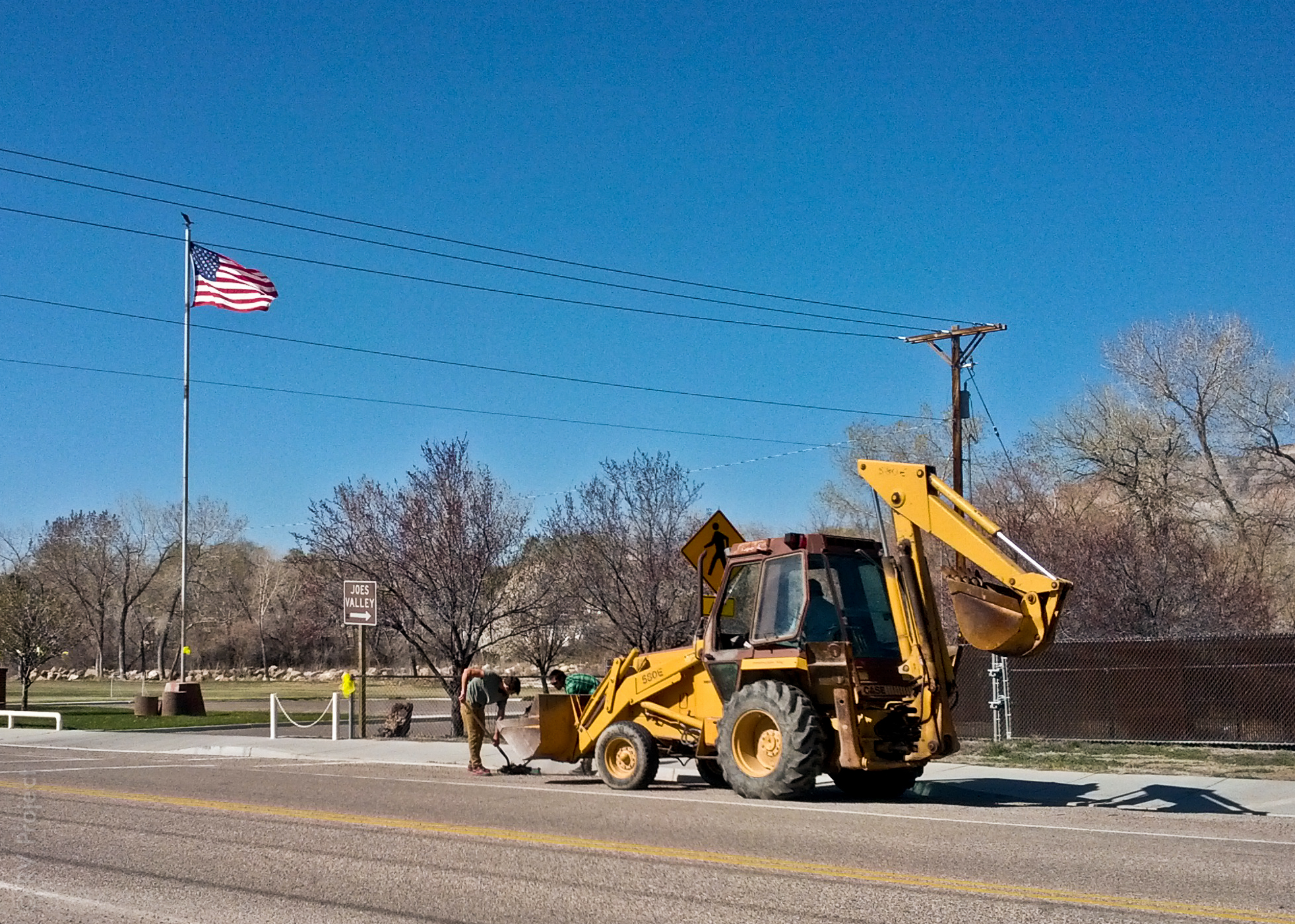 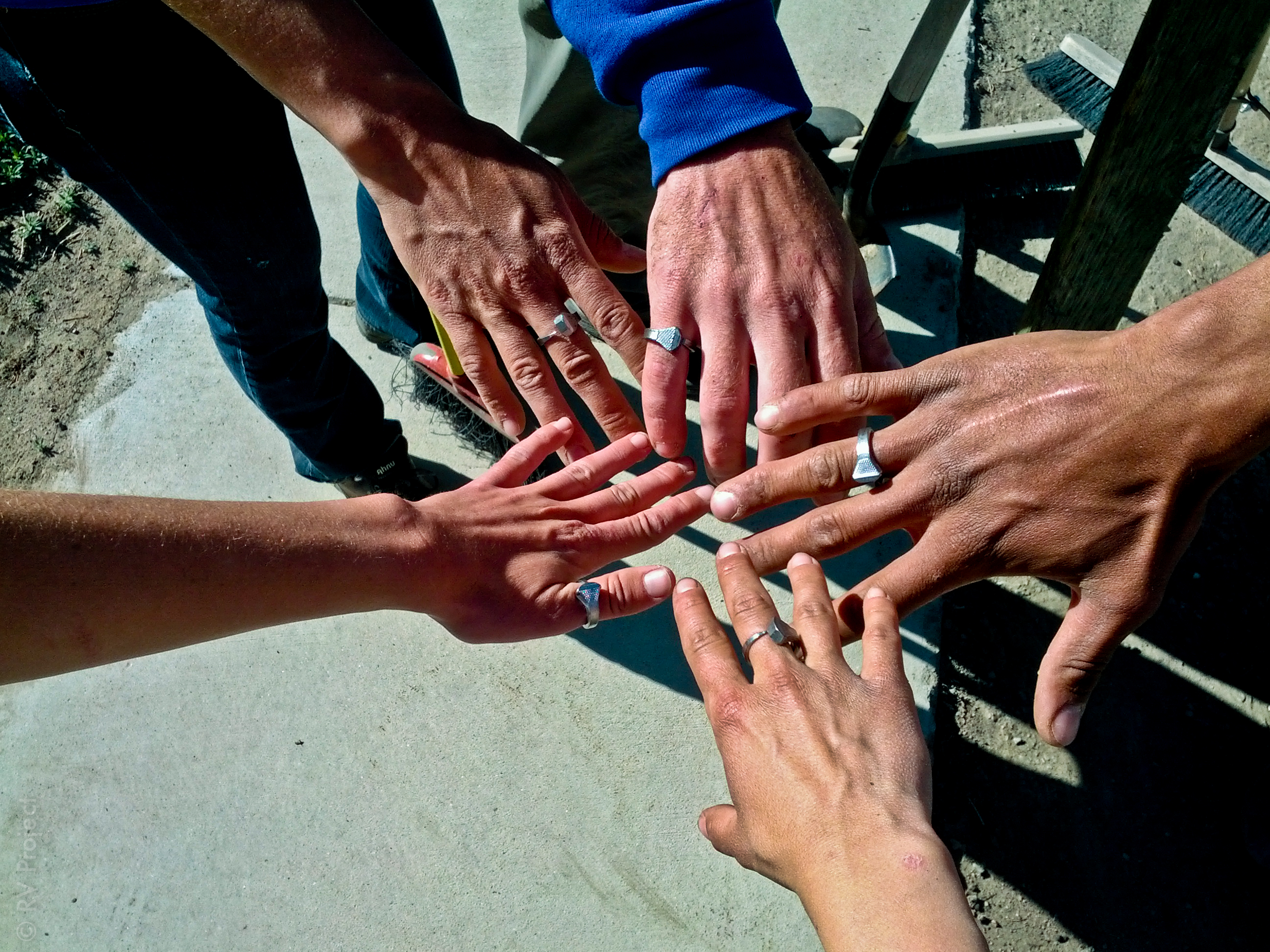 Let me pause to mention that Steven Jeffrey was among us, and Steven is a contender for having spent the most time around Joe’s Valley of any climber out there. It was Steven who showed Ben Moon the line that would become Black Lung. For an area with no local climbers, Steven is about as close to a “local” as one can be. 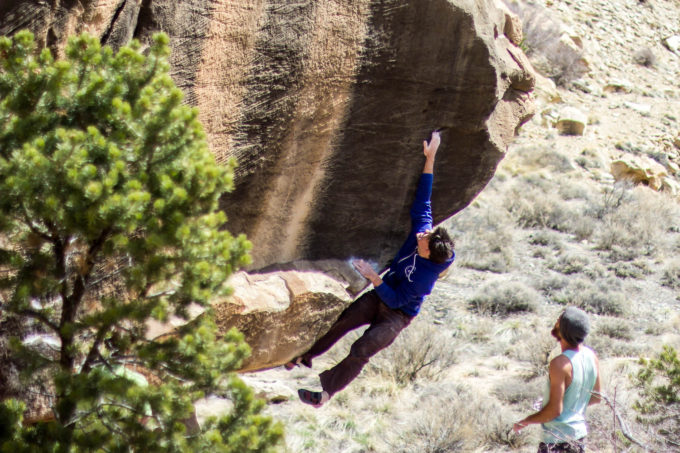 Steven Jeffrey on another of his projects, which Niko (right) ended up sending first.

As the conversation between us climbers and them townsfolk deepened, I got a funny feeling, like something big was starting.

(By the by, that link-looking header is a link to the Year 1 recap.)

Sometimes I read historical accounts and think, “There’s no way So-n-so deserves ALL the credit. Surely this was a large, collective effort, and So-n-so just has a catchy name.” Like Paul Revere: William Dawes did more than Paul, but Revere makes a better rhyme.

In the case of the Joe’s Valley Bouldering Festival’s inaugural event, it really was that simple. Amanda Leonard sent Steven Jeffrey a Facebook message, asking if they could start a climbing festival in Emery County. Steven said, “Hmm, let me talk to Adriana.” And his partner, Adriana, said “sure, that sounds like something I want to do.” Not knowing what she was getting herself into.

They had 2 months to plan. They reached out to us – the RV Project – and to Katie Boué for whatever help we could provide. And somehow, despite an absurdly cold forecast, a few dozen people bought the ticket and took the ride.

JVBF 2.0: Learning From Past Mistakes and Making a Few New Ones

To use the web-parlance of our times, omg. And here’s a GIF:

If Vikki were a muppet, this would be her this summer.

The biggest single item of news is that the JVBF became a 501(c)3. It was a huge headache and a not-so-insignificant expense, but it allows our sponsors to deduct their contributions. Ya hear that, Patagonia?

The second headline is that we grew. Bigly. In fact, we can call ourselves the biggest bouldering festival west of the Mississippi! (There are not very many bouldering-specific festivals, it turns out…) Because the Amanda/Vikki/Adriana team met to debrief right after the fest in 2016, we had a much clearer picture of how to bring together the sponsors, volunteers, athletes, and participants. But because the event was growing so much, the organizers found they had to put in at least a couple of hours each day throughout the summer to keep all of the spinning plates from crashing to the floor.

This is the point at which I, as an esteemed member of the Board of Advisors of the Joe’s Valley Bouldering Festival, heap praise and gratitude upon the Board of Directors (Vikki, Amanda, and Adriana). I had a front row seat, and the story unfolding this summer was an epic of long odds, unexpected roadblocks, and honest-to-goodness passion. I know it’s been said on this blog before but people hear this: putting on a climbing festival is HARD WORK. And I had no doubt that the women in charge of the Joe’s Fest were going to put in as many hours as it took.

The work more than paid off. This year, more locals than ever were participating. Asana donated a bunch of climbing holds to create a beginner wall on the Castle Dale community center, to go along with the Ninja Warrior-style salmon ladder. We had a bigger budget for better events (the Cowboy Games were off the chains, or, I dunno, out of the barn and unbridled?), even more raffle prizes than last year, and best of all, real coffee from Cup of Joe’s! 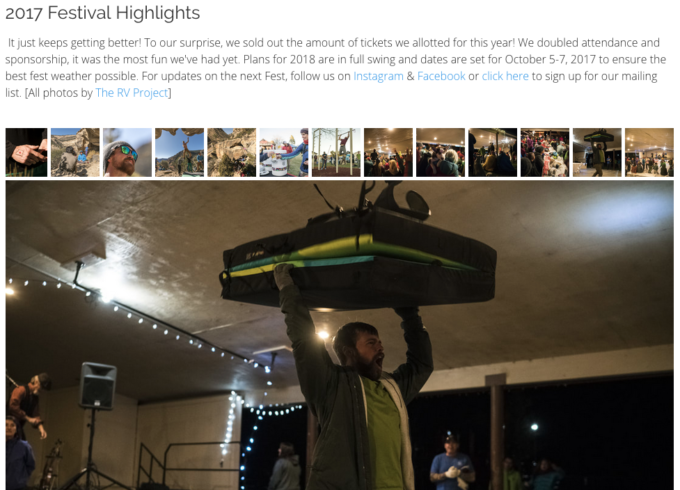 Click on the photo to check out our photo highlights from the Fest!

One moment left a strong impression on me. After shooting photos at Ethan’s clinic on Saturday, I rushed back to the community center to grab some photos of the sponsor booths (and a beer). As I turned into the cul-de-sac, it seemed like someone had cleared everything away and replaced it with a real climbing festival. There were no parking spaces. Dozens of people were sitting on hay bales and sharing blankets. Little plates of delicious (and healthy!) finger foods from (ironically) Fatty’s were in people’s hands. There were 15 sponsor tents, a 5-fold increase. There were several photographers.

When I found Vikki, I asked her a burning question.

“Remember when you guys spent months putting together a big climbing party in the middle of Utah, convinced companies to give you stuff, and then told people to pay money to attend? And remember when they happily did, and you unexpectedly had to tell people you couldn’t take their money anymore because the party was full?”

She smiled. Then, as an esteemed member of the Board of Advisors, I urged her to be really, really proud of herself.