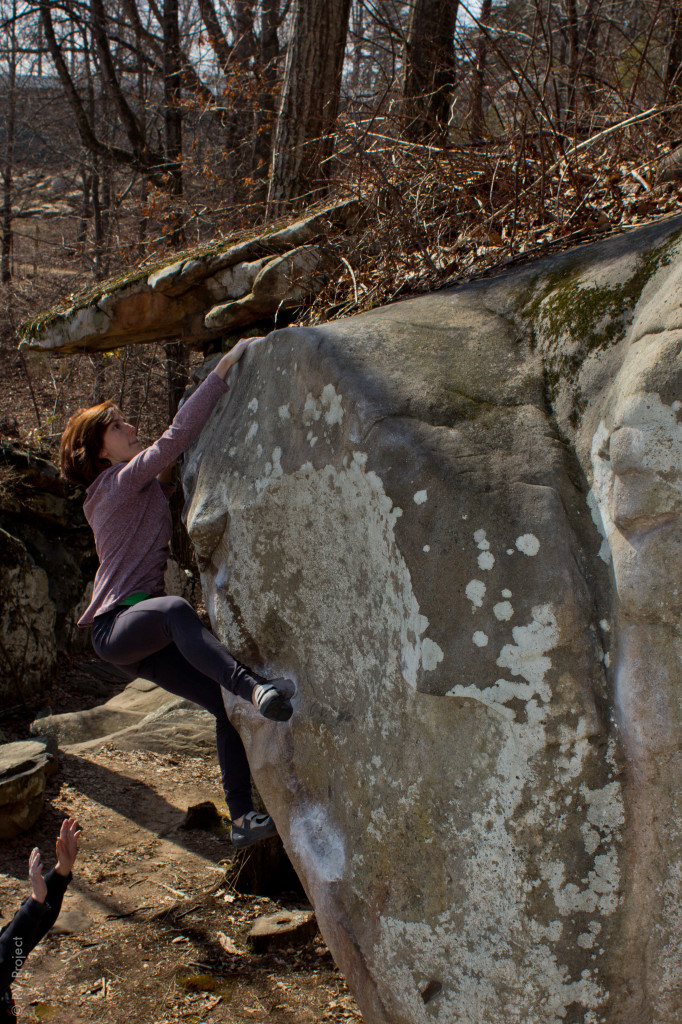 I’m finishing up this post from a café in La Jolla, CA, though the post began in Tennessee. We’re here visiting Vikki’s parents and simultaneously my grandfather, whose ever-fragile health is being gauged in every way possible by the health apparatus known as UCSD. Grandpa Tang is doing well, for now, but navigating the myriad hospital departments requires someone of youthful vigor. An advantage of our nomadic, unfettered life is the ability to help with family logistics at a moment’s notice, and it’s fortunate that we can get in a 2-for-1 visit.

Anyway, on to the climbings.

We came back from the Outdoor Retailers show with Renewed Vitality (the first in a series of new extrapolations for RV). It’s looking like 2014 is going to be chock-full of chalky videos, and we can’t wait to get started. Until then, we will be crushing our own projects, hopefully. (No promises, but I think we’ve got most of our existential hee-B-G-Bs out of the system.) 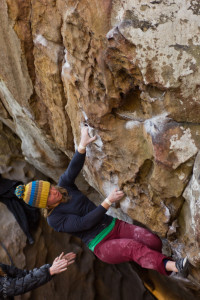 Rachel Belschner with a quick send of Super Mario (V4)

For Vikki’s part, she got back on her horse with some short-gal teamwork, working many Rocktown and LRC classics with our good friend Rachel. We said tearful goodbyes a week ago, and since then Vikki’s been trying hard with Courtney and Kat. She’s very close to her second ever V7, Jerry’s Kids, and more importantly, is finally healthy in the shoulder and finger zones.

Best of all, she just finished up her season-long project, Genghis Khan (V5) in fine style. It’s a classic to be sure, and one of the most popular of its grade at LRC. Multiple big spans made this a tough one for her, and it doesn’t let up until you’re on top. Maybe there’s something to this yoga thing she’s been doing after all! 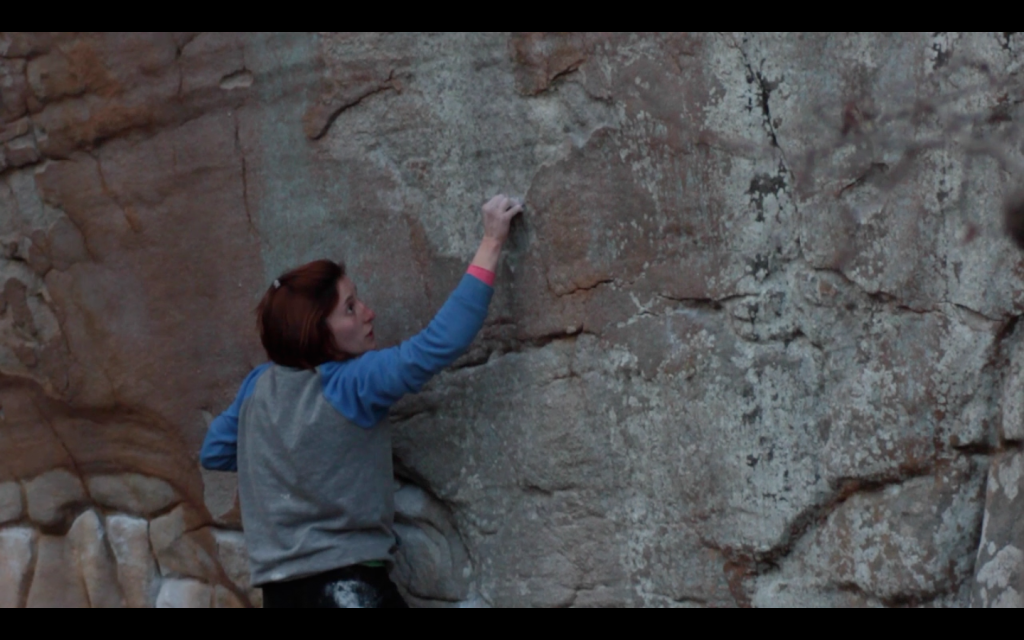 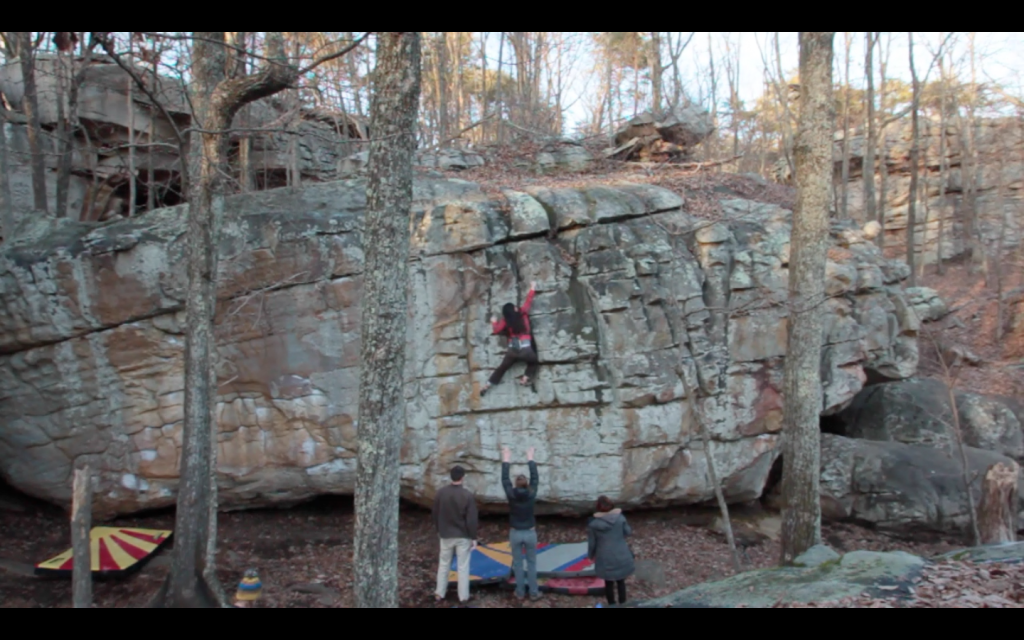 Courtney Miyamoto is returning to form. Here she is just before sending the V6 to the right of Jerry’s Kids.

I had one major goal this season, and that is to climb The Shield. I didn’t take the project very seriously at the start because I was scared of it. Not because it’s sharp or tall, but because it’s intimidating. It’s reputed to be the best and prettiest problem in America, and on a personal note, would be the hardest boulder problem I’ve ever done. An audacious goal, to be sure, but I’d been unable to use this anxiety as a motivator. Something about FEAR holding me back, False Experience Appearing Real.

The other day I did take a break from the project to attempt to climb 500 V-points (different problems). I got a bit of a late start and logistics weren’t properly worked out, but I managed to cram in 301 points before the sun went down. I seriously needed a break from repeated failure, and to smell the hundreds of roses littered around LRC. (A full report coming soon.)

Anyway, The Shield. At least a dozen days this season have included a trip to the back of the boulderfield to try this gem. The walk is familiar. The moment of heart-fluttering anticipation when walking around the corner and the clean, sweeping wall comes into view. I know the problem very well by now. Except what it feels like to actually climb the thing. You’ll have to ask Ian Cotter-Brown about that. 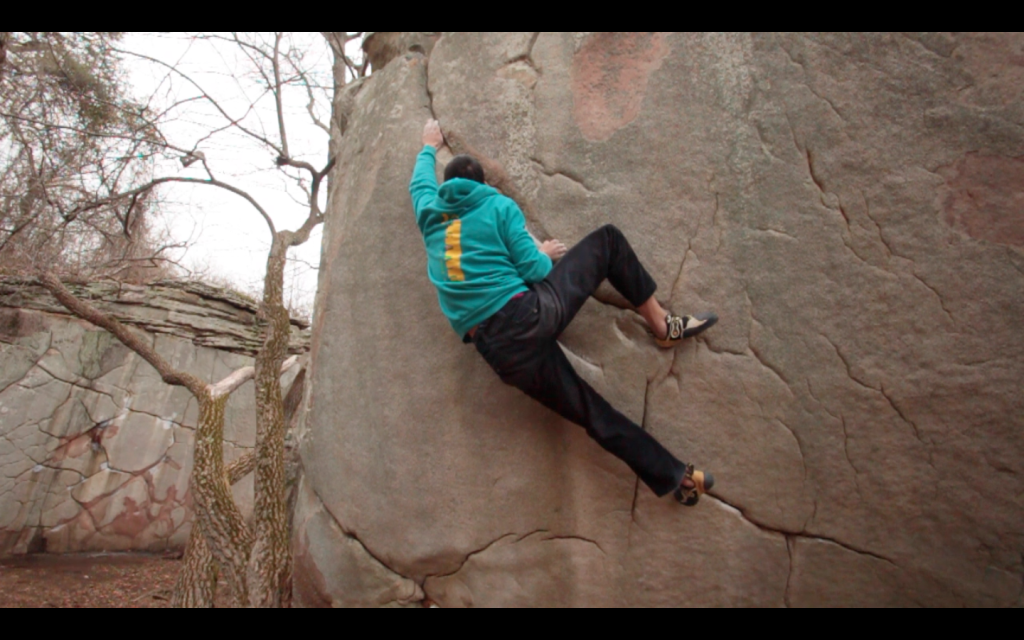 A screencapture of one of the dozens of video clips of myself hitting the hold and falling.

The problem starts with a 2 or 3 move intro to a spiky jug, then a couple of tick-tack moves to set up for the crux. The crux revolves around getting your right hand on a rounded peanut-crimp in a seam, and the left hand right above it. Both holds are subtly right-facing. Your right foot goes on the jug. You must stand up and press against your hands and feet to stab a vertical gaston with your left hand. Once that hold is gained, you stand up until your left hand is by your ear, bump your right hand through a series of left-facing gastons (pry the elevator doors open), and grab a good hold before hopping to a big jug marking the end of the hard climbing.

By now, I have probably tried the crux sequence at least 150 times, probably closer to 200. I don’t think I’ve ever tried a move this many times without succeeding once, and yet I feel closer every time. The routine is both comforting and tiresome. Pull on, set up, try the move, fall, visualize how the go went, brush holds, try again. Sometimes it’s solo, often with a visiting climber trying to piece it together, frequently with Vikki and some local friends there for support. This repeats around 15-18 times a day until my skin and fingers get sore from the routine.

Another Shield-friend came and sent after an epic week of attempts. Nice work Evan! 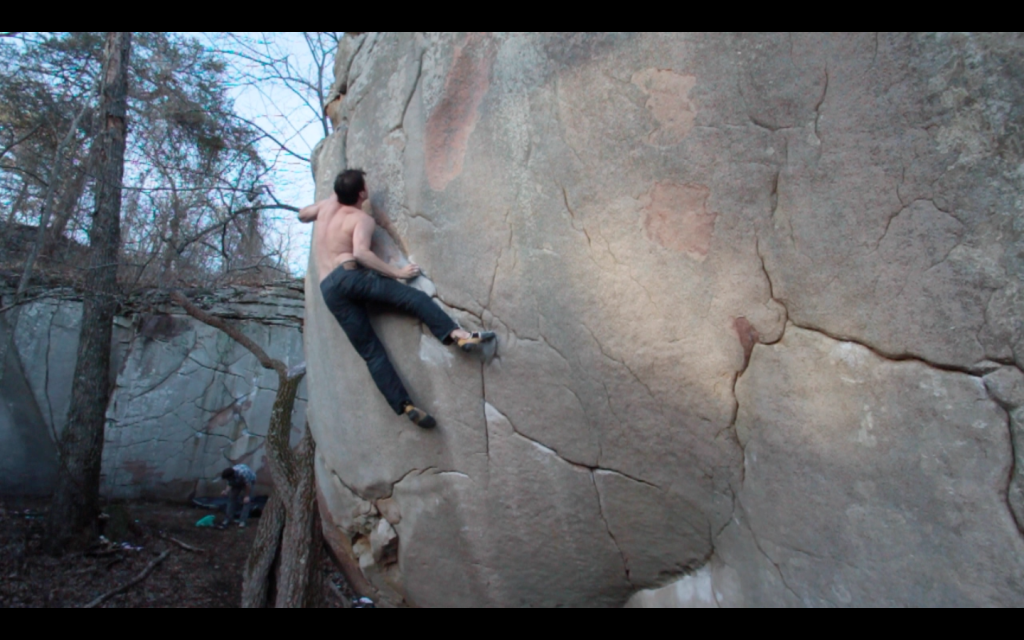 This is one of those projects that is causing me to question a lot of things. What is it about that one move? I’m pretty sure I’m strong enough, but maybe there’s something in my diet, or my psyche, or in my fingers that just won’t allow the move to happen. As climbers we can be models of positive psychology. We have long ticklists. We surprise ourselves and find ourselves on top of climbs before we even know what’s happened. For my part, I’m not much of an optimist, but I’ll even try it out if it’ll help. I’ve gone to The Shield with a positive mindset. And with a negative one. I’ve cursed, I’ve grunted, I’ve tried to literally crush the holds with my hands. I’ve breathed more and less and not at all, and the whole process is making me wonder what the major deficiency could be.

Despite all of these swirling emotions, many of them negative, I’m going to keep trying it. Like whisky, love, and procrastination, it’s irresistible, and something deep inside tells me the send might not even result in happiness. What the hell is wrong with me?

Unfortunately, I don’t have all the time in the world. The season is drawing to a close, and though we aren’t pulling the trailer west until after March 8th (when we’ll be in Atlanta filming Rock n Rave!). And who knows what the weather will allow for.

The other day I needed a breather from thinking about the project. I borrowed some dogs and jumped in the truck to go look for new boulders based on some Google Earthing. I found these. They’d obviously been found before…they’re on for-sale land, and I don’t know what the access situation is. If you wanna know how to find them, hit me up via the private channels, and DISCLAIMER, there’s always a chance you’ll get shot. But, definitely a couple of worthy highballs! 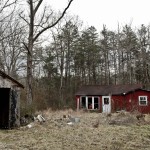 This is kind of a creepy area. 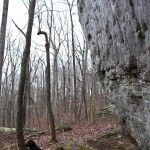 It also had the “curse” on the bottom bands of rock. 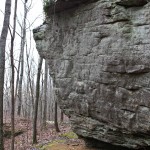 This mega-highball wall had cleaned grips and some obvious lines. 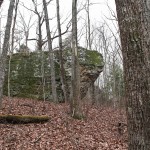 The prow is well-featured. 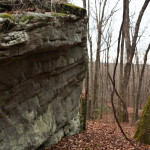 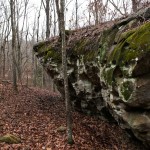 Lots of moss covering the easies. 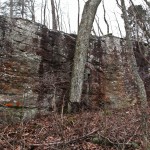 A totally awesome warmup wall. It just needs some cleaning and drying. 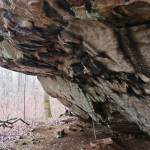 Sick boulder cave. Most of the development here is apparently by amateur archaeologists 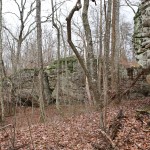 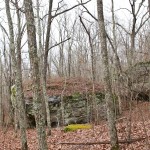 Lots of roofs here, but not much to be climbed in the roofs sadly 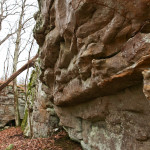 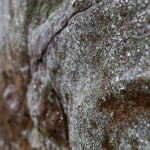 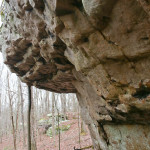 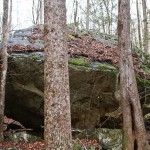 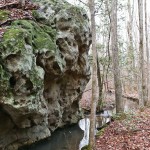 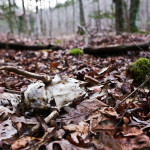